From Zimbabwe to the Presentation Sisters

Aletha celebrating her silver jubilee in Guruve with family and sisters c.jpg 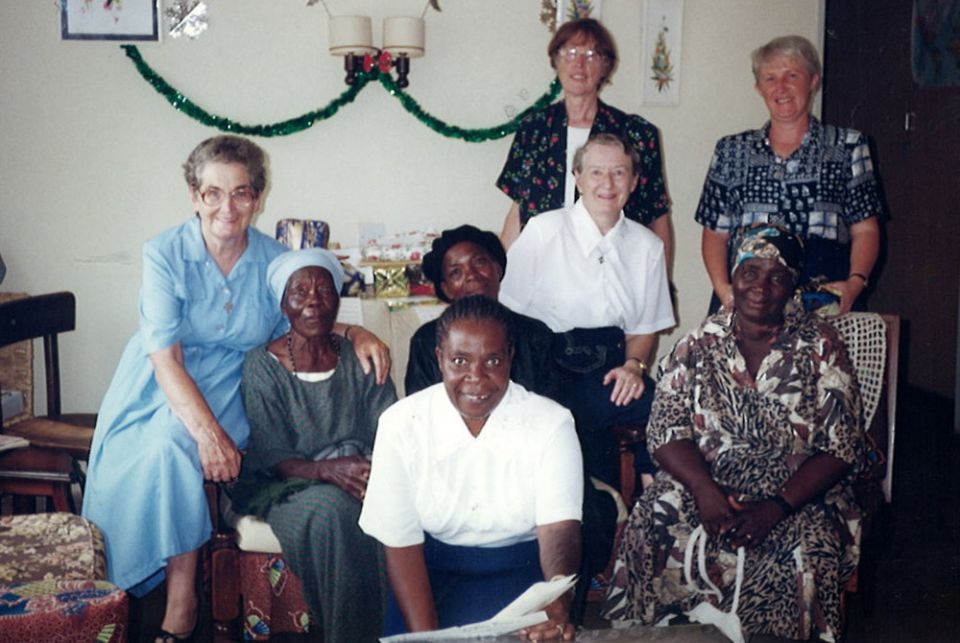 Zimbabwe was once considered the breadbasket of Africa, a country rising to prominence. It declined into poverty when its leader, Robert Mugabe, initiated a land reform that would return white-owned lands to Black Zimbabweans.

Decline and ascendancy have been common cycles for Zimbabwe. One was marked by a magnificent city, known as Great Zimbabwe or the House of Rock (the meaning of the Shona word "Zimbabwe"), built 900 years ago. It was so impressive that even though Westerners often argued that Africans could not have built it, archeologists — particularly Gertrude Caton-Thompson — proved them wrong.

Here I was born and lived my life. The first African woman to join the Sisters of the Presentation of the Blessed Virgin Mary, part of my story is about how my life was shaped by this ancient culture, and part by how I have navigated intercultural living for the past 47 years of my life. People often ask me what it was like to be the first African to become a Presentation Sister. There have been challenges, but I have had a happy and adventurous life and am proud to be a sister.

Born in 1942 into a Catholic family of 12, I lost three brothers to AIDS and one (at age 15) to heart problems. Zimbabwe was under British rule when I was growing up, so I learned English very young and started school when I was 9 rather than 7, because the school headmaster judged my age by how little I was.

Immediately after finishing [elementary school] I was invited to enroll in nursing at Regina Caeli Mission. I refused to follow my parents' desire that I be a teacher. But, getting into the school was not easy, again because of my height. The day I registered, the head nurse refused me, saying: "We do not train babies." Thankfully, the parish priest testified to the sister about my age, and she relented.

I graduated as a state certified nurse and midwife at 23. My favorite part of school had been the practical part — going out to the villages in an ambulance driven by the parish priest, to collect women close to delivery. One adventure I will never forget was in a village when I delivered a breech baby all by myself. I had been trained well and the baby came out safely!

Later, the same priest found me a job at Avila Mission even before I knew my certification test results. It was there I met the Presentation Sisters, who ran a clinic and worked in the mission school. 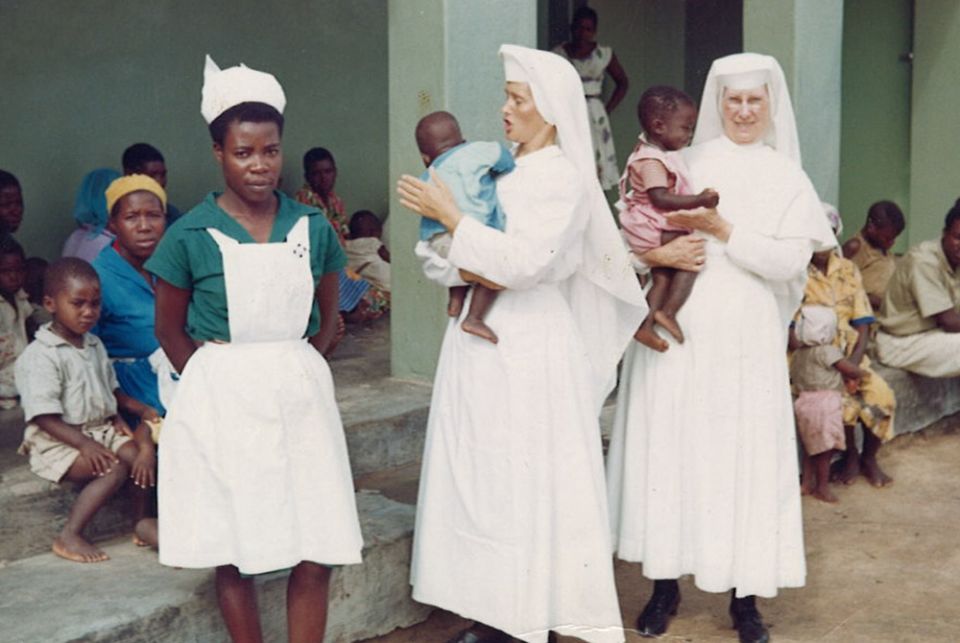 The first four Irish women to open the Presentation mission in Zimbabwe had been missionaries in India. They settled first in Harare and later some went to Mount Melleray Mission, a primary boarding school, and Avila Mission, a high school and hospital, to teach in the schools. Later on, the sisters opened a boys' school in Harare city and a girls' school in Marondera town.

What impressed me was the way the sisters related to the poor who came to their door. They were always respectful and kind. As I spent time with them, the desire to be one of them grew in me. One day the parish priest, who saw that I came to Mass every day, asked me if I had ever thought of being a sister. When I said yes, he, (an Irishman) suggested that I might join these sisters.

The priest told the superior about me. She asked me if it was true that I wanted to be a sister. She was happy, but surprised, as the sisters had not really thought about local vocations. I had to wait a long time before they let me join. Then they learned that two other women were also thinking about being sisters — but on the day I was to enter, they did not show up!

There was no novitiate in Zimbabwe, so the superior said that I would probably have to go to Ireland, but I had another idea. I knew the Precious Blood Sisters had young women joining them, so I asked if, instead of Ireland, I could do my novitiate with those sisters. The sisters discussed this idea and the two groups came to an agreement that I could join their novitiate. The Presentation Sisters came to visit me regularly and taught me about their way of life and prayer.

I entered in 1970 with 12 others who became Sisters of the Precious Blood. At the end of the two-year novitiate I took first vows on Jan. 6, 1973. My mother, a sister and nephew came, but not my father. He had not supported my choice of life. But he did come for my final profession.

After profession I went to Hwange Colonial Hospital for a three-month renewal nursing course and was assigned again to Avila Mission hospital for two years, until it was time to prepare for final vows. After a two-year wait for a visa, I was sent to Mater Dei College in Goa, India, for two full years. It was my first time to travel alone outside of Zimbabwe. I felt frightened and worried.

Our first stop was Nairobi, where my passport was taken and I was put under house arrest for 48 hours while authorities investigated me, because there was a rebellion going on in Rhodesia (Zimbabwe). An old man from the kitchen secretly brought me food and water.

I finally was released and flew to India, and met more challenges. We landed in Bombay, where I was told I had no onward ticket to Madras. I got very angry and asked for the manager. He listened, let me go and escorted me to the plane. Two sisters met me and took me to the convent. I was overwhelmed by the numbers of people on the road.

The change to India was extremely difficult. I had got used to Irish culture, and now I was faced with Indian culture. The sisters had never met an African woman before. Because of my dark skin, they took me for being of lower class and treated me this way. They could not understand my African English, and I speak very frankly — which offended them. I also missed my own food of vegetables, meat and sadza (cooked corn meal), often feeling sick from the unfamiliar Indian food. I did enjoy the studies and got to like the sisters, especially dancing with them. 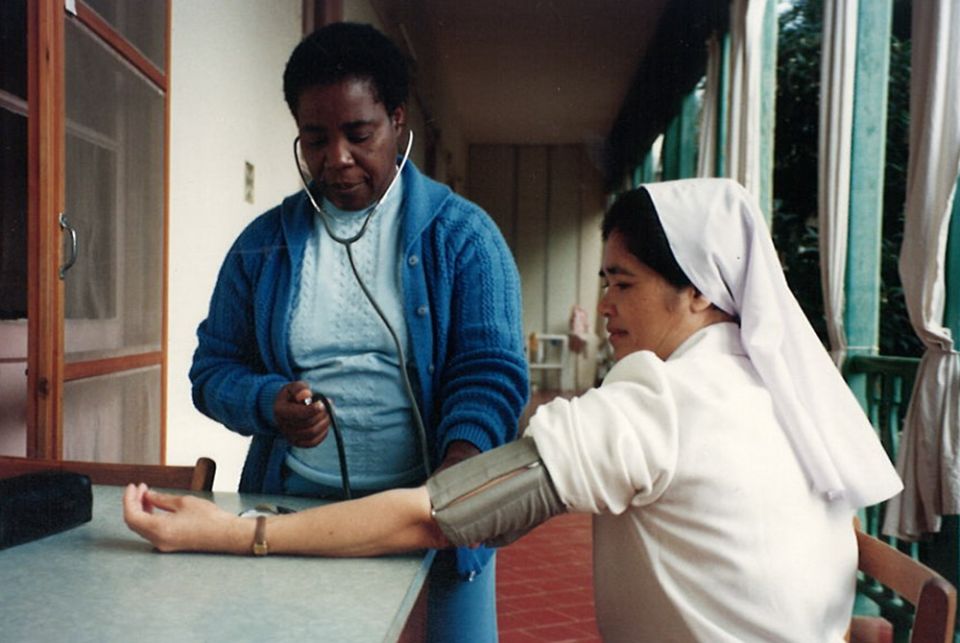 Aletha practicing her nursing (Courtesy of the Presentation Sisters)

In 1978, I returned to Nagle House in Zimbabwe and eventually went with an Irish sister to a new mission, Chiduku. The people still had the spirit of war. The local people here thought that they could take over administrative positions in the clinic without any form of training. Hence, they did not welcome Sister Margaret, who was put in charge of the clinic. This put our lives in danger. Two times we escaped being killed. The first attack we locked ourselves in a tiny closet and we spent the night there. In the morning we left to stay at another mission in Rusape. When we returned that evening, the gang came and hid behind the building. We got a tipoff from a lady who cooked for us, and we managed to escape safely.

After these traumatic experiences, I was assigned for six years to a clinic in Marondera, then finished O levels (high school) and did some vocation work. From there I was missioned to Guruve, a rural mission, where my sister companions and I helped build ourselves a new convent — burning the bricks and digging its foundation! I spent 20 years in Guruve before being forced into retirement by illness in 2003.

After retirement, I had the privilege of going to Canada, England, Ireland, the Philippines and the Holy Land. Looking back over all these years, I realize that this work made me experience God's love and His presence more than I know. I thank God for guarding and working with me in joyful and difficult moments.

I am so grateful to the Presentation Sisters for their support, for the privileges which made me grow spiritually and emotionally, and for their care in my retirement. May God richly bless them and every other person who made my journey possible.

[Aletha Matiswayiri Madziro is a Sister of the Presentation of the Blessed Virgin Mary from Zimbabwe. After her standard schooling she went to a mission hospital for nurse’s training. Impressed by the Presentation Sisters, she joined the community, and worked as a nurse for all her active ministerial life. She now lives in retirement in Nagle House, a convent and education center in Harare, Zimbabwe.]

Ministry | From Zimbabwe to the Presentation Sisters