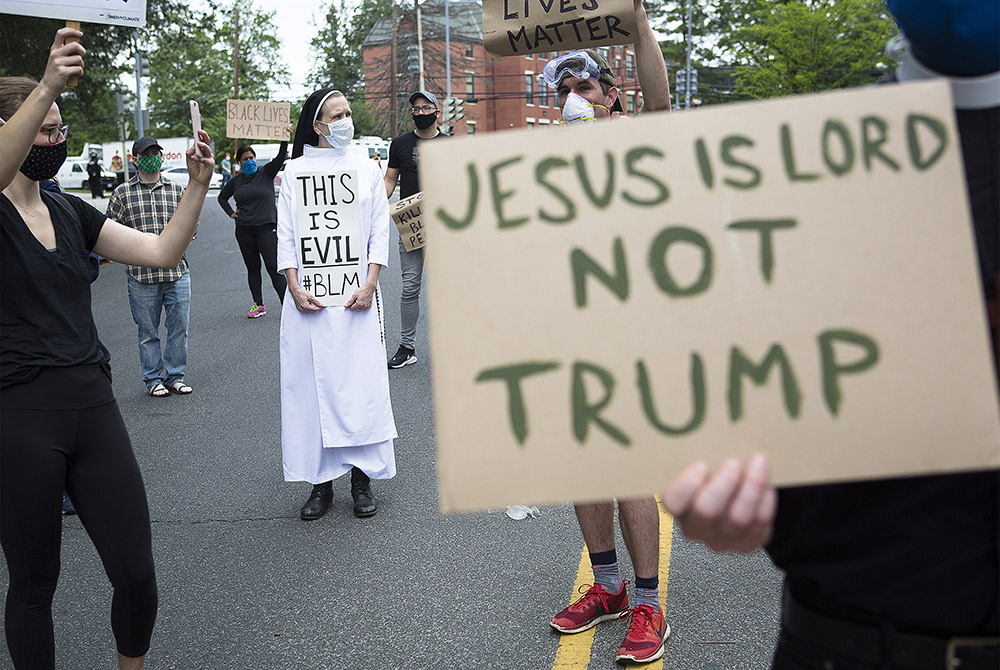 A woman religious and protesters in Washington gather near the Capuchin College June 2. President Donald Trump and first lady Melania Trump visited the nearby St. John Paul II National Shrine for the 41st anniversary of the beginning of St. John Paul's historic nine-day visit to Poland in 1979 during which he called for religious and political freedom in that country. (CNS/Tyler Orsburn)

Cognitive dissonance, as defined at Odyssey and elsewhere, is the uncomfortable mental stress we feel when we experience conflicting values, beliefs and behaviors within ourselves; or when we are confronted with opposing values, beliefs and behaviors that conflict with our own. Cognitive dissonance can be a wake-up call to do something; it can be the motivation to make change, to take action.

An example of cognitive dissonance caused by a conflict within our own values, beliefs and behaviors is the person who values healthy living through exercise and eating organic fruits and vegetables — and who smokes. Since smoking can cause cancer, it causes cognitive dissonance for this person. The resulting mental stress could move that person to quit smoking.

Many people — instead of making a change — will choose the easy way out. Any of you who have quit smoking know that it's a really hard thing to do, so a person seeking to relieve the inner tension of cognitive dissonance will begin to justify why they smoke, e.g., "It's the only pleasure I have in my day," "I have a stressful job and smoking relaxes me," or "New research reveals that smoking may prevent me from contacting COVID 19."

I have been reflecting on how we might try to relieve the discomfort of cognitive dissonance when our values, beliefs and behaviors clash with those of a group we are part of.

Religious congregations of sisters, particularly members of the Leadership Conference of Women Religious, or LCWR, hold similar values which motivate the work we do. Social justice and care for the environment are areas of particular concern to us. LCWR member congregations seek to balance the work of charity and justice, providing hands-on service for those in need and engaging in the work of systemic change, which is required for equity, justice and peace. We work for climate justice, women's rights, and economic justice; we stand in solidarity with immigrants and those seeking refuge in our country; we work to undo personal and systemic racism and for an end to poverty.

Despite many allegations of sexual abuse, Trump became president, and uses his new power to denigrate and insult women.

Over the years we have been made aware that mainstream media in the U.S. are owned and controlled by a small number of wealthy corporate persons, and in some cases have not been doing the investigative journalism that would honestly inform the public. Trump's use of "fake news," however, is not critiquing biased news; it is labeling any news that disagrees with him and his lies as "fake." Destroying the possible credibility of the news media is a road to dictatorship, which appears to be where Trump is going.

Anyone who challenges the behavior of the president is blamed by the president for the very unethical or illegal behavior for which he's challenged. Those in positions of leadership in the White House or the Pentagon who publicly disagree with the president can expect to lose their jobs or suffer in their position.

While our hearts hurt for the plight of migrants, the Trump administration locks children up with no concern for a return to their families. "Build the Wall" is a constant chant to rouse the racist attitude toward immigrants in the U.S.

While the world is waking up to the imminent threat of climate change to all life on our beautiful planet, Trump pulls our country out of the Paris Climate Agreement, rolls back water and air regulations and land rights, expands the fossil fuel industry and is extending environmental deregulation during the coronavirus pandemic to support the economic growth of polluting corporations — over the well-being of people and other Earth creatures.

I imagine most readers could add to the list of Trump abuses, but I am also concerned about how the Trump administration is causing a state of cognitive dissonance for many of us.

April's meeting of Catholic leaders with the president, followed by New York Cardinal Timothy Dolan's appearance on Fox News praising the president, causes an even deeper cognitive dissonance for us who identify as Catholic sisters. How are we to respond to the discomfort we are experiencing? What do we do about the inner stress this causes us? The tension of this cognitive dissonance causes my stomach to knot, and I need to do something to relieve the tension.

Does the inner tension of this cognitive dissonance move us to speak-out against the unethical behavior, which violates our deepest values? Does it motivate us to take action? Or do we try to relieve this inner stress by justifying why we are part of a church that appears to support Trump's racism, misogyny, injustice and destruction of life on planet Earth?

While we have been much more involved in political action since the Second Vatican Council —which thankfully has been encouraged by our present pope — political action toward the church might still feel wrong for some of us. Sadly, this is a time when we must take sides. Do we choose life, or silently watch our church leaders appearing to support the destruction caused by the Trump administration? The appearance alone of church collusion with the Trump administration will encourage many Catholics to vote for Trump.

The Catholic Church has a long history of supporting those in power in contradiction to the Gospel message, but we also have models of justice and love throughout church history. For Dominicans, the story of Antonio de Montesinos is one such model. Young Dominican priests from Santa Sabina in Spain came to the so-called new world to minister to the Spanish conquistadors. Witnessing the violent treatment of the indigenous people caused cognitive dissonance for the young priests. Courageously they decided as a community to preach against the brutal violation of the native people by the Spanish conquistadors and did not back down despite serious threats.

I'm sure your congregation has one or more favored historical models of choosing life, justice and love. Many congregational foundresses model for us what it means to take courageous action in response to the inner tension caused by cognitive dissonance.

How will history tell our story? Will we be the ones who spoke truth to power in our church, or will we be the ones who ignored bad behavior? Will we soothe our cognitive dissonance with justifications of our appeasements with the institutional church, or will we use the discomfort of cognitive dissonance to move us to take action for justice and love?

[Ceil Lavan is a Dominican Sister of Blauvelt, New York. With an academic background in education, religious studies, and ministry, she has been the congregational coordinator of social and environmental justice for many years.]