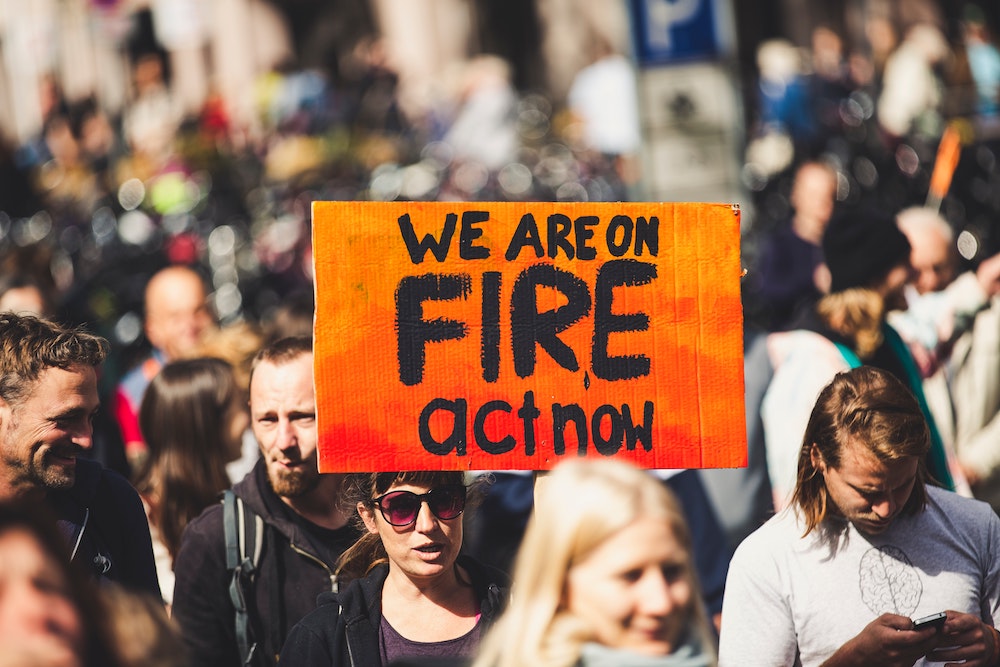 Demonstrators marching together, while a person holds a sign that reads "We are on fire, act now." (Unsplash/Markus Spiske)

I was in another Zoom meeting with my friend, another Catholic sister who is a professor on a college campus. Together we were lamenting the extreme polarities in the church and society. Rubbing our foreheads. Sighing. Praying right out loud: God, help us.

Together we were bemoaning how the tensions impact our freedom to love and serve, to remain fierce in our hope. I asked her what she's seeing from her vantage as a professor who spends a lot of time with young adults. I know she is often buoyed by the zeal and vision of Generation Z. I was hoping to hear something encouraging.

But her expression turned grim as she started to speak about the conversations she's having with her colleagues — who are sociologists and historians.

"I hate to say it, but we're headed toward a civil war," she said.

She explained that because President Donald Trump's base will vote in person and Biden voters will vote by mail, we won't know the results quickly. Her colleagues are predicting that Trump will declare victory prematurely, and then his base will refuse to accept any other outcome.

The war might not be a bloody war but a culture war, she said — a power struggle fought across every sphere of society: online, in families, in churches and in the marketplace. Yet an image haunted me: those who say they have stockpiled guns emerging from the shadows, armed and angry, feeling entitled and emboldened to fight for what they believe belongs to them. Many will retaliate. Others will run and hide in fear. I can't imagine this scenario without bloodshed.

I realized, then, that this isn't too far from what we've already been going through. In the past decade, there's been an increase of militias organized in the backroads of the nation. Gun violence continues to rise, impacting both rural and urban dwellers. Since George Floyd's murder in May, a mixture of protest, counter-protest, looting and a militarized police presence have ripped wounds into our cities and stirred up doubts that downtowns can recover. In many places the battles continue. Meanwhile, we have surpassed 200,000 dead from COVID-19 this week, a harrowing juncture. This is the highest number among developed nations by far. It's embarrassing and a cause for reckoning, repenting and conversion. We are already fighting, and the body bags are piling up.

I'm afraid the war has already started. Its battles have already begun, with armed conflict and civil unrest exploding throughout the nation. Maybe the war is gradual and awful; much like the slow removal of a bandage from an infected wound. Some want monuments to come down; others are willing to use weapons to protect them. Some want to defund the police; others are still denying the reality of systemic racism in our police departments. Some wear masks to protect others from COVID19; others refuse to sacrifice their personal comfort.

We've sorted ourselves into echo-chambers online and in real life. We've succumbed to a mentality that our disagreements must make enemies. Moderates have become an endangered species, and middle grounds are the stuff for historical novels and nature preserves.

The good news is that we have a formula to move forward. We have inherited two frameworks that can help to restore civility and promote the common good, and liberty and justice for all.

First, the Constitution. Its authors were well aware of the fallen nature of humanity and offered us a path to uphold peace. The editors of America wrote recently:

The Constitution itself is inspired by a theological worldview. Our founders believed that they were creating a form of government for a fallen world. Their true genius lay in how they accounted for the human predilection toward sin and division by creating a strict separation of powers that, paradoxically, would serve to unify the country and guard it against would-be tyrants and demagogues.

Second, the Gospel of Jesus Christ and its accompanying Scriptures: from Matthew to Revelation, we are presented with a promise of covenantal love that reconciles differences and establishes peace and justice. In this vision, the church — the people of God — love their enemies, forgive wrongs, offer kindness and generosity, practice nonviolence, build relationships and act with charity and justice. The church needs to imagine how we can protect against the collapse of democracy and heed the call to be peacemakers. We must also heed the words of Scripture that remind us to persevere and be encouraging to one another. We may already be at war, and so we cannot delay in striving for reconciliation and peace.

History shows us that Christians have done this before. I'd like to offer one example that could be a map to start planning our route to reconciliation. During apartheid in South Africa, the South African Council of Churches work was twofold: they advocated for the end of apartheid and they began to prepare for the Truth and Reconciliation Commission.

Just two years after the election of Nelson Mandela, the commission began its proceedings. During its seven year duration, it received over 21,000 statements from victims and more than 7,000 amnesty applications; it granted 849 amnesties for crimes. Through each act of truth-telling, narratives were rewritten and civility was recovered. Forgiveness, transparency, lament and reconciliation helped move a nation closer to healing. Gradually the nation recovered.

When it comes to working to restore trust and unity, the church in America is uniquely positioned to end the collapse of democracy and bridge the divides that are destroying us. We are called to get to work, God's work, the work of love and mercy. Now is the time.