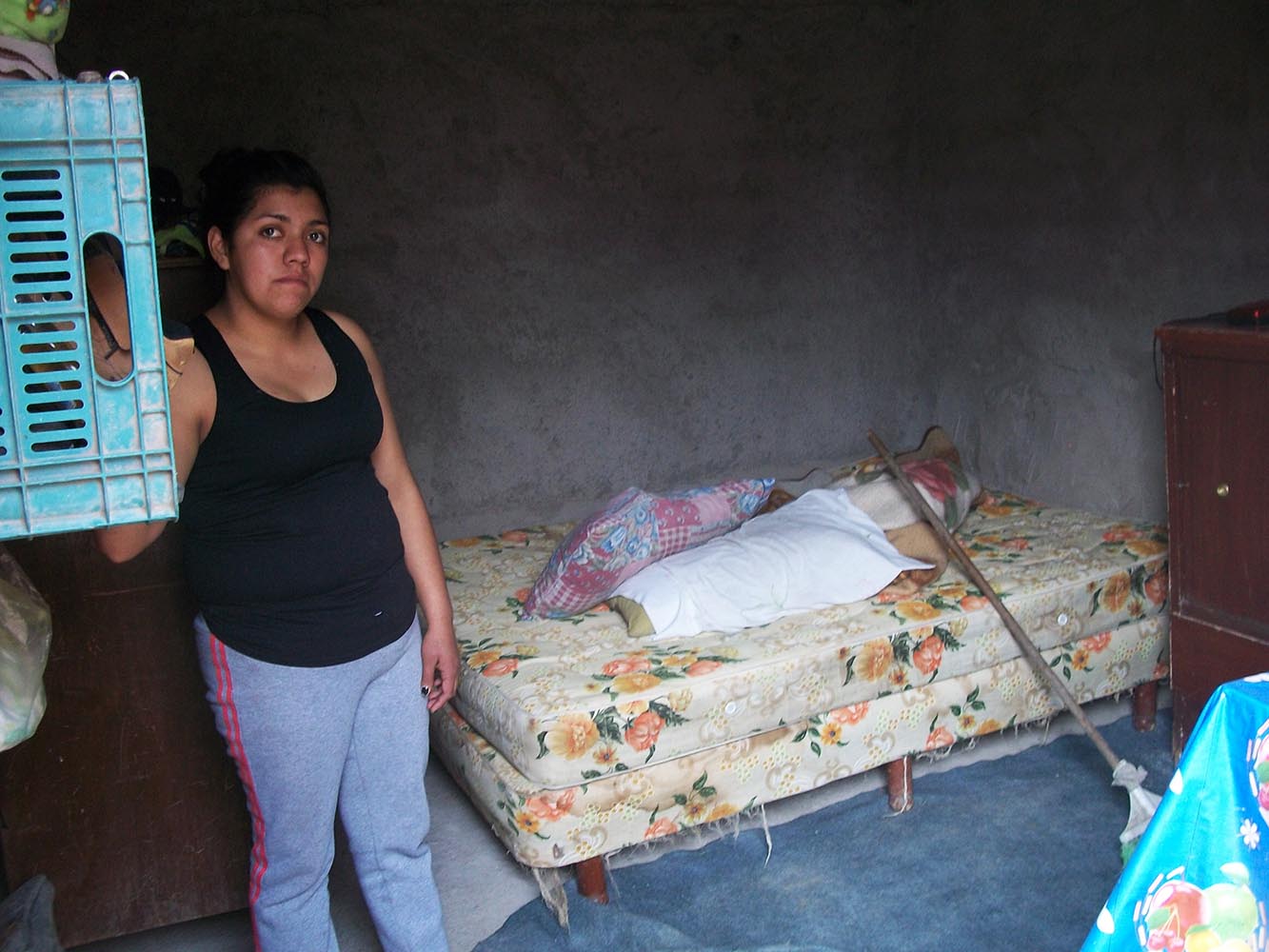 Lupe is pictured in housing converted from a pigsty, where she is living with her 3-year-old boy and her partner, in the community of Villa García, Zacatecas, Mexico. After being chased out by her in-laws, she went home with her partner, only to discover there was no room for them in the house. An uncle who raises pigs behind their house converted a pigsty into housing for them. (Frances Smith)

Editor's note: More than 1.6 billion people worldwide live in substandard housing. Of those, at least 150 million have no home at all. In this special series, A Place to Call Home, Global Sisters Report is focusing on women religious helping people who are homeless or lack adequate shelter. The series examines how homelessness and a lack of affordable housing affect teens and young adults, families, migrants, the elderly and those displaced by natural disasters and climate change in stories from Kenya, India, Vietnam, Ireland, Puerto Rico, the Philippines, the United States and elsewhere.

When I was president of the nonprofit Neighbor Helping Neighbor in Parkersburg, West Virginia, we had the Department of Housing and Urban Development, or HUD, help to build and later repair houses. Here in the community of Villa García, Zacatecas, Mexico, there is little or no government help at present. Yet many live with poor housing conditions, or are robbed of the little they have.

Over the years here, I have been so sad for the families who have had titles to their land, but then — by some crooked means or legal detail someone has employed — they find out a relative or neighbor now has papers for their land. One such family lives in the hills of a remote area.

Isabel, widow and mother of eight, lost her husband at age 40 to an unknown cause. She has two children with muscular dystrophy. One of her husband's relatives wants the land where she lives. She has had to stop raising chickens and other farm animals that gave the family sustenance. Now, all she has is the actual house, and she is not sure that it will remain hers, even though she has the title to it. No one knows how this story will end.

Chuy cared for his father for years. His father lived across the road from him and told Chuy the land would be his when he passed on. After his dad died, another family member worked with their son, a lawyer, to get title to the land. Chuy then had no access to the well that was a part of the land, and many hard feelings arose. Orally ceding property is not secure, and causes families to quarrel and fight many legal battles.

Reynaldo lent his property title to his brother, for what seemed like an innocent request. His brother found someone who helped him change the document so that the land was now his. Reynaldo subsequently became very ill, as it was very hard for him to forgive what his brother had done.

Since this is a semi-desert area, it seldom rains. When it does, many homes have problems with roof leaks, damp walls and crumbling structures. One day I was visiting a family in a rural community, when Rafa mentioned that his kitchen had fallen down. On my next visit I found out that another room had fallen, and that an attached room also had to be torn down. With donations we were able to begin building rooms for the family. 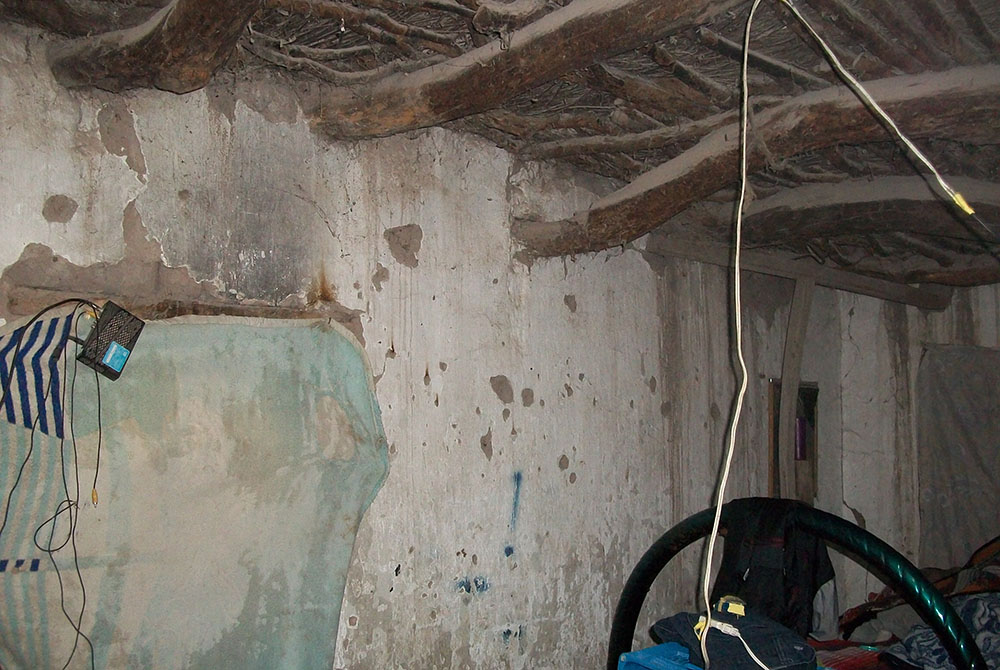 Rafa's home, in Villa García, Zacatecas, Mexico, contains a room that had to be removed. It was attached to the kitchen and another room that fell down. It was being used for one of the adult men in the family, and snakes were living in the ceiling. (Frances Smith)

Another family told me they badly needed a room to separate the girls from the boys.  The three oldest are girls, ages 16, 13 and 11, the boys 9 and 8. All were crowded into one room, with the parents sleeping next to them, only a partial wall dividing them. With donations we also began helping them to build a room. 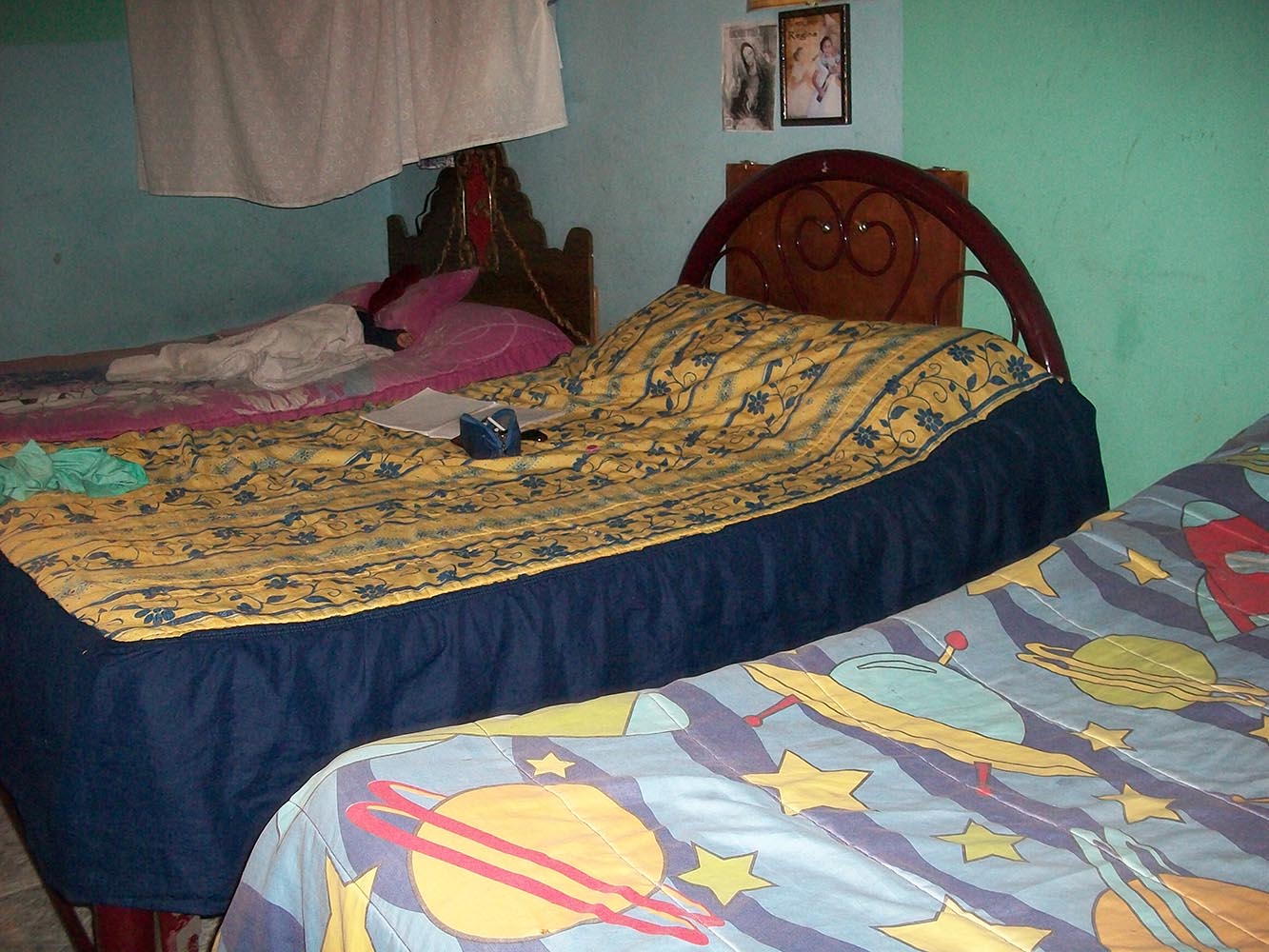 Pictured in the photo is the single room for the five children of one family — three girls, ages 16, 13 and 11, and two boys, ages 9 and 8. Donations are helping the author and others to help the parents build a room to separate the girls from the boys. (Frances Smith)

These are only two examples of families that are affected by low wages and the weather. Since we began helping these two families, other families from this community have come looking for help. In this community, there were 14 families that paid a former local government worker to begin constructing needed rooms. After paying the woman, they discovered it was a fraud. Because of the coronavirus, home visits are restricted, but we will try to continue to visit these families in the future.

Families that rent generally have very little income. One family had a plot of land where there was no electricity or water, but with a job fixing bicycles that paid better than the factory wages, they built a room in which they have a bunk bed. The boy and girl sleep on top, and the parents sleep in the bunk below. The day we visited them it had rained, and we found the floor flooded.

They had no way to finish it, but we helped them with bricks and cement. This family was jubilant to have their own space and not pay rent. The village took them water, which they kept in containers outside the house. Eventually electricity was supplied as another family also built in the area. Their dream is to build another room, and they've begun collecting materials to do so. 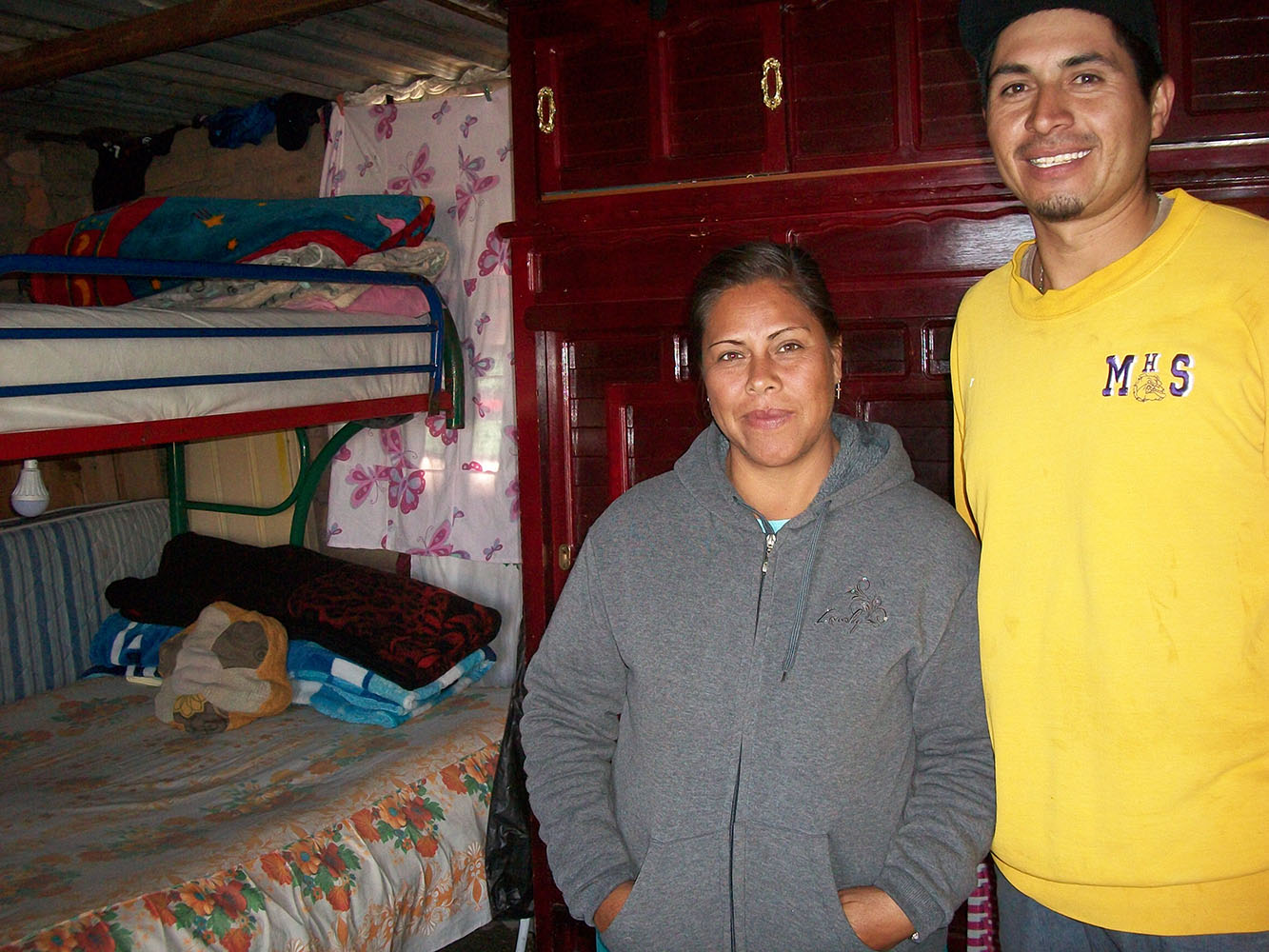 Two parents stand in the room that they built on a plot of land that they own in Villa García, Zacatecas, Mexico. They have a bunk bed in the room; their children, ages 14 and 11, sleep on the top bunk, while the parents sleep on the bottom. Despite having to deal with flooding, the family is glad to have their own space and not pay rent. (Frances Smith)

Couples often begin their life together with one of their families. When I met Lupe, she told me her in-laws had chased them out, so she went home with her partner, only to find out there was no room for them in that house. Consequently, one of the uncles who raises pigs behind the house agreed to convert a pigsty into housing for Lupe, her 3-year-old boy and her partner. Her father gave her a small plot of land on which to build, but their income isn't enough to do so.

There is no end to the needs due to poverty. These are mostly people who value work and find creative ways to augment their income. Some go into the hills and gather good dirt for plants; in season, they gather and prepare the edible pads of the nopal cactus, honey, the fruit of the bisnaga, another form of cactus, and the fruit of prickly pear cacti. Many also recycle plastic and other materials.

We have helped fix houses and repair roofs for the elderly and others, helped find roofing for homes, helped with beds, stoves, refrigerators and hot plates, sometimes used, sometimes new. There are many we have been able to help in these small ways, but there are few we can help with an entire room. We are grateful for the donations that come in, as our goal is helping the poor live with more dignity. Since I belong to the Sisters For Christian Community, we don't have resources in common, but I have received donations from some of our sisters. Other donations come from family or acquaintances who recognize that this is a shared ministry of love.

[Sr. Frances E. Smith is a member of the Sisters for Christian Community. She has ministered in Villa García, Zacatecas, Mexico, for the last 22 years.]