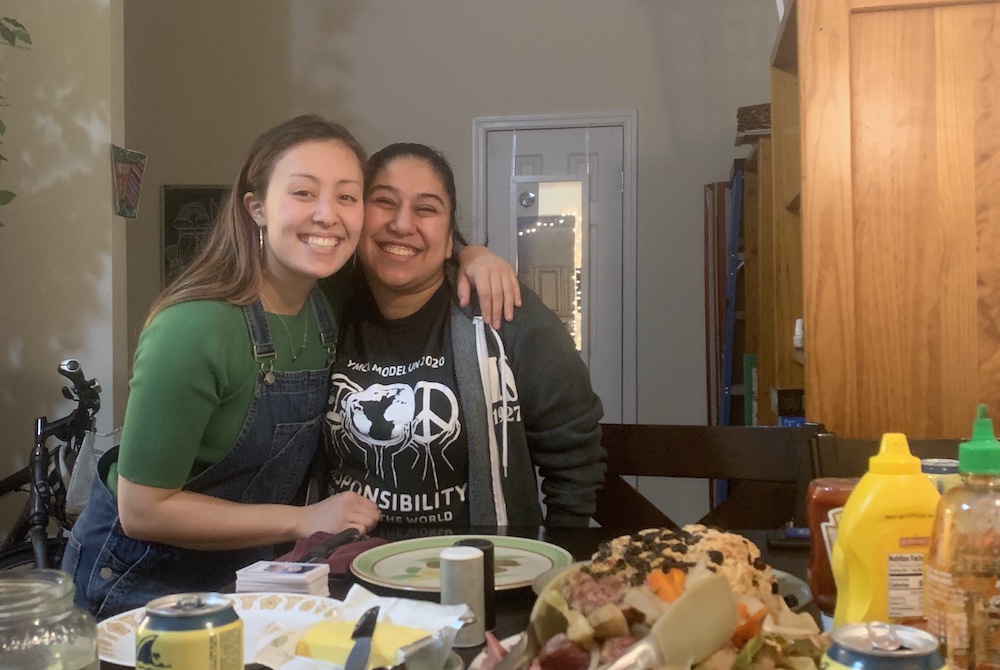 Though March 17 was a hard day, I was still able to eat corned beef and cabbage and spend time with Elisabeth Ortega, one of my community members, right, and a university friend, who took this photo. (Courtesy of Sabyne Santiago)

When I wake up every morning, I check my phone immediately, battling between returning to a dreamy haze and needing to get ready for the workday. I usually check the morning news and click through a couple of social media apps. Some people say using your phone right when you wake up isn't necessarily healthy, but I like to be reminded that the world exists beyond my own quarantine habits.

It was March 17, St. Patrick's Day. I bought corned beef and cabbage the night before and prepped my veggies to throw everything in a slow cooker at 11 a.m. for a 7 p.m. dinner. I had a green shirt laid out, and I was excited to bake Irish soda bread from scratch for the very first time.

That morning, I did my usual routine of lying in bed, reading headline after headline, when my heart stopped: "8 dead in Atlanta spa shootings," "8 killed in shootings at 3 Atlanta-area spas," and "Atlanta shootings: Asian women among eight killed at three US spas."

I wasn't shocked at the headlines, but after experiencing the Sandy Hook shooting near my hometown in Connecticut in 2012 and the constant rise in numbers of people dying from mass shootings, I felt utterly defeated and a bit hopeless that this is the world I need to accept.

Then, I checked Instagram and saw more about the particular victims of this crime. Their names didn't immediately come up, but six of the victims were revealed to be Asian American women, many of them Korean. Later, I learned their names: Soon Chung Park, Hyun Jung Grant, Suncha Kim, Yong Ae Yue, Delaina Ashley Yaun, Paul Andre Michels, Xiaojie Tan, Daoyou Feng.

That morning, I had a meeting at 9 a.m., but I joined it, a bit unapologetically, at 9:15 a.m. I didn't unmute myself in this meeting until the very end. I couldn't speak much, but I at least was able to show a smile and pretend for an hour that six Asian American women weren't just mindlessly killed. At the end, my co-workers mentioned something about the shooting briefly, but I didn't care to chime in. I was unsure what I was feeling at the time. All I knew was that my heart kept skipping a beat and my brain stopped churning any other thoughts that didn't have to do with the headlines.

In a previous Notes from the Field post, I talked about the attacks that were happening around Lunar New Year and posted a poem of my reaction to the tragedies. This time around, I tried to write another poem and let my pain out, but as words stumbled onto the page, I couldn't quite grasp this exact moment. How could someone wake up one morning expecting to continue their daily routine and then suddenly die because a man with a gun had a "bad day"? How could I walk outside without fearing that someone at any point could shoot me? This is both an anti-Asian-American catastrophe and a gun-control issue.

I still hosted a small St. Patrick's Day dinner that night with one of my community members and a university friend who lives down the street. It was such a relief to be with people I love, talking about movies and life and not about the terrors of being a person of color. We danced to the tunes of Flogging Molly and Dropkick Murphys and enjoyed a couple of rounds of Monopoly Deal, a card game based off the original game of Monopoly.

For the rest of the week, friends and family texted me, making sure I was holding up OK. I appreciated the sentiments and felt strength in my communities that supported both me and my heritage. 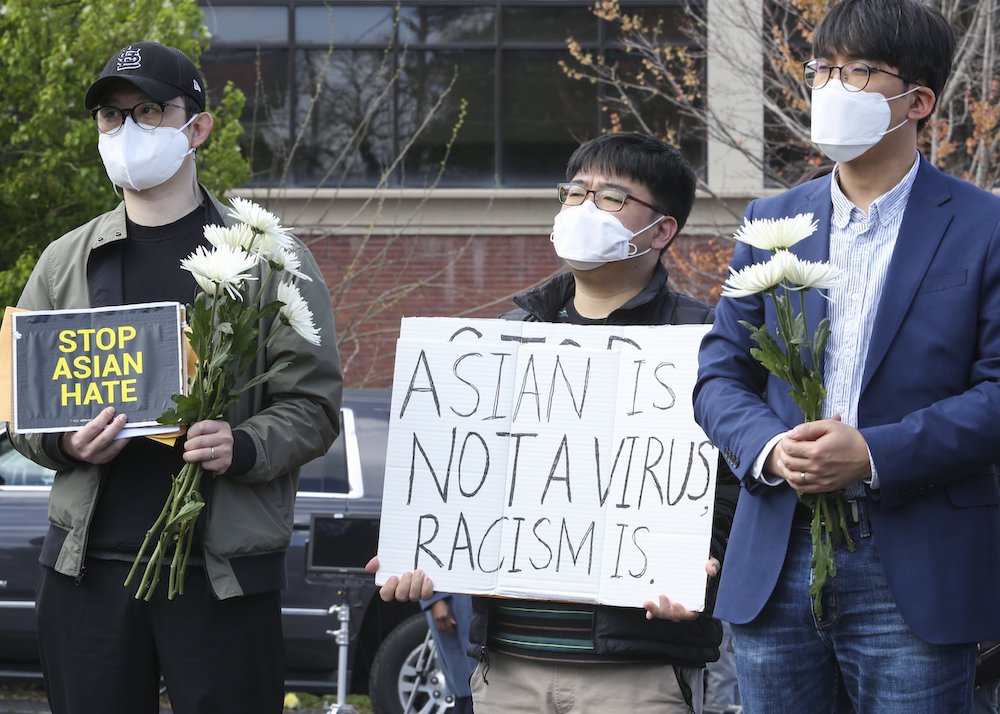 It's now been more than two weeks since the Atlanta shooting, and yet another 10 lives were lost to bullets of a gun during another massacre in Boulder, Colorado. It was at another public place, where people expect to run some errands and go home, but Eric Talley, Rikki Olds, Kevin Mahoney, Lynn Murray, Denny Stong, Teri Leiker, Tralona Bartkowiak, Jody Waters, Neven Stanisic and Suzanne Fountain didn't get to go home. They woke up one morning, possibly lying in bed checking their phones or making their morning coffee, and walked out the door like it was just another day.

I cry for my Asian American community, and I cry for the victims of gun violence. I cry for the 26 kids and teachers from Sandy Hook, the 10 people from a South Carolina nightclub, the five people in Milwaukee and another five in Aurora, Illinois. I sob thinking about the 23 people at a Walmart in El Paso, Texas, and the nine people killed and 27 wounded from Dayton, Ohio.

Our country is not only plagued by COVID-19 and racism, but by mass shootings of innocent people. An article from Newsweek revealed: "According to the Gun Violence Archive, a nonprofit group that catalogs gun violence in the U.S., 104 mass shootings have occurred in 29 states plus Washington, D.C. in 2021 so far. Gun Violence Archive defines a mass shooting as four or more people shot or killed in a single incident not including the shooter."

So my question for anyone in the United States is: How do you feel safe? How do you walk outside without preparing to die at any moment? How do I wake up, look at my phone and pretend I'll get to do that the next day and the day after that?

On March 21, the Good Shepherd Volunteer community gathered virtually for a book club discussion on So You Want to Talk About Race by Ijeoma Oluo. The group of women was excited to dive into our thoughts on the topics in this book and discuss our lived experiences through a social justice lens.

We talked about our own struggles of racial identity and the realities of not always being aware of some of these incidents that happen to people in Black and Brown communities.

Before leaving the Zoom call, I wanted to make something very clear to our book club: We are in an echo chamber. Even now, you may not realize it, but you are probably reading this piece because the topic intrigued you or you support young people doing service years. You already have some sort of stake in this topic, so of course you want to hear me and support me. What about those who weren't in the Zoom call or who aren't reading this type of coverage? What about the people who genuinely believe we don't need more gun control and who don't see Asian American hate crimes as an issue in our country?

Oluo's book is a necessary step for those interested in talking about race with those who don't know how to or those who don't want to. She gives clear examples of racism in all aspects of our lives and gives easy-to-read guides on how to progress in your own growth in social justice. Many chapters are for white folks who may already try to help with race relations but may need more insight on how to do it effectively for those communities who still feel like the conversations aren't helpful or inclusive. 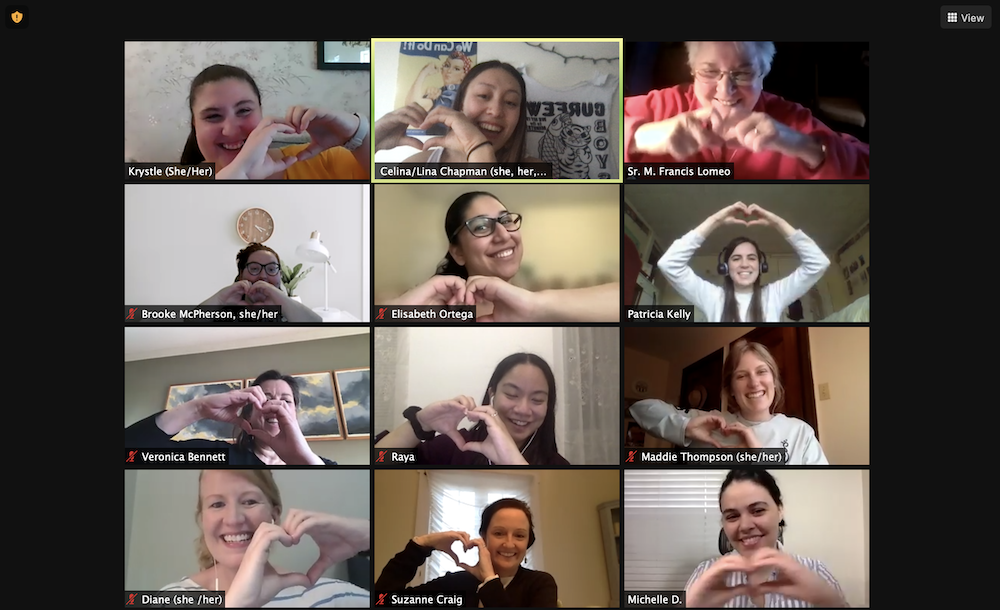 The Good Shepherd Volunteers book club involves current volunteers, our directors, board members and outside community members. It helped me reflect on race relations as well as inspired me to move forward in action. (Screenshot courtesy of Celina Kim Chapman)

I have been ignited from this book and the recent shootings to break through the echo chamber. Honestly — and to be a bit lighthearted — I am going back to the 2010s trend of saying "YOLO" ("You only live once") because I've been shown that our lives are truly fragile and precious. I not only want to be a voice in the noise of thousands but a hand in the action. Writing for those who want to be involved and want to continue in the fight is necessary, but so is speaking to those who aren't yet in the sphere of justice.

There is still so much emotion within me: anxiety, doubt, restlessness, outrage. But it is not emotions that will drive me but a clear goal and consciousness of what needs to be done for progress. If working at Good Shepherd Services has taught me anything, it's that we are allowed to feel and have our own thoughts, but we also need to consider the people we represent and our own power at the table. I still have friends and family who don't believe that people hate me because of the way I look. I follow people on Instagram and Twitter who go to shooting ranges every week and post false anti-vaccination information. A good preacher can capture the people in the front of the church, but I admire the preachers who are able to welcome the people who haven't even thought about being in it.

I invite you to read Oluo's book along with more books that may make you feel uncomfortable. I beg you to have hard conversations with those who don't want to have the conversations and to speak up for those who have tried speaking up and have historically not been heard. Cry for the dead, weep for the loved ones who have lost, but remember that complacency and apathy continue to drive this division, hate and chaos in our country. Call your local representatives and ask them what they're doing for your community about gun control and anti-Asian violence. When you post on Facebook or Instagram, also ask people to respond to your posts and open conversations.

Wake up every morning, look at your phone (or watch the morning news on TV), and remember that there is a world out there in need of your voice.