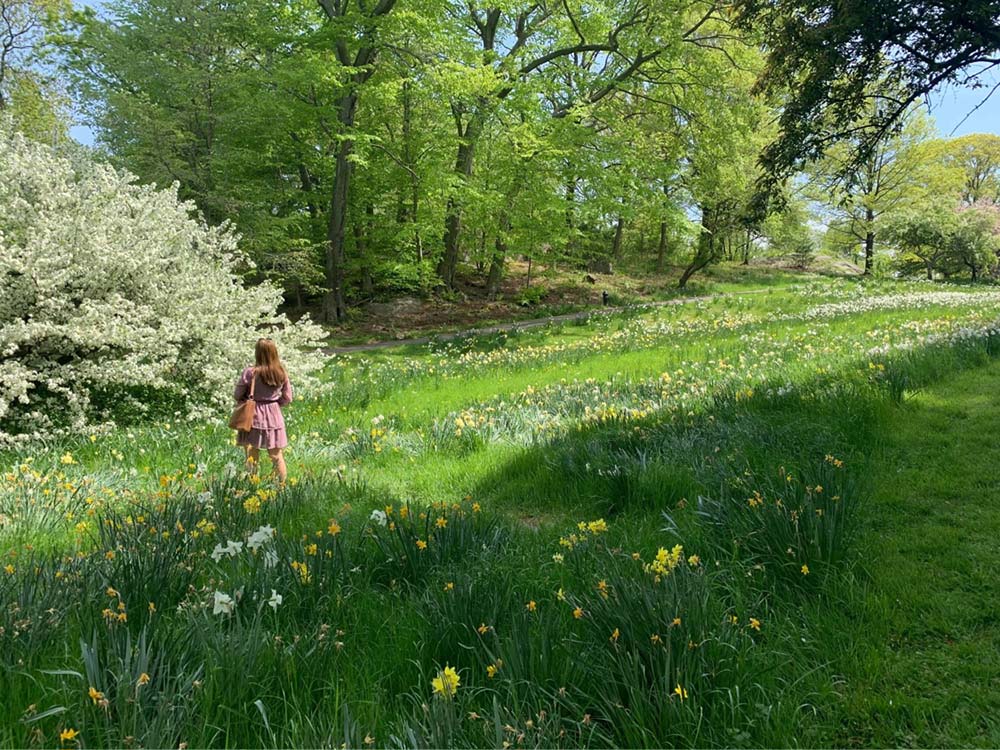 At the New York Botanical Garden, I was awed at the glorious lilac bush in the hills of daffodils. Hundreds of bees were dancing and humming within the bush, making me feel so small in a world so big. (Courtesy of Maddie Thompson)

In all honesty, I didn't fully believe in diversity, equity and inclusion work before coming into my service year. Throughout my time at university, I didn't think about the demographics of the university's student body or staff. Every day, walking through campus, I saw people of all ethnicities, religions and backgrounds, all united with a coffee in one hand and textbooks in the other. I grew up in a predominantly white neighborhood in the suburbs of Connecticut, and moving to St. John's University in Queens, New York, and being surrounded by new cultures didn't faze me. Or so I thought.

During my last semester at St. John's, I took two classes that changed the course of my life: Taco Literacy and Asian American Ethnic Literature. Though the former seems a bit humorous from the title, both courses touched upon identity and culture in two distinctly important ways.

Taco Literacy was an exploration of Mexican history through food, and my professor encouraged us to also dig into our own histories and cultures through the cuisine we unknowingly attribute to ourselves. 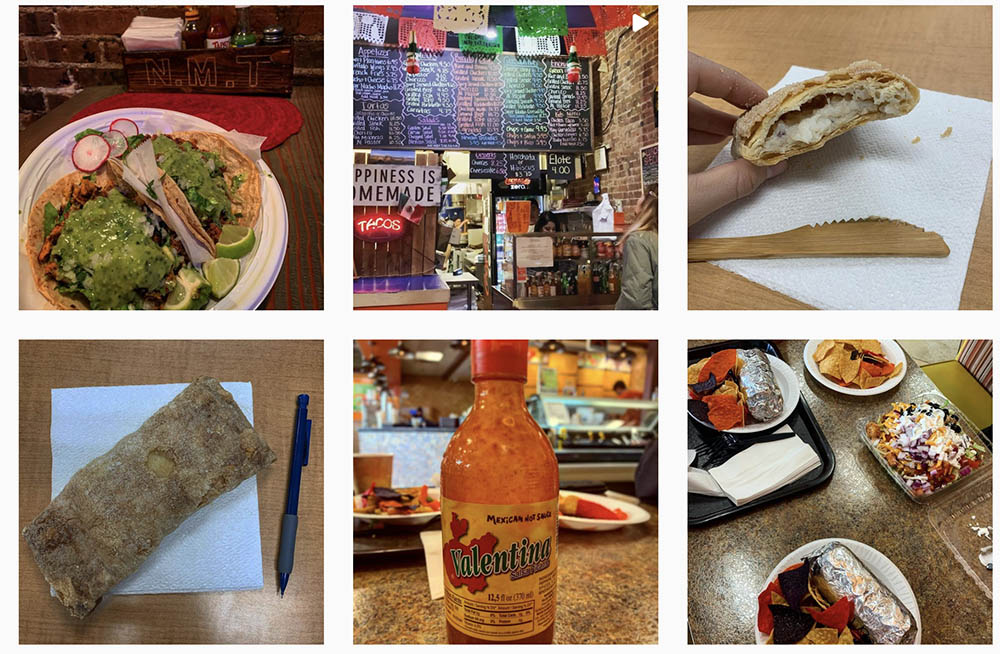 In my Taco Literacy class at St. John's University, we had to run our own food Instagram, but instead of just snapping photos of food, we had to dive into the histories of each of the foods we ate and ask questions about the cultural implications of each kind of dish. (Courtesy of Celina Kim Chapman)

Asian American Ethnic Literature was the first class where I was able to understand, explore and write about the history of Asians in America and my own dual identity of being both Korean and American.

Even though my Spring 2020 semester was cut short because of the pandemic, the online work I was able to do in these classes changed my perspective on diversity, equity and inclusion work and led me to work in anti-racism and equity today.

In the past year, I've hosted events for Hispanic and Latino/a/x Heritage Month, the National Day of Racial Healing, and #justLOVE Day. In April alone, I created Good Shepherd's very first Earth Month 2021 Virtual Art Gallery and hosted an Earth Month celebration with a Native American guest speaker from Drums Along the Hudson.

A screenshot of Celia Ceballos and me during our Earth Month 2021 event. We were so proud of all the Good Shepherd Services artists, and we were grateful for our guest speaker, John Scott-Richardson, for his powerful words. (Courtesy of Celina Kim Chapman)

I also was a part of the 2021 Founder's Day and staff recognition planning committee and actually broke Zoom during the event as more than 200 staff members came to support their colleagues and celebrate our foundress, St. Mary Euphrasia. (No one was able to write in the chat, and people kept getting kicked off the call!)

I have been prepping to host an Asian American and Pacific Islander Heritage Month panel event, to be held today, May 12. I will not only share another poem about my Asian American identity, but guide event attendees through hard conversations with prominent Asian American leaders in New York City. Celina from 2020 would have never even thought about presenting her Korean heritage to a crowd of 100-plus people. 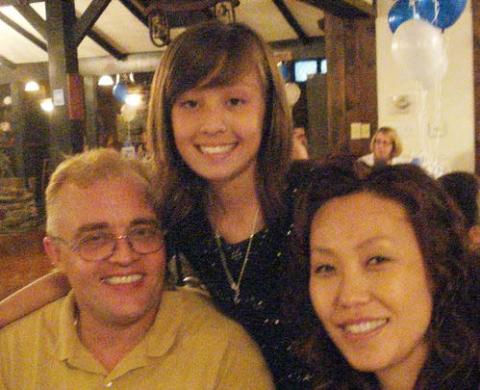 I am in sixth grade in this photo with my umma and dad. I was blessed to be raised by two loving parents who kept me positive and told me I could achieve anything. (Courtesy of Celina Kim Chapman)

I've never celebrated Asian/Pacific American Heritage Month. I don't think I knew about this month until I got to university. If you've read some of my past posts about the Asian American hate crimes going on throughout the United States, you know that I grew up in white/American culture. Of course, I loved my Korean heritage, but everything Korean was labeled "different" and "exotic" in my community.

I was the Asian girl when I was little. I had the smelly food and the smelly house and the customs that made people not want to be friends with me. On Saturdays, kids had playdates while I sat in the basement of a church, learning Korean from volunteer teachers and colorful workbooks. I had the mom who didn't hang out with other moms and who didn't always understand why things were the way they had to be.

When I got to St. John's, I didn't realize how much this duality — this split identity — affected my perspective on diversity or equity. I believed there were injustices against Black and Brown communities, but I never acknowledged how Asians are also othered by dominant white culture. I think it's because I personally have felt othered by both the Asian community and the white community. I've always been told that I'm too white for the Asians and too Asian for the whites. 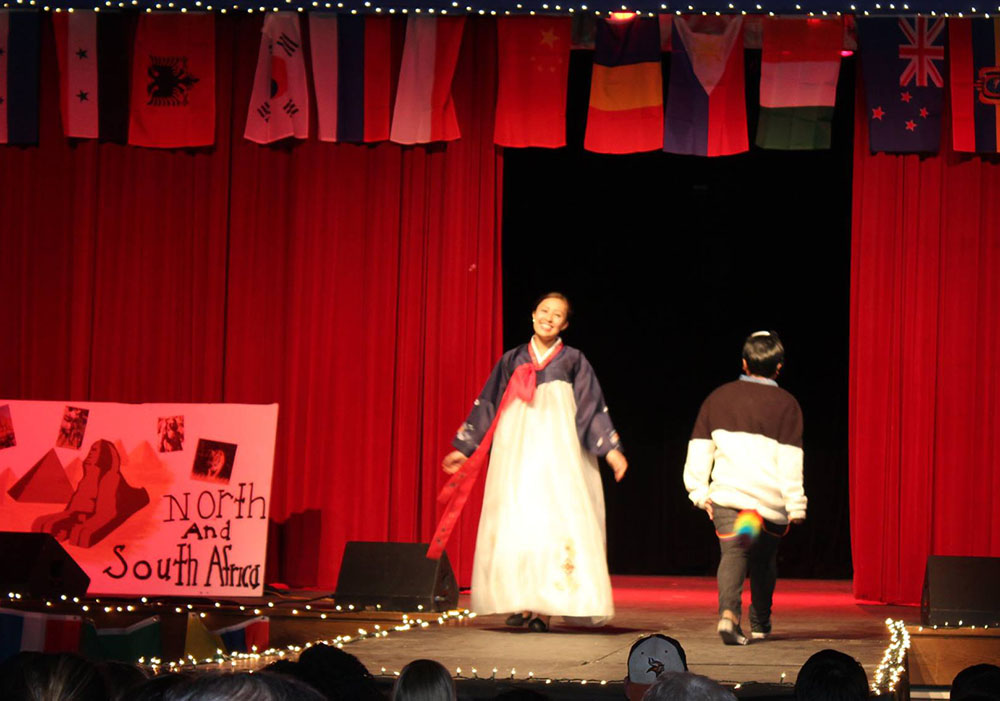 In high school, one of the clubs hosted a fashion show and made the theme about celebrating different cultures. This was the first time people saw me embrace my Korean heritage as I wore a traditional Korean hanbok. All of my friends were so surprised to see me in it. (Courtesy of Celina Kim Chapman)

In 2021, for the first time in my life, I actually start crying when I think about how much that phrase hurts me. I am now finally aware of how horrible it has been to feel no sense of belonging to any culture.

I came to St. John's thinking race or ethnicity didn't matter to me or didn't pertain to me because no one cared about my identity for the first 18 years of my life unless it was in one community or the other. I shunned my Korean side for so long because that's what made me distinct and different, but not important and human.

Everywhere I go, I am asked, "What are you?" The question beats into my ears, thumping like a bass drum lodged into the center of my brain, echoing louder and louder as each year passes. Working in this position and being a part of Good Shepherd Volunteers and Good Shepherd Services has finally lulled the drum.

The month of May is more important than ever, especially this year. Good Shepherd Services is hosting a panel for a conversation on the hostility and disconnect between Asian and Black communities, offering a self-defense workshop and partnering with Act to Change for the National AAPI Day Against Bullying and Hate. We're hosting a special screening of part of the PBS series "Asian Americans," which shows the history of Asians in the United States, at the end of the month, and we're supporting our AAPI colleagues who are hosting events like the Coalition of Asian Pacific Americans' Asian American Pacific Islander Heritage Festival.

I have never been prouder to call myself a Korean American and work for an organization that cares about all voices. 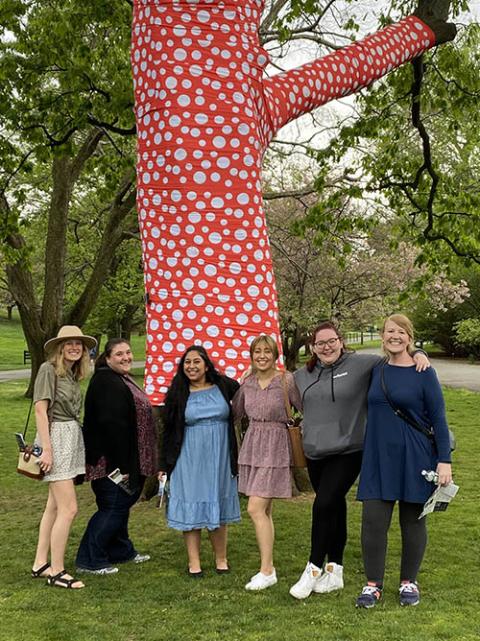 For the end of the year, a board member for the Good Shepherd Volunteers bought the local volunteers tickets to see Yayoi Kusama's newest exhibition at the New York Botanical Garden. It's been refreshing to spend time with my community outside our homes. (Courtesy of Michelle DeMelo)

If you didn't see Maddie Thompson's last post, then you may not know that this is my final blog for Notes from the Field, too. Being able to read and watch my journey from December to now makes me chuckle and fills me with warm hope. My therapist even told me the other day that I have grown so much from the beginning of the year, and she sees me budding and blossoming like the trees sprouting green all over New York City.

Growth is not a linear path, as many of my mentors and peers have told me again and again. I've had issues with keeping up with my community and spirituality and waves of mental health lows, but it all comes back to mindset.

I could have let this year push me into ignorance and hate. I could have been working in anti-racism and equity and continually denied my Asian-ness and Korean heritage. I could have given up on this program and my community after every little bump in the road, but I realized that life blooms in the most unsuspecting places.

In honor of the most recent holiday, Mother's Day, I dedicate my story, my journey and the path I've walked this year to my umma ("mom" in Korean). She has worked more than any other person I know to give me the strength to be who I want to be. In my world, she will always be the original feminist who pushed past boundaries starting in her small town in South Korea and now in the United States. Thanks to her, my Korean and American grandmothers, and the long line of women who have come before me, I embrace every flaw, practice patience, and walk into every situation knowing that from that point on, I can and will grow.