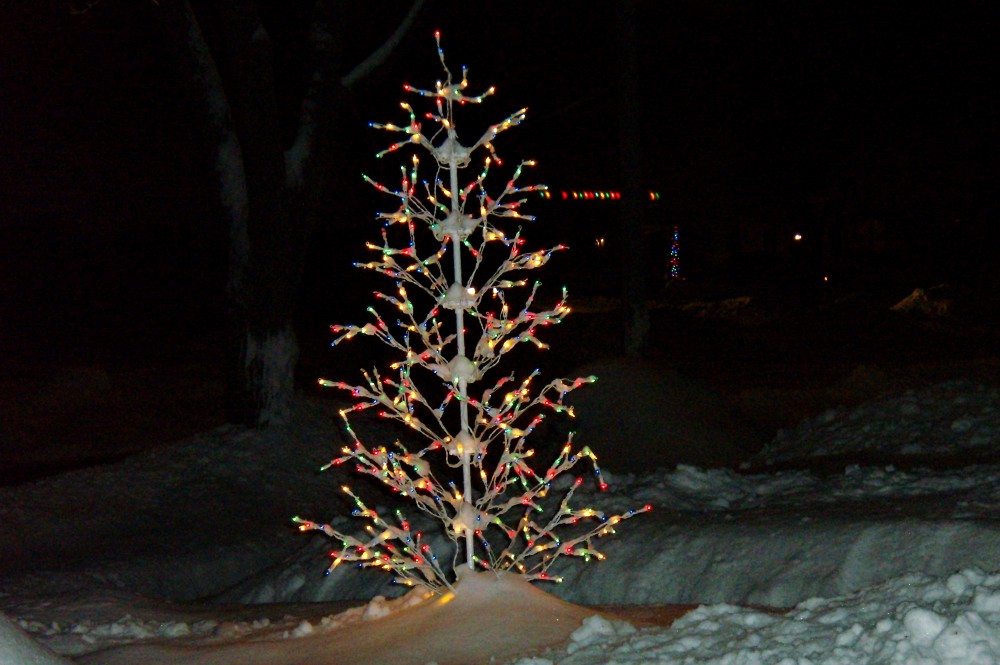 I had a wire-and-light tree for the front yard, so up from the basement it came and into the yard it went. (Jane Marie Bradish)

I've never been much of a fan of Christmas.

In the consumer society in which I live, the focus is often "What did you get me?" Schools seem to reinforce that, and the kids are giddy or grumpy the week before vacation as they trade stuff in the form of presents.

I've sung in my parish or religious community choir since I was 13, which meant starting rehearsals of Christmas music when we were still sweating our way through the end of summer. The stores put up displays and play music beginning in August — even television starts airing movies and holiday specials. The neighborhood outdoor decorations go up early, before the weather gets cold, snowy and icy (and once "frozen in" they can remain up until after Easter).

By the time this most sacred season actually arrives, I want nothing to do with it.

Don't get me wrong, I'm no Grinch. I just haven't figured out how to make Christmas "work for me." A couple of seemingly random events are changing that.

I was grocery shopping Labor Day weekend, right after my birthday (one of those milestone ones I had actually been looking forward to). School had started a few days before and as my homeroom students shared birthday cake with me, some of them informed me I could be their grandma! While that would be a little bit of a stretch, it was possible.

So I was in a little bit of "a mood" when I headed out to shop. Arriving at the store, I grabbed a cart and started up and down the aisles. I came around the corner and found myself in the "seasonal" aisle, decorated for back-to-school, Halloween, Thanksgiving and Christmas. I was less than thrilled. Rather than try to turn myself and the cart around, I decided to proceed down the aisle as quickly as I could.

Two-thirds of the way down the aisle was a toddler, standing right in the center. He was gazing up and completely captivated. As there was no getting around him, I stopped to see what had captured the little one's attention. There, on the top of the shelves, was a Christmas tree decorated with hundreds of little lights. He stood completely still and silent, oblivious to me and all the other shoppers who had wandered into the aisle, just staring at those lights.

When his mom collected him and apologized for delaying all of us, I smiled, nodded and moved on. My mood lightened a bit, I continued grocery shopping, giving no further thought to the encounter.

Every Sunday for more than 20 years, my morning routine before Mass would include writing a letter to our community foundresses. Sometimes I would share insights; sometimes I would ask questions (like, "What were you folks thinking?"); sometimes I would give them "updates" on the community, or a general update on what I was up to those days.

A month or so after the grocery store encounter, I was derailed from that custom and from my usual Sunday morning Mass. That was when I discovered the beauty of evening Mass in the cold dark nights of fall and soon-to-be winter. The church was dark, as only moonlight streamed through the stained glass windows. And it was quiet as the gathering worshipers were few.

Sinking into that darkness and silence brought a peacefulness I'd not experienced before. When Mass began, only a few lights were turned on and the small group gathered close.

The return home found me in the driveway looking up at the stars, planets and moon — all points of light in the very dark sky. Going inside and turning on the lights seemed disruptive.

As the Christmas holidays approached, I reluctantly decided it was time to unpack some decorations. Our entire cul-de-sac puts up decorations, so there was some pressure on me to not be the local Grinch. I had a wire-and-light tree for the front yard, so up from the basement it came and into the yard it went. I hooked up the timer and waited for darkness.

When the timer clicked on and the tree lit up, I got teary looking at the simple tree. I remembered the grocery store toddler and my newfound enjoyment of evening Mass and coming home to starry nights. An idea was born.

In the holiday boxes, I found a few additional strings of lights and decided to put them up around the house. Now turning on the lights at night brought a calming effect from the soft glow of those light strings. I've decided the lights should remain for a while: A string hangs above the kitchen window, another around the picture window in the living room, and a final string in my bedroom. That final one I put on a timer so I both fall asleep and then awaken gently to those tiny, mesmerizing lights.

Theologically speaking, there are all kinds of interpretation of darkness, primarily referencing hiding from God. My experience is just the opposite. The darkness somehow brings God closer. I find comfort in those small colored points of light and the quiet.

What has all of this got to do with Christmas?

Yes, I will still tire of rehearsing Christmas music, but I wonder what message can I find in those songs?

Yes, "School-Halloween-Thanksgiving-Xmas" will continue to appear in the stores about the time of my birthday, but what might I see for the first time?

Yes, that quiet dark church before Mass might invite me into a more peaceful space, but will I allow it to change my relationships? Could I, like the grocery store toddler, simply be in awe?

Maybe my call right now, as I learn to make Christmas "work for me," is to gaze with intention, to look more closely. To know Emmanuel, God With Us, demands I be with God — and all of us.