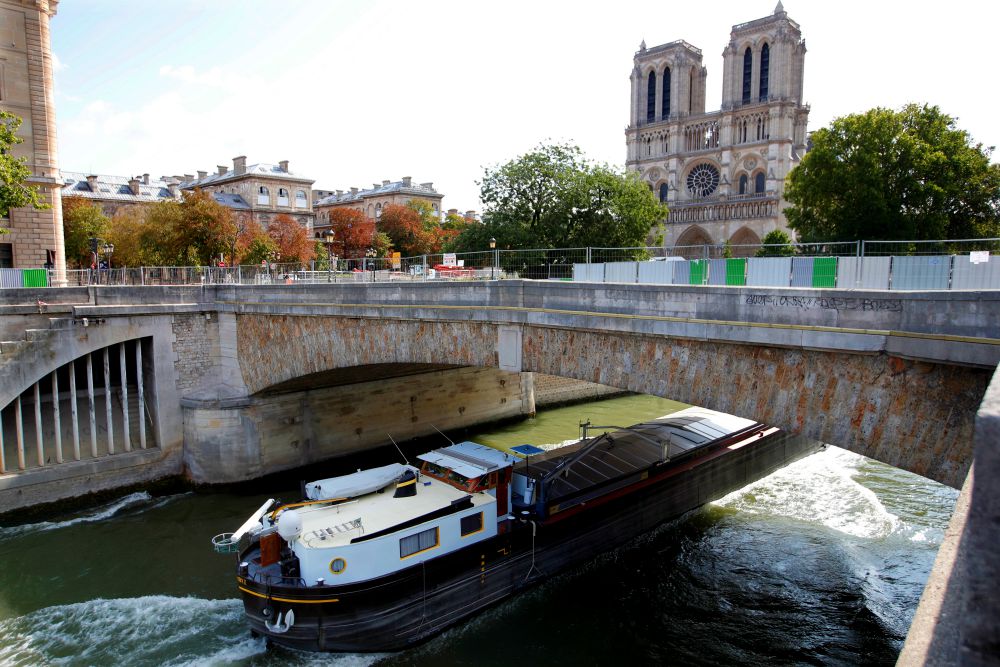 Fences are seen atop a bridge surrounding Notre Dame Cathedral in Paris Aug. 13 in preparation for a lead decontamination operation. Workers are preparing to decontaminate some Paris streets that have high levels of lead following the April 15 blaze that damaged the landmark. (CNS/Reuters/Charles Platiau)

With Pope Francis, the church has entered a new stage in the implementation of Vatican II, which emphasized synodality. That is why this pontificate has strengthened the power of the Synod of Bishops and increased the number of times it meets.

After the two synods on the family (2014 and 2015) and the synod on "Young People, the Faith and Vocational Discernment" October 2018, a Special Assembly of the Synod of Bishops on the Pan-Amazon Region will take place next in October 2019. Those main ecclesial events are part of a core synodal process to implement the missionary transformation of the church to continue the momentum of the Second Vatican Council.

In fact, as an Argentinian Jesuit, Pope Francis has been shaped by his South American experience, which is rooted in a theology of the people of God. He was elected to move forward the reform of the church. And he often recalls this perspective in his speeches:

What needs to be done today is to accompany the church in a deep spiritual renewal. I believe the Lord wants a change in the church. I have said many times that a perversion of the church today is clericalism. But fifty years ago, the Second Vatican Council said this clearly: the church is the People of God. Read number 12 of Lumen gentium. I know that the Lord wants the council to make headway in the church. Historians tell us that it takes a hundred years for a council to be applied. We are halfway there. So, if you want to help me, do whatever it takes to move the council forward in the church.

In one of his key texts, reading the "signs of the times," he clearly indicates the right course: "The world in which we live, and which we are called to love and serve, even with its contradictions, demands that the Church strengthen cooperation in all areas of her mission. It is precisely this path of synodality which God expects of the Church of the third millennium."

Synodality, "the constitutive dimension of the Church," taking the form of a "journey together" listening to the Spirit, is truly a key to the proclamation and transmission of the faith today.

The current crisis, with our awareness of the extent of sexual abuse and the urgency to fight against all forms of abuse, is also a kairos (a favorable time), which further underlines the challenge of getting out of clericalism.

Many of the faithful — especially young people and women — are strongly conscious that the church cannot continue as before. They call the church to change her way of functioning, to be a more synodal church. They ask priests and bishops to give them more space and more leadership. This voice of change was very strong during the synod on youth; young people want to be heard and want active involvement.

They also advocate for women's involvement:

The young also clamour for greater recognition and greater valuing of women in society and in the Church. Many women play an essential part in Christian communities, but often it is hard to involve them in decision-making processes, even when these do not require specific ministerial responsibilities. The absence of the feminine voice and perspective impoverishes debate and the Church's journey, depriving discernment of a precious contribution. The Synod recommends that everyone be made more aware of the urgency of an inevitable change, not least on the basis of anthropological and theological reflection on the reciprocity between men and women.

In this context, the strong shock of the fire at Notre-Dame de Paris has symbolized what the church is going through: a form of collapse of old structures. Dealing with the first issue at stake in listening to the victims of abuses, the church is following a path of truth that may be painful but salutary. For we have to recognize the truth and admit that the church is burning, wounded from within.

We have to humbly face what has been generated by these perverse practices, these devastating silences, these deadly dissimulations, these destructive abuses of powers. The idea that it is necessary to "repair the church" is also becoming more acute. This process of healing and reconstruction requires other ecclesial practices that are more collegial, more dialogical, more participatory, more inclusive. So that everyone — men and women, young and old — would be allowed to be actors and involved in decision-making processes.

Rebuilding the church so that she is more evangelical, more missionary, more synodal especially requires us to find ways to involve the poorest, the weakest and the most wounded. The church is the whole people of God. All the baptized are called to be missionary disciples, whatever their vocation.

To "repair the church," but even more to be witnesses of Christ in the cultures and languages of the 21st century, all the faithful are called to discern and chart together their paths of mission for today. It is important to find ways of acting together that translate concretely in each context this profound identity of the church that is "a missionary communion" rooted in the Trinitarian mystery.

Undoubtedly women today — who from the outset come putting "otherness" into the clerical system — want to be protagonists in the Catholic Church so that they can more widely share their gifts and charisms for the common good. They dream of a greater collaboration with clergymen in a spirit of mutual respect and reciprocity, as they know it is for a greater pastoral fruitfulness.

And among them women religious — through our experience of community life, community discernment, obedience lived as "a common listening of the Spirit" — have an essential role to play in promoting synodality. We have a duty to creatively share our expertise with the whole church and to be involved in forming lay people and pastors in discernment and synodality.

With so many lay people who aspire to take their full place in this synodal church, women religious have to help to implement the ecclesial practices of listening, service to all, humility and conversion, participation and co-responsibility. Thus synodality and discernment will be lived and displayed as the "missionary style" of the church today to address the current challenges.

[Nathalie Becquart is a member of the Xavière Sisters, Missionaries of Jesus Christ in France. She was director of the national office for youth evangelization and vocations at the french Bishops' conference from 2012 to 2018. Recently, Pope Francis appointed her, one of four women, as a consultor to the General Secretariat of the Synod of Bishops.]