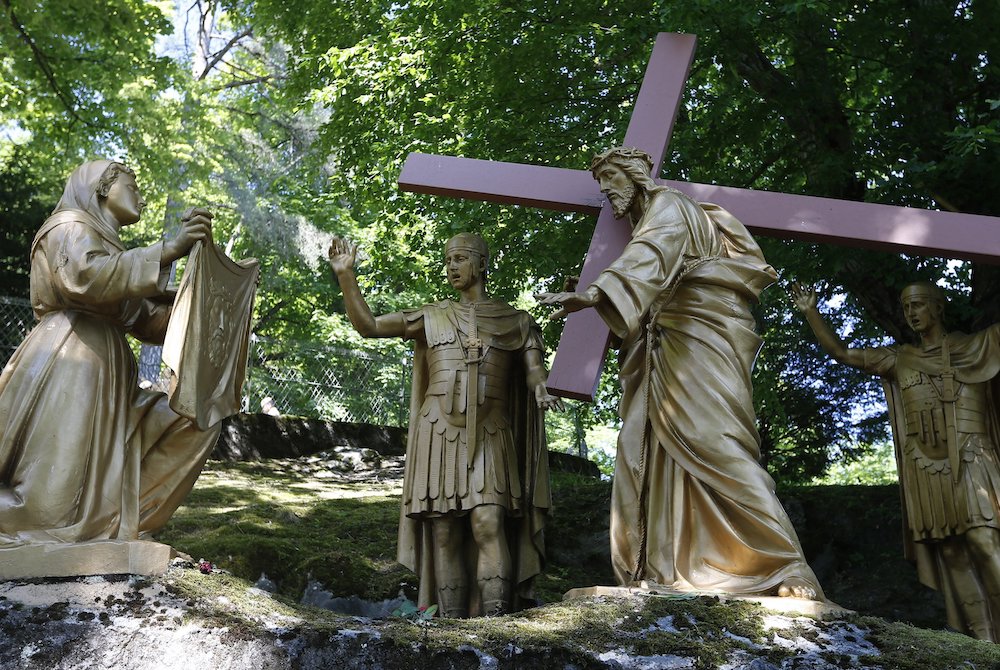 Veronica wipes the face of Jesus in this representation of the sixth Station of Cross at the Shrine of Our Lady of Lourdes in southwestern France. (CNS/Paul Haring)

Shocking! How could crucifixion — a shameful method of execution with its excruciating suffering — be considered kind?

It seems to me that the concept of kindness — one of the fruits of the Holy Spirit — is closely related to the Hebrew concept of mercy, which, like kindness, is an attitude as well as an action. Thus, it is not surprising that the word kindness appears 48 times in the Bible.

In a sense, one could say that the Catholic Church historically grew into a culture of the cross, not only in her spirituality but also in the tangible, as it is displayed on almost everything associated with our faith. Far too often people have obscenely abused this symbol (as in religious wars), yet it has more often comforted those dying as criminals, martyrs or ordinary Catholics. It has comforted Catholics who struggled and continue to struggle daily in this cruel, unjust world.

And one of the "tangibles" marked by the cross is the time-honored devotion known as the Stations. The central focus throughout the Stations is the cross.

The Stations or the Way of the Cross began its historical journey as a devotion during the 400s. This devotion grew and matured over many centuries, nurturing the faith of untold numbers of Catholics as the church grew and matured. Throughout this time, even still today, countless devotional pamphlets and books have been printed.

I hope my reflections on several of the Stations could be another way we religious sisters and nuns can encourage people during this time of great burdens. 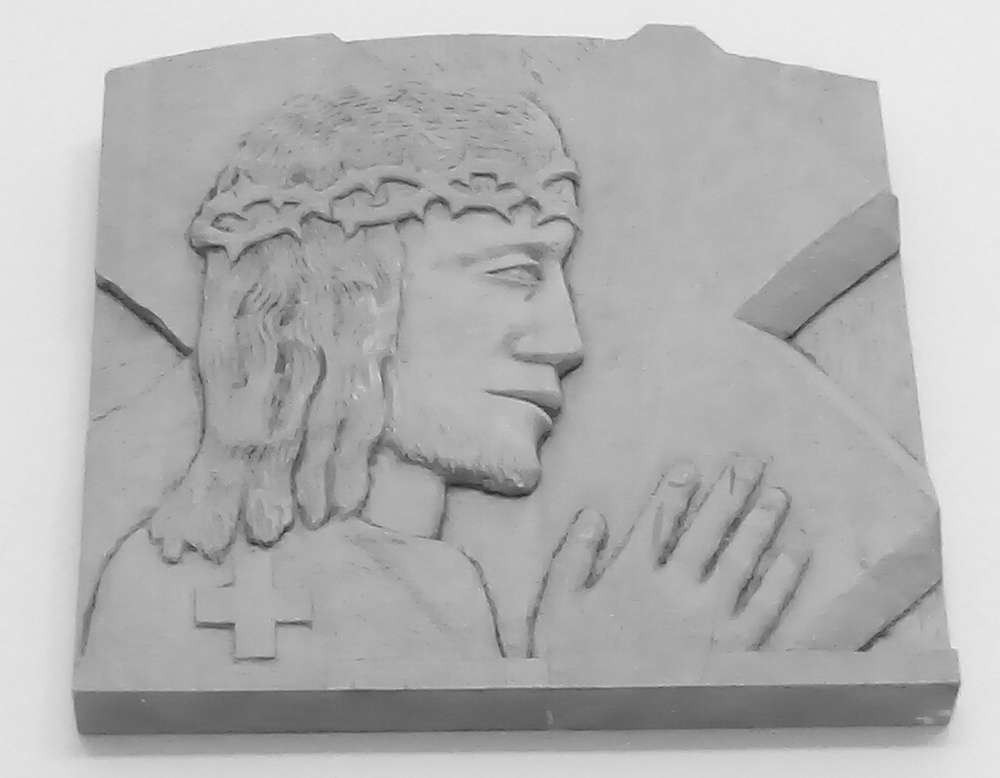 Carving of Station Two, "Jesus Accepts His Cross" by Sr. Brigid O'Neill in the motherhouse chapel of the Sisters of the Incarnate Word and Blessed Sacrament (Lou Ella Hickman)

When I was a novice, Sr. Brigid O'Neill was my directress. Lucky me! I often watched as she carved images of the Stations for our motherhouse chapel. I remember her telling me about her interpretation of the second station — Jesus accepts his cross.  For her, it was more than accepting or even embracing the cross; He caressed it. As she worked, she would describe how she wanted that caress to take shape in the wood: like the tender touch of the hand to the beloved, or a parent to a loved child.

This raises the question, would any one of us caress a gun pointed at us? Or a knife that would stab us in the back? Remember, Judas' kiss/caress was one of betrayal; Jesus' one of supreme love.

I have always been fascinated by the three stations where Jesus meets his mother, Simon and Veronica. Mary can do nothing but be present to her son. Simon helps Jesus finish his journey. Veronica, on the other hand, gives momentary relief. I picture Simon to be broad shouldered, perhaps a quiet man. Veronica is a woman of courage who does not flinch at the sight of suffering but responds with what she can do at that moment. I am sure several steps later, Jesus' blood will flow again and the sweat sting his eyes.

As with Simon, sometimes sharing another's cross can be long and slow, like caring for a parent with dementia. Then there are the Veronica times when one can give another only a small touch of kindness in the present moment. Finally, like Mary, there are times when our kindness can be only one of presence. What I find interesting is that this devotion incorporates both Scripture and tradition with the Simon and Veronica stations — tradition with a small "t." Both male and female are so close together on Jesus' journey — one forced, the other voluntary — as if they are saying all are included, all are needed.

Another two stations that speak to me are those that portray the events when Jesus was taken down from the cross and Jesus was placed in the tomb. Crucified criminals were left on their crosses after their death to warn those who saw them. That meant they also suffered a "second death" as their bodies were left to rot and/or became food for wild animals. Even if Jesus' body had remained on the cross, the resurrection would have still taken place, for all is possible to God. So why was Jesus taken down? On one level, Jesus' family and friends were loving and observant Jews who wanted to give Jesus his right to be buried. But I think it is more than this.

In Genesis, God tasks Adam with the naming of animals, thus giving them their identity. God is not a micro-manager. He wants his beloved creature to share in creation. Fast forward to St. Paul, who tells us that we make up for what is lacking the sufferings of Christ. I don't believe Paul thought Jesus' suffering was incomplete in some way. I believe he meant when we share in his suffering, we, too, share in the ongoing redemption of the world.

While Jesus' cry, God, why have you forsaken me? is not a station in and of itself, it fits into my meditation on them and gave me an insight that would change how I prayed. These words expressed his cry of solidarity with all humanity — and maybe the highest point of the incarnational mystery. When I read it, I was stunned as it gave me a different slant on the charism of my community, that is, "Our mission is two-fold: to adore the Incarnate Word and to evangelize by proclaiming the mystery of the Incarnation."

Not only did it change how I prayed; it changed how I express my own sense of solidarity with humanity.

One only is "King of Grief."
The oneing, she saw, the oneing
with Godhead opened Him utterly
to the pain of all minds, all bodies
—the sands of the sea, of the desert—
from first beginning
to last day.

Every sorrow and desolation
He saw and sorrowed in kinship.

Another American poet, Naomi Shihab Nye echoes this idea in her poem "Kindness."

Then it is only kindness that makes sense anymore,

The world is filled with people who experience Lent all year long, as well as those who endure Good Friday every day. It is a cliché to say our calling is to share their sorrow or the despair expressed by that why have you forsaken me? But because this cliché is so important, it needs to be repeated.

Solidarity with humanity is the lens through which we can pray the Stations (and any prayer) the next time we walk its way. Let us walk not only the Way of the Cross but also the way of kindness.

This story appears in the Lent feature series. View the full series.