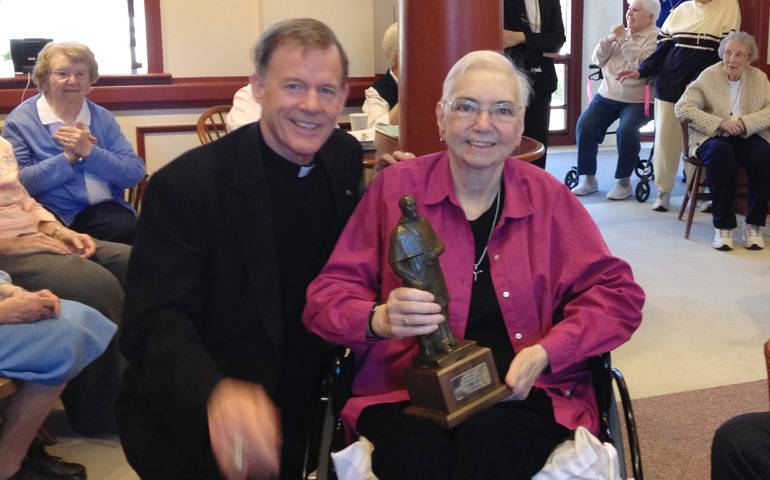 Mercy Sr. Mary Ann Walsh poses for a photo with her St. Francis de Sales Award on March 12 with Bishop John Wester in the community room at the Sisters of Mercy motherhouse in Albany, N.Y. (CNS / Helen Osman)

Sr. Mary Ann Walsh, a quiet nun with a keen wit who led a very public life as a journalist and a longtime spokeswoman for the U.S. Conference of Catholic Bishops, died on Tuesday after a tough battle with cancer.

She was 67 and died after five days in a hospice in Albany next to the regional convent of the Sisters of Mercy, the religious order she entered as a 17-year-old novice in 1964.

Walsh had moved to her native Albany from Washington in September after it was discovered that the cancer that had been in remission since 2010 had returned.

Sister Mary Ann, as she was known to the many journalists she sparred with, joked with and befriended, worked at the communications office of the American hierarchy for 20 years, retiring in the summer of 2014 just before she fell ill again.

She became director of media relations for the USCCB – the first woman to hold that position – after coordinating media for World Youth Day in Denver in 1993, which featured an enormously successful visit by Pope John Paul II.

That period of especially positive coverage for the Catholic church soon gave way to fraught years marked by growing internal divisions among the bishops and then, after 2002, the explosion of the clergy sexual abuse scandal. 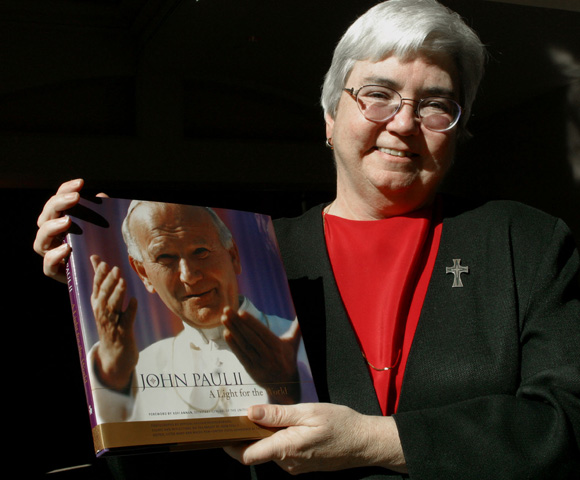 If it was a tough and frustrating job – Walsh joked privately that her service at the USCCB would cut years off her time in Purgatory – she did her job faithfully and effectively.

She was a straight-shooter who wasn't shy about letting journalists know when she thought they got a story wrong, and explaining just how wrong they had been, and suggesting how they might get it right the next time. This was done quietly, however; Walsh was at heart a private, almost shy person who was loath to draw attention to herself or embarrass others.

Walsh was born in Albany and as a high school student had been drawn to the Sisters of Mercy and their commitment of service to the poor, especially women and children.

Walsh entered the order during a period of great social upheaval in American society and in U.S. Catholicism after the reforms of the Second Vatican Council, and she was joining religious life just as many priests and nuns and brothers started leaving. 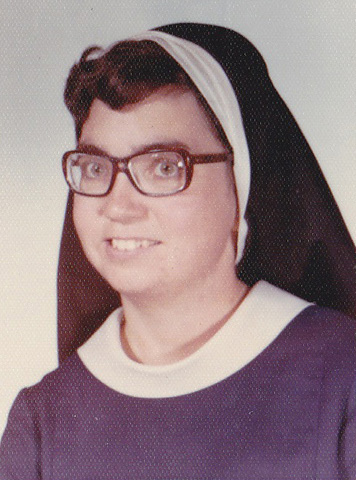 She worked as a correspondent for Catholic News Service in Rome and Washington before taking the USCCB job. Walsh coordinated media for the U.S. cardinals during the papal conclaves in 2005 and 2013, and she edited books on John Paul II and Benedict XVI. She also produced videos for the USCCB and regularly wrote op-eds in secular media outlets explaining and defending the hierarchy's positions.

But the constant media battles did take a toll, and Walsh – always clear-eyed about the shortcomings of the institutional church even as she sought to mitigate those failings – was especially upset about the Vatican criticism and investigation of the main leadership network of American nuns.

In July 2014, the Jesuit-run America magazine announced that Walsh would leave the USCCB to join the publication as a columnist and blogger. She was returning to her vocation of journalism and was thrilled at the opportunity, if a bit daunted.

"It's the ideal job, a job of opinion, after working in an institution [the USCCB] that thought opinion was anathema," she said in an interview with Catholic News Service in February.

But, she added, "It's an unusual feeling. . . . I don't think of myself as having some great opinion the world is waiting for."

In 2012, she had written a tribute in The Huffington Post to the sisters who helped her through her first bout with cancer, and her community once again rallied around her, moving Walsh back to Albany in mid-September last year.

Walsh seemed to find her voice even as her body failed. In one especially pointed column on the Vatican's investigation of the Leadership Conference of Women Religious, Walsh wrote that the Vatican should "just say 'Thank you' " to the nuns and end what "may be the most ill-fated controversy ever launched across the Tiber." 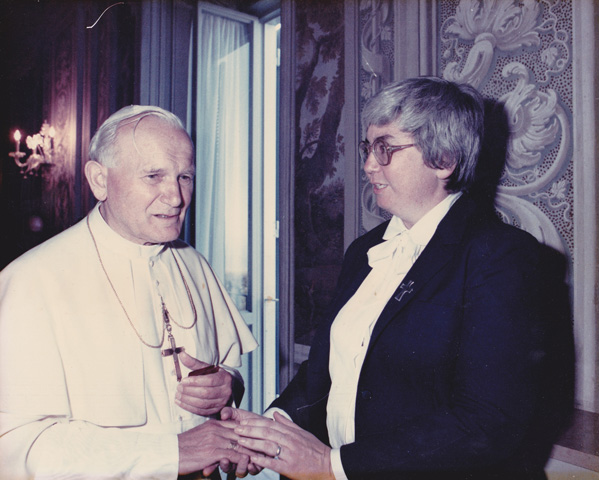 Walsh's "extraordinary commitment to pursuing integrity of word and deed through her writing continues even as she shares her personal illness," Sr. Patricia McDermott, president of the Institute of the Sisters of Mercy of the Americas, said at the time.

But Walsh was also, and always, a Catholic of deep faith and devotion, and that came through in her writing and her characteristic good humor.

Earlier this year, reflecting on her devotion to praying the rosary – sometimes the only task she could manage as she grew weaker – Walsh quipped that the Marian prayer became a serious habit during her commute in traffic in Washington. "I used to say that the rosary was my antidote to road rage," she said. "You can't swear and say a Hail Mary at the same time."