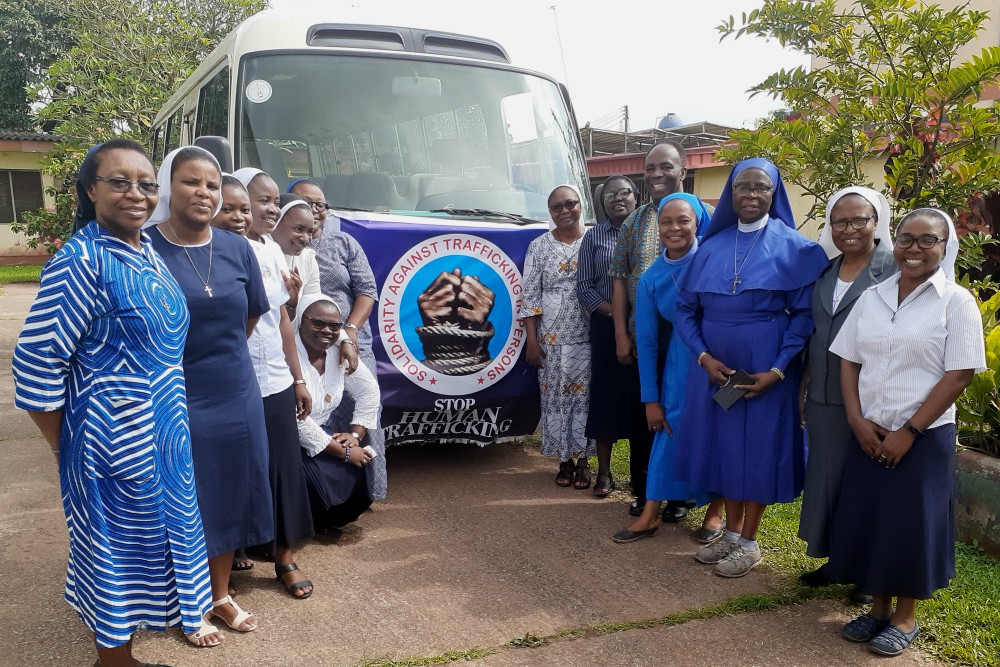 Sisters from different congregations get ready to travel to the Africa Faith and Justice Network-Nigeria advocacy drive in Edo State. (Provided photo)

Human trafficking involves a complex ring of agents — recruiters, transporters, airport and embassy officials — with false promises and enticing images of a life abroad. Their aim is to use trafficked persons for forced labor, sex, slavery and organ sales. The impact of being trafficked is to be permanently damaged for life — lost humanity, suffering and death.

Are these what we want for our lives? This was the message of Dominican Fr. Aniedi Okure during an advocacy drive by Africa Faith and Justice Network-Nigeria in Benin City, Edo State.

The Africa Faith and Justice Network-Nigeria (AFJN-N) helped to ensure that the human trafficking law was passed in Edo State, after AFJN-N met in the capital, Benin City, in November 2019, at a meeting with the theme of "Solidarity against trafficking in persons."

Our next step is to engage the state residents in fighting against human trafficking, so we — the women religious present from several different congregations — brainstormed to determine the best way to involve them, and how to check with the populace to see if they are aware of the law that was passed. We also want to determine the most effective way to combat the crime, in order to achieve our set goals:

The attorney general and minister of justice of Edo State, Professor Yinka Omoregbe, spoke at the gathering, promising that she would work toward simplifying the recently passed law against human trafficking so that the ordinary person in the street would understand it. The law focuses on arresting and prosecuting perpetrators.

She encouraged AFJN-N to continue in its advocacy drive, and will collaborate with AFJN-N for a better Edo State and Nigeria. The attorney urged parents to watch out for their children and try not to push them away.

In his keynote address, Okure focused on the image of an ordinary Nigerian, and described how we Nigerians have degraded and belittled ourselves in the eyes of our foreign counterparts, embracing everything that comes from them without questioning it.

He stressed the need for Nigerians to see themselves as dignified beings with all the endowed capacities to make a positive difference.

In order to make us understand how bad it is, he said that we have sold ourselves and our dignity for pieces of paper engraved with the image of dead people (money!), and those to whom we sell ourselves see us as slaves and senseless people. He quoted an Arab woman who said, "I cannot help it, but when I see an African, I see a slave."

No one comes to hurt you without the knowledge of someone within. There is always an insider. We are our own chief oppressors and slave owners. We see ourselves as inferiors and point an accusing finger at others, he stressed. Who are the ones who sell our girls, all in the name of making money? Who introduces our children to those who traffic them? We have agreed to market our children — who are the future of our nation. Where does our priority lie? In money?

According to Okure, the notion that Africa is overpopulated is propaganda spread mostly by people who are interested in what is under the ground — mineral and natural resources and other benefits they can get from Africa. Africa is the richest continent on earth, he said, so other countries come in disguise to "help" poor Africa.

He noted that when you fix the map of countries of the world that contain about half the world's population into the map of Africa, you will discover that the map will contain them and still have room. How do you reconcile that with the saying that "Africa is overpopulated," he asked?

A 2014 report from the International Labor Organization said that human trafficking generates huge profits — more than $32 billion a year. More than a third of that is from forced labor and about two-thirds from sexual exploitation.

And in 2019 the United Nations Office of Drugs and Crime reported that the number of trafficking victims is on the rise. This money is earned at the expense of our beloved brothers, sisters and children whose blood and human dignity have been sold for money.

We are all called to take a stand! In a quote widely attributed to Archbishop Fulton Sheen, "The tragedy of our time is that those who still believe in honesty lack fire and conviction, while those who believe in dishonesty are full of passionate conviction." The reactions of all present when they heard this were overwhelming. 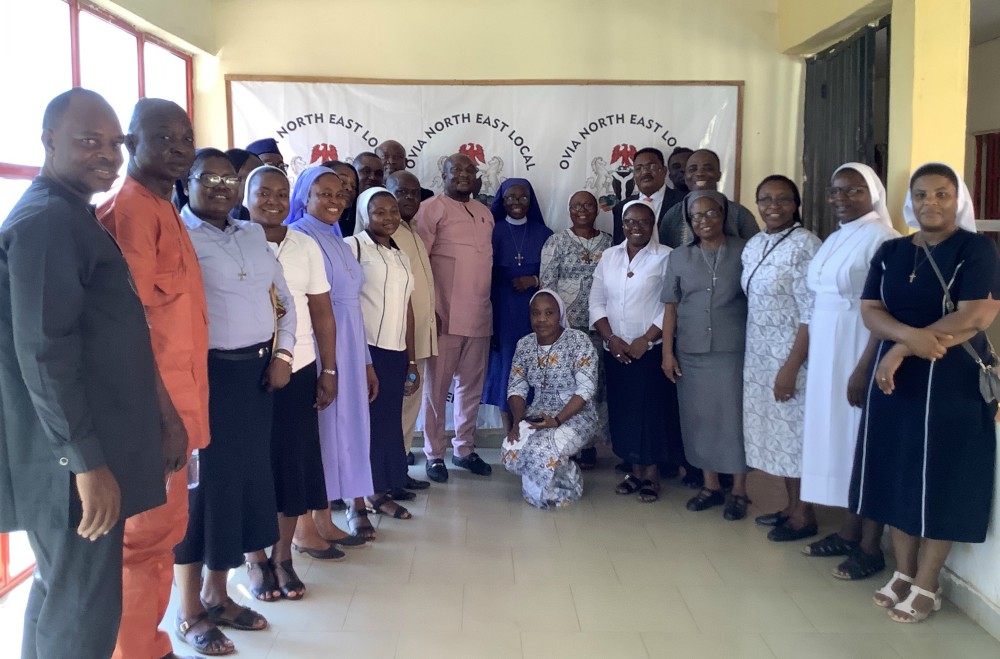 We could see the anger on their faces as they blamed the government for all the ills in our society. They were thinking that the government has the power to put an end to the epidemic called "trafficking" in whatever form. According to some of the participants, the government knows the perpetrators of this heinous crime and keeps quiet because of how much the government benefits from trafficking. In other words, they said that bad governance is the root cause of human trafficking.

But we know that poverty plays a role also. When youth have no work and no source of livelihood, they turn to crime.

The participants asked the leaders of AFJN-N to meet with the government, discuss the issue, and to find a way forward. AFJN-N has been having a lot of ongoing discussions with the government. It was as a result of their engagement with the state officials that the trafficking law was passed in Edo State. From there, they have come back to speak with those who can make changes at the level of the home.

This happened because some say that part of the blame falls on the home. Most parents don't have any idea what their children are doing, or the time to find out. Sometimes, the parents have lost control of their children and have no power to stop them. Some parents even support their children in a life of crime for the sake of money; in this case, family and value systems have been destroyed. And again, poverty can be blamed in the end.

But we can all make a difference, no matter how small.

Every good work deserves patience. At first, when we began the advocacy drive, those invited wouldn't come if it rained heavily! I was so glad to see the increase in the number who turned up. It was a great moment for me because I felt that some of the people were interested and finally ready to engage in the just fight against human trafficking.

[Teresa Anyabuike is a Sister of Notre Dame de Namur living in Ilorin, Kwara State, Nigeria. For a time, she was the coordinator of a Catholic community self-help association, a department of the Justice, Development and Peace Mission in the Ilorin Diocese. Currently, she is serving as a website manager for her congregation. She also manages her congregation's social media outreach.]