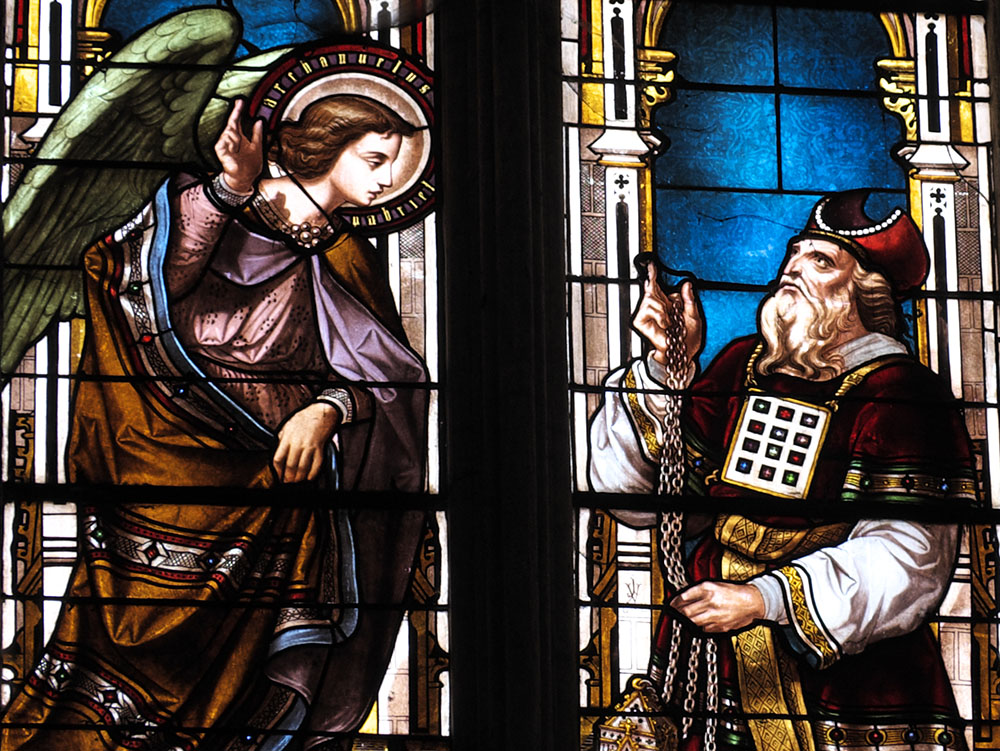 One of my favourite characters from the Advent readings is Elizabeth's husband, Zechariah. They say he was a priest, going about his priestly duties. But I bet he was depressed. Why do I say that? Well, he was there, day by day, doing his job and got no rewards for it. He had an elderly wife and no child — that is, no future. Who wouldn't be depressed?

Advent, we are told, is a time of expectation, of joyful waiting, of anticipation. But what about the times when life is not like that?

Aren't there times in our own lives when we just keep going on, doing the work, soldiering on, and not even wanting to stop and ask, "What's this all about?" We are scared that there may be a big void of meaning. We all have our Zechariah moments of depression.

Then God steps in and Zechariah's elderly wife becomes pregnant. Zechariah hears the news via an angel.

When I think of angels, I rarely think of feathery beings, floating around the sky, as is so often portrayed in Nativity scenes. For me, angels are those chance meetings, small encounters, overheard conversations maybe, or unexpected, sound advice from a friend. Those are my "angel moments."

Zechariah has one of these "visitations" from an angel. Is he overjoyed, running around telling everyone? No, his first reaction is of disbelief. "Who, me?" you can almost hear him saying. "You must be joking."

Isn't this often our own reaction to good news? It is as if we are programmed to receiving bad news first. I used to believe that this was a result of living in a nuclear age, and in a time when wars and catastrophes can be communicated to us with lightning speed. But when I see Zechariah's reaction, I see it is a more inbuilt human response.

And so, he is struck silent. Zechariah needs space and time to absorb, to reflect, to learn. Just like us.

There was a period in my life, around age 40, when I suffered from burnout. I had been working in Brazil for about 13 years and I was both mentally and physically exhausted. Luckily, someone wiser than me stepped in and I was given the respite I needed, a year's sabbatical program with the Sparkhill Dominican Sisters in upstate New York.

They rescued me and let me "be silent" for a year. I must be honest here and say it was not a silent period; there was a lot of group work, common prayer, laughter, and shared tasks. But inside I could be silent. I could do the work of lying fallow, letting my soil (and my soul) be nurtured again.

It certainly built me up and allowed me to return to Brazil and continue there happily until about five years ago.

Over and over again, I seem to be drawn into the same biblical theme — trust. Trust is also what gets us through the dark patches, or perhaps the foggy patches, of our own life.

"The more difficult things are, the more we must love, the more we must trust. Without God we can do nothing, but with God we can do all things." These are the words of Mother Mary Martin, foundress of the Medical Missionaries of Mary. She wrote these words in 1954, when she was building the hospital in Drogheda, Ireland, and she was receiving requests from all over the world for sisters to come and help in the medical field.

I am sure she had her "foggy" days, too, when the future was unclear, and she was torn between the needs in Ireland to build up the congregation and the needs overseas. She talks about a call to trust and to love. That's all.

It sounds so simple, but, as we know, the simple things can be demanding! I obviously need a bit more of it in my life if God keeps shoving examples in my face!

When Zechariah was ready, he was called to make a commitment: Name the child. "His name is John," he said, remembering what he heard from the angel. Now, Zechariah was sticking his neck out, flying against common custom. Everyone was expecting him to give the child his own name. Zechariah Junior, so to speak.

How often are we not also called, after a period of grace, to take a new stand, forge a new path, accept a new job? It seems to be the cycle of life.

And I learn from Zechariah. He did not say, grudgingly, "Oh, all right!" He broke out into a song of praise that we say every day at morning prayer: "Blessed be the Lord, the God of Israel."

Oh, yes, Zechariah is my Advent man. I wonder what he will teach me this year?