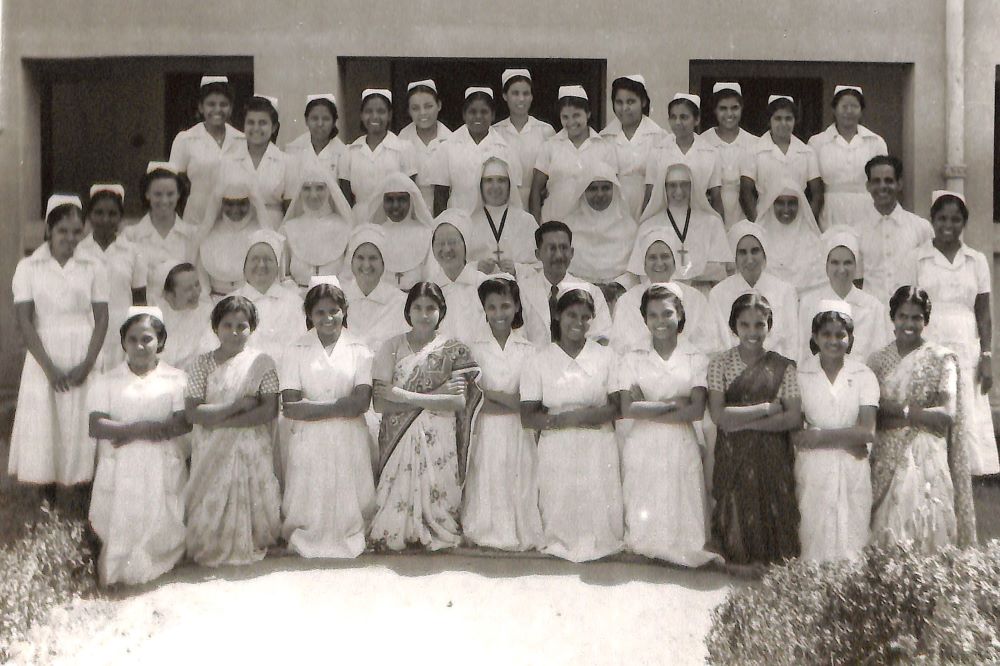 Members of the faculty and student body of the newly opened school of nursing at Nazareth Hospital in Mokama, India, in October 1953. The students are a mix of Indian women and nuns from other orders, pictured in full white veils and wimples, distinct from the sunbonnets worn by the Sisters of Charity of Nazareth. (Courtesy of Viking Press/Sisters of Charity of Nazareth Archival Center)

Jyoti Thottam, senior opinion editor at The New York Times, has written a widely praised history of a group of Sisters of Charity of Nazareth recently published by Viking, Sisters of Mokama: The Pioneering Women Who Brought Hope and Healing to India.

The work has its roots in family history: Thottam, who was born in India, grew up in Texas and now lives in Brooklyn, was curious about her mother's early life as a nurse trainee at Nazareth Hospital, established in 1947 in the town of Mokama.

The town is located in Bihar, an isolated and impoverished state in northeastern India that experienced great turmoil and violence during the 1947 partition that divided India into India and Pakistan. 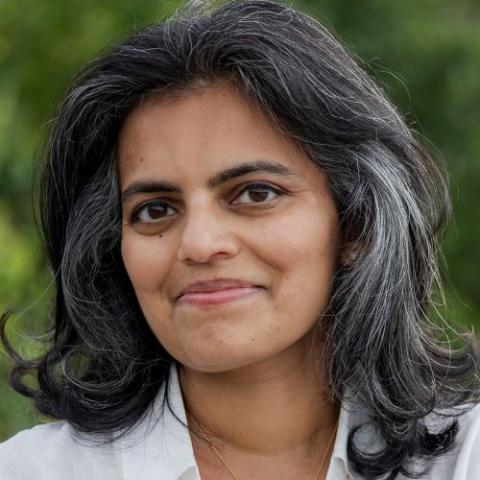 Jyoti Thottam, senior opinion editor of the New York Times, is the author of "Sisters of Mokama," a history of the Sisters of Charity of Nazareth's work in India. (Courtesy of Damon Winter)

The early experiences of Thottam's mother frames a book in which young Indian trainees and, later, Indian sisters found common purpose with the six American sisters who came from Kentucky and established the hospital.

Thottam's book is alive with revealing stories, including the sisters' persistence in not wanting their work to be subsumed by a Jesuit mission.

Though Thottam notes in her introduction that the women in the book "would never describe themselves as extraordinary," the publisher notes in a promotion that Nazareth Hospital "was a radical undertaking: it was run almost entirely by women, who insisted on giving the highest possible standard of care to everyone who walked through its doors, regardless of caste or religion." 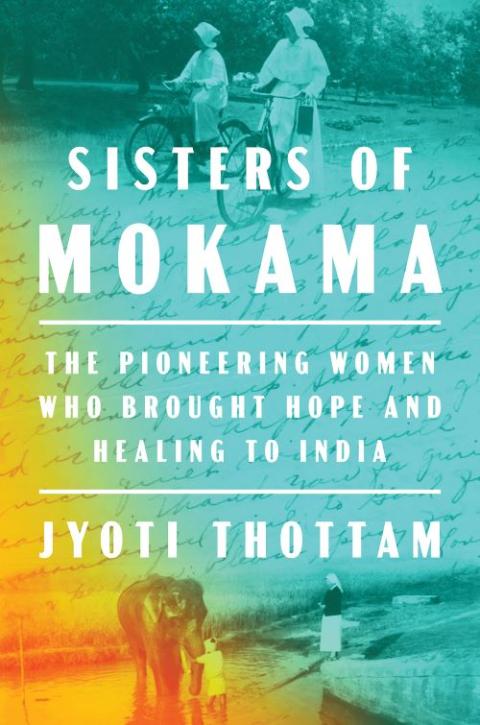 "Pain and loss were everywhere for the women of that time," the promotion notes, "but the collapse of the old orders provided the women of Nazareth Hospital with an opening — a chance to create for themselves lives that would never have been possible otherwise."

In an essay that appeared in The New York Times in April, Thottam wrote that the hospital, like India itself, has endured many challenges in the last 75 years: "Its presence, as an institution founded and run by women, stands as a challenge to those in power, a lasting reminder of those early years and that crystalline moment of hope."

The book is based on 20 years of research that began in 1998, continued intermittently in the following years and intensified in 2016. Though Thottam spent some time at the congregational motherhouse in Kentucky, much of her pre-pandemic research was with archival material the congregation provided digitally. 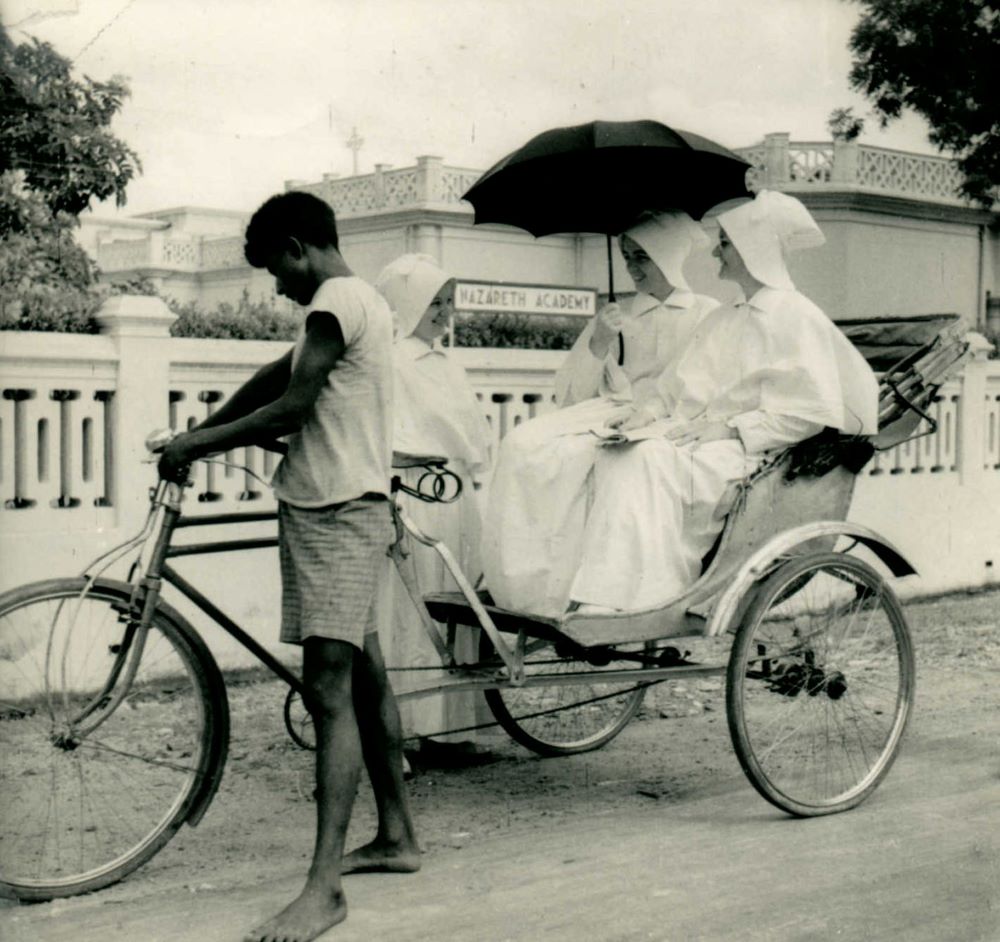 GSR: This is a broad question, but what do you think the book is about? How would you characterize it overall?

Thottam: I do think on some level, these two groups of women — the sisters from Kentucky and these young Indian women from villages in the south of India — discovered a thread that was common between them, which is that the hospital, the nursing school and the mission allowed them in different ways to claim their independence as women.

I think because the hospital was created at a time when everything was sort of new and there was so much that was uncertain in the country, it's as if these American women and the Indian women who worked there could make themselves into whatever they wanted to be.

It was a place where they could be free from the norms that had constrained them earlier. As I write in the first chapter of the book, although they were religious women, they were also women. They were coming from an America where women were still bound by certain norms around femininity and gender and what women could do in the world.

So this was an opportunity for them to move away from that and have an adventure and be out in the world. I think the Indian women in the story discovered the same thing.

I'd like to hear your own reaction to that tricky relationship between sisters and priests. Did that surprise you at all, or not really?

Well, it didn't surprise me, that delicate relationship between the priests and the sisters. It didn't surprise me in the sense that having gotten to know some of the sisters in this order, I knew from the beginning that they're just a very independent-minded group of women. So I wasn't totally surprised that was the approach that they took to starting this mission 75 years ago.

It was interesting to see that as I was reading through their letters and in the archives and then interviewing a lot of the sisters. I did want to try to capture some of what was left unsaid. It was between the lines of their letters where I could see that. 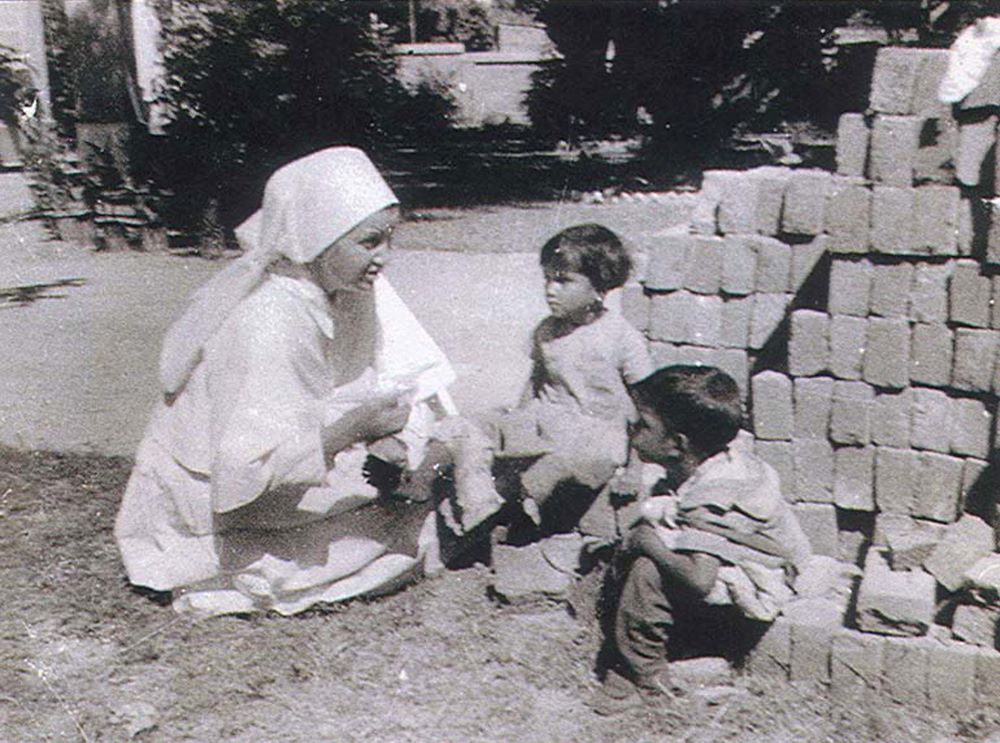 About three-quarters the way through the book, you talk about the early 1960s and how the sisters were trying to serve the poor while maintaining good relations with the authorities, like the police, who often oppressed the same people. That's a really tricky dynamic, isn't it?

It's something that's always been present for them. Ironically, I think because the sisters so carefully guard their independence, I think that has allowed them to strike that balance over so many decades. I mean, they're independent in the sense like they run their own institution. They've never allowed themselves to be aligned with any particular political party or caste group or anything else, which sometimes makes things difficult for them.

Their missions are always sort of self-sufficient, so they don't have access to a ton of resources and they're subject to the same kind of bureaucracies and things that any ordinary Indian person is. But I think because they've managed to do such good work for so long, their track record means that people in that community recognize, "OK, these are women who simply do their work. They know what they're doing. They're incredibly skilled. They understand this place and the people here."

They don't have another agenda, and I think they've managed to establish that quite clearly. I think that's a big part of the reason why they've been able to strike that balance.

How has the hospital fared in the last two years, given the pressures of COVID-19 and the pandemic?

Even before COVID, Nazareth had moved away from being a full-service hospital. They had been running it as an outpatient clinic. They were doing what they felt was the most needed work for the community before COVID. But then, once COVID hit and India had its worst experience of the pandemic much later than the U.S. did, there was intense pressure on the hospital to step up and meet that need.

They only had one doctor at the time, a sister who was a doctor. They've had for many years trouble finding doctors willing to serve in a place like Mokama. So they opened up the hospital as well as they could. And basically, the sister doctor was at one point working almost around the clock to do what she could.

There's a very moving description in the book about colonialism and its effect on the health of people under British colonial rule because health care was so poor and inadequate.

There have been many excellent books written about the legacy of colonialism and violence that Indians and other people who had been under British colonial rule had suffered, but I think one aspect of that violence in a sense is the way that people's health also suffered. And this is one part of the history that I really wanted to bring to light through this book.

You are a Catholic laywoman. What resonated for you the most in the research and writing of the book?

The thing that always resonated with me was how the sisters in the story never allowed themselves to be constrained by whatever else was going on in the Catholic Church. They were very determined in what they wanted to do, what their vision of being Catholic meant, what their mission meant and what it was trying to accomplish.

So I feel like, as a Catholic, that's a good lesson. We can express our faith in our own way in our communities, in our work, in our own practice in a way that endures, perhaps regardless of what else is going on in the church at the time.

What do you hope people carry away from the book?

I would just hope that anyone who reads this book might come away with an appreciation for what it was like to be a woman in this period, a woman really making her own way, whether that's a religious woman or the women who are nurses in this book.

In most American cities right now are hospitals full of immigrant women who are doing this work as nurses. And one of the things I wanted to do in this book was to give a fuller sense of what some of their stories might have been like, the incredible journeys they had gone through even before coming to the United States to gain that training and the courage that it took to do that.