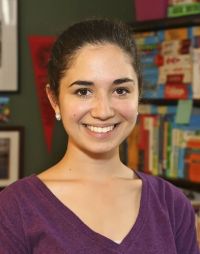 Mary Clare Mazzocchi is a 2014-2015 Dominican volunteer at Immaculate Conception Academy, an all-girls Cristo Rey high school in the Mission District of San Francisco. She graduated from the University of North Carolina at Chapel Hill in May 2014 with a degree in American studies and minors in philosophy and creative writing with highest honors. Her duties in ministry include assisting in the school’s admissions office, tutoring in an afterschool study session for girls on academic probation, and chaperoning students on their corporate work-study commutes.

Notes from the Field - It is hard to believe that this will be my final week of living in community with the 14 Mission San Jose Dominican sisters whom I have come to care for and respect so deeply this past year. Last week, a new sister moved into the convent, and her arrival got me thinking about one impressive and invaluable aspect of the community at Immaculate Conception Priory.

Notes from the Field - In my initial explorations of San Francisco after arriving here in August, one of the first unfamiliar things that struck me was the large and ubiquitous presence of the city’s homeless population.

Notes from the Field - After a short pause following the graduation of our seniors, San Francisco’s Immaculate Conception Academy is populated with students again this week as we begin our summer school classes. I am glad to see one student in particular because it means she is planning on returning next year.

Notes from the Field - This week, we will read a new encyclical from Pope Francis on the topics of Earth’s resources and environmental justice. In the Dominican Call to Justice, a document put forth by the North American Dominican Justice Promoters, climate justice is listed first in the series of issues to which congregations across the country should turn their attention.