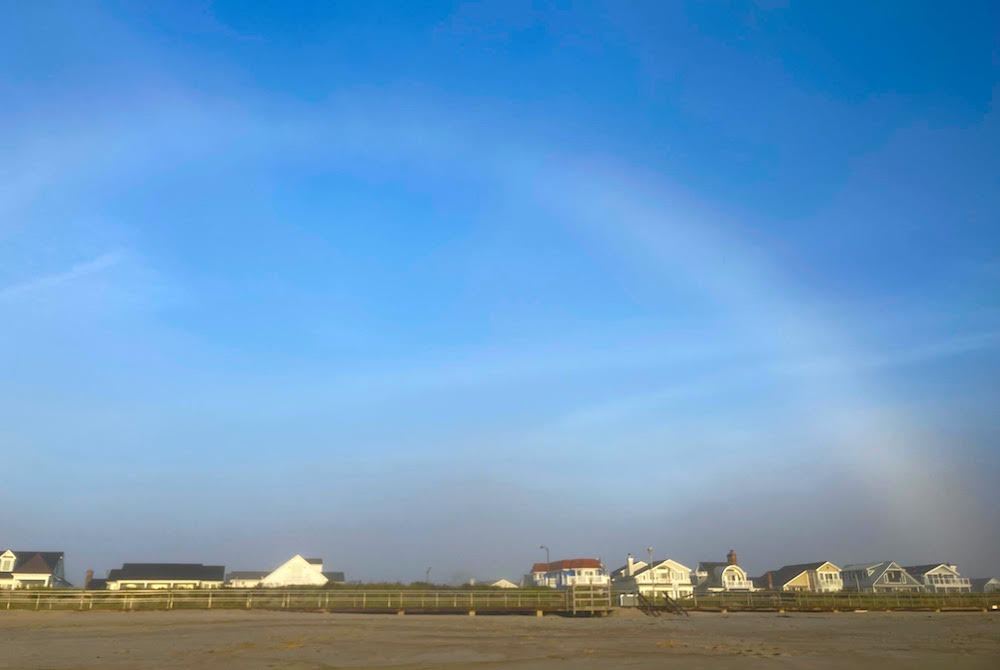 Wrack and practically ruined moon jellyfish collected on the beach one morning last fall. Picture the embroidered hems of flouncy dresses shed along the high-tide line by sea nymphs.

It was the week of the 2020 election and for days we'd been socked in by a fickle fog. One minute you could take vision for granted, the next minute there'd be no horizon. A storm off Bermuda, my surfer dentist told me, was responsible for the perfect waves, and phantasmagorical visibility.

The fog's payoff came at dawn one morning when the sun rose silver and cold. Instead of burning off the fog, it slipped right into it and cast a ghostly arc on the western sky. A fogbow, meteorologists call it — even rated a clue in The New York Times' crossword puzzle the next day. 54 Down: "Rare weather phenomenon that's white, unlike its colorful cousin."

No one I showed my photo to had ever seen one. A biologist friend mentioned seeing a moonbow once over Cumberland Falls in Kentucky. Conditions have to be just right for such planetary antics. And one needs to lift one's eyes skyward, religiously, not to miss these special effects.

The wrack, a common seaweed, arrived uprooted by storm surge from offshore beds, just as the moon jellies were sliding through the surf.

Shorn of menacing tentacles, they looked just like the chunky, round translucent wax that jam and jelly makers use to seal squished summer berries into mason jars. Upon close inspection a subtle design was visible — a sort of floral motif — embossed in gooey tissue or whatever jellyfish-ologists call the substance these beings boast as bodies.

Follow-up research proved these four modest oval petals to be the jellyfishes' gonads —  reproductive organs right there on the surface where a smile might appear on an upturned face. It's impossible to take Mother Nature too seriously when she consistently tries to pull off stuff like this.

Slow down now. It helps to read out loud: On the sand the jellies sparkled slightly silver —
scattered spangles/ in the tangles/ of long green algal ribbons. O! Algorithms.

In the sea this plant is strung from benthic depths to edible sunlight by bungee cord-like holdfasts. Its leafy substance is beaded with air-bladders to keep it afloat and reaching for the sky.

Now breathe. As if... just your nose was above water. In. Out. Remember?
Remember when there wasn't even water. Even air?
All there was was Mystery. Not even a colorless sky.

Then Nothing emptied itself into Everything.
Remember the blinding jolt of first-generation stars?  How molten Earth cooled into oceans and oceans broke the radical news of Life.

And there we were — the first cells of ourselves — alive — privileged with "local habitation and a name." (Shakespeare, "A Midsummer Night's Dream," Act V, Scene 1)
For two billion years all we had to do was float. Semi-permeable membranes did all the work.

Soon gills were all the rage. Remember fins? We swam in all directions at once glistening in scaly schools of intimate belonging — until
we hauled our seaworthy selves onto dry land — got retrofitted with lungs and legs.
Just a whiff ago in Earth-time.

But on to/ back to our time. It's brutal to read the morning news and brutal not to, leaving our doom-schooled imaginations space to make things even gloomier. With our conscientious eyes we search newspaper headlines for possible "sparks darting about through stubble." (Wisdom 3:7) We listen with ravenous ears for a poem —why not a love poem? — now that we've learned to abandon blind Obedience to unQuestioned truth.

No more does one single story — (emphatically! No story of dominion—colorless and partial) — serve to guide us. Let's mourn the loss quickly, and move on.

Remember when we walked out of Africa together? Dark hand in dark hand. There must be traveling songs still ringing the bells of our bones. Songs we sang to cheer us
as we traipsed through scorching savannas, leaving our birthland behind — and no horizon in sight.

We keep moving still, in every direction at once, passionately intent on — finding the right place to settle — settling on the right thing to do — in a moment when open spaces are closing and "to do" is no longer a simple active verb. And when it does "do something" it often comes naively close to violence — misdirected at someone — ourselves included.

Ourselves. O! an enlightened algorithm — ever evolving — deeper than scales and skin. Not a smear of same but each of us — each quirky rendering of life's malleable template — an image of Divine Creator — not finished yet. We. Are. Not Finished. Yet.
We evolve therefore WE AM. (Will grammar ever catch up with revolution?)

Clearly polemic can't.
Nor sermons that have tried their best to patch the boat they say "we're all in together."
Why does it feel like this boat's still sinking?

But wait... what if we found a jauntier metaphor?
What if this boat isn't big enough — with its gangplanks pulled up, and its precious few invited guests, and the two-by-two animals all over the deck scratching their heads?
Don't we want every person on board — the full cornucopia of creatures — not just mating pairs?

And this time let's not forget the forests with their mycorrhizal fungi, and the nitrogen-fixing clover. And who put an old man in charge? Don't we want a colorful crew who can steer by the stars and taste the way the wind blows?

We have a lot to think about. Rain continues in the forecast. And it's brutally clear we can't float this flood out.

But we can't just do something.

Why not settle down right here and write a poem?
Title: "Together"
How's this for a first line: Reach inside your heart and grab a piece of sky.
(You know — the patch with the rainbow in it. Remember the one we were promised? The one with every color — in nested arcs of hope.)

"A poem is an occasion for loving exchange of perceptions among the company summoned... Poems pitch persons toward one another full of news about being..."

Exactly what we need to hear: News about being — yours and mine. Who are you? Who do you say I am? What's life like for us on this planet? What if we ask the trees and the loggers and the logs; and the farmers and the microbiota that call the topsoil home; and the fish and the fisherfolk; and the oceans — trying to make sense of plastic bags.
Let's listen to the least of us and the beasts of us. What whiff of Earth is not kin? 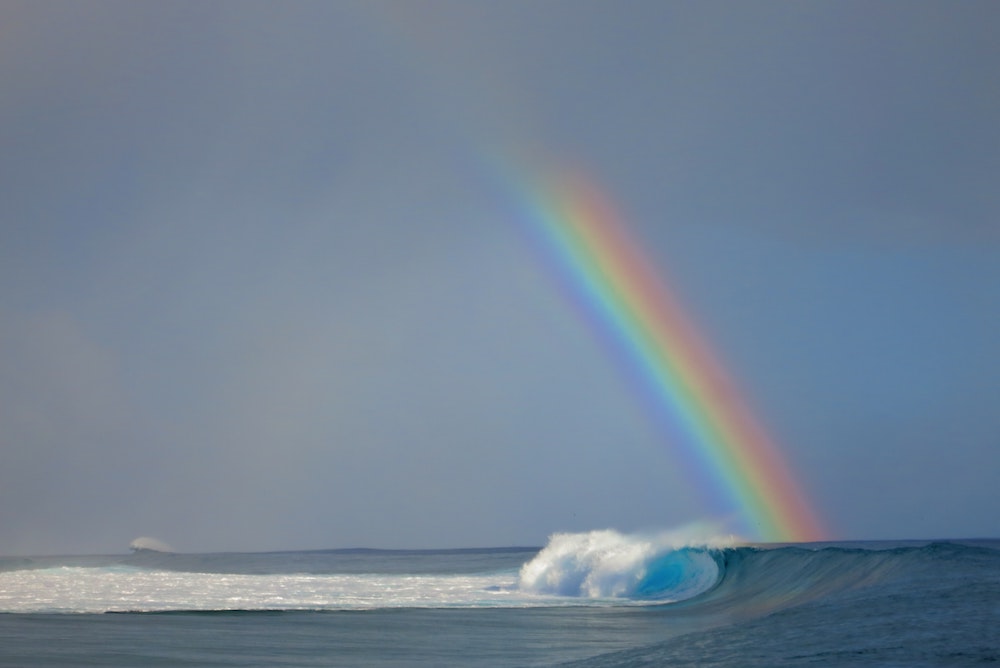 Reach inside and grab a piece of sky. (Unsplash/Lucie Dawson)

Listen. A new text is arising... "a new sentiment of textuality, which draws in the souls which have been scattered."

Scattered indeed! Picture us since last April: Stranded in our shelters, lonely and as out of place as jellyfish spat up on dry sand.

Poems are serious "sparks darting about through" (serious) "stubble."
(Will grammar ever catch up with epiphany?)

Poems shift focus by lovingly fiddling with language, like fog fiddles with vision. Poems blind us one moment so we can see what's right there in front of us the next.

Next line of poem: Palms up now.
(What really matters is right here, in the open hands and hearts of the company summoned.)

Next line is yours.

This is no ordinary time; no one of us can finish this stanza alone.
Why on Earth would any one want to?