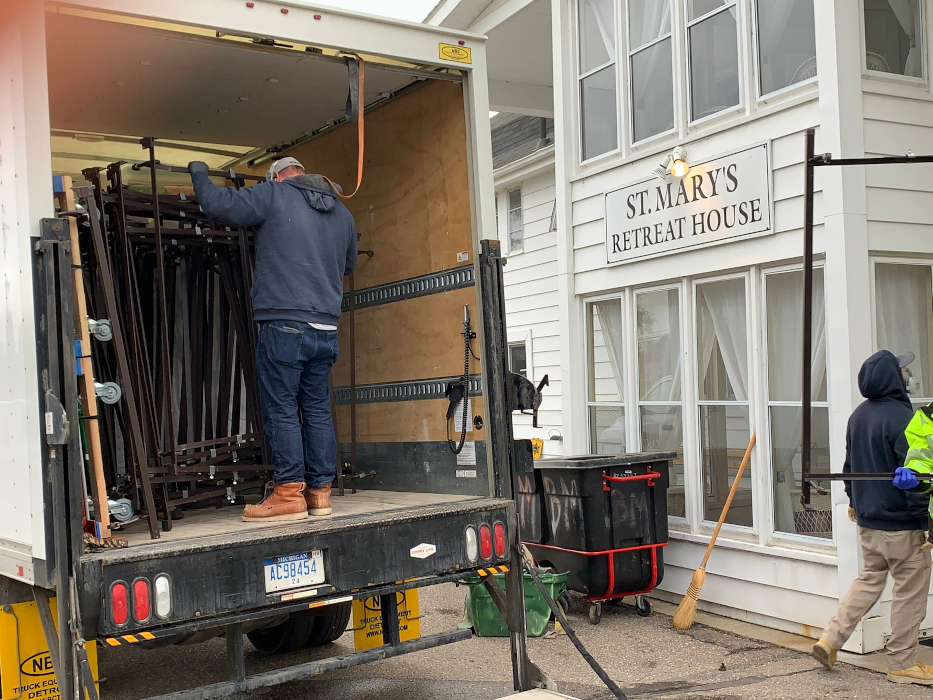 Movers load a truck with 60 beds, frames and linens March 30, 2020, from the recently closed St. Mary's Retreat House in Oxford, Mich., which will transport the items to an overflow facility for St. Joseph Mercy Hospital in Ypsilanti, Mich. St. Joseph Mercy Hospital is preparing an auxiliary space to quarantine those suspected of being infected with COVID-19, as numbers of the coronavirus continue to increase. (CNS/courtesy St. Mary's Retreat House)

The Dominican Sisters of Peace were putting their affairs in order, getting ready for their final act of service in Oxford, Michigan.

Want to share about your congregation or community? Submit an example we may use in future coverage.

In September 2019, the congregation voted to sell its motherhouse and grounds, including the St. Mary's Retreat House it has been operating for 60 years.

The sisters closed the retreat house March 8 — but God wasn't quite done yet.

Dominican Sister Rita Birzer, director and administrator of the retreat center, said the community was set to donate the center's beds and linens to the Ann Arbor-based nonprofit House Into Homes, until she received a phone call from Dave Raymond from Trinity Health.

"(He) also works with the group that provides homes for the homeless," Birzer told Detroit Catholic, the online news outlet of the Archdiocese of Detroit. "He knew about our beds, and knew they were trying to supply a place for an overflow facility for St. Joseph Mercy Hospital in Ypsilanti, but they didn't have any beds."

The 10,000-square-foot auxiliary facility, a former mental health institution, is being repurposed for patients and staff suspected of having the coronavirus to stay in quarantine if they have nowhere else to go.

"Basically, it's a 'just in case' scenario," said Raymond, director of planning and design at St. Joseph Mercy Health System. "St. Joseph Mercy in Ypsilanti is not in an overflow situation as of today. We pray we don't have to use it, but the indication is that we might have to if the numbers keep accelerating the way they are."

The beds donated by the Dominicans will furnish rooms Raymond said will resemble hotel rooms, complete with a desk, television, cable and internet access, and dining services for those in quarantine.

After the pandemic subsides, the beds will be used by House Into Homes, a nonprofit that assists homeless people in their transition to permanent housing.

"Sister Rita was so gracious and wanted to step up in any way she could," Raymond said. "We got there early to pick up the 60 beds, and they had all the chairs, desks, dressers, bedding, pillows and sheets all laid out, washed and ready to go. It's a joy to see people helping out, different community members stepping up, tackling this as a community and a family."

Birzer said she's glad the beds are being put to good use, one final act of service for the Oxford Dominicans to care for those in need.

"I think this is a sign that God is working with all of these events," Birzer said. "I received a note from one of the ladies who went on retreat (at St. Mary's) who was praying for the person who would next be in that room, using that bed. Many of them did that. I believed that many of these people who will use these beds will be prayed for by the people they don't know, but who are with them."