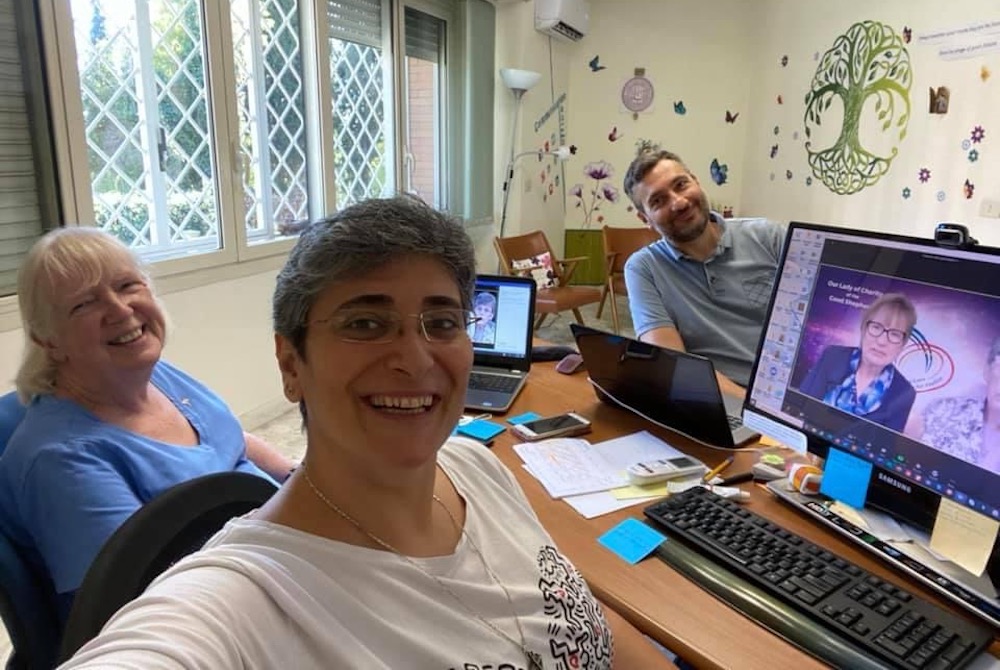 Good Shepherd Sr. Mary Farren, left, Good Shepherd Sr. Monique Tarabeh and technical consultant Marco Grottesi pause while working in Rome on the congregation's intercontinental assemblies, which were held virtually between August and October. (Courtesy of the Congregation of Our Lady of Charity of the Good Shepherd)

Including every sister from the Congregation of Our Lady of Charity of the Good Shepherd in every conversation about the community is impossible.

The congregation has 3,000 sisters in 72 countries, many of which have poor communication links, at best. Even the congregation's intercontinental assemblies, held the year before a general chapter to get input from sisters, usually draws only about 400 people to the motherhouse in Angers, France.

Then came COVID-19 and the age of the Zoom call. Instead of 400 taking part in one assembly, more than 1,300 people were able to participate in a series of assemblies from August to October.

Congregations of all sizes are learning that while it hurts not to be able to be together physically, virtual gatherings allow them to include many more sisters than ever before — even those too infirm to travel.

"All the feedback we got has been extremely positive," said Sr. Mary Farren, who helped organize this year's Good Shepherd assembly. "Not only did we get more people involved, we got people feeling that their voices were heard. We got a lot of comments from our lay partners that they were feeling included and were being listened to."

The in-person assemblies had been a great resource for decades, she said, but sisters who weren't there had to hear what happened from those who were.

"This way, people were hearing it themselves and were much more involved," she said. "The enthusiasm to keep moving forward was palpable."

The assemblies are critical because they help set the priorities that will be decided on at the chapter in the following year. But participation previously had to be limited.

"We're on five continents, so the major issues in different parts of the world are usually different," Farren said. "Our focus has always been the social outcast, especially women in poverty, but who the social outcast is in one country might be different than in another country."

Farren went to the order's generalate in Rome in mid-February to tutor novices learning English and found herself stuck there just two weeks later, when Italy went on a national lockdown to try to stop the spread of the coronavirus.

"There were about 20 of us in the house at the generalate, and not one of us carried an Italian passport," she said. "We were from all over the world but couldn't go anyplace."

The Congregation of Our Lady of Charity of the Good Shepherd's assembly had been scheduled for four 11-day sessions in June and July, but as the coronavirus continued to spread, it quickly became clear that 400 sisters traveling to France was out of the question.

Farren was supposed to return to the Boston area in May; she finally got home at the end of June. But she wasn't there long — leadership asked her to return to Rome in August to help organize a virtual assembly with Sr. Monique Tarabeh, the congregation's communication coordinator who works at the generalate in Rome.

In addition to the run-of-the-mill technical challenges, such as what platform to use and how to incorporate simultaneous translations, there were others, such as poor internet connections where many of the sisters serve and lack of proper computer equipment for when they did have internet access.

The Sisters of Charity of Nazareth, Kentucky, have faced similar issues since they began meeting virtually 12 years ago, before Zoom, Microsoft Teams and Google Meet.

In 2008, the order's chapter was for the first time going to be held not in Kentucky, but in Bangalore, India. So the congregation created its own television station of sorts to broadcast the proceedings via the internet to the sisters in the United States and elsewhere.

"We were really blessed when the pandemic broke out because it was really nothing new for us to do," said congregation president Sr. Sangeeta Ayithamattam.

Diane Curtis, the order's director of communications, said the 2008 broadcast was done on a shoestring budget with untrained sisters running the television cameras. By 2018, the congregation had advanced to holding a hybrid assembly, where instead of just watching a broadcast, sisters who couldn't travel to Bangalore could send messages and ask questions.

Over the last decade, the order moved to make sure every sister around the world has access to a computer, laptop or smartphone. So when 2020 made videoconferencing ubiquitous, even sisters who had been unsure about the technology at first were already comfortable with it.

"During the meeting, you saw all of them using their devices," Ayithamattam said. "Now, they're getting on for weekly prayer. You're seeing the connections happening not just for formal meetings, but really building relationships."

The sisters are so comfortable, in fact, that organizers have to build in about 30 minutes at the beginning of meetings for the sisters to catch up with each other.

"It was 'Brady Bunch' on steroids," Curtis said. "It was seven or eight pages of sisters, everyone visiting with each other."

A group of sisters who love to cook have started shooting cooking videos, and Tuesday prayer sessions that had been held in individual locations are now a global affair, with sisters around the world praying together.

"It is amazing to watch how we are woven so tightly together," Curtis said, "even when we're apart." 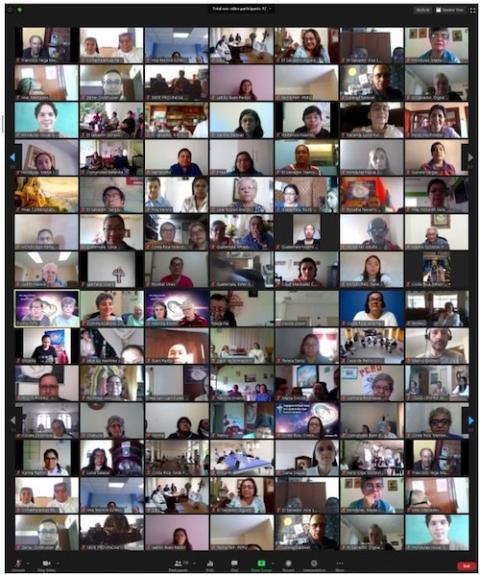 A screenshot from one of the Congregation of Our Lady of Charity of the Good Shepherd's intercontinental assemblies, which were held virtually between August and October (Provided photo)

"They're optional, but everyone comes," she said. "We don't do any business. We just talk to each other. Working from home — it is good, but it separates you and isolates you, so this is a way of coming together."

Staying connected has been especially critical for the Sisters For Christian Community, as the community does not have a motherhouse or other communal institutions. The order has been spread in a network around the world since its founding in 1970.

"I have wondered how people who are used to going to the motherhouse are handling" the inability to physically gather, said Sr. Rita Yeasted, the international communication coordinator. "It has kept them alive, but it's a tough way to live. We're in a very different situation. We're living the way we did from the beginning."

Because there is no central office, motherhouse or generalate for their community, the main job of the Sisters For Christian Community superior is to make sure sisters communicate with each other. Over the years, that has included newsletters; videotaping gatherings and mailing the tapes to Yahoo Groups, then an online discussion board; WhatsApp and blogs; and, now, Zoom and Google Meet.

"You want to make sure the sisters feel they're connected to the community," Yeasted said. "Just getting a newsletter six times a year wasn't going to do it."

She said the pandemic has made people realize how isolated many were even before lockdowns and travel bans.

There's people out there who were isolated before all this. If they don't feel they have the support and love and the concern from members of their own community, it makes it difficult to do the ministries we were called to do."
—Sr. Rita Yeasted

"We had to rethink what it means to keep in touch with people. There's people out there who were isolated before all this," Yeasted said. "If they don't feel they have the support and love and the concern from members of their own community, it makes it difficult to do the ministries we were called to do."

What remains unknown for the Good Shepherd sisters is next year's chapter. The Vatican has ruled that voting cannot be conducted through virtual gatherings, but no one knows whether they'll be able to travel and gather in large groups by the summer, when the chapter is usually held.

If the chapter is able to be held, Farren said the new technologies may allow sisters who are not delegates to watch the proceedings, but everything is still up in the air for now.

Ayithamattam said that whatever happens, connections are critical.

"We were all in our own provinces 30 years ago, but since then, we have said we are one congregation, so we started to build those relationships," she said. "Community is so important for us. Praying together, having a meal together; that is where community happens, I think, around the table. Now, that's happening in different ways."