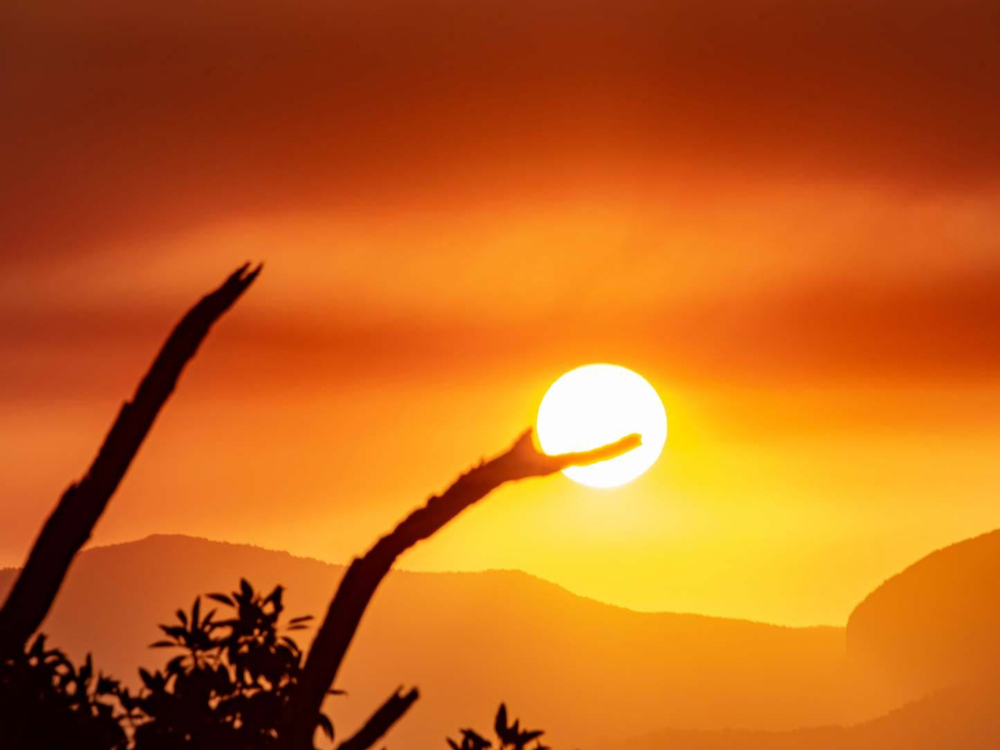 A sunset is seen amid the haze of smoke near Kingscliff, New South Wales, Australia. (Bryan Ricketts)

Over a hundred years ago, in her poem, "My Country," Dorothea Mackellar wrote of a "sunburnt country" — of her vast plains, droughts, of her fire and terror. Little could she have known how prophetic these last words would become, considering the devastation that today is sweeping across her beloved Australia.

Given present media and communication, few countries will have missed the videos, photos and news reports about the terrifying, unprecedented number of fires which are raging uncontrollably across our land as temperatures soar to record-breaking heights, destroying hundred of thousands of hectares of bush, millions of creatures who live here, many hundreds of homes, and tragically, also claiming people's lives.

Sr. Clare Nolan, leader of the Sisters of Charity of Australia, in writing to ask her sisters to pray, described our heart-breaking reality:

We have all watched, shocked, at the ferocity and the range of these dreadful fires. At this very difficult time for the entire country, we remember those who have been lost, and those who have lost family and community members. Also, we hold in our hearts those who have lost their homes and now face an uncertain New Year. As well, we mourn for the bush, which has lost untold millions of creatures, and their habitats.

We have been deeply moved by our courageous firefighters, putting their lives on the line, and have been saddened that some have died in doing so. In unprecedented evacuations, families have had to flee, taking shelter in designated centers or on beaches, often not knowing if their homes have been saved. Whole townships have been burnt. In some places, water systems, electricity and telecommunications have failed.

In fire areas, the sky is filled with an orange haze. The air is dark and full of smoke. The fires are fanned by strong, changing winds, leaving firefighters and people guessing from what direction the fires will come next, or if they will combine to become mega fires. Even long distances from the fires, the sun is clouded by an eerie smoke haze, which hangs heavily over large cities like Sydney and Canberra, but also has extended even across the Tasman Sea to New Zealand. There is no end in sight from these fires, which break out daily, nor indeed from our drought, unless we are gifted with soaking widespread rain.

We have been touched by the concern of so many for those in the path of these raging, swift-moving flames. Many people have opened their homes and offered shelter to those in need. Centers have been set up for the donation of household items. Millions of dollars have been raised by charitable organizations wishing to offer assistance.\

This terrible disaster raises for us the question of when our citizens and our government are going to officially acknowledge the reality of climate change and the implications this will have for our land and our economy. The traditional people of Australia, besides knowing the importance of back-burning — a fire control measure which they practiced for thousands of years — hold that nothing is more sacred than the land on which we walk, and that the land and its waterways always have to be protected. This surely must be an imperative and top priority for us as a nation!

Dorothea Mackellar, in this same poem, writes too of the beauty of this Great Southern Land and of her jewel-sea. This morning, as I was swimming, a few arms' lengths away a beautiful dolphin rose to greet me and the new dawn. In the midst of news of grim fire horrors, I was suddenly filled with joy and hope at the sight of this amazing creature.

We hold our beloved land and it people in our prayers, as we ask Our Lady Help of Christians, Patroness of Australia, the Land the Holy Spirit, to protect us and to ask her son to look on us with compassion.

Read this next: Australian Catholics seek prayers as fires continue in four states