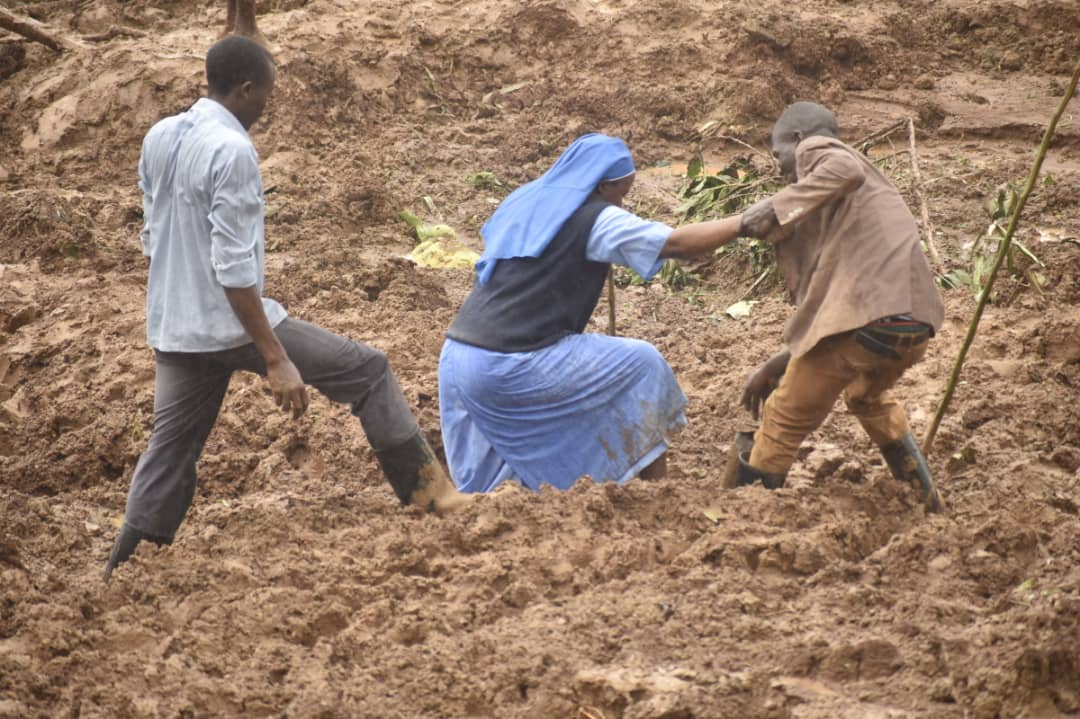 Catholic sisters have come to the aid of hundreds affected by flooding in East Africa. In Uganda Sr. Hilda Tushabe is assisted as she wades through mud to help villages. (Doreen Ajiambo)

Base Namae stood on a rocky cliff and stared in distress and stillness at what used to be her home and neighborhood in this remote mountainous village of eastern Uganda. The mounds of soil that perilously hung over the village are evidence of the night terror.

A landslide on Dec. 3 following heavy rains sent mud and debris crashing onto houses overnight, killing over 40 people and injuring scores in her community and neighboring villages in Bududa and Sironko districts in the eastern region of Uganda.

Namae lost four children in the landslide but managed to rescue her two other children. She is among hundreds who survived the landslide that deprived them of their loved ones and belongings.

"It's painful to lose children, but I want to thank God for saving my life," Namae, 34, said as she wiped the tears off her face. "It was my worst day. I could not save all my children because my husband had visited a relative. I saw mud and rocks slam and bury my children."

Namae is currently taking refuge with her remaining children at the Catholic church in Buwali where survivors were moved by Catholic sisters and local officials as they awaited news of their loved ones. Dozens of nuns battled thick mud and floodwaters across the remote areas of eastern Uganda to find survivors of a deadly river burst that submerged entire villages.

"We managed to rescue hundreds of survivors but the search was difficult and complicated due to heavy floods and mud," said Sr. Hilda Tushabe from the congregation of Bannabikira Sisters (Daughters of Mary). "We took most survivors to various churches and are stranded as they are living without food, beddings and clothing among other basic needs."

Flooding in eastern Africa has killed at least 280 people and affected over 2.8 million others between June and November, according to report issued Dec. 4 by the United Nations Office for the Coordination of Humanitarian Affairs (UN OCHA). The agency notes that thousands of homes, infrastructure and livelihoods have also been destroyed and damaged in the hardest-hit areas, and the risk of communicable diseases including cholera has been rising. The heavy rains were expected to persist through December and intensify in Kenya, Tanzania and Uganda, according to the agency.

Dozens of religious sisters in Kenya, Uganda and other East African countries volunteered to help save thousands of stranded residents, often long before official rescue teams could arrive at the scene.

In northern Kenya, Sr. Beatrice Nyaga and residents rescued hundreds of vulnerable students at St. Kevin Secondary School in the town of Lodwar when flooding engulfed the entire school, forcing some students to their rooftops to wait for rescue. No students were killed.

The floods destroyed classrooms, toilets, equipment and learning materials, said Nyaga. The school had accommodated more than 1,000 vulnerable children from the northern region, one of the poorest in the country.

"Our school was swept away by floodwater. We actually lost everything including furniture, books and laboratory equipment," said Nyaga, a member of Assumption Sisters of Nairobi who also heads the department of guidance and counseling. "We really need help to assist these vulnerable children so that they can go back to school. We were forced to close the school to fundraise for new furniture and learning materials."

Kenya has experienced an erratic weather pattern characterized by lengthy dry spells and destructive rains. The heavy rain has affected more than 160,000 people across the country. In northern Kenya where flooding has been intense, more than 132 people have reportedly died, including 72 killed by a landslide that buried their homes. 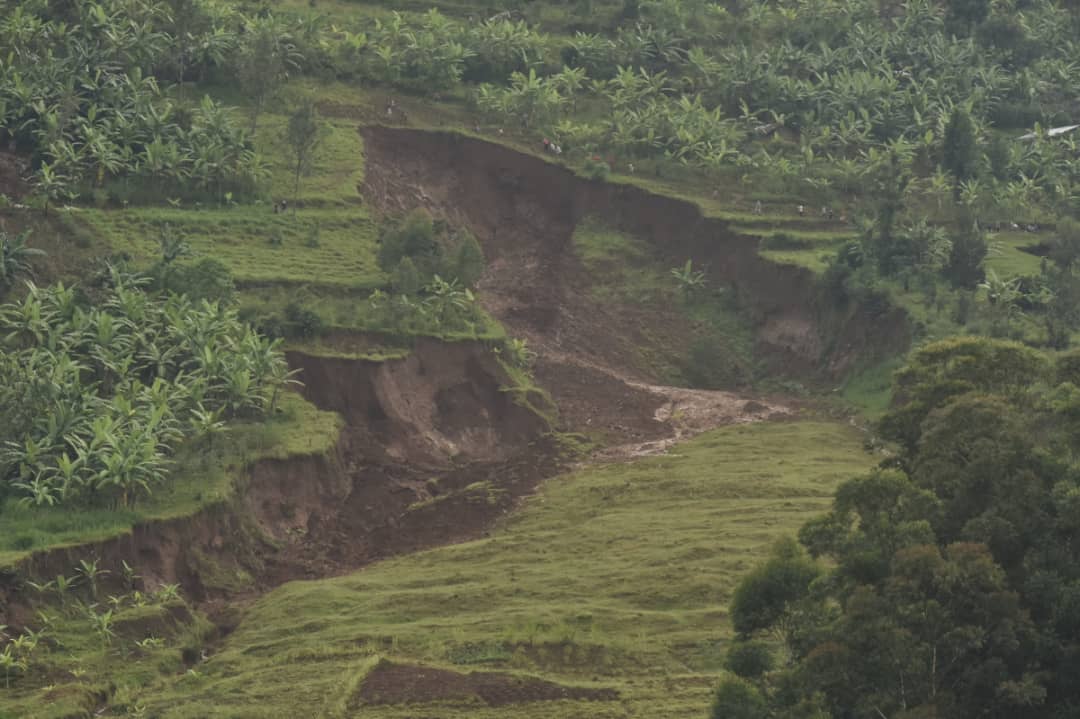 The scope of the landslide in this mountainous region of Uganda is massive, wiping away villages and killing dozens. Flooding destruction has been reported in Kenya, Tanzania and elsewhere. (Doreen Ajiambo)

In the Catholic diocese of Lodwar, Bishop Dominic Kimengich said the floods had caused massive crops and infrastructure destruction, urging people living in the affected areas to relocate to safer places to avoid further loss of lives. (Kimengich was recently named the bishop of Eldoret but is still in Lodwar.)

"We lost everything to the floods. The diocese needs financial support to help repair the school for vulnerable children and buy new furniture and learning materials," Kimengich told Global Sisters Report, noting that the damage is estimated to be over $100,000 (U.S.) dollars. "It's time we start taking care of the environment to avoid such incidents in the future."

There have also been landslides in the mountainous regions of the southwest and west near the borders with Rwanda and Democratic Republic of Congo. In Tanzania, floods have killed at least 50 people after days of heavy rain. The rain left homes damaged, roads blocked and bridges submerged.

In Djibouti, a country in the Horn of Africa, the United Nations agency report indicates that more than 250,000 people have also been affected by the rains that killed 9 people. 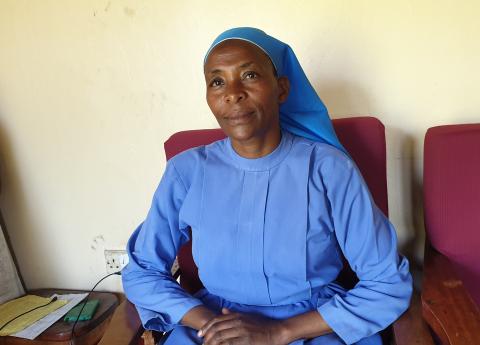 "In many areas, the floods are coming on the back of consecutive droughts, while in others people impacted by the floods are also suffering from conflict and violence," said the Office for the Coordination of Humanitarian Affairs. "As families struggle to cope with these compounding and complex shocks, there is a high risk of their adopting negative coping mechanisms, including school drop-out and early marriage."

"It was difficult to access those flood and mud areas, but we are happy because we have managed to save hundreds of lives," said Tushabe, who is from a different region of the country and on missionary work in eastern Uganda. "As religious sisters we have been called to serve the poor and help those who are in need like the flood and landslide victims."

Sr. Esther Mwango was equally concerned about the fate of the community. She attributed the rampant landslides in the region to the large swaths on the slopes of Ugandan mountains that have been denuded of their forests and other vegetation cover for cultivable land, increasing the risk of landslides.

Continuous establishment of amenities such as water, schools and health facilities in the highlands has turned out to be compelling factors for settlement, she noted. 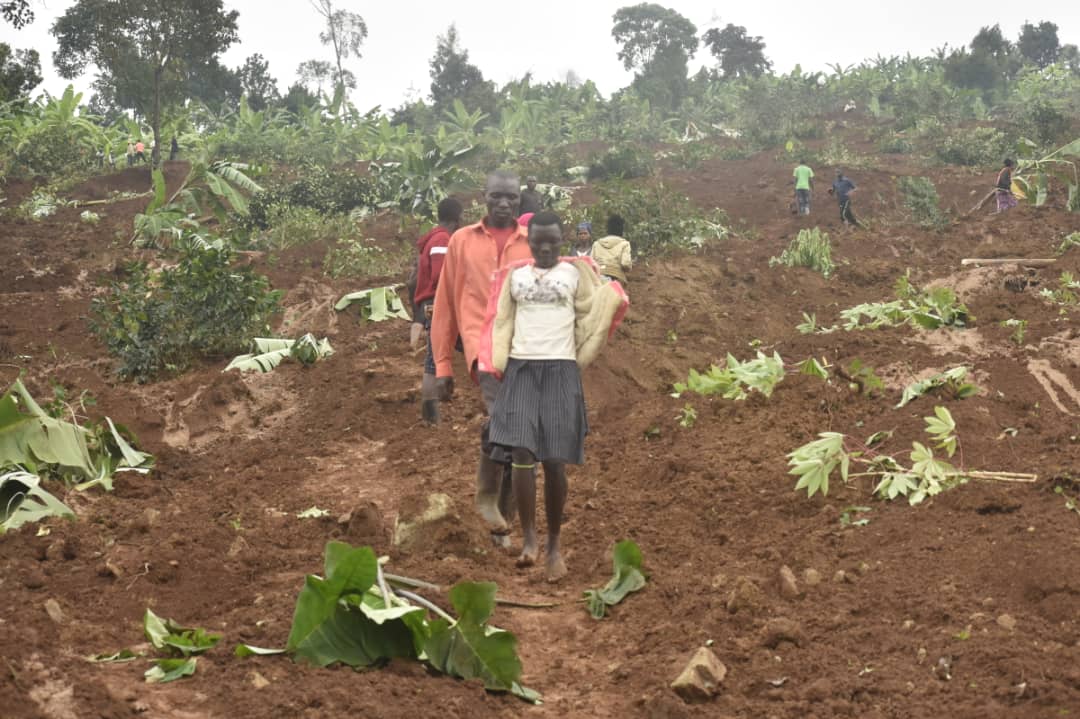 Survivors of the floods in eastern Uganda look out over the remains of their village. Catholic sisters in Uganda, Kenya and elsewhere have been aiding survivors while coping with the loss of schools and other properties. (Doreen Ajiambo)

"I urge the government and relevant authorities to conduct mass community sensitization to enlighten them on the need to move to safer places," said Mwango, who is also from the congregation of Bannabikira Sisters (Daughters of Mary). "The government should also fast track the resettlement of those living in high risk areas to safer areas."

Local officials appealed for help saying many people lost their livestock, farm products, houses, coffee trees and other crops and the survivors are now staying with nearby relatives, in the churches and public schools.

"Victims have no food for eating, beddings, domestic materials, clothing to use and this is putting them at much greater risk of getting disease like malaria and other illness that are related to coldness and hunger," said George Nambale, a local government official who oversees the Bududa district.

Robert Makuma, a 24-year-old resident who lost his parents and three siblings from Naposhi village in the Bududa district said he and others from his village are helplessly stranded in their sister's small hut. 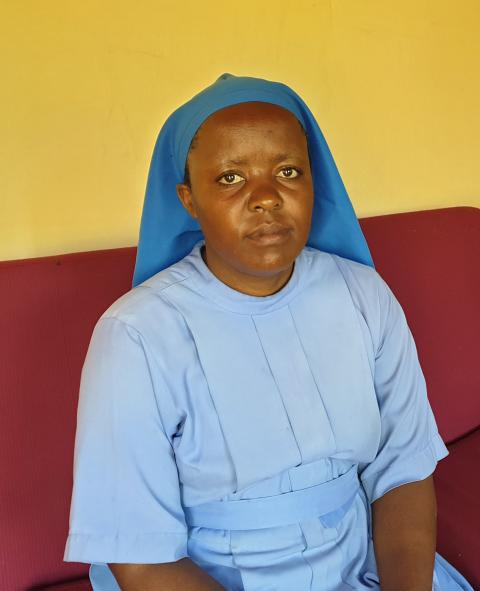 He is urging the government and well-wishers to provide them with food and safe water for drinking as they wait to relocate.

"We are 14 people currently staying with our elder sister who is taking care of us," he lamented. "We are having only one meal in the day because of an increased number in the family and this is becoming a big burden for her since she is not all that well."

For now, Namae, who lost her four children, wants the government to solve the issue of floods and landslide that has affected her area for years. At least 100 people were killed in a landslide in Bududa in March 2010. In 2012, landslides destroyed three villages in the region. There are frequent landslides when the rainy season starts in eastern Uganda.

"We can't continue to die every year when rain season comes," said Namae, who reportedly buried her five relatives last year when landslide hit the area. "We need a solution to this problem and the government should help us before another landslide strikes again."

Gerald Matembu contributed to this reporting.

[Doreen Ajiambo is a multi-media journalist based in Nairobi, Kenya. She covers religion, refugees and politics stories from East Africa and beyond for various outlets in Europe.]