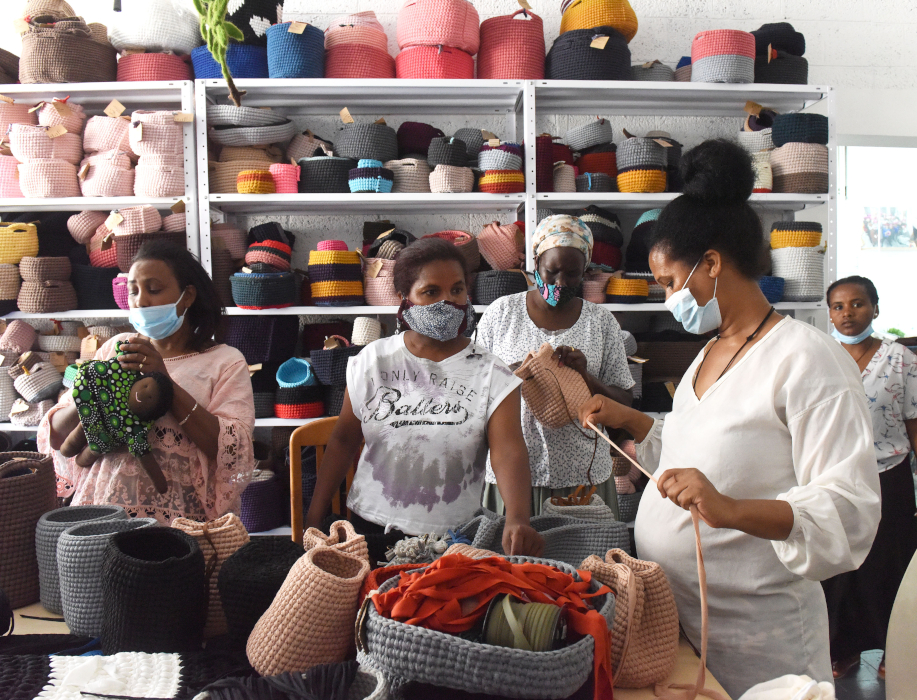 Inside Kuchinate, the African Women Refugee collective, women dropped off their completed sewing and crochet work, receiving new material to work on at home.

Eden Gebre, 30, one of the members of the cooperative who has been in Israel for eight years, made note of their work and answered questions as she gave them more material.

Some slipped in to speak privately with the co-founders Diddy Mymin Kahn and Comboni Sr. Azezet Kidane, known to everyone as Sister Azeeza.

The collective, supported by several Catholic charities — including the Pontifical Mission, the Comboni Sisters, Spanish Manos Unidas and a parish in Switzerland, has been providing a source of income and support for Israel's most vulnerable population of African women asylum-seekers, and its work has become even more critical during the COVID-19 pandemic.

Just before the second round of COVID-19 infections hit Israel in June, the collective took part in an exhibition and a much-needed pop-up shop to sell its hand-crafted baskets and bags, to try to take make up for the sales it lost because of a three-month lockdown.

The collective has 200 active women members who also come in for psychosocial assistance.

"It has been difficult now. There have been no meetings [at Kuchinate]. Some people can't work because they have a lot of children at home. Before we had lots of groups who would pay to come to our workshops [and buy our products]," said Gebre, a mother of three, who recently underwent a liver transplant and was unable to work during the first quarantine period. Her husband suffers from asthma and is not working.

Mainly from Eritrea, the women reached Israel after perilous journeys through Sudan and Egypt, where they survived human trafficking, torture and rape.

The pandemic has compounded many of their fears and traumatic memories have resurfaced, said Kahn, a clinical psychologist and trauma specialist originally from South Africa.

During the pandemic, the women "were terrified of being infected; it was a survival issue," Kahn said, noting that the donations have enabled them to give food vouchers to their members. "A global pandemic can take on (wider proportions) for survivors of human trafficking and torture. They already have 100 kilos of weight on their back, this makes their load heavier." 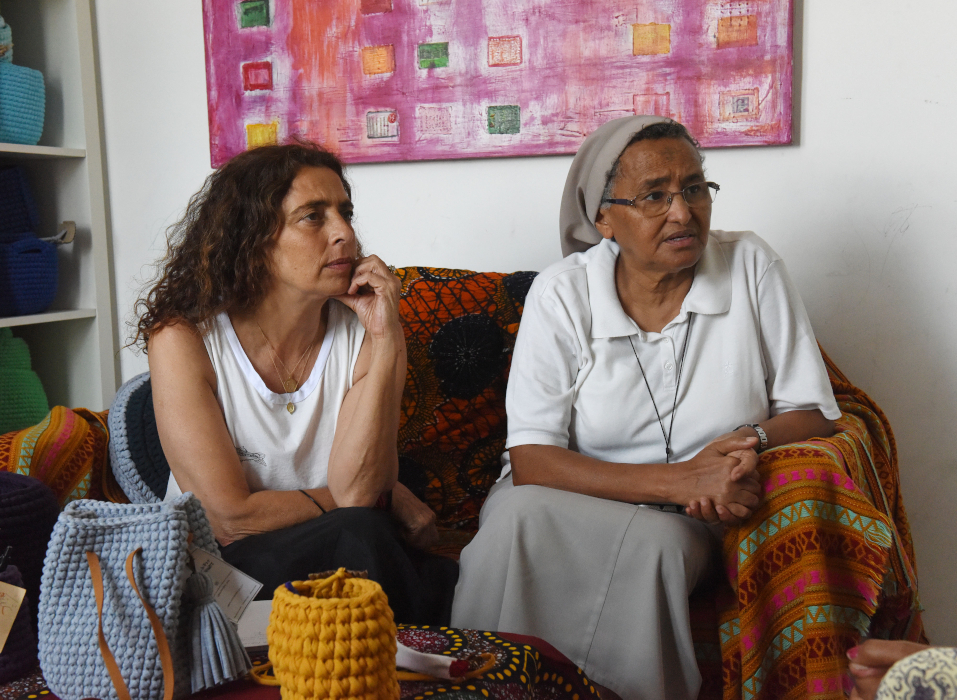 Kuchinate co-founders Diddy Mymin Kahn and Comboni Sister Azezet Kidane are seen in Kuchinate, the African Women Refugee collective, in Tel Aviv, Israel, July 14, 2020. Many of the asylum-seekers they help have been victims of human traffickers. (CNS/Debbie Hill)

Selam Gonets, 29, has three children and just returned to work at Kuchinate after her husband came out of quarantine at a hotel provided by the Israeli government. During that time, when neither of them was working, her biggest fear was that her family would be evicted from their apartment because she was unable to pay rent. Now she is the sole wage earner because her husband was laid off from his job.

As unrecognized asylum-seekers, they are not eligible for any of the unemployment packages the government has been providing.

At the beginning of the pandemic, Kuchinate began stockpiling material to deliver to the workers. The women had just learned how to sew and use sewing machines so were easily able to begin producing face masks from home. They also started sewing dolls of color for the children of the asylum-seeker community.

The masks are doing very well, said Kahn, and the dolls are sold on their online store as a way people can make a donation to the children of the asylum-seeker community.

"It was like God knew what the women [would] need and he opened a gate for them," said Kidane. She also provides spiritual support for the women, often praying over the phone with them and sending messages of hope on Whatsapp groups.

Kidane is like a mother to the women, said Gebre, and together with Kahn has helped her believe in her own strength and capabilities. Now she is able to speak to the other women to support them to move forward.

"I tell them that we will never advance if we think only about the things that we have experienced," said Gebre, who spent six months in an Egyptian jail, where she was shot and beaten. "Because I believe I am strong, I can give (others) help with all my heart. I tell them that now I can help them, but they don't have to wait for help every day. Every person has something small they can do if we only believe in our heads that we want to be strong, that we want to work."