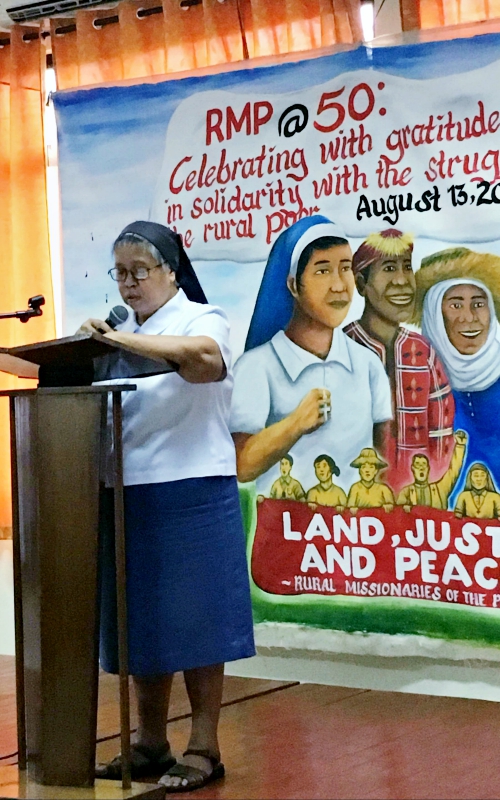 Sr. Emma Teresita Cupin of the Missionary Sisters of Mary gives her speech at the 50th founding anniversary celebration of the Rural Missionaries of the Philippines Aug. 13. (Provided photo)

Editor's note: This column is based partly on the author's speech given at the 50th founding anniversary of the Rural Missionaries of the Philippines, Aug. 13, 2019, translated from the original Filipino. 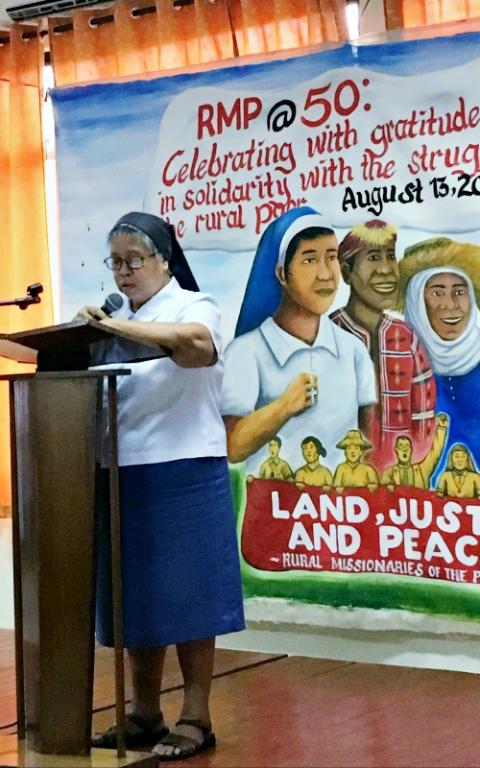 Sr. Emma Teresita Cupin of the Missionary Sisters of Mary gives her speech at the 50th founding anniversary celebration of the Rural Missionaries of the Philippines Aug. 13. (Provided photo)

As a Missionary of Mary sister, I have also been a member of the Rural Missionaries of the Philippines (RMP, an intercongregational, interdiocesan organization) for 33 years now. Currently, I am facing two trumped-up court cases filed against me: robbery-arson and perjury. My lay co-workers tease me by saying that I may hold a world record — the nun slapped with the most number of lawsuits in one year.

I face these charges because I — we — have stood for the truth, for justice and for the rural poor, and I do not regret having joined the RMP.

When I first decided to become a nun, I never thought that it would turn out like this. After many years of teaching, I felt that I was already very tired. I wanted a peaceful life, without stress, without any big problems. So I thought of becoming a nun. I was thinking then of what my life would be: a day entirely spent on prayer, a peaceful life.

I entered one congregation for a year, but did not stay. I felt that something was missing.

After one month, I was assigned to teach in Diatagon Catholic High School. There, many Missionary Sisters of Mary were joining the protest actions in Tandag against the dictatorship of Ferdinand Marcos. Among them was the school principal, Sr. Amparo Gilbuena, who was then and remains an inspiration to me.

All this time, I continued to be involved with the farmers and the Lumad (the collective name that the non-Moro/Muslim indigenous people of Mindanao give themselves). We had many biblical-theological reflections on the pressing issues of the day.

When I became a full-fledged nun in 1986, I was also invited to become a member of the Rural Missionaries of the Philippines. The "culprit": Sr. Crisanta Demafelis.

When the RMP's vision and mission were explained to me, I thought that it did not differ much from the mission of the congregation. As our founder, Missionaries of the Sacred Heart of Jesus Fr. Charles Van den Ouwelant (later bishop of Surigao, Philippines), said, we should have a "special emphasis on the service to the poor" and we need "adaptability to the times and the needs of the present and next generations."

His call to our community — "love our neighbor out there in the world with an effective love shown in friendliness, kindness, interest in their welfare, dedication" — is consistent with the RMP's slogan: Love that is real and active.

As a Missionary Sister of Mary, I have been from the prisons of Abra to the schools of Polillo Island, Cebu and Tacloban, to the wellness center and social services center of Butuan. In carrying out my tasks, the RMP has always been with me.

I worked with the nuns and priests of RMP-Eastern Visayas in a victorious farmers' campaign for land. I have also worked with religious and lay workers of the RMP-Northern Mindanao Sub-Region in helping victims of sexual abuse.

I have been with the RMP in rallies, negotiations and other united actions of the rural poor in pursuit of their interests and needs. I have talked with residents of cities to ask for support for the Lumad and the farmers, and accompanied them during community immersion experiences. Last year, someone took a video of me negotiating with the military to ask them to let the Lumad evacuees pass through a military checkpoint.

Policemen and soldiers have shouted at me when I accompanied the families of victims of armed clashes. I have also stood witness to the release of policemen and soldiers who became prisoners of war of the New People's Army (NPA — the armed wing of the Communist Party of the Philippines).

All these are parts of my effort to serve God and our fellow men and women.

So — what about these charges I face? The robbery-arson charge was filed by the military in relation to an NPA attack on a military detachment that led to the capture of some members of the armed forces. Ironically, I was later a witness to the release of those prisoners of war.

The perjury case was filed by the national security adviser after the RMP and other organizations filed for legal protection from the continuous red-tagging and other attacks. It is clear to me that we are being persecuted because we stand for what is right, for what is the truth. We stand for love and peace, and oppose violence and the inhumane treatment of farmers, indigenous peoples, and fisher folk.

Our lay workers ask me if I feel afraid. Of course, I feel afraid; I am just human. But if I let fear take over, all is lost. I am afraid but I know that I am with my fellow Missionary Sisters of Mary. I am with the RMP and other religious and lay workers. I am afraid. But I walk with the Lord in our mission. "The Lord is my shepherd; I shall not want" (Psalm 23). And as Bishop Van Den Ouwelant said, "This is a life of total dedication of self, from which we in turn will draw the strength to work for the salvation of others."

He also said — half-joking and half-serious — "Do not be afraid of being imprisoned. Being imprisoned means that you have been doing your mission."

This is why I have called on the RMP and other members of the clergy and religious men and women to carry on with our mission! Let us continue walking with the rural poor in their journey toward truth, peace and abundance. Let us continue to spread love that is real and active!

[Emma Teresita Cupin is a Missionary Sister of Mary in the Philippines. She is currently the coordinator for the Northern Mindanao Sub-Region of the Religious Missionaries of the Philippines.]