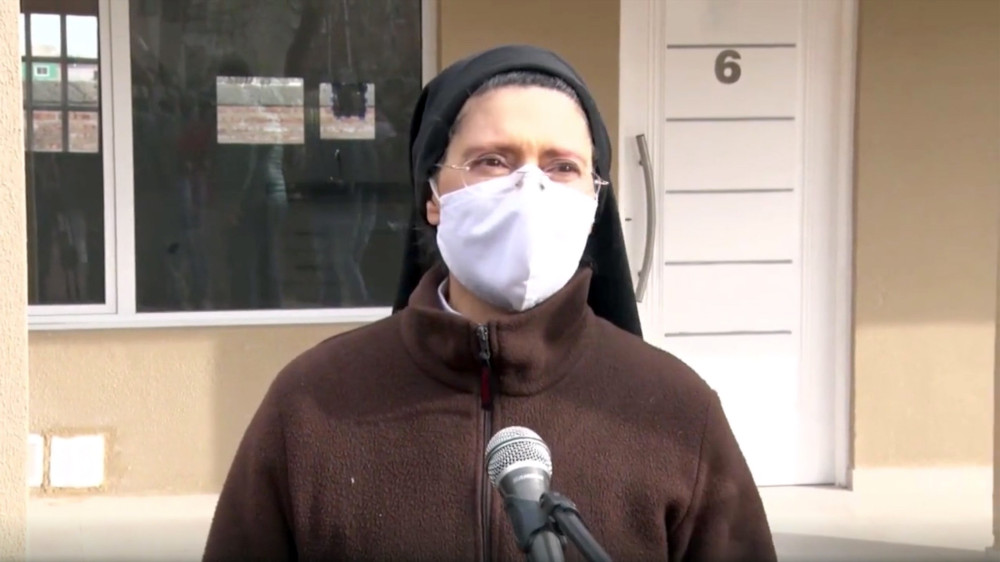 Sr. Mónica Astorga Cremona speaks at the opening of a new housing complex for trans women in Neuquén, Argentina, in August 2020. (RNS/Video screengrab)

Pope Francis sent his support to a cloistered nun in his native Argentina who opened a safe home for transgender women despite the opposition of her diocese and community.

"My dream was that trans people could have a decent home. Because we don't give them that opportunity. They don't have a right to anything," said Sr. Mónica Astorga Cremona of the Discalced Carmelite Nuns in Argentina, at the opening of the home on Aug. 10.

Astorga is the prioress of the only cloistered monastery in Neuquén, the most populous city in the Diocese of Patagonia in Argentina. The new complex is made up of 12 small rooms fashioned from two floors of about 430 square feet each, with a shared bathroom and kitchen. It offers a safe refuge for 12 transgender women between the ages of 40 and 70.

The home, called The Coast of Limay, has been described as the first permanent residence in the world dedicated to vulnerable transgender people. Residents don't have to pay rent and, if they follow the rules of the home, they can live there forever, Astorga said in interview with the Italian news outlet Linkiesta. (RNS was unable to determine what the rules of the home are.)

"I am so happy, so grateful to God and to Sister Monica who has been so kind to us," said Paola, a resident of the complex, speaking to local reporters at the inauguration. "We should erect a monument to this nun who was so attacked and yet with the strength of God continues to aid us!"

After numerous killings and other violence targeting transgender people in Argentina, the country was the first in the world to pass a Gender Law in 2014 that removed obstacles for those seeking to transition.

Since the end of 2019, the Neuquén province offers pensions for transgender people above 40 years old, in recognition of decades of inequality and rights violations. Argentina's stance on transgender rights has garnered praise from the international community and the World Health Organization.

Astorga, who has worked closely with poor and vulnerable people for decades, first came across the challenges faced by the transgender community in 2015, when a trans woman asked to make a donation to her church.

"She told me that her dream was to have a clean bed to die in, because that night when she went to the street she didn't know whether she would die or end up in a hospital bed where the sheets are not even changed," she recalled in the interview published Aug. 21.

From that moment, Astorga began to help a growing number of trans people from within the monastery, using an email or phone to pray and talk to those in need. She said in the interview that she had found the "faces and the names" she had prayed for God to show her. 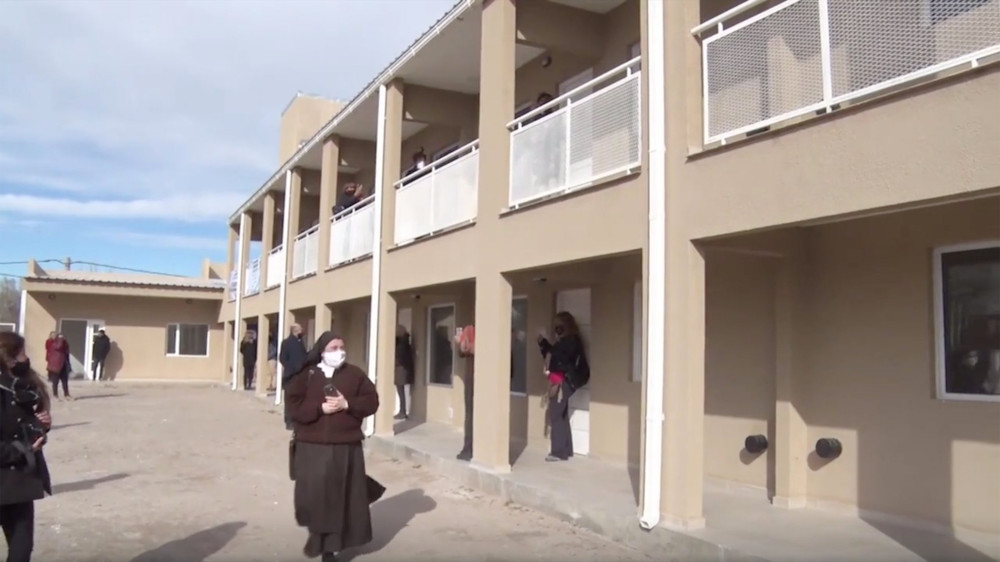 People tour a new housing complex for trans women after a ribbon cutting in Neuquén, Argentina, in August 2020. (RNS/Video screengrab)

Despite the progressive laws in the country, Astorga said she met resistance from her community and local diocese while attempting to create the safe home. She said she went door to door to persuade people about the need to welcome and cater to transgender people.

"In the local church there are very few who approve such an activity," she told the Italian paper.

"I've already been accused of everything, I don't think they have much more to say to me," added the nun, who has asked reporters on Facebook not to contact her for comments.

Pope Francis has been a supporter and friend of Astorga since before he was archbishop of Buenos Aires, and he personally visited the community in 2009. Today they have a continuing correspondence.

"Sometimes I ask him what to do when someone tells me something terrible, and he always says to me: Did Jesus have an easier or harder time? At the time of Jesus the lepers were rejected in the same way," she said.

Francis reportedly told Astorga that transgender people are "the lepers of today," and he urged the nun to pray and carry on her work knowing he is accompanying them.

Right before the inauguration of the complex, Pope Francis sent another note to the sister encouraging her not to be defeated by the hostility of those who oppose her work.

"God, who didn't attend seminary and didn't study theology, will reward you generously. I pray for you and your daughters," he wrote, according to the Argentine national news agency Telam.

This isn't the first time Pope Francis has made a gesture in support of the trans community. Last April, he sent the papal almoner, Cardinal Konrad Krajewski, to help a struggling transgender community in the outskirts of Rome by donating money and provisions.

Before that, Francis held a private audience at the Vatican with a transgender man, Diego Neria Lejarraga, and his girlfriend. The man said he was met with marginalization and resentment from his parish in Spain after his transition.

While the hospitality toward the LGBTQ+ community promoted by Pope Francis has ushered in significant change within the Catholic community, much more remains to be done, according to Astorga.

"There is still a road ahead in our beloved church," she said. "There is a need to interpret the gospel. There is a need for formation and information. But I think that step by step we are moving forward."