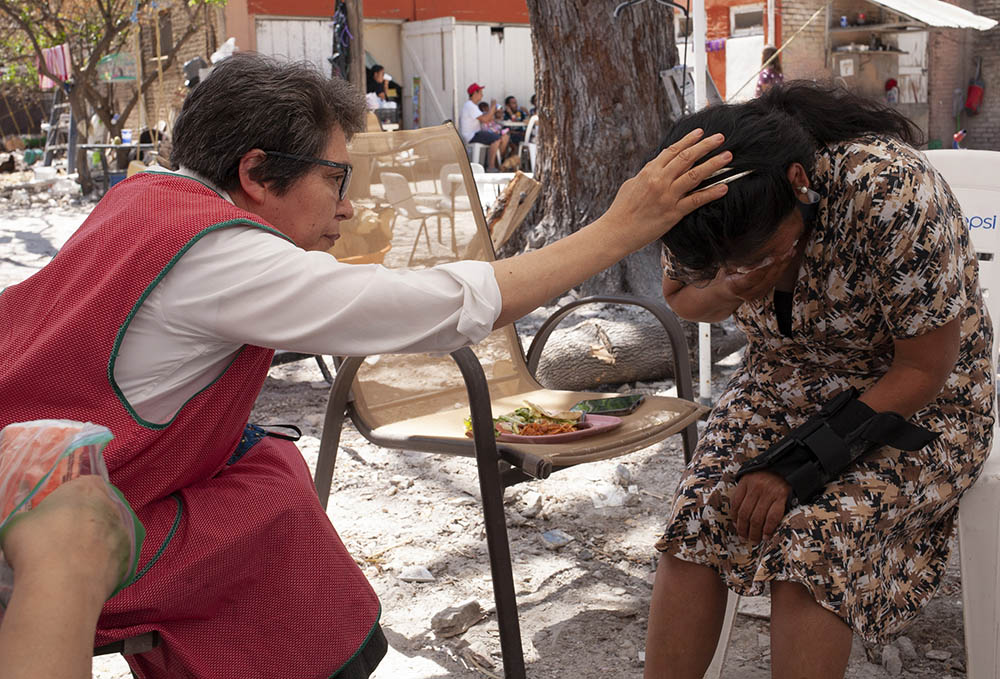 Sr. Mercedes Castillo prays over a Peruvian woman who only wanted to be known by the initials A.N. in the courtyard of the El Buen Samaritano shelter in Nuevo Laredo, Mexico, on March 27. The woman, who is seeking asylum in the U.S., broke down recalling how on break from her cleaning job outside the shelter, a man with a gun physically assaulted her but she was able to escape. Her then-14-year-old daughter was almost grabbed on the street but others intervened to stop the kidnapping. "I want to see Snow White and Cinderella, something beautiful," she said if she is allowed into the U.S. (Nuri Vallbona)

As COVID-19 raged around the globe keeping most people home in 2020, Sr. Mercedes Castillo, 59, left the safety of her Baltimore community and relocated to Texas. The Comboni Missionaries sister and her congregation had discussed establishing a ministry there for several years, but the pandemic made them hesitate. There are "people who are waiting for us," Castillo said.

Accompanied by her provincial, Sr. Olga Sanchez Caro, Castillo moved to San Antonio that summer. In November, they were joined by another Comboni sister who remained after Sanchez Caro returned to Baltimore two months later.

When Castillo arrived, many immigrants were stuck along the U.S. southern border under the Migrant Protection Protocols, or MPP, that forced asylum seekers to remain in Mexico until their cases could be heard.

At first, Castillo volunteered at the Interfaith Welcome Coalition's bus station ministry in San Antonio. When Sr. Denise LaRock, a regular visitor to Mexican immigration shelters, in June returned to serve as councillor for the Daughters of Charity of St. Vincent de Paul in St. Louis, Castillo took on some of her responsibilities. 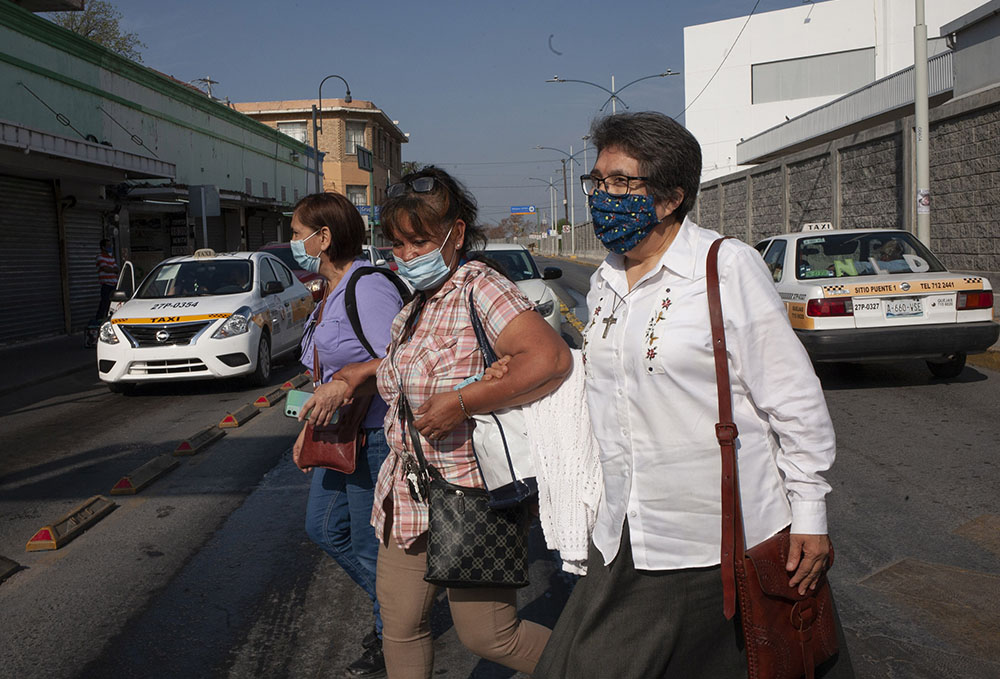 Despite the risks of catching COVID-19 or being kidnapped by cartel members, Castillo then began visiting the Nuevo Laredo, Mexico, shelters run by the Rev. Lorenzo Ortiz, and his sister, Micaela.

During a visit in March, GSR accompanied Castillo to two locations where she brought supplies, sang songs and popped popcorn for a children's birthday party. At times she sat with mothers who shared the traumas they experienced while waiting to cross. When they wept, Castillo held their hands and prayed.

She said her work is done in the name of San Antonio sisters who can't make the journey themselves. Organized as the Inter-Congregational Leadership Group of Women Religious in San Antonio or ILGSA, these sisters provide her ministry with clothes, supplies and moral support. Her focus, she said, is to accompany immigrants and connect with those who can help her understand the complexities of the immigration issues she encounters.

Castillo has extensive global migration experience. From 1991 to 1999, she worked with Jesuit immigration services to open a training and assistance center in Lukasa, Zambia. She described how survivors of the Rwandan genocide sought refuge there, as did Ugandans, Kenyans and Angolans. The next seven years she spent in Murcia, Spain, serving those coming from eastern Europe, Ecuador and Morocco.

In 2006, she got the call to return to the U.S. where she was told the needs of immigrants were great.

In spite of taking safety precautions and wearing a mask, Castillo said she eventually tested positive for COVID-19 in late April. But that didn't deter her. Still recuperating during this interview, she talked about plans for her mission and the "homework" she would soon tackle. Her responses have been translated from Spanish and edited for brevity and clarity.

GSR: You just returned from your visit to the shelter in Nuevo Laredo. What is the situation there?

Castillo: Sad and desperate because I had the hope that with Biden — he promised to welcome those with MPP — I thought that the shelters were going to be empty and it is the opposite, they are full. Right now, in the three shelters, there are a total of 240 people because every day they deport people [from the U.S. back to Mexico] under the rules that Trump left.

The violence there, as you know, is constant. For example, yesterday they seized a man and his son — again the cartels — but thank God, they released them because they [the father and son] said they had no family here. But every day it's like that. 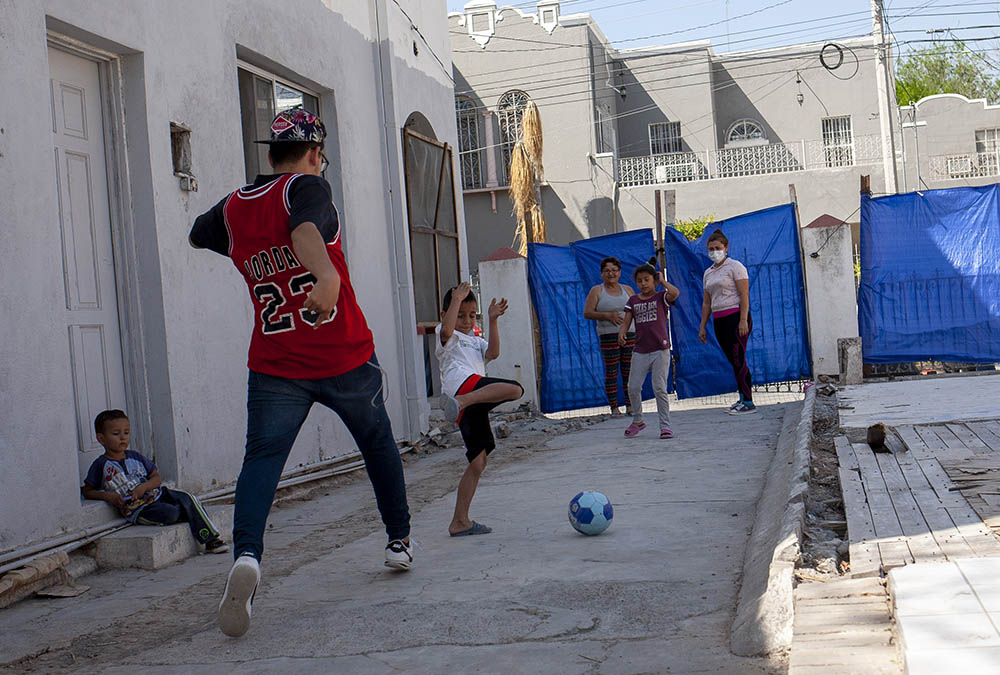 Locked gates keep children safe as they play soccer at the El Buen Samaritano shelter in Nuevo Laredo, Mexico, where immigrants are waiting their turn to seek asylum in the United States. Immigrants are often kidnapped and held for ransom while traveling to the U.S., so a big emphasis at this shelter is to keep them safe. (Nuri Vallbona)

How do you stay safe and not get kidnapped?

Working with Pastor Lorenzo, because they [the cartels] already know him. In the beginning, they entered the shelter and threatened him. But Pastor Lorenzo explained that he was not their competition, that he was there to help the people.

When I go with his sister to where immigrants are deported [back to Mexico], that gives me security. I am not afraid because they identify me as someone who works with the shelters.

What is your mission for this ministry?

When we got to San Antonio, Sister Denise was already doing this work (visiting Mexican shelters, greeting immigrants at the bus station and shuttling supplies to the border). The sisters here are organized as a group called ILGSA. They asked me if I could continue doing part of it because Sister Denise did much more. I told them that yes, with great joy because it was our goal, and that is one of the ministries we are doing. 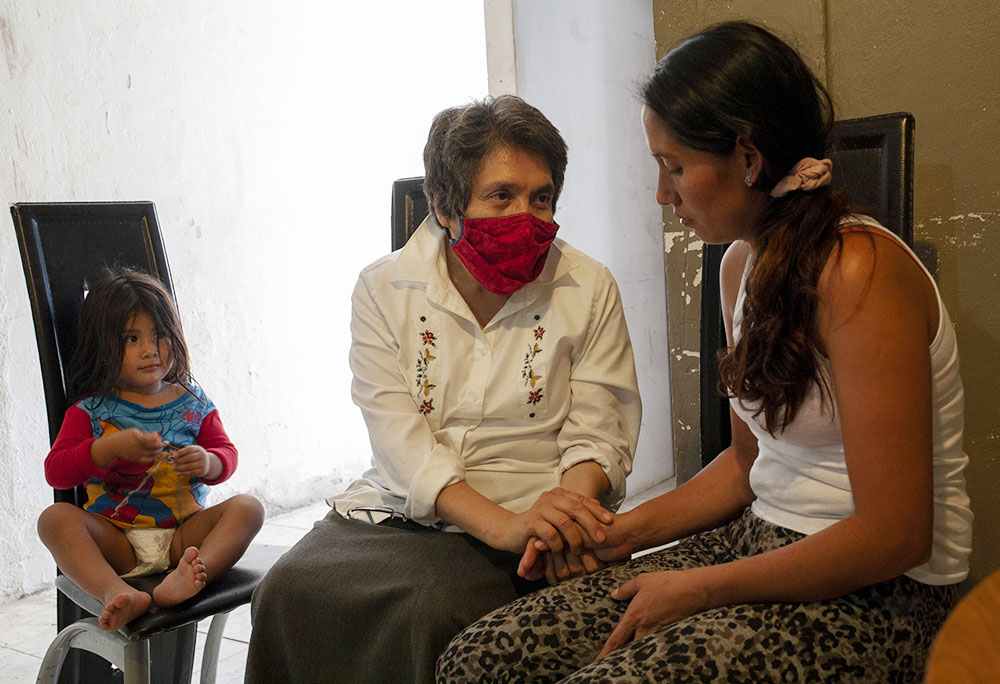 Sr. Mercedes Castillo, second from left, comforts Noelia Marlene Vásquez of Honduras while her daughter, Lindsey Gimena Rodas, 2, sits nearby at the El Buen Samaritano shelter in Nuevo Laredo, Mexico, on March 27. Vásquez had just learned that her daughter, who has a damaged lung, was back in a Honduran hospital. She had hopes to get asylum and a job in the U.S. and send back money for her daughter's medical treatment. (Nuri Vallbona)

But as Comboni missionaries, part of our charism is the formation of leaders in evangelization, so I am helping part time in the Oblate Theology School in the master of arts program for pastoral ministry in order to prepare Hispanics to serve the church.

It seems that you put a lot of emphasis on accompanying immigrants. Can you tell me about that?

Since I came to the United States, I have always seen immigrants arrive, but not in the conditions and numbers I've seen in recent years. I believe as a church we have to respond to this cry of humanity. I ask myself, what will happen to our humanity in the future with the scar of trauma that remains in their lives, especially children and young people?

That work is huge and can only be done by joining hands with more organizations. We need changes in structures, and with government leaders, because the causes of immigration are many, not just violence, poverty, but climate change that pushes people to immigrate.

What is your goal in the future? What do you want to do with this ministry?

The truth is that it is so big that sometimes you see the huge mountain and you don't see how to manage it. But I think that small projects are emerging, which I believe have to unite us as religious women to create small oases of security for these people because many of them will not be able to reach the United States and will remain in limbo at the border. 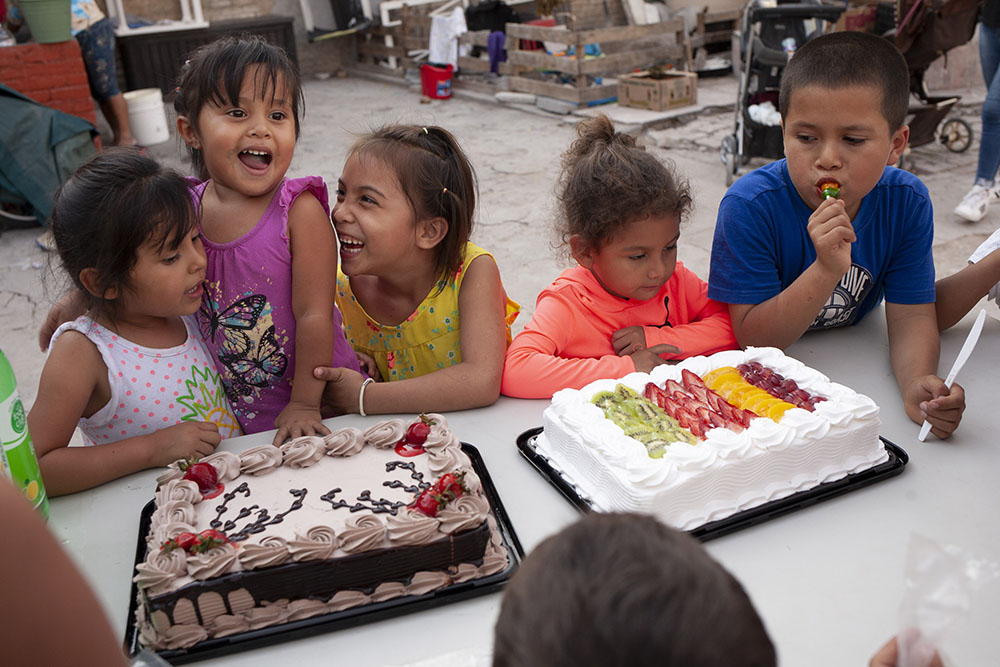 Birthday girl Ximena Lino Romero, 3, second from left, laughs with friends during a party for her and a friend at the El Buen Samaritano immigrant shelter in Nuevo Laredo, Mexico, on March 27. (Nuri Vallbona)

I think we have to start thinking about what we can do to create stable places for these families, especially mothers and children.

How do you plan to do all of this?

We are collaborating with groups and I think that as religious women we have to sit down to talk, and involve other organizations. For example, I participate monthly and weekly in the meetings of many associations that come together on the Texas border. We have to involve them, too.

We have to respond immediately to those coming with MPP. They have to look for legal help right now, find a safe place, work and they aren't familiar [with these things]. 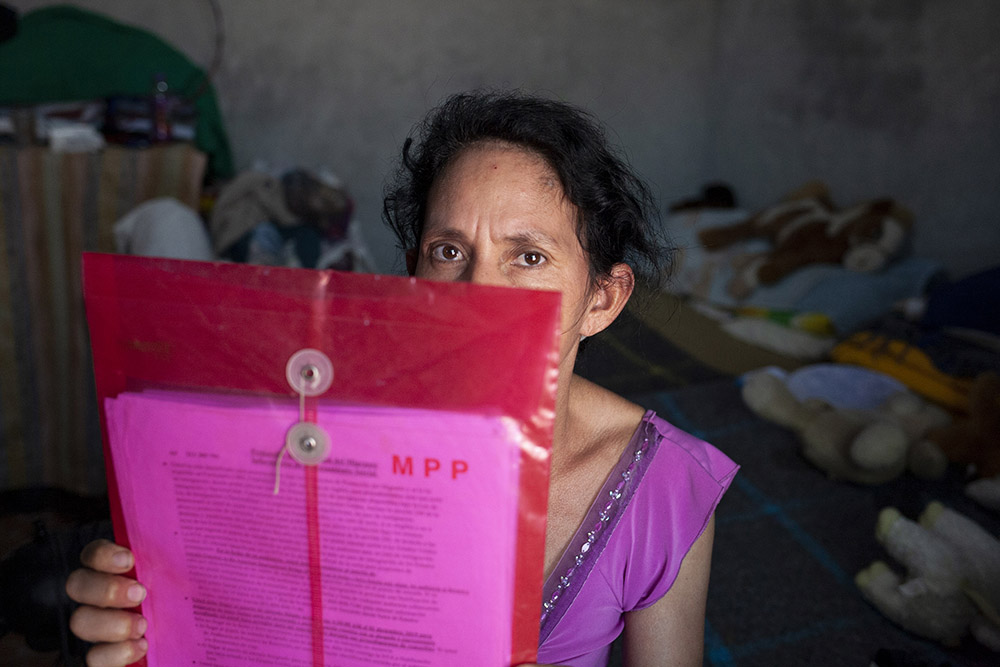 Maria Piñeda Serrano of Honduras shows the file that holds her Migrant Protection Protocols paperwork on March 27 at the El Buen Samaritano shelter in Nuevo Laredo, Mexico. Under the protocols, immigrants like Piñeda Serrano must wait their turn in Mexico before they are allowed to cross and plead asylum in the U.S. She has been in Mexico since August 2019. (Nuri Vallbona)

Above all, they need us to listen so they do not feel alone here. They imagine that the American dream exists and in my 15 years of working with immigrants, many times it turns into a nightmare for them.

What do you think is your biggest challenge as you try to achieve all of these goals?

I believe that the challenge has been COVID because many things could be done a little faster. But thank God, now there is the vaccine.

Even before when I went to the border, it was a challenge going alone, but I was strengthened by the presence of God. But now, after the vaccinations, it is nice to see that several volunteers come with me.

In terms of your faith, what has this ministry meant to you?

It has made me strengthen and grow in my faith because as a witness to the suffering of the people, I see how the hand of God gives us grace and the Holy Spirit accompanies these people. My hope also grows and does not let me lose trust in a God who walks close to the people. In my missionary vocation, he says that it is worth continuing to give one's life for the kingdom and it is worth continuing to say yes to God because he is the God of promises. 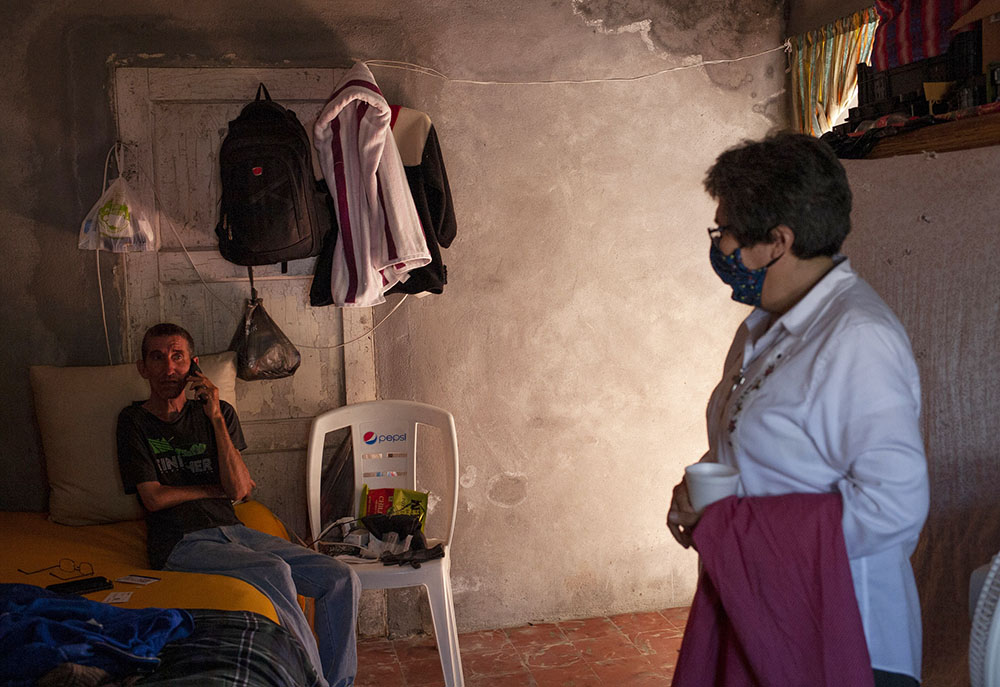 Sr. Mercedes Castillo, left, greets Osmani Pedro Perez, of Cuba, at the El Buen Samaritano shelter in Nuevo Laredo, Mexico on March 27. Perez said he fled Cuba for political reasons and arrived in Mexico last March. However, when it was his turn to cross the bridge, authorities closed it because of the pandemic. He has been in limbo ever since, but still holds out hope he can one day cross through legal means. (Nuri Vallbona)

So what I see is that for you it is important not only to accompany others but to accompany them in the way that God accompanies you.

Yes, because there is a great desire that is born in my heart and has been reinforced by the invitation that Pope Francis made since the beginning of his papacy to grow a culture of gathering together. It's only by gathering and going to the peripheries that you can live that experience — to feel accompanied by God and to accompany.