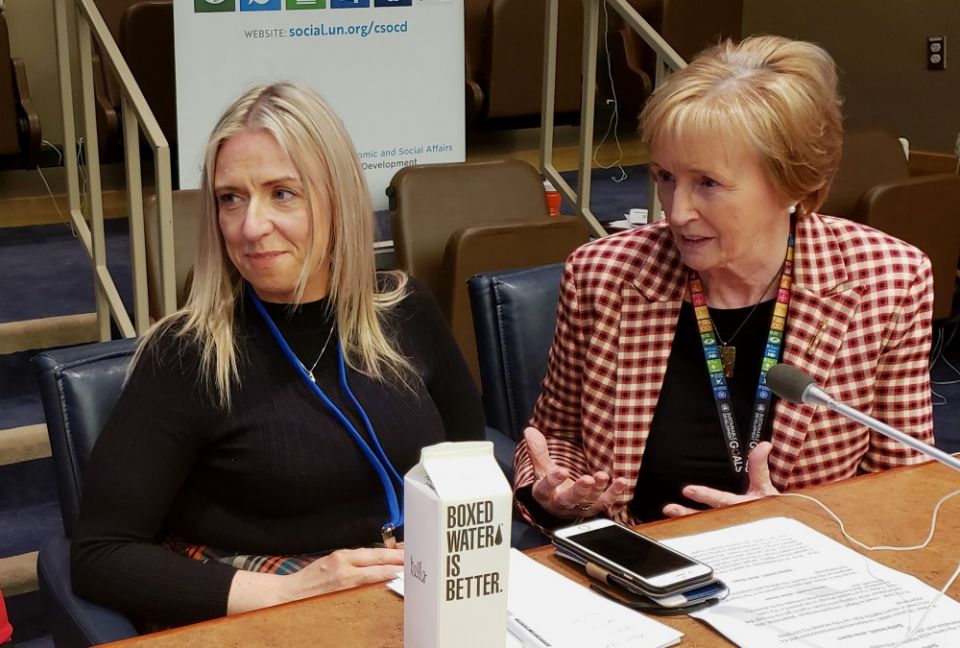 New York — With worry over the COVID-19 pandemic canceling or postponing today's St. Patrick's Day parades in Ireland and the large Irish American conclaves of New York City, Boston and Chicago, I have another way of celebrating the Irish: affirming their social activism and commitment.

I was aware of this long before St. Patrick's Day. In my four-plus years covering the work of Catholic sisters at the United Nations, I have been impressed with the notable purpose and passion the Irish sisters bring to their advocacy work.

It's not that sisters from other countries don't share those traits. Sisters from the Americas, Africa, Asia, Australia, Europe and Oceania are all as passionate, faithful and idealistic about social justice as the Irish. And all are equally dogged in the doing of it.

But I do sense a special tenacity with the Irish, something on full display during the recent 10 days of meetings of the U.N.'s Commission for Social Development, which focused on the issue of homelessness and affordable housing.

The Irish were often front and center during these meetings, no doubt because of the work of Daughter of Wisdom Sr. Jean Quinn, executive director of UNANIMA International, a U.N.-based coalition of Catholic congregations focused on concerns of women, children, migrants and the environment.

Quinn came to UNANIMA from the Sophia Housing Association in her native Ireland, and the work of Sophia and the overall response in Ireland to homelessness was a recurring thread throughout the meetings.

At a Feb. 11 session on the topic of family homelessness, Quinn was joined by representatives of Sophia and the Permanent Mission of Ireland to the U.N., as well as Mary McAleese, the former president of Ireland, who also spoke at the Feb. 10 opening session of the U.N. commission.

It was at the Feb. 10 gathering that McAleese memorably said, "I once described Ireland as a first-world country with a third-world memory. That memory and the visible evidence around us of a housing problem means we are not a Pollyanna people. There is a tangible determination that homelessness cannot, will not, mean unending hopelessness."

My ears perked up. McAleese wasn't just addressing the dire situation of affordable housing and homelessness in Ireland; she placed it in broader terms. She grounded it in the history of a country that had known colonial domination and had a cultural memory of that experience.

Of course, the focus at the meetings was on the present, not the past. Elizabeth Madden, who is Irish and last experienced homelessness 16 years ago, knows Quinn through Sophia. She spoke during the United Nations meetings about the particularities of experiencing homelessness in a contemporary context.

She cited her experience of "people waiting to be housed, people in overcrowded homes or staying with friends. I think of people who are living in rehab centers, psychiatric homes," as well as asylum-seekers receiving government assistance.

That's the now, and it's good that Madden and others were part of the discussion at the U.N. (Madden repeated something Quinn often said during the meetings: Those who have experienced homelessness do not want people discussing the topic without their participation. As Quinn put it, "Do not talk about us without us.'') 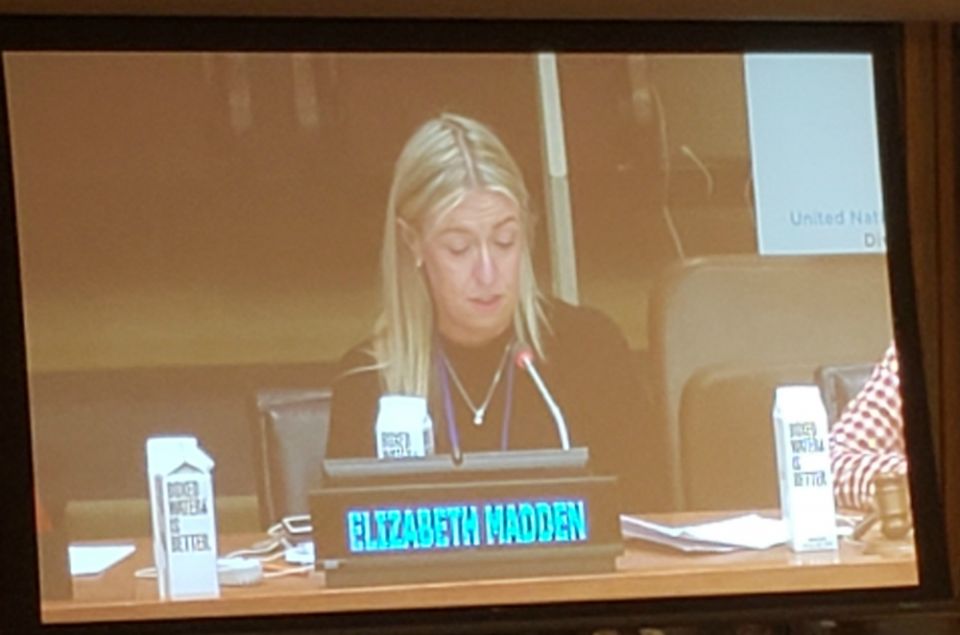 Elizabeth Madden speaks of her experiences with homelessness during United Nations meetings on homelessness and affordable housing in February. (GSR photo / Chris Herlinger)

Still, McAleese's remarks got me wondering if there was something to the idea that the Irish bring a particular passion to this work because of Ireland's history — a history marked by British colonialism, famine and emigration.

The answer, according to the sisters I know, is: Well, yes and no.

The government of Ireland still needs to do more on housing and homelessness, Quinn told me at the conclusion of the February meetings, noting then that four homeless people had died on the streets of Irish cities during the U.N. meetings. She felt religious congregations were among those "leading the way in housing" in Ireland and she said that would continue as public pressure mounted for the government to do more about a housing crisis that is remaking Irish politics and has prompted street demonstrations in Dublin and elsewhere.

Historical memory may be part of that dynamic, Quinn said. But she also cautioned that sometimes public debate about housing in Ireland takes the form of nationalism, in which an "Irish first" dynamic can push aside the needs of newcomers to Ireland who also need affordable housing. Saying she doesn't want the Irish "to forget where we came from" — their history — Quinn said the question for all in Ireland when it comes to housing is, "Where did we come from, and where do we go from here?"

Sr. Winifred Doherty, an Irish sister who is the U.N. representative of the Congregation of Our Lady of Charity of the Good Shepherd and among the most passionate defenders of women and girls at United Nations meetings, knows that experience firsthand. 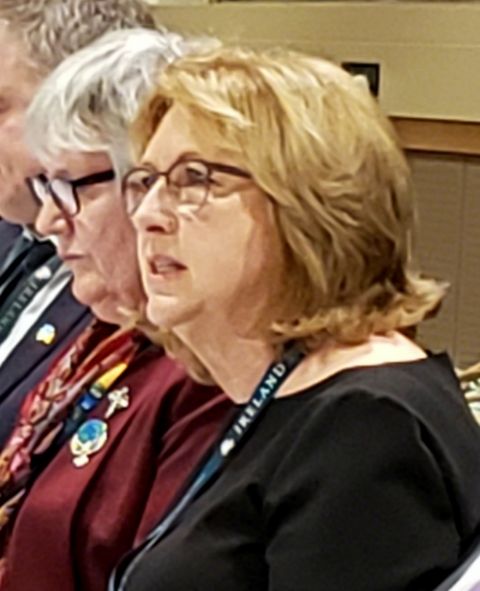 Mary McAleese, former president of Ireland, speaks at a Feb. 11 panel discussion on family homelessness at the United Nations sponsored by UNANIMA International. To her right is Sr. Winifred Doherty, an Irish sister who is the U.N. representative of the Congregation of Our Lady of Charity of the Good Shepherd. (GSR photo / Chris Herlinger)

In an interview, she related her experiences of living and working in Ethiopia starting in 1991. Conditions included no running water or indoor toilets. Though Ireland was a prosperous country by then, her experience in Ethiopia "brought back to me my early days as a child in Ireland" in the 1950s and early 1960s, she said.

The memory of poverty and of family members emigrating "still exists for people my age," Doherty said.

"I'd say it's a motivating factor," she said of Irish consciousness about social issues, noting that the Irish are generous in donations during international disasters. And at the U.N. level, she noted that the Permanent Mission of Ireland to the U.N. is consistently helpful with sisters' advocacy efforts, which is not always the case with U.N. missions.

However, Doherty said she believes her congregational identity and the Good Shepherd charism is probably more important for her passion for social justice than being Irish.

Loreto Sr. Cecilia O'Dwyer, the U.N. representative for the Institute of the Blessed Virgin Mary, agrees with much of Doherty's assessment.

No doubt, she told me, the experiences of rural poverty and subsistence farming still have echoes in Ireland today. It was not until the 1970s, 50 years after Ireland became an independent country from Great Britain, that the government could finally offer free secondary education, O'Dwyer said. Struggle and its part in Irish history may be an element of Irish character, she added, and so "the idea of helping others has always been very strong with us."

"There is definitely something," she said, "We have this memory, and it can bring out the best in us. I suppose it's generosity, us asking, 'How can we help?' "

But at the same time, O'Dwyer said, Ireland — after an economic boom in the 1990s and early 2000s earned the country the nickname "the Celtic Tiger" — is now at a moment "where we're going to experience real economic inequalities other parts of the world have experienced."

"We've had an improvement with the macro-economy, yes," she said. "But you now have this massive inequality, and it's growing." 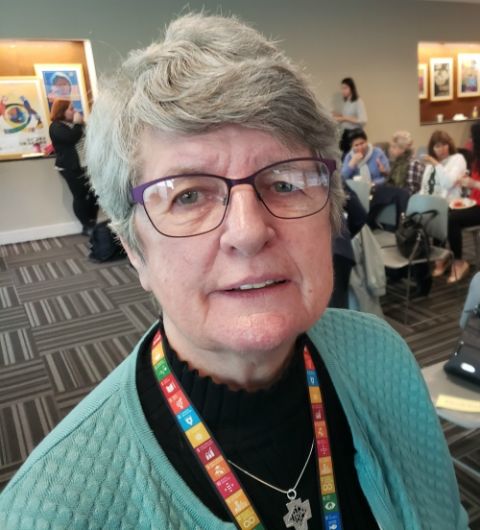 Irish Sr. Ann Marie Quinn, who serves as the executive director of the International Presentation Association and attended the commission meetings, told me in an email that she believes "there is certainly a remarkable altruism to be found within Irish communities. It is possible that there is a connection between it and the pervasive influence of Catholicism in Ireland, in particular from the mid-19th to mid-20th centuries."

She added, "It is true that the Irish as a people have lived through colonization resulting in oppression, poverty, famine and emigration." But, she cautioned, "legacies do not of themselves engender commitment to social action or advocacy for justice."

Quinn thinks that when it comes to the work of sisters, such commitment is probably due to three factors:

In short, it's a mixture of things, in no small part because of "our growing awareness of globalization in general and of the systemic nature of injustice," Quinn told me.

All true. Certainly, the Irish aren't alone in their awareness of injustice. And they're not the only people who have become "a first-world country with a third-world memory." But on the special day celebrating the Irish in our midst, I applaud them, and the Irish sisters in particular, for keeping that awareness alive.

Ministry | Another way of celebrating the Irish: affirming their social activism

Q & A with Sr. Vivian Ivantic, witness to changes in the church in her 83 years as a sister