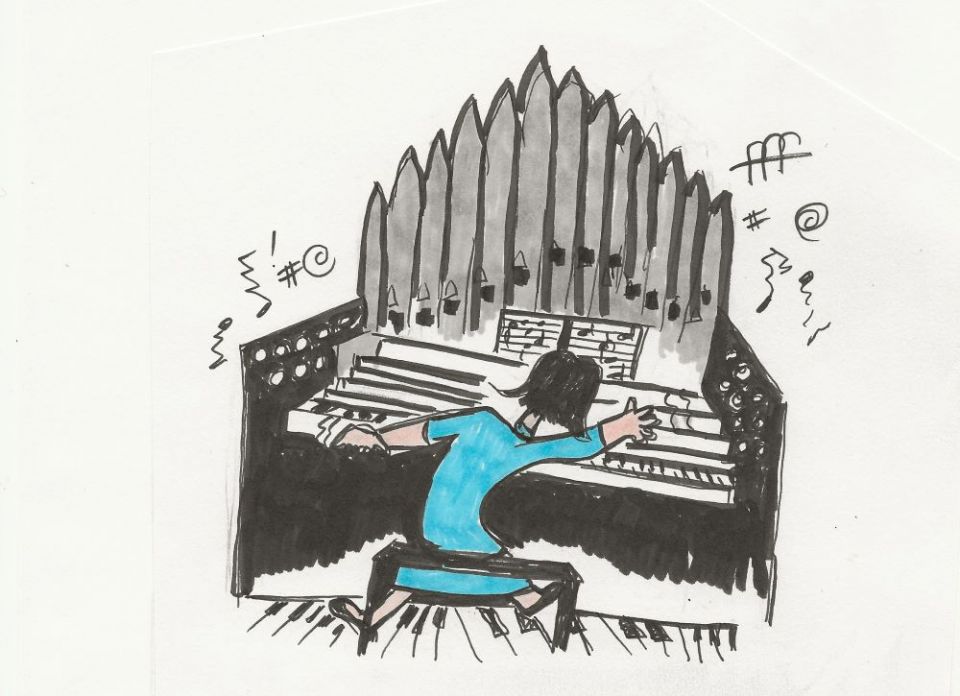 Religious sisters of a certain age will remember when the superior general, during her official visitation would ask, "Can you type?" "Can you sing?" "Can you teach high school chemistry?" "Can you play the organ?"

The sister would answer apologetically, "No, Mother."

The superior would then say, "Well, my dear, you can learn!"

That was my experience and introduction to becoming a church organist.

When I returned to Syracuse, New York, I began taking organ lessons from Will Headlee, an accomplished organist and professor at Syracuse University. I can't not mention his name because he was a phenomenal teacher and a perfect Southern gentleman. Except for one incident.

He had instructed me to play a particular piece that required me to stretch and reach the highest manual (keyboard) with my right arm, and play the lowest manual with my left hand. There were four manuals.

I hope you can imagine how that felt to a person of my stature. I'm 4 feet 11 inches tall. Stretching my arms at those angles and trying to play the foot pedals was very unnerving and next to impossible. After the first chord, I lost my balance and fell forward, crashing onto the entire four manuals and pedal board.

The sound created was ghastly and should have sent professor Headlee shrieking out of the auditorium.

Instead, he emitted a burst of uproarious laughter. I was more than embarrassed, and I silently prayed that my lesson would soon be over.

If I remember correctly, I did play the particular composition again. I performed it before a group of benevolent senior sisters who politely clapped and uttered kudos.

But to improve as a church musician, I was encouraged to enter a training program.  I was at a definite disadvantage to qualify for the master's degree since I did not have a bachelor's degree in music.

A requirement for acceptance into the master's program was to perform musical pieces: one at the organ, one at the piano and one in song.

This experience was new to me — and very stressful. I had practiced for hours on the organ before traveling to this internationally known school. I chose Johann Sebastian Bach's "Prelude and Fugue in D minor."  Because of its drama and terrifying images of "The Phantom of the Opera," I was sure it would impress those who heard my playing.

When I had finished checking the registrations and the placement of my feet on the pedals, I began playing. I felt fairly comfortable as I headed toward the middle of the performance.

Suddenly one of the professors on the jury stood up and announced that he did not want to hear the rest of my performance because he had to be home for dinner.

I was astounded. How arrogant! How rude! How thoughtless! How humiliating!

Despite that stressful introduction I chose to major in organ. It seemed to be the most difficult of instrumental choices, but I felt confident to make the attempt to be an organist, especially because of training with professor Headlee.

I met many interesting students, especially the organists. I felt they were certainly more qualified than I was. It's amazing how intimidation can either paralyze you or push you into realms never before attempted.

I remember an ambitious organ student who spent endless hours practicing. The days and nights during the summer were hot and humid. This student would practice late into the night, using an old fan to keep him cool. After many hours of continuous practice, air emitted by the fan had swollen his eyes shut! I felt only sympathy at first. But as the years went by, my feelings turned to empathy as I recognized my own ambitions as an organist.

Part of the requirements for a master's degree in music with a concentration in liturgy and church music was to create a prayer service that demonstrated the candidate's musical accomplishment and liturgical prowess.

Kenneth, another fellow organist, asked me to turn his music's pages when he played his prayer service. I felt honored, but a little nervous, about turning the pages at the right times.

Ken's service required that the entire church be darkened for a certain length of time. All lights were off except the organ's lamp. He started playing his first organ piece. Suddenly, little black flies appeared, attracted by the lamp light. They landed on the music pages. The little flies looked like the black musical notes. Ken kept hissing, "Get them off! Get them off!"

I hurriedly brushed the flies off the pages, but there were some smears. This frustrated Ken even more. Now he really couldn't see!

My temperament as a person, organist and pianist does not match that of operatic divas. One such diva was my voice teacher. I knew I was a decent alto and could sing in choirs.  Unfortunately, this teacher decided that I was a lyric soprano and presented me with her musical choices.

At my final lesson, she wanted me to lie on the teacher's desk, support myself on one elbow and sing a lyric soprano's song. I just could not do it. I would not do it. It was so contrary to my personality.

Today I am happy to rest in the satisfaction that I am faithful only to what gifts God has given me. I do miss the pipe organ, but do not play it often. Many churches are equipped with electronic keyboards, and it is one of these that I now play. A gift for children in Vietnam