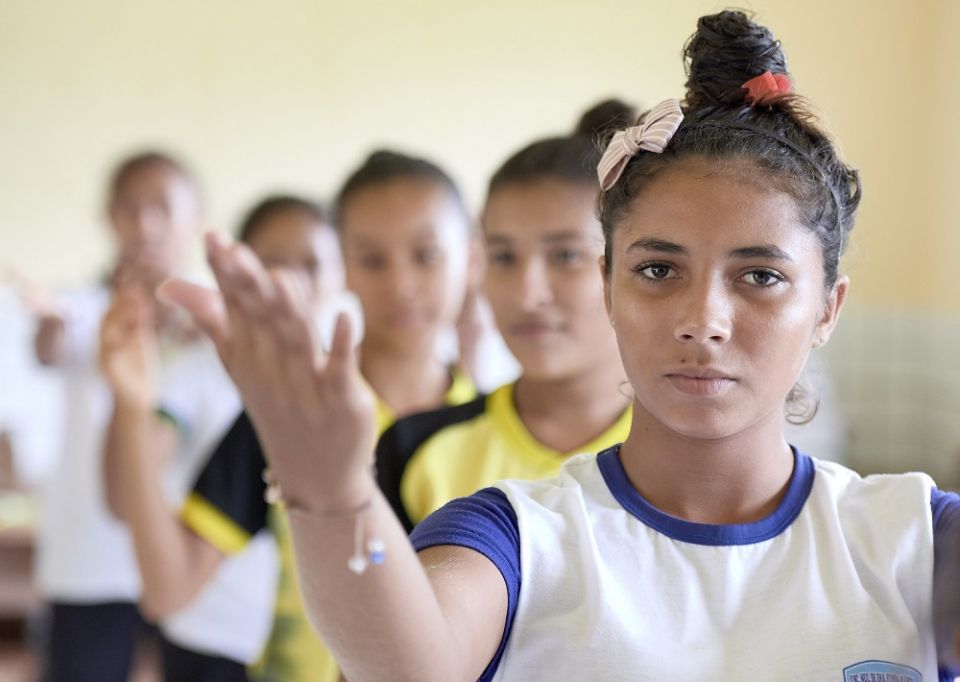 Young women practice a school play April 10, 2019, that recalls their troubled history in the Escola São João in Quilombo Tiningu, near Santarém, Brazil. Elsewhere, in the Brazilian state of Pará, a Franciscan nun is using Afro Brazilian traditions, including dance, to increase the self-esteem of teen girls. (CNS/Paul Jeffrey)

Sao Paulo — In vast regions of the Amazonian state of Pará, the presence of Black people has been historically invisible, even though it's an area that received Black migrants from the northeast.

Such a social denial of the Afro Brazilian heritage can be especially harsh on the self-esteem of Black teenagers. For decades, Franciscan Sr. Telma Barbosa has been fighting against it.

Pará has many quilombos, communities founded by African slaves who fled captivity. Barbosa began to work with groups of teenagers in Pará in 1990.

"I realized that depression, self-mutilation, and suicide became endemic among the poor youth in the city of Altamira, particularly among girls," she told Catholic News Service.

Barbosa has been a Black activist since her formative years, at the beginning of the 1980s. A dancer and a therapist, over the decades, she developed her own methodology to deal with the psychological and social problems experienced by the young participants of her pastoral activities.

"It's all about the body. I use the Afro Brazilian dance tradition" to help young people relax "and to accept themselves as they are," she said.

Invited to work with school teenagers in Altamira, Barbosa established a schedule of weekly meetings in which they collectively discuss their problems, talk about spirituality, and engage in different traditions of the Afro Brazilian culture, like tambor de crioula (creole drum, in Portuguese), a circle dance in honor of St. Benedict the Moor; capoeira, a mixed form of dance and martial art; samba de roda, in which the group plays and dances samba; and Afro fashion shows.

"There are white and indigenous teenagers in the group, but the focus is to cherish our Black origins," she said.

After a few meetings, some girls normally open their hearts to the nun.

"The other day, a girl showed me a scar in her wrist and told me she had done that with a screwdriver. 'Don't tell my mother, Sister,' she asked me," Barbosa said.

She said many girls have been raped by their fathers or stepfathers and were unable to denounce them, developing mental health issues. The lack of positive support at home and in school is also a frequent reason for depressive behavior, she added. An almost omnipresent issue is the difficulty many girls have accepting themselves as they are.

That was the case of 16-year-old Maysa Ribeiro de Oliveira.

"When Sister Barbosa invited me to join the group, I used to straighten my hair due to the prejudice I suffered," she told CNS.

De Oliveira was only 11 at that time and began to fight severe depression.

"I was taking six different medicines," she said.

In Barbosa's group, de Oliveira started to take part in fashion shows and in tambor de crioula dance. Although she does not identify as Black, de Oliveira today is very interested in Afro Brazilian culture. She soon understood that her curly hair was beautiful the way it was, she said.

"I have always been Catholic, but I feel more connected to my spirituality now," she added. It's been a while since she stopped taking her pills, and she's feeling fine.

Barbosa "has pushed us to assume our Black identities since the 1980s. She has greatly impacted Altamira with her work, although there's some resistance to the Afro Brazilian culture in the region," Bishop João Muniz Alves of Xingu-Altamira, a longtime friend of the nun, told CNS.

Alves said Barbosa's activities in the region started shortly after a wave of suicides of teenagers, most of them Black, in Altamira.

"The state and city governments should give more support to the work of Black activists," he said.

Barbosa has been continually pressing the local politicians to help Black activists to organize and operate. She has a similar effort inside the church, hoping for a Black pastoral commission in each parish.

"We want to make the Afro Brazilian culture and tradition visible in Altamira," she said. 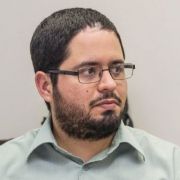 Eduardo Campos Lima holds a degree in journalism and a doctorate in literature from the University of São Paulo, Brazil. Between 2016 and 2017, he was a Fulbright visiting research student at Columbia University. His work appears in Reuters and the Brazilian newspaper Folha de S. Paulo.

Sharing my experience of 'God's smile'