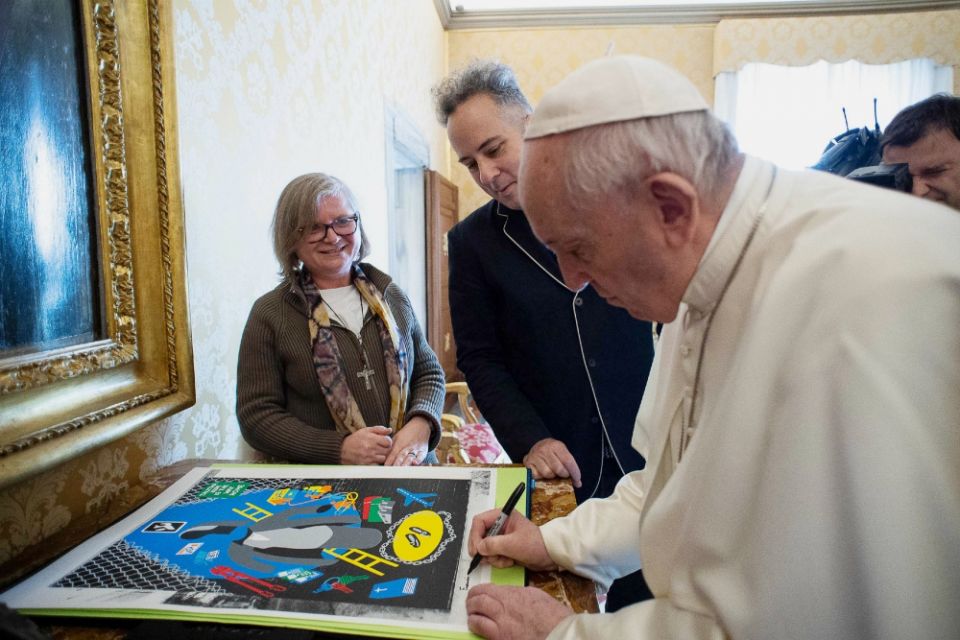 Street artists, prominent anime illustrators, and other renowned cartoonists and artists are paying tribute to women religious in anti-trafficking ministries worldwide, thanks to a new online fundraising effort.

Encouraging their online communities to learn about and support sisters against trafficking, artists are steering their patrons to Talitha Kum using Patreon, a platform where members can donate directly to musicians and artists they wish to support on a recurring basis.

Artists who are part of this effort donate or volunteer their art to highlight the work of Talitha Kum, an international network of networks that unites sisters in 92 countries who are devoted to the fight against trafficking.

This fundraising initiative is called Super Nuns. With the Galileo Foundation as its sponsor, the program intends to raise awareness and funds to help sisters reintegrate survivors of trafficking back into society, with all proceeds going to Talitha Kum. (Depending on how much family support the individuals have, properly reintegrating each survivor can cost anywhere from $2,000 to $10,000, as the effort includes job training in addition to meeting their basic needs.)

"We wanted to take the whole awareness of Talitha Kum to the next level, and I realized that had to go beyond believers, people of faith; it had to go the general public," said John McCaffrey, founder and president of the Galileo Foundation. The foundation promotes Christian and Catholic special projects, particularly the work of the pontifical academies of sciences and social sciences.

"We had to take it to a new level and reach out to people who knew nothing about nuns or trafficking" after the 2019 Nuns Healing Hearts photo exhibition, he said. McCaffrey developed a partnership with Edelman, a global communications firm that offered their work pro bono and came up with the Patreon idea.

When she learned of the Super Nuns idea, Comboni Missionary Sr. Gabriella Bottani, Talitha Kum's international coordinator, said she was unsure about framing the sisters as the heroes.

"The real super-people are the survivors who are able to renew their lives," she said.

"But slowly, I realized the powerful message and what I loved from the beginning was the coming-together of such different worlds — the [worlds] of the street artist, cartoon artists, and religious sisters working in anti-trafficking," she said.

"I was impressed and amazed by the use of different languages to reach out to groups of people that usually we are not able to reach."

Pope Francis launched the Super Nuns project Feb. 8, the feast day of St. Josephine Bakhita, the patron saint of trafficking victims, and the final day of Talitha Kum's yearlong 10th-anniversary celebration. The Edelman team, Bottani, and McCaffrey joined the pope at the Vatican for the launch, with the Galileo Foundation making a donation on the pope's behalf.

"The pope was very intrigued by the whole idea," McCaffrey said, adding that when the first Super Nuns artist, Stephen Powers (also known as ESPO), presented the pope with a print of his mural, the pope spent almost a minute "engrossed" in the image. 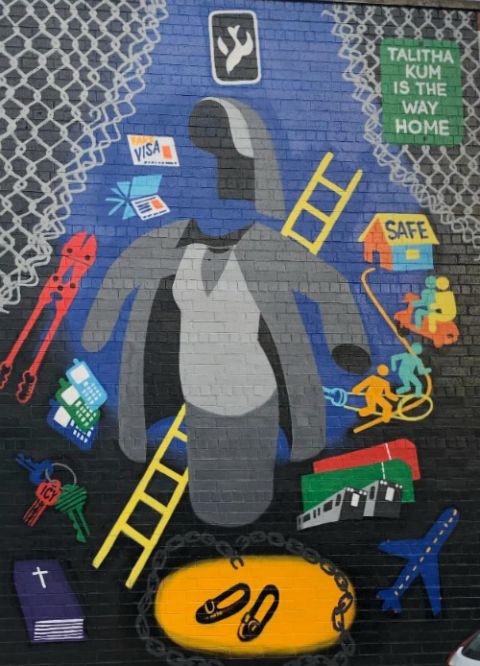 A mural by street artist Stephen Powers, also known as ESPO, is the first piece of art for the Super Nuns effort. (Provided photo)

"He's very open-minded to deploying technology and the latest innovation in the service of the Gospel," McCaffrey said. "He's been so terrifically supportive of the nuns and Talitha Kum and this network, and I think he basically feels that anything that might work to raise awareness of the plight of trafficking and victims, or survivors, is worth doing."

Often, depicting the work of sisters in this ministry is a challenge because of the delicate nature of their work: For their safety, it's best not to show their faces or reveal their identities. For this reason, portraying Talitha Kum sisters with pop art "is a great way to get around that and lift the awareness to a whole new level," McCaffrey said.

Bottani remained active in the partnership with Edelman and Galileo largely to "ensure that the work would not become a caricature, [that it would instead] really give life to the work of religious sisters and the commitment we have in the field of anti-trafficking."

"It touched me deeply when I saw the first art of ESPO, and the title is 'Talitha Kum Is the Way Home.' I would never express these words, and I was very touched by them. I'm sure that more artists will give us powerful inputs and a different way of looking at our work."

McCaffrey said they hope to include as many artists as possible, with "an organic momentum of its own to take off."

"That's exciting, the great power of the internet, that it grabs the imagination of people and can really run and run."

Since the launch, the Super Nuns page on Patreon has received steady support, he said. "We just need to take the work of these nuns to a global audience."

Breaking the silence of human trafficking: Catholic sisters in Zambia speak out

We walked against trafficking