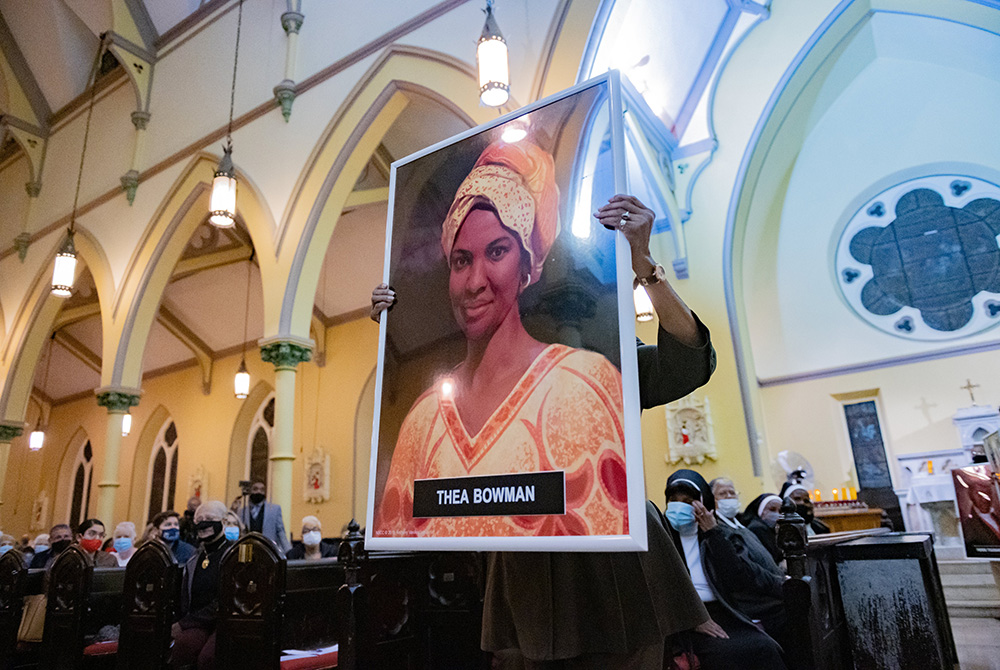 Theresa Wilson Favors, former director of the Office of Black Catholic Ministries for the Archdiocese of Baltimore, carries a portrait of Sr. Thea Bowman, a Franciscan Sister of Perpetual Adoration from Canton, Mississippi, during the opening procession of an All Saints' Day Mass at St. Ann Catholic Church Nov. 1 in Baltimore. (CNS/Catholic Review/Kevin J. Parks)

When Sr. Rita Michelle Proctor was a young child, she was taught by the Oblate Sisters of Providence from grades three to 10. The sisters' hospitality and trust in Divine Providence inspired her to become a religious sister in their Baltimore-based order.

After 53 years of love and service for the Lord in the Oblate community, the current superior general of her religious community was honored to participate at St. Ann Church in Baltimore in a Nov. 1 procession of six candidates for canonization. She held a portrait of the community's foundress — and one of those sainthood candidates: Mother Mary Lange, who has the title "Servant of God."

Five other members of the African American Catholic community processed to the altar holding portraits of the other prominent Black Catholics they hope will be canonized: Sr. Thea Bowman, the first African American member of the Franciscan Sisters of Perpetual Adoration, and Julia Greeley, known as the city of Denver's "Angel of Charity" — both have the title "Servant of God" — as well as Mother Henriette Delille, founder of the Sisters of the Holy Family, Father Augustus Tolton and Pierre Toussaint. The latter three have the title "Venerable." The title "Servant of God" is given by the church to a sainthood candidate when his or her cause is officially opened. 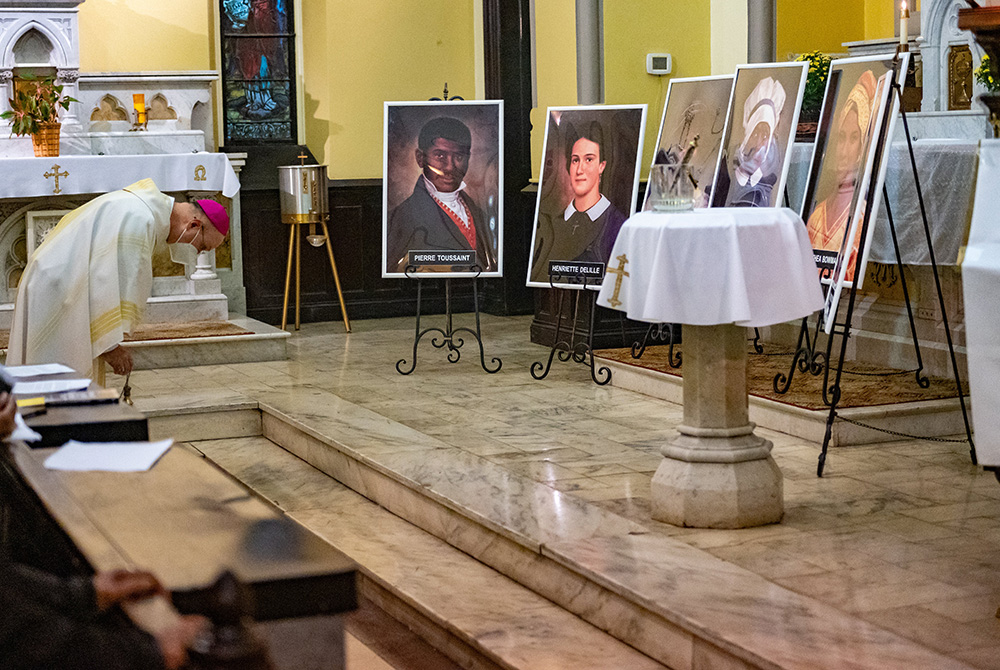 Following the procession, Auxiliary Bishop Bruce Lewandowski of Baltimore, the archdiocese's urban vicar, celebrated a Mass for the feast of All Saints. Nearly 200 people were present. The Mass was organized by a national campaign made up of members of three Baltimore parishes, St. Ann, St. Francis Xavier and St. Wenceslaus, as well as longtime members of St. Ann's social justice committee.

The purpose was to create awareness and educate the American people about the stories of these six candidates for sainthood.

Members of the campaign are collecting signatures in a letter to Pope Francis asking him to expedite their canonization.

"While there are no U.S. African American saints, there are 11 white Americans who have been canonized," the letter said. "We know there is a process, but it is not working for Black American Catholics and supporters. The process is reaping unfair, uneven results, especially when you realize that the six Black saints have been waiting 714 years totally if you add up the times since each died." 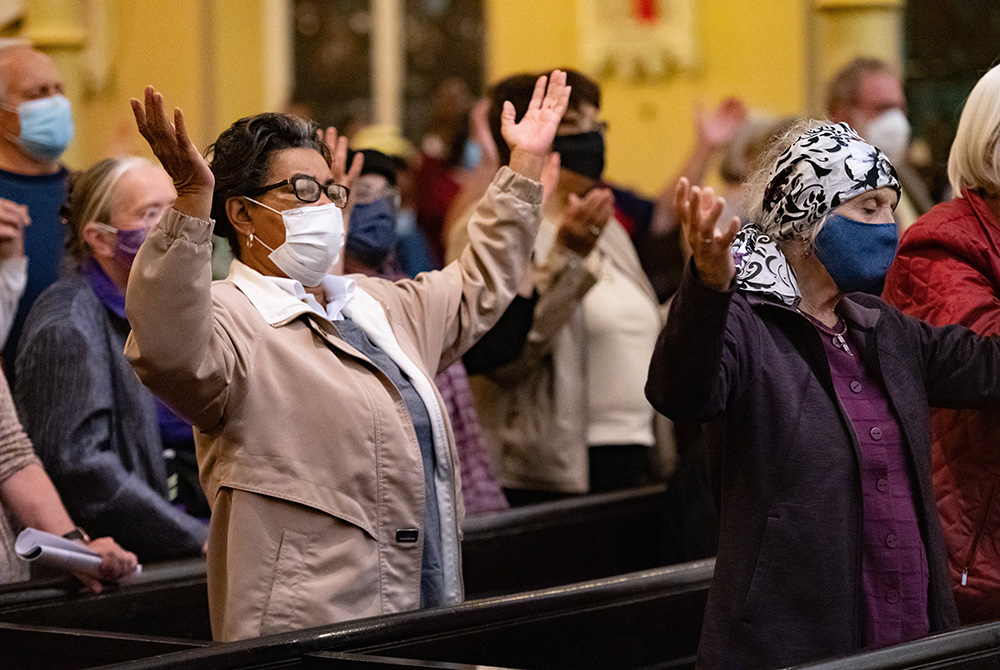 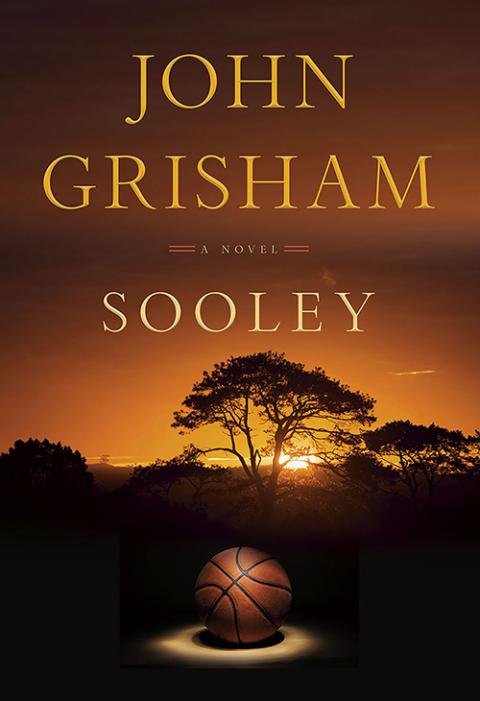 In April, Grisham — who wrote The Firm and The Pelican Brief, along with dozens of other bestsellers — published his most recent novel, Sooley, the fictional story of a teenage South Sudanese basketball player and his family's experiences living in South Sudan.

Mumaw, who is from Monroe, Michigan, spent 16 years ministering in Africa, including in Uganda, South Africa and briefly in South Sudan, and then spent six of her 18 years in congregational leadership serving as provincial of the IHM Overseas Missions visiting sisters in Latin America and several African countries.

Currently, Mumaw is the founder, president and chief administrative officer of the U.S. partner to Solidarity with South Sudan, Friends in Solidarity, which is hosting the event.

The webinar is free and open to the public. Those interested in registering can click here. The webinar capacity is limited, but will also be livestreamed on the Friends in Solidarity Facebook page.

On Tuesday, Nov. 9, the Franciscan Sisters of Perpetual Adoration Ecospirituality In Action Team will present "Laudato Si' and FSPA," an online presentation that is free and open to the public.

The hour-long Zoom discussion — from noon to 1 p.m. Central Standard Time — will expand on the FSPA's commitment to and ongoing efforts related to the Laudato Si' Action Platform, as well as the congregation's plans to develop future programs and projects that intend to increase action that addresses the ecological crisis.

"Our call is to view our actions through a Laudato Si' lens and step up efforts to care for creation and promote an environmentally sustainable lifestyle."

The ninth episode of "Exploring Intersections: Catholic Sisters on Racism, Migration and Climate," will focus on restorative justice, and airs Wednesday, Nov. 10, at 3 p.m. Central.

Exploring Intersections is a collaborative project of Region 10 of the Leadership Conference of Women Religious, which includes congregations in Iowa, eastern Missouri and Nebraska, and a few additional congregations from Wisconsin.

Charish Badzinski will host the conversation on restorative justice, joined by a panel of experts.

"Victims of crime often find forgiveness too raw to reach; the sense of injustice outweighing the act of turning one's cheek," said the press release ahead of Wednesday's installment. "For the perpetrator, the sense of injustice is equally strong; living in a world beyond one's control, where societal standards hold no applicable meaning. Restorative justice seeks to balance the judicial scales with an organized approach and open dialogue between the victim and the criminal in achieving resolution between the two and creating harmony within the community."

Registration is free and open to the public, and all recordings of this series can be found on YouTube and podcast apps.