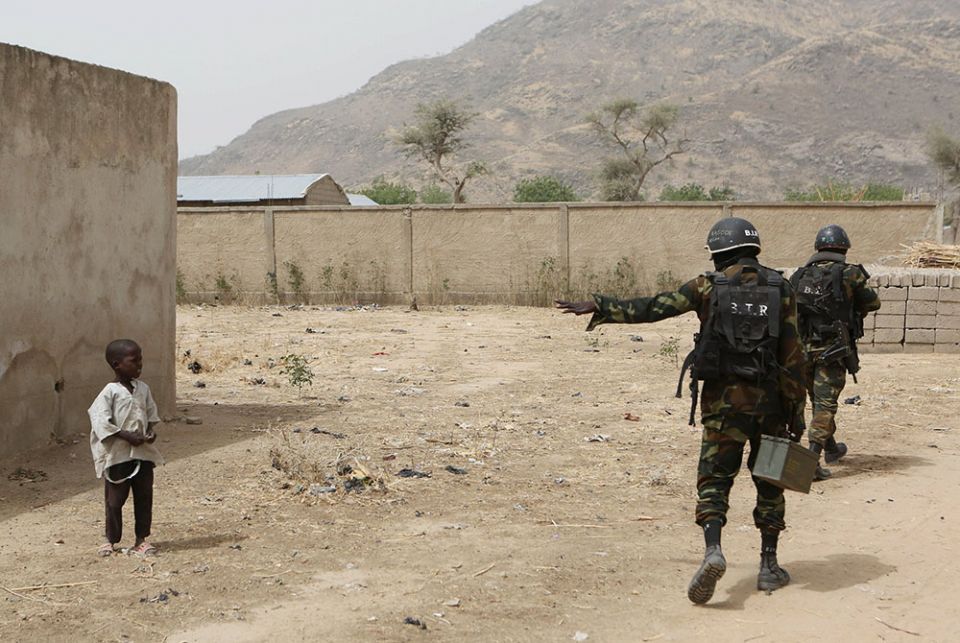 Cameroon has been in conflict since 2016 as English-speaking separatists in the Northwest ("Amba boys") seek to divide the country into two separate countries. The new English-speaking country would be called Ambazonia.

The separatists feel that the Northwest region has never had fair and just representation at the government level. Since 2016, the national government has been sending soldiers to subdue the separatists, but this has led to extreme violence between the soldiers and the freedom fighters. It is the people who suffer, as both sides accuse them of being loyal to the other side — like the African proverb: When the lion and the elephant fight, the grass suffers.

It was June 30, 2020, about 3:00 p.m. in Shisong, Cameroon. I was standing on the balcony of the convent infirmary when I saw people running towards the nearby St. Elizabeth's Catholic General Hospital and Cardiac Center operated by my congregation, the Tertiary Sisters of St. Francis. I could feel the panic and understood immediately that the military was coming.

After about 10 minutes, the crowd intensified and I saw armed soldiers in full and frightful combat attire running towards the general ward of the hospital. Three women coming towards them were ordered to stop and sit on the ground, while another soldier fired three shots into the air. Three of the soldiers jumped the embankment that separated the hospital from the road, and ran towards the hospital. However, the nurses on duty, although traumatized by the gunshots, had the presence of mind to lock the ward doors to protect the patients.

The soldiers fiercely kicked open the doors and entered with guns drawn, pointing them at the critically ill patients with tuberculosis, HIV/AIDS and other communicable diseases. Directly behind this ward was the isolation space for COVID-19 patients. At the time of this brutal attack, the district medical officer for Kumbo East and his team were at the School of Health Sciences, just a few feet from the general ward, screening for COVID-19 infections.

Still on the balcony, I saw another group of military exiting the female and gynecological wards, accompanied by Sr. Helen Anshoma, cardiologist and director of the hospital, and three boys. One youth was a bike taxi driver I had called to take one of the sisters to Nkar, a nearby town. The second was coming to see his sick father. I could not identify the third. It wasn't clear what was happening so I rushed down to see. On the way I called the senior divisional officer to inform him that the military had attacked the hospital.

As I neared the operating ward, a soldier standing outside was calmly explaining to the sisters that five Amba boys had attacked them in Jakiri. The soldiers had wounded them but they escaped. Now the soldiers had come to find them. They were questioning one boy waiting outside. He claimed he had rushed to the hospital after being wounded by a stray military bullet when riding his bike to Vekovi, a small town further on.

I saw another boy waiting for treatment in the hospital. A group of about 10 soldiers were forcing themselves into the surgical unit, despite the sisters' pleas to take their guns and leave. The commander barged into where an emergency operation was in progress. He was certain that the patient was one of the Amba boy attackers — but left after seeing it was not.

While shouting, the commander came towards me with a gun and said, "I can shoot you."

The soldiers followed their commander outside, still shouting at the nurses and patients. Outside they continued shouting at the sisters: "You liars, thieves, prostitutes, are you not ashamed? We have seen today that you are really treating Amba boys. We will teach you a lesson today. You say that you pray. What type of prayer? We will destroy you all and this entire village."

While shouting, the commander came towards me with a gun and said, "I can shoot you." I screamed out of fright and tried to call the senior district officer. When he realized I was on my phone, he began shouting the same threats. His behavior incited four others who joined him, speaking arrogantly in English and French and acting brutal and wild. After much pleading on our part, they finally let us escort them through the gynecological and female wards to the gate, all the while shouting and threatening to shoot us.

At the gate the commander accused the sister hospital director of being the leader of this group of thieves, liars and prostitutes, and promised to return the next day to make her and the group pay. One of the sisters shouted: "This is our leader and I cannot permit you to talk to her this way." He repeated the threats: "I can shoot you, thief, liar, rubbish. We are taking these three boys with us. If you try to prevent it, we will kill them. They will be locked up in the brigade until they tell us the truth." Then, they left.

This was not the first time the military have come here. They come constantly in search of Amba fighters or when their colleagues are wounded. Last year another group came, entered the surgical ward, shot guns in the center of the hospital and eventually left after the sisters insisted this was not permitted.  However, this was the first time I have witnessed such brutality. They were almost inhuman.

It was painful to see that these soldiers, who are trained to be the "forces of law and order," behave like Amba boys. In several occasions, we have explained to the government officials that our role as a hospital is to treat people irrespective of their political leanings, but their forces keep breaking into our hospitals in search of Amba boys and insisting that we should not treat them.

Related: 'Baptized and sent' to the Cameroonian refugees in Nigeria

In 2018 the ambulance of the cardiac center was confiscated with its very expensive equipment and medication — amounting to about $150, 000. Negotiations to get them back failed. That same year the ambulance of St Martin de Porres Hospital, Njinikom — one of our health institutes — was set on fire with all the medication and equipment. The doctor, nurses and a sister were beaten and punished by trekking 5 kilometers without shoes.

Last year the Amba boys kidnapped the director of our hospital in Ntasen-Bamenda to an unknown destination for two days. We were asked to pay a ransom of about $6,000. Our relentless efforts to get the Amba boys to understand  — what a hospital is, that guns are not allowed, that they should not block or burn the ambulances, or frighten the sisters and patients — are bearing no fruits. It is equally difficult to help the government officials understand that as religious women in the Catholic Church, our mission is to defend, protect and care for life, treating patients irrespective of their political, cultural, social or religious background.

Our congregation opened St Elizabeth's Catholic General Hospital in 1935. In 1954, a School of Health Sciences opened to train registered nurses, laboratory technicians, midwives and nursing assistants. In 2002, we opened a diagnostic cardiology department with the Italian Bambini Cardiopatici nel Mondo. It evolved into a full-fledged cardiac center in 2009 —  the only one in the country.

It has a sterling reputation, yet it is caught between the two factions. We sisters manage a number of other health centers in Cameroon that have closed due to similar violence and destruction. There is little global attention given to this conflict and consequently, there is no end in sight.

[Kenyuyfoon Gloria Wirba of Cameroon is a member of the Congregation of the Tertiary Sisters of St Francis of Assisi – Cameroon Province. Her ministry has included missionary experience in Cameroon, writing, and lecturing at the Pontifical University of Rome.]

Q & A with Sr. Anastasia Gill, rushing in to assist victims of Delhi riots