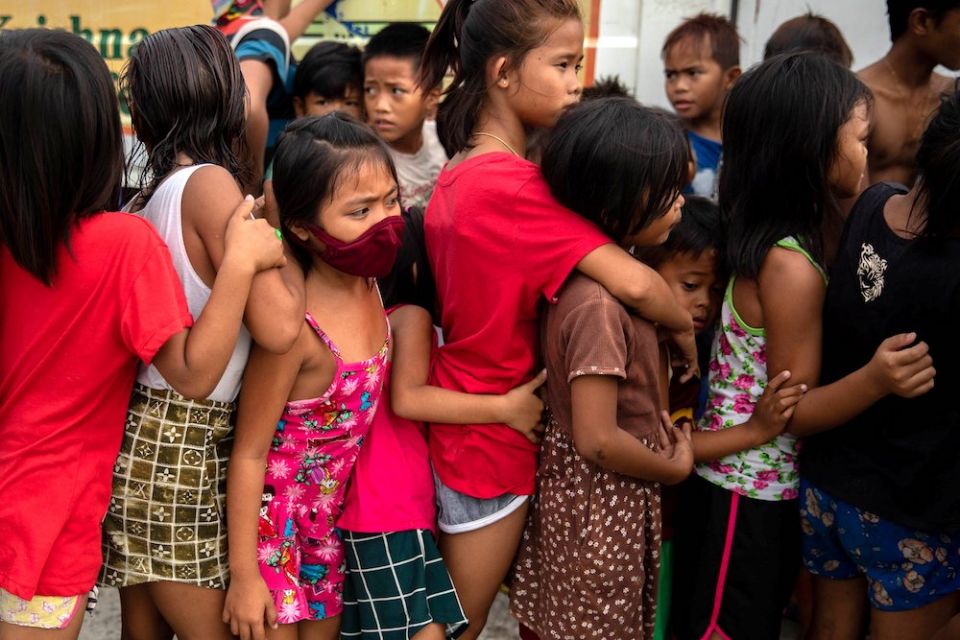 Children wait in line for food from an unidentified relief program in a poor section of Manila, Philippines, Jan. 21, 2021, during the COVID-19 pandemic. Sisters in the Philippines were among those receiving funds distributed through the International Union of Superiors General. (CNS/Reuters/Eloisa Lopez)

With the world eyeing the first anniversary of the start of a global pandemic that has affected more than 100 million people and killed more than 2 million, the head of the International Union of Superiors General (UISG), the global organization representing approximately 600,000 sisters, says the group is poised to continue distributing funds for micro-projects in 2021 given ongoing needs.

UISG continues to distribute more than $1.8 million from foundations and donors, including about $600,000 from congregations, for pandemic-related emergency projects in the last year, said Loreto Sr. Patricia Murray, UISG's executive secretary.

In the days ahead, Murray said, "there will be a need for financial support for new micro-projects so that people will be helped to rebuild their lives."

"With a renewed sense of community we can hopefully reach out to those most in need. Sisters will be there among the people working and helping to create new ways of living in true love and solidarity," Murray wrote in an email to Global Sisters Report following interviews about the pandemic response with GSR staff in late 2020.

UISG is not the source of the funds, but the distributor. This is a new initiative and role for the Rome-based umbrella organization and one that is limited only to the pandemic response, Murray said.

"This would not have been our work in the past, " Murray said in a Dec. 9 interview with GSR staff. "We don't ever see ourselves as a donor organization."

UISG's direct distribution of funds to congregations was needed given the crisis many congregations face because of the pandemic, including ministries that have been paused or even halted because no income was coming in, Murray noted.

"At a time of pandemic," Murray said in December, "funds are such a great need and a great support to congregations that we feel blessed that people have been so generous — religious congregations of women and also funders who work with sisters and know their capacity to make the little they get go a long way."

While it is too soon to say how much funding will be available in the future and distributed this year, Murray said needs will continue in 2021 as the world faces serious pandemic challenges, such as a slow and uneven global vaccine distribution. 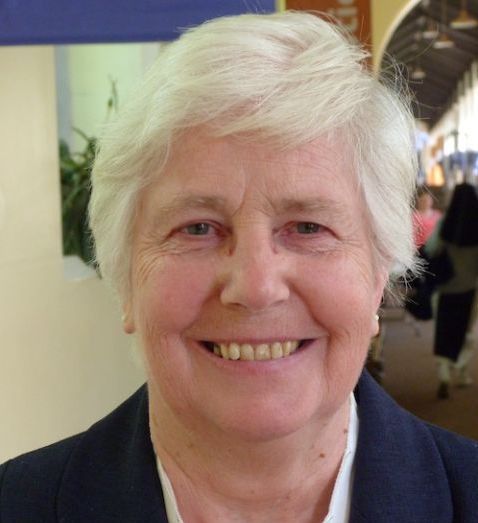 Sr. Patricia Murray of the Institute of the Blessed Virgin Mary is executive secretary of International Union of Superiors General. (Sarah Mac Donald)

"The pandemic is not coming to an end in many parts of the world. In fact, the second wave or the third wave is as demanding, and in some cases, it's even more serious," she said in the interview with GSR staff.

The amounts provided to congregations have ranged from $3,000 to $6,000 per congregation, Murray said. "That amount goes far" for the purchase of cleaning and protective materials, "supporting families in need" and assisting local communities with necessities like water or food when so many people sisters serve are now unemployed.

The "small-scale" projects UISG has funded are those that have found new ways "to care for and protect people," such as one in Zambia where water for hand-washing was provided in plastic containers and stored on a wooden frame. In areas where sanitation was challenging to begin with, you have the poorest communities "sharing what they have."

"Sisters in India have established a telephone service to answer questions and take away the fears of people," Murray wrote in her follow-up email. "Others have donated their salaries so that workers would not lose their jobs. Still others share their daily food with their neighbors who struggle to feed their families."

Other sister-run projects in India, Murray said, include reclaiming land and helping those returning from large cities who have lost jobs to plant and raise vegetables. That points to similar challenges elsewhere, Murray said: "In many countries, food is desperately needed to feed families and ensure that children are well nourished. Communities of sisters are working with local groups to source food and then cook and distribute it."

She added: "This is the kind of ingenuity that moved sisters to quickly respond to local needs."

Elsewhere, Murray said, sisters in a number of African countries are conducting workshops to help people understand the dangers of COVID-19 and teach them about possible precautions.

In Latin America, sisters who work as doctors and nurses are making house calls to those who are ill, and in all regions of the world, sisters with medical training continue to work as front-line workers in hospitals and clinics. Murray added that on every continent, sisters are working with local groups and cooperatives to make masks and other protective items.

Murray said UISG to date has completed three rounds of funding. In the first round, during the initial months of the pandemic, UISG had about $900,000 to distribute in funds provided by Catholic and non-Catholic donors and congregations themselves.

A second round involved $180,000 in funds received from the U.S. government's foreign assistance arm, USAID, in conjunction with Sant'Egidio, an Italy-based lay social service association that provides to meet the needs "of those on the margins."

That grant focused on the needs of people in more than 20 cities in Italy, including people experiencing homelessness, refugees, migrants and those who have been trafficked or experienced domestic violence. That grant also assisted women religious communities in which many sisters were infected with COVID-19 in community settings and had experienced a high number of deaths.

In the third round of funding, UISG was given a further $750,000 to distribute from the two Hilton bodies.

Additional government funding has been promised to UISG by the British Embassy to the Holy See.

Initial distribution of funding early in the pandemic focused on Italy and Spain because they were the countries that the pandemic first hit badly. That was followed by funding to Latin American congregations, Murray said, particularly in seven countries in the Amazon basin.

From there, Murray said, "we gave funds to communities in the Middle East, which were dealing with both conflict and various levels of destruction and the COVID pandemic." UISG then responded to the need in many countries in Africa, particularly in French-speaking Africa and in South Africa because another fund had been established by a donor for Eastern Africa, she said.

Funds were then distributed in several Asian countries, including India, Sri Lanka, the Philippines and Bangladesh.

"Now, we are continuing the distribution in Asia, Africa and Latin America, repeating some of the original cycles," she said.

Sr. Jane Wakahiu, associate vice president of program operations and head of the Conrad N. Hilton Foundation's Catholic Sisters Initiative, said the support to UISG was part of more than $3 million of coronavirus-related assistance the foundation provided to 27 sister congregations and organizations and wider church bodies in 2020. This includes funding for programs in North America, Latin America, Europe, Africa and Asia. 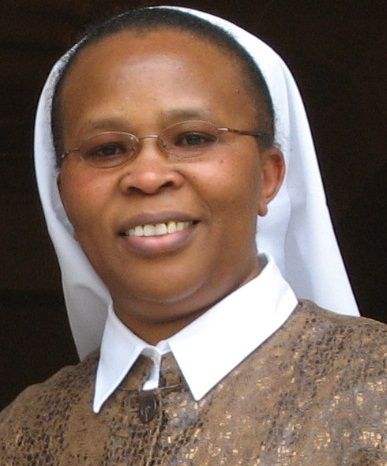 Sr. Jane Wakahiu, a member of the Institute of the Little Sisters of St. Francis in Kenya, is associate vice president of program operations and head of the Conrad N. Hilton Foundation's Catholic Sisters Initiative. (Provided photo)

One such program was the Association of Consecrated Women in Eastern and Central Africa, known as ACWECA, which received $250,000 to establish a COVID-19 response fund supporting congregations serving elderly communities.

Wakahiu told GSR it is too early to say what coronavirus-related programs the Hilton Foundation might fund this year, but she and the foundation know there continue to be "immediate needs" globally, particularly in the global south, where "people are experiencing a lot of pain because they've not been able to resume their livelihoods."

Amid that reality, "sisters are holding on to hope, living in solidarity with the communities they serve," said Wakahiu, a member of the Institute of the Little Sisters of St. Francis in Kenya.

Wakahiu said she sees both hope and serious challenges ahead in 2021.

"I see it as a time of grace in the middle of the crisis," she said.

"Sisters [are] more conscious about the environment, people's suffering and families valuing the bonds they have built over the years," she added. "Love is sustaining families that cannot easily connect because of travel restrictions."

At the same time, Wakahiu said, "the crisis has created cascading challenges: Domestic violence, human and labor trafficking are on the rise. There is a sense of loss, the experience of darkness, weakness and fragility. I find myself turning to the word of God: 'I am with you always, until the end of time.' What do we learn during these times, and how can I ease the burden of those underprivileged?

"As sisters, we have a role in providing spirituality of accompaniment, listening, hearing and being present to those who are suffering in the margins, particularly those who cannot speak or express their feelings."

Murray had a similar reaction: "Throughout the world, many are grieving the death of the way of life with which we were all familiar, but in the midst of that, we are discovering that we are being called to live in a new way."

"This pandemic has highlighted the importance of global solidarity, compassion for the other, great care and sensitivity for the other," she said. "It is a call to humanity to ask, 'How do we want to live community now and into the future?'

"There is a sense in which we are all being called inward, to ask ourselves what are the important things in life."

Q & A with Sr. Conchetta LoPresti, sharing God's word through her hands

Q & A with Srs. Catherine Bashir and Violet Sampour