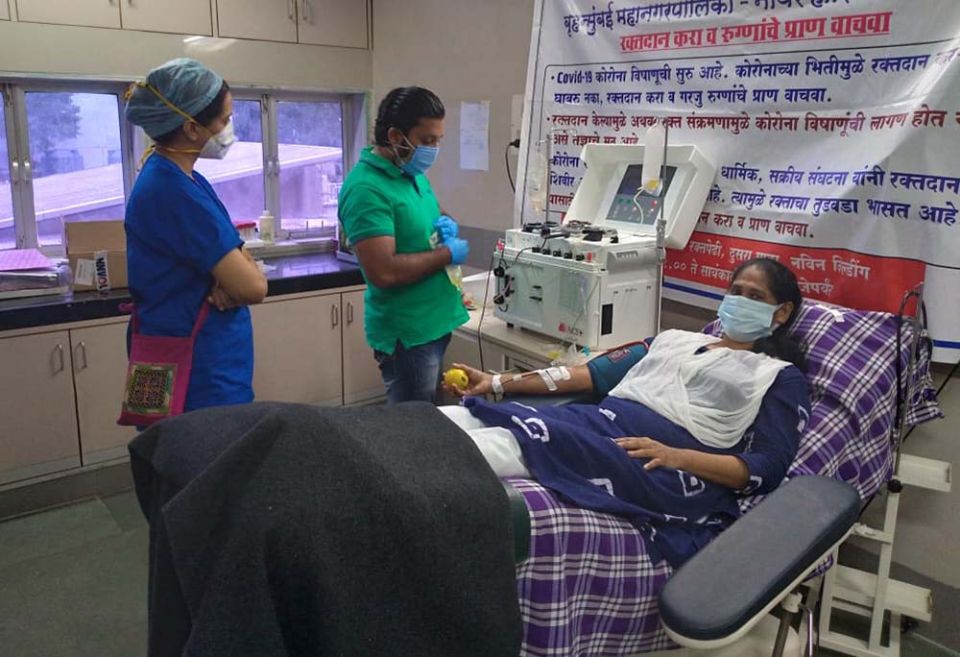 MUMBAI, INDIA — Though she is a hospital administrator and nurse in western India who once trained nurses in the South Sudan during ethnic fighting, a Catholic nun's worst fear about getting COVID-19 was going on a ventilator.

"I was certain that once I was put on the ventilator I would not survive. I would visualize how I was going to die," said Holy Spirit Sr. Sneha Joseph, remembering a harrowing incident waking up after her appendectomy years earlier, intubated and gasping for breath.

But when she caught the virus, she not only escaped the ventilator, she survived after 18 days of treatment and ended up donating convalescent plasma to try to save the lives of coronavirus patients. "There was an inner voice that urged me to donate plasma," she said.

Joseph was honored Nov. 1, 2020, as a COVID-19 Warrior by the governor of Maharashtra state at his residence in Mumbai, the state capital.

"I am proud of you. Thank you for your selfless service to society," Gov. Bhagat Singh Koshyari told Joseph while presenting the member of the Missionary Sisters, Servants of the Holy Spirit a letter recognizing her "exemplary service."

The governor, who is the Indian president's representative in the state, pointed out that Joseph has inspired many COVID-19 survivors to donate blood to treat other patients.

The Warrior award program was organized by Spandan (heartbeat) Arts, a local nongovernmental organization, along with Ashish Shelar, a legislator in the pro-Hindu Bharatiya Janata Party. 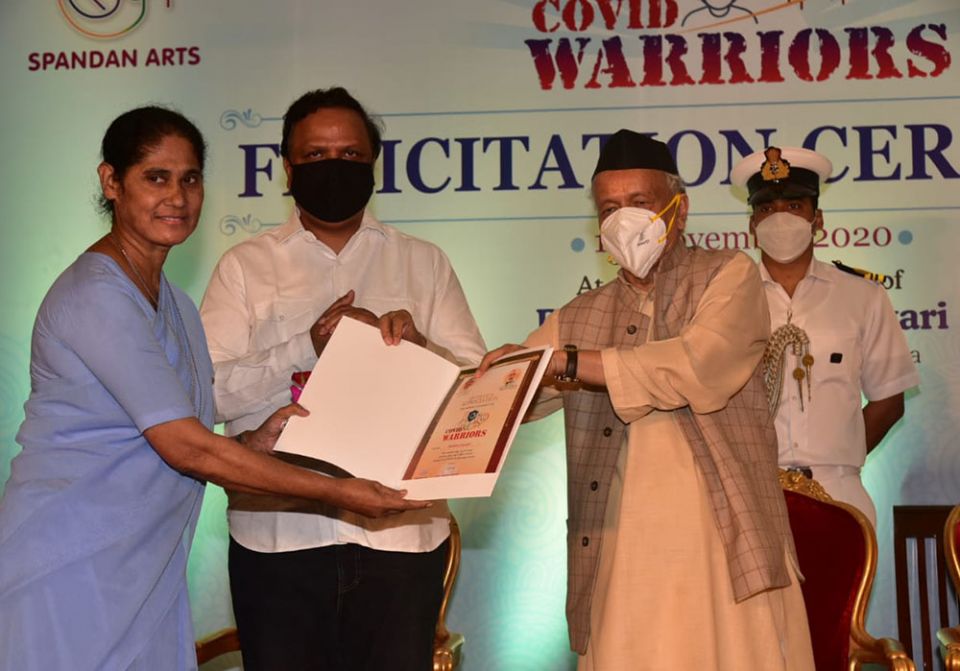 Joseph donated her blood for the fifth time Dec. 9, in what news reports called a first for a female donor. "I still want to donate [blood], however, doctors advised me to wait," the 57-year-old nun told Global Sisters Report in November after her fourth donation.

Joseph, who has a master's degree in nursing, is currently the chief executive officer of the Holy Spirit Hospital, a multispecialty tertiary care institution her congregation manages at Andheri, a suburb of Mumbai.

The nun donates plasma only to poor COVID-19 patients in Nair Hospital and Medical College, a government-managed institution in Mumbai.

Ramesh S. Waghmare, a doctor and associate professor of the blood bank at Nair Hospital who facilitated Joseph's blood donation, defines plasma therapy as a medical procedure that uses the blood of a recovered patient to create antibodies in those infected.

As part of the procedure, plasma, the fluid part of blood containing antibodies, is separated and transfused into a COVID-19 patient's body. "This procedure has not been officially approved as an effective measure to treat COVID-19 patients. But it has shown positive results in our hospital," Waghmare told GSR over the phone.

The doctor said his hospital conducts "guided plasma therapy" on COVID-19 victims with convalescent plasma from recovered patients such as Joseph as part of a clinical trial.

"We transfuse two units of 200 milliliters [6.76 ounces] each on a patient in two successive days and our results so far have been successful," Waghmare explained.

The doctor lauded Joseph for donating plasma multiple times when other survivors have been reluctant to support the trial even once. 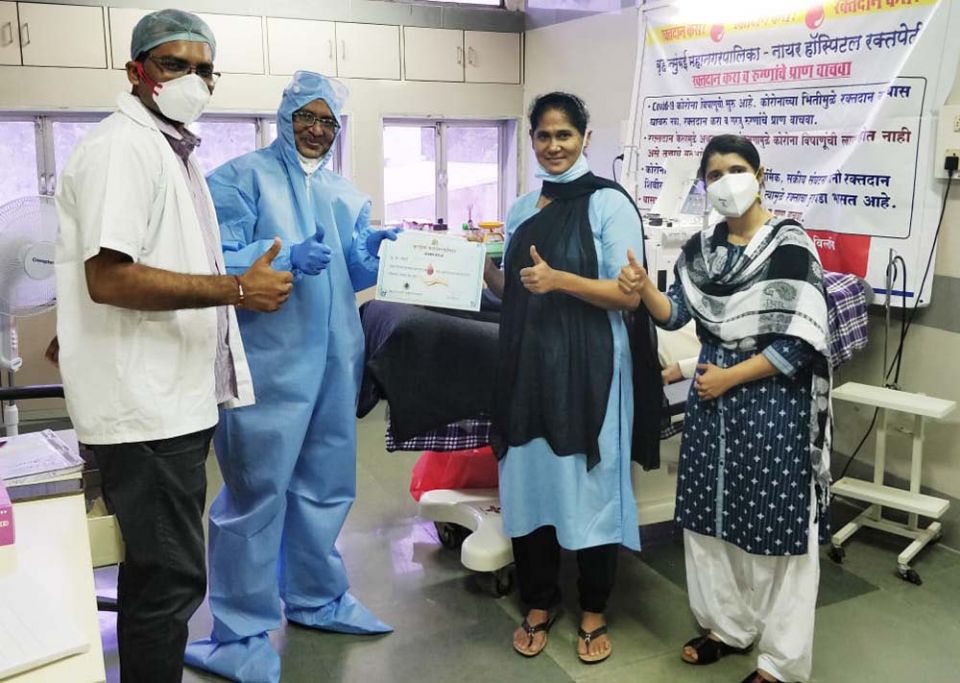 The Catholic nun, he added, has expressed willingness to assist them in the trial by giving her plasma unconditionally. "We are all indebted to her," he said.

Joseph, however, believes that it was God's plan to let her contract the disease so that she could gain new insights into her religious life and her desire to serve impoverished people.

She had her fears when she became ill, as the disease is so new.

"When I knew that I had contracted the virus, I was scared and thought my end had come," Joseph recalled.

The nun said she had mentally prepared to die, if that was God's will. She battled for life in the hospital for 18 days in May. A week after recovery, she was back on duty.

"Now I realize that God had a special purpose in letting me contract COVID-19. Initially, I was disappointed, as people keep away from COVID-19 patients even after they are healed," she said.

Many people have fears and misconceptions about donating plasma, but Joseph had no problem, says Madhavath, who is also the medical superintendent of Mumbai's Holy Family Hospital. "It is really a humanitarian work," she told GSR.

Madhavath points out that not everyone can donate plasma. "A woman is eligible only if she has not conceived. Pregnancy leads to cross-reactive antibodies that can cause harm," she said. (Tests used in Western nations to determine antibody safety in women are largely unavailable in India.)

"It takes at least three hours for donating the blood, and it needs a lot of courage and commitment," the doctor nun explained. What she admires about Joseph is that the Holy Spirit nun could "spare so much time from her hectic work schedule in her hospital where she does double jobs as an administrator and a nurse."

Madhavath said all sisters in the country are "really proud that one of us has done a marvelous work for the humanity."

Even though she had heard about plasma therapy, she had no idea how to go about it. One of her colleagues, Pravin Nair, encouraged her to donate.

Joseph fulfills all requirements of a plasma donor. "Generally, one needs an antibody [level] greater than three for donating plasma, but mine was greater than 10," she said. "My serum protein level also was on the higher side, a good indication for donation." 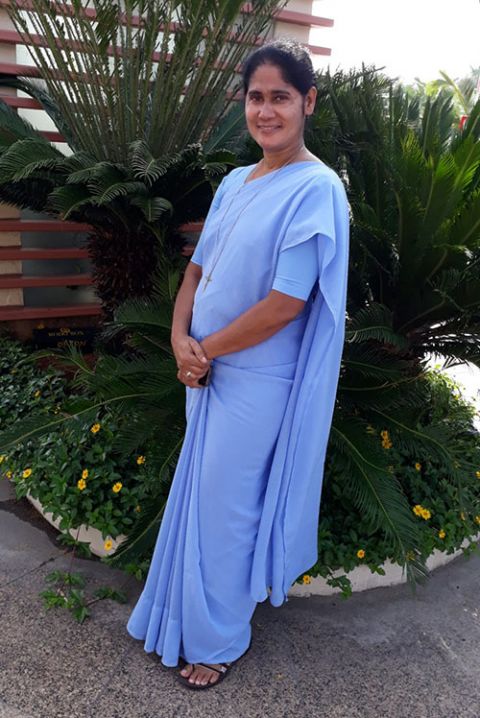 Nair hails Joseph as a self-driven person who is committed to helping the poor. "When I informed her about the opportunity and importance of donating plasma, she identified the government hospital and started donation," said Nair, the head of the microbiology department and infection control at Holy Spirit Hospital.

He added that Joseph always maintains that her mission in life is to serve others, especially poor people in a time of pandemic. She ignored offers from private hospitals and chose the government hospital since poorer patients flock there, he explained.

Another admirer of Joseph is Auxiliary Bishop Allwyn D'Silva of Bombay. "She had a very bad attack and suffered a lot," said the prelate, who shot a video of the sister donating plasma to encourage others to follow her example.

"It is very rare for a woman to take such a step, but she realized the pain and suffering of COVID-19 patents and that helped her walk the extra mile," D'Silva told GSR.

The prelate said he has found Joseph to be "a very humble" person. "She does it not for any fame," he said.

Many others work in Catholic hospitals, but Joseph has become an example not only for Christians but others, too, D'Silva said. "Her life gives us a clear message: What we get, we need to give back."

Joseph, the youngest among six children in a Catholic family of Kerala, a southwestern Indian state, wonders why her donations have drawn so much attention.

"As a child I had a passion to serve the poor and I grabbed the opportunity to give my plasma for their treatment," she said. "I want to help only the poor who will not be able to pay for the treatment."

[Saji Thomas is a freelance journalist based in Bhopal, India, who has worked for several mainstream newspapers such as The Times of India. He writes regularly for Matters India, a news portal that collaborates with GSR and focuses on religious and social issues.]