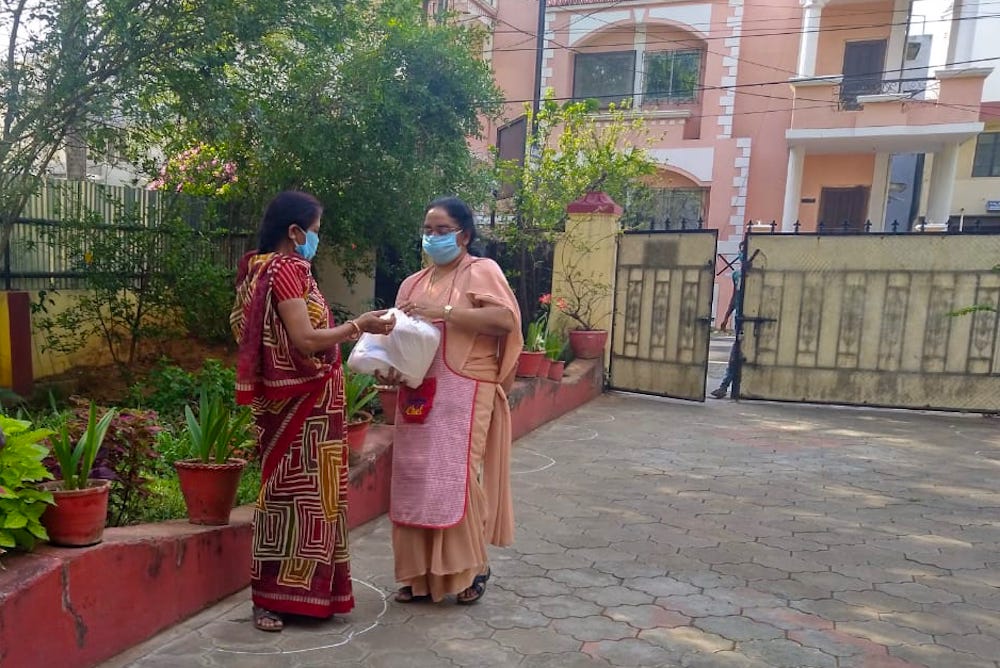 Sr. Lijo Joseph calls a Kenyan number on WhatsApp from a hospital in Chikmagalur, and a young woman responds, "Hello."

The member of Congregation of the Mother of Carmel then says: "I am Sr. Lijo Joseph, a doctor calling from Corona Care from India."

The woman on the other side immediately responds, "Yes, I contacted your office." The panic-stricken woman begins to narrate her 3-year-old daughter's health condition.

"I listened without interrupting her. When she realized I was listening, she sounded comfortable," Joseph told Global Sisters Report.

Joseph is among 12 sisters in India who are doctors who have joined Corona Care, a global counseling network to support those suffering from the coronavirus and those needing immediate medical guidance.

The Kenyan mother was afraid her daughter, who had a sore throat, had contracted COVID-19. One of the daughter's friends had tested positive.

"I gently told her that it was not yet confirmed if her daughter was infected," Joseph said. "In the worst case, the girl could easily recover with proper care in consultation with local doctors." 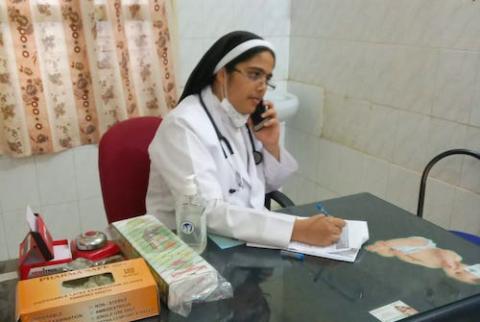 Sr. Lijo Joseph of the Congregation of Mother Carmel talks to a patient over the phone in her clinic in Chikmagalur Diocese, Karnataka, India. (Provided photo)

Joseph assured the mother that the mortality rate of coronavirus patients is lower than other diseases and advised her to take preventive measures, such as social distancing and frequent washing of hands.

"After more than 15 minutes of counseling, she was happy and thanked me for sparing time," she said.

The Indian nun said the network offers her a great opportunity to go to the peripheries to heal human suffering. She also works as a doctor at a church hospital in Chikmagalur, a diocese in the southwestern Indian state of Karnataka.

The Catholic Health Association of India, a national body of the Catholic hospitals and clinics based in the southern Indian city of Hyderabad, launched the counseling network Feb. 26.

Claretian Fr. George Kannanthanam, the association's deputy secretary, said they thought of the network to help those suffering in China and other countries where the pandemic was raging at that time.

"India then had only a few coronavirus positive cases," the priest told GSR.

Besides the 12 sister doctors, the network has 18 psychologists and social workers in India, said Kannanthanam, who coordinates the project.

"The nuns led it from the start. They trained themselves to deal with the crisis and readied others in the network to help the needy," he added.

"The service is available round the clock," the priest added. 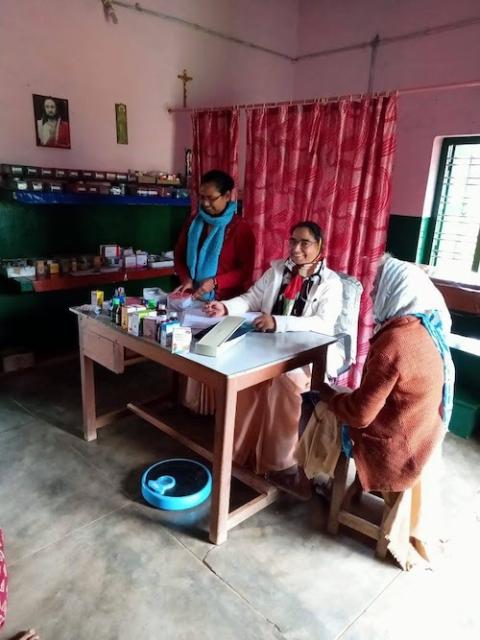 Another Corona Care member, Sr. Alphy Thaikkadan, is a general physician in a private hospital in Jabalpur, a town in the central Indian state of Madhya Pradesh.

"My life has new challenges every day now," she told GSR.

Besides attending to patients in her hospital, the School Sisters of St. Francis nun attends to the spiritual and psychological needs of those locked down in India because of the coronavirus pandemic.

"I have to attend the patients visiting me directly and to panic calls from anywhere in India and abroad," Thaikkadan said.

Kannanthanam said anyone can call the network directly or email with their queries. Three people at the help desk attend to the calls and connect them to doctors immediately.

If a doctor is not available immediately, the person who answered the call collects the caller's details and fixes a convenient time for the doctor to call back. The help-desk attendant also refers cases to physiologists or social workers if the caller requests.

John Santosh, the founder of BillionLives, which provides technical support to the network, said Corona Cares has received calls from England, Japan and Persian Gulf countries, among others.

"As the demand increased, we made tie-ups with volunteers in other countries. Calls can be made directly to them after selecting the language," Santosh told GSR.

The Catholic technocrat said they do not record call details, as those are the "privacy concerns of the caller."

Sr. Beena Devasia Madhavath, an Ursuline of Mary Immaculate nun who heads the Sister Doctors Forum of India, said they started the network after reading about people in China who had no access to the right information on the virus from trained doctors.

"Many lived in uncertainty and confusion," Madhavath, who leads more than 1,000 nun doctors working in various parts of India, told GSR.

However, the network had to focus on India, too, where the virus was spreading fast.

Madhavath, a gynecologist, now serves as the medical superintendent of the Holy Family Hospital in Mumbai, capital of Maharashtra, the western Indian state that has the most coronavirus cases in the country. 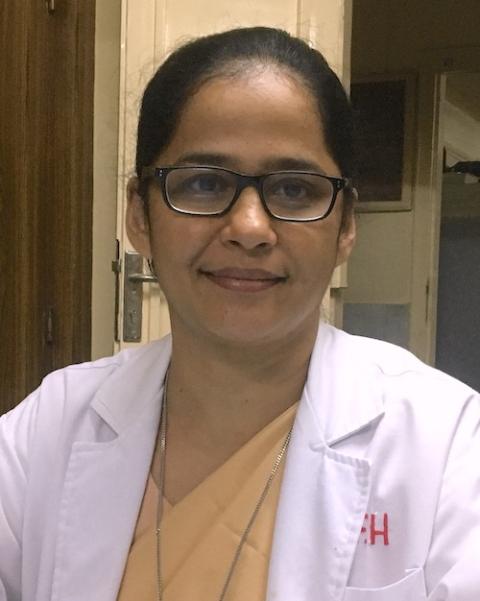 Ursuline of Mary Immaculate Sr. Beena Devassia Madhavath, who heads the Sister Doctors Forum in India, in her office in the Holy Family Hospital in Bandra, a western suburb of Mumbai, western India (Jose Kavi)

India reported the first COVID-19 case Jan. 29 in the southwestern Indian state of Kerala. The patient was a medical student who came from Wuhan, China, where the global pandemic was first identified. Two others who traveled with her also tested positive, but all of them recovered.

The scenario in India, however, changed when Prime Minister Narendra Modi imposed a 21-day lockdown beginning March 25 that he further extended to May 3. The lockdown has since been extended multiple times and now runs through June 30, though rules are relaxing in some places.

Madhavath said they wanted to provide common people correct information about the virus and free their worries and uncertainties in life.

"During calamities like this, people look up to the Catholic religious for immediate help," Madhavath said. "This was another reason for developing the online platform with sisters for counseling and guiding people."

Thaikkadan said the prolonged lockdown has made people all over India desperate.

"I get most calls from various states in India. Many want to confirm if they are infected, as they are scared of the virus," she said.

According to her, both the educated and the uneducated are ignorant about the virus.

"They really believe they would die if they contract COVID-19, so they want to take as much precaution as possible," she said.

She attended to a political leader from Kerala whose son had returned from the United States.

"He spoke for almost half an hour about his doubts about COVID-19 and asked if his son could infect others in the family," she said.

None of the family members, who completed the 14-day mandatory quarantine period, had contracted the disease. "But still, fear haunted them."

Thaikkadan said people who live in poverty require more than words of consolation. They want evidence, such as ultrasounds, to assure them they are not infected. In such cases, the doctors show them images from the ultrasounds.

"They have more faith in sonography, although they don't understand anything. They believe us after seeing the image. They also carry the image to their village to convince others that they are fine," Thaikkadan said.

Many poor villagers approach Thaikkadan for food, as the lockdown has dried up their income.

"We try to provide them dry rations as far as possible," she said.

Thaikkadan said she is happy she joined Corona Care. The pandemic and the counseling have "helped me become rooted more in Christ to help the suffering."

The counselors say a major worry among all callers is the possibility of dying from COVID-19.

One such caller was the father a 6-year-old girl from Bengaluru, the capital of Karnataka state. He talked to Sr. Prema Misquith, a homeopathic doctor working in the northeastern Indian state of Mizoram.

The Sisters of Little Flower of Bethany nun said the man called the network because he was not satisfied with his visit to a local doctor.

Misquith said the man sounded frightened as he narrated his daughter's fever, stomach pain and vomiting. The first thing he wanted to know was if his daughter was infected with COVID-19.

Because stomach pain and vomiting are not usually symptoms of COVID-19, "I told him that she was not infected with the viral disease and there was no need for him to panic," she said.

Misquith also offered to pray for his daughter's speedy recovery. "I was surprised when the Hindu man readily accepted my prayer offer. He thanked me for the prayers and agreed God would heal his daughter."

The nun also shared with him a list of government hospitals in his city for him to approach in an emergency.

The network also has volunteers in other countries, such as Claretian Fr. Jijo Kandamkulathy in Macau, China.

"The sisters are the backbone of this network," Kandamkulathy told GSR. "They find time to help people from their tight schedules in their hospitals."

Kandamkulathy, who "strongly" believes "social work and charity go together," attends to calls from Chinese people and arranges resources for those who are sick.

For him, the network is a platform to connect with people, especially when they are confused and traumatized.

"My life becomes meaningful when it is spent for others," the Indian priest told GSR. "The Catholic Church has given me education and opportunity to serve others. I am making good use of it by helping those suffering from COVID-19."

Similarly, a group of health care professionals in the United Kingdom, mostly from India, who are associated with Caring Hands India seeks the help of the nuns' counseling network: They have asked the nuns to counsel their parents living in India.

One of the professionals, Soji Alex Thachankary, said the network is a great help for their parents at home, "as we cannot visit them physically during lockdown."

He said the network's dedicated sister doctors are available day and night for "everyone in distress, whether in India or abroad."

Thachankary said he sees the network continuing its service even after the lockdown is lifted.

"It has a huge network in India and abroad," he said.

"We understand our duty does not end fighting the deadly disease. We have to be available to people who suffer from post-COVID trauma. So we will be around even after the corona war is over."