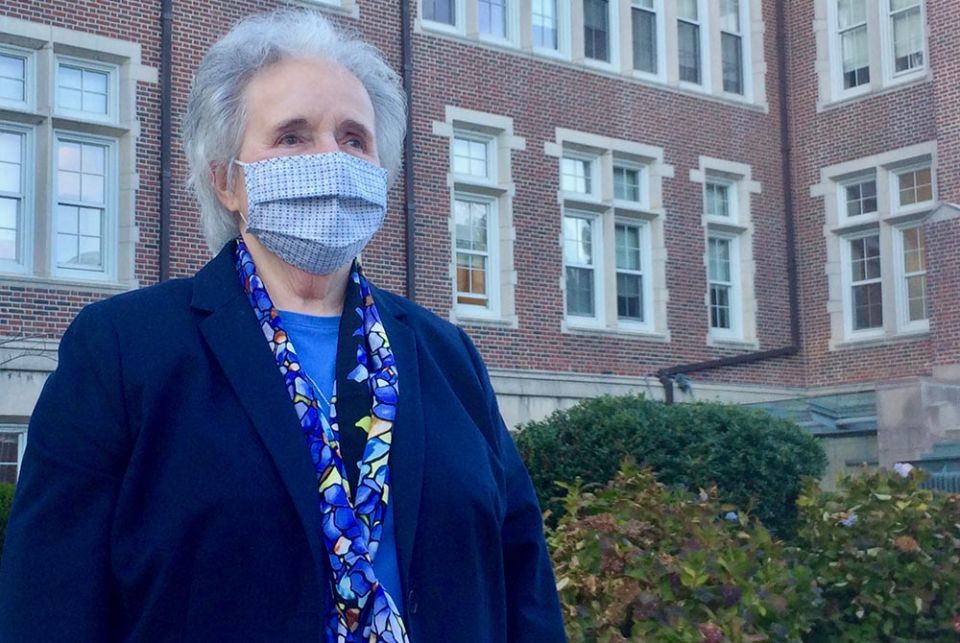 Sr. Janet Eisner, a Sister of Notre Dame de Namur and president of Emmanuel College in Boston and the country's longest serving current president of a Catholic college or university, gave Global Sisters Report an inside look at how she is leading her school through what she said could be her most trying year as president (Alexander Thompson)

Boston — Margaret McKenna was relaxing at her vacation home in Maine in early August when she got the call.

On the other end of the line was Sr. Janet Eisner, a Sister of Notre Dame de Namur and the president of Emmanuel College, where McKenna serves as chair of the board of trustees. 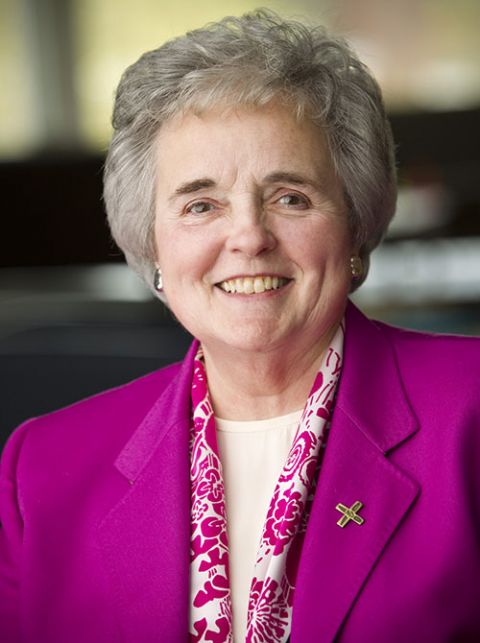 The small liberal arts college nestled in the heart of Boston had planned to reopen its doors in September with students back in dorms and many classes in-person, but over the phone that day, Eisner told McKenna they had to change plans and go fully remote because of the coronavirus pandemic.

The two deciding factors for both women were concerns about the college's capacity for testing for COVID-19 and the safety of the campus' high-density dorms amid rising case numbers nationwide.

Later that afternoon, the pair convened a meeting of the board of trustees' planning committee and advised that the college switch to a virtual return.

"It was the last thing we wanted to do, but we knew we had to do it," Eisner said in an interview with Global Sisters Report.

The decision, which came just a few weeks before classes were scheduled to start, alarmed and upset some students, Brendan Hardie, 21, a senior at Emmanuel and the president of the student body, told GSR. However, Eisner is respected on campus, and most students understood.

"You can't really make everyone happy," Hardie said. "You can only make the decisions that are best for the institution and the student body. That can be hard."

Eisner, 80, is used to hard decisions. She has been at the helm of Emmanuel since taking office in 1979, 41 years ago, making her both the longest currently serving female college president and the longest serving current president of a Catholic college or university.

"I've been around a while," Eisner said with a smile.

No amount of experience could have prepared Eisner for a year she said may end up being the toughest she has had as president. The pandemic sent students home from campus in the middle of last semester, forced classes to transition online, canceled commencement ceremonies and threw budgets from black to red.

Those challenges piled on top of long-term worries hovering over small, private, tuition-driven institutions like Emmanuel, such as declining numbers of high school graduates and skepticism about the value of a liberal arts education.

In response, a number of Catholic colleges are considering deep cuts to faculty and programs that have sparked fierce backlash from students, faculty and alumni.

Emmanuel has managed to avoid that so far. Yet Eisner called her college's outlook "positive, not Pollyanna."

In a normal year, Emmanuel has about 2,200 students, the vast majority undergraduates, Eisner said. That number fell by about 150 students this fall.

In total, the college, which according to its financial statements brought in about $72 million in revenue in the 2019 fiscal year, anticipates it will lose close to $5.5 million because of the pandemic so far, a college spokesperson confirmed to GSR.

The administration is plugging the gap with money from the unrestricted portion of its endowment and some staff furloughs, but there have been no faculty cuts and fewer than 10 staff layoffs, Eisner said. The school's endowment is actually up $6 million, she added.

She said firing faculty was off the table because keeping school's student-to-faculty ratio low is a key element of Emmanuel's Catholic mission to care for the whole student.

"When you have a pandemic or any kind of tragedy, what really comes out is where your values are," she said. 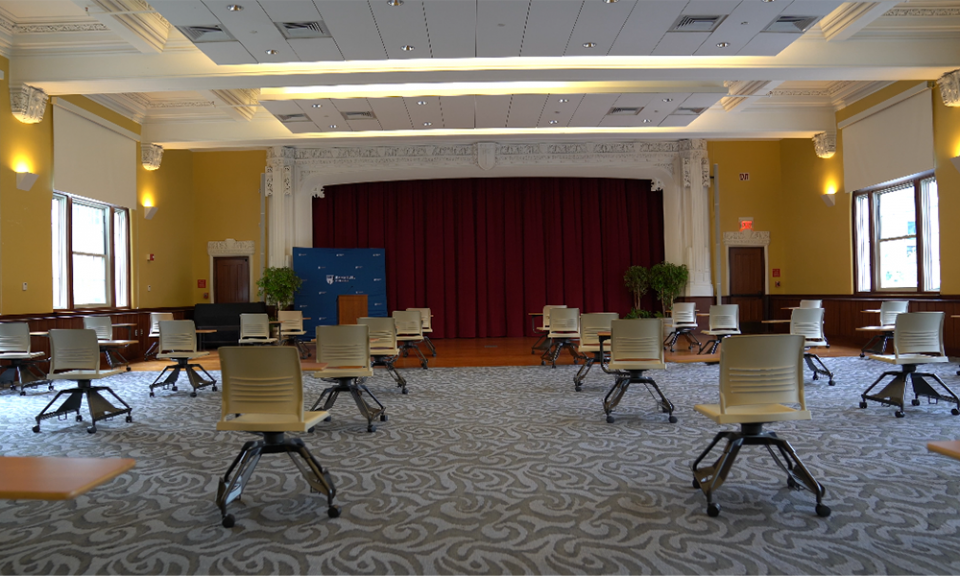 Emmanuel College's auditorium will be one of the unconventional spaces the college uses for classes when 60% of its students return to campus next semester. (Courtesy of Emmanuel College)

Eisner credits the school's handling of the pandemic to the administrative team, the faculty, staff and students — everyone but herself. Yet her colleagues say her leadership and, especially, her ability to listen to every viewpoint then act decisively has allowed the school to weather the crisis so far.

Eisner, born in Boston in 1940 and raised in industrial Lynn, Massachusetts, graduated from Emmanuel in 1963 and returned some years later as an English professor, dean of admissions and, eventually, president. Today, she walks the same halls she has for more than a half-century with a determined step and a warm smile underneath her face mask.

Eisner's confidence in challenging times comes from experience. The school, founded as a women's college in 1919, was on the verge of crisis in the late 1990s, with enrollment down by half from about 30 years earlier, the Associated Press reported at the time.

"For an all-women's college to make that decision — it was a big decision," McKenna told GSR. "It really in many ways, I believe, turned the tide for the college." 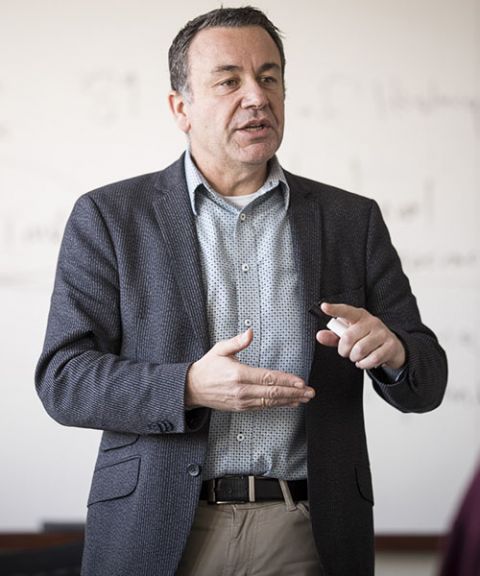 Petros Vamvakas, a professor of political science at Emmanuel College, has worked with Sr. Janet Eisner for years as a member of the faculty senate. (Courtesy of Emmanuel College)

Over her many years in the president's chair, Eisner has also built credibility with the college's 227 members of the faculty and staff, said Petros Vamvakas, a professor of political science and member of the faculty senate.

"She's not going to tell you something when she's thinking something else," he told GSR. "Even in the last few months in the Zoom existence we're all living, when she comes on and speaks to a faculty forum or speaks to the faculty directly, there seems to be more of an at-ease sense among the faculty."

Eisner has been speaking to the faculty senate frequently over the past few months — and listening, too.

Eisner and Emmanuel have one more major hurdle to clear before the end of 2020: reopening the campus.

Sitting in a conference room overlooking the quad on a warm, sunny November day, Eisner noted that normally, she would watch footballs and Frisbees pass back and forth across the window.

Currently, the plan is to bring about 850 students, 60% of dorm capacity, back to campus to start the spring semester on Jan. 27, Eisner said. All faculty, staff and students who attend in person will be tested twice a week in partnership with the nearby Broad Institute, a world-renowned lab at Harvard University and the Massachusetts Institute of Technology.

About half of classes will take place virtually while the other half will be taught at least partially in-person in socially distanced classrooms or in the gym and auditorium.

Optimistic about the future despite the challenges to come, Eisner harkens back to the past.

"We've never been through a pandemic," she said. "My predecessors went through one, because they opened the college in 1919, but they opened it, so they were courageous. How could we be less?"

Coronavirus | How a longtime Catholic college president is navigating the pandemic

Saying goodbye to Cristo Rey and my year of service

Life in community supports finding your best self

From Zimbabwe to the Presentation Sisters