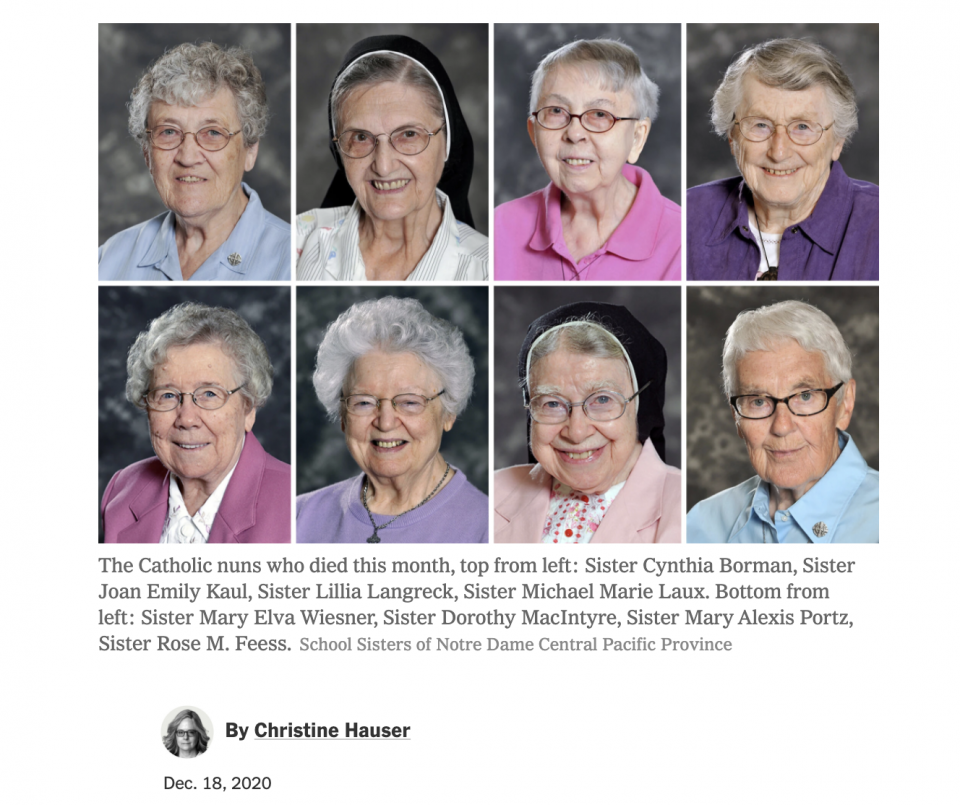 The New York Times published a story Dec. 18 about the eight sisters who died in December from COVID-19. (GSR screenshot)

Four women religious died on the same day, adding to the sum of eight nuns who succumbed in a little more than a week in mid-December in Wisconsin after complications from COVID-19 as the virus spread in the facility that cared for them.

Group settings that care for the elderly, such as Notre Dame of Elm Grove in suburban Milwaukee where the women lived, have caused alarm during the age of COVID-19. Many communities of men and women religious, particularly those that have members in their 80s and 90s and beyond, have opted for limited contact with the public.

But as the cases in Wisconsin show, even with precautions, the virus can seep in, leaving devastation behind.

The New York Times on Dec. 18 wrote about the sisters, who were "educators, music teachers and community activists who served tirelessly for those living in poverty." Read the story.

The School Sisters of Notre Dame Central Pacific Province, based in St. Louis, cares for the nuns who live in the facility, and though they had largely been able to keep the virus away since the pandemic began in earnest in mid-March, they learned of a positive case within the community around Thanksgiving, according to news reports.

The first death reportedly happened Dec. 9, but the deadliest date came Dec. 14, when four nuns died. Many of them had been teachers.

"All CDC guidelines are being followed regarding the care of sisters affected by COVID-19 and to avoid spread of the virus, including wearing masks, social distancing and hand-washing," the province said a statement after news of the sisters' deaths. "Our thoughts and prayers are with the sisters, their caregivers and families. We invite you to join us in prayer for all those affected by the pandemic."

Sr. Debra Marie Sciano, provincial for her congregation's province that runs the facility, told the Associated Press that there are other cases but did not elaborate, except to say that those who have tested positive are kept in a designated area.

A photo from AP shows a sign outside the Notre Dame of Elm Grove facility that warns others not to trespass onto the campus — "no walking, no bicycling, no drivers" — because of the virus. "May all stay safe and well," the sign says.

Vaccines against the virus have started to be administered among communities of vulnerable adults in the U.S., including nursing homes and long-term care facilities such as Elm Grove.

Notre Dame of Elm Grove was once an orphanage but in modern times transitioned to a facility for elderly and women religious who needed care.

Read this next: 'Our most tragic time': Felician Sisters bear loss of 13 sisters to COVID-19