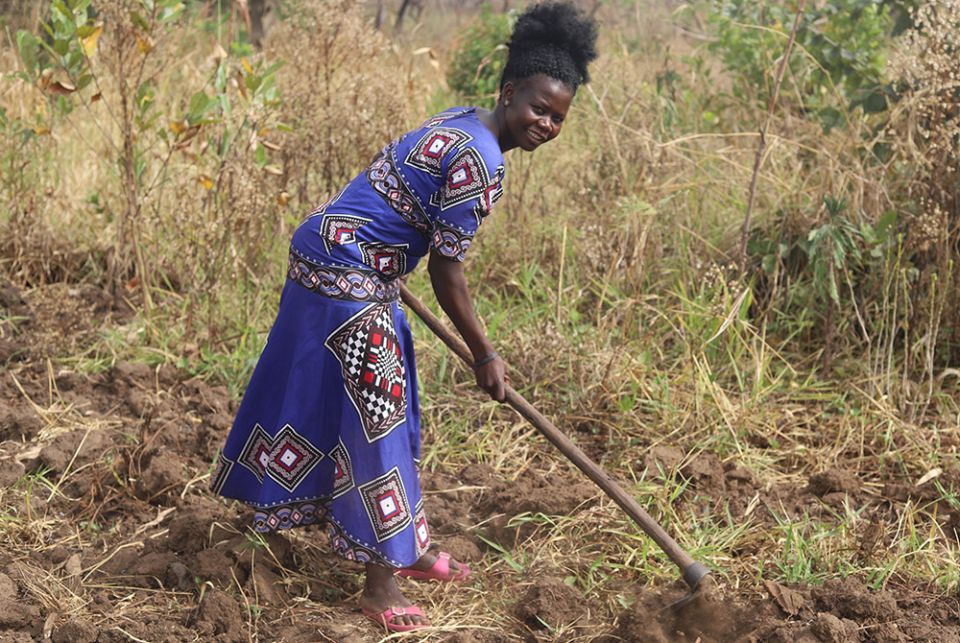 Rose Geno, 30, tills her land in preparation for the next planting season, which began in March. With the skills and support she received from Sr. Lucy Akera and Salesian missionaries, she hopes to increase her harvest. Geno started farming to mitigate food shortages at the Palabek refugee camp in northern Uganda, amid the pandemic. (GSR photo/Doreen Ajiambo)

Palabek Refugee Camp, Uganda — It is just after midday and the sun is high up in the sky above this dusty, sprawling settlement of 55,574 people in northern Uganda. Rose Geno with her three children sit inside their grass-roofed mud hut to escape the scorching heat as she prepares a meal of corn and beans.

The 30-year-old South Sudanese refugee said her school-age kids now eat smaller meals more often after she managed to harvest enough crops during the previous season (June-November). She is among thousands of refugees who have received seeds and farming support from the Salesian missionaries and a nun to help mitigate food shortages amid the COVID-19 pandemic.

"My life became unbearable when the pandemic hit us," she said. A lack of funding from international bodies reduced food rations at the camp. "We slept hungry many times because the ratio was cut by 40% at first and it was later reduced to 20%," she said.

Geno fled from Pajok, a town in South Sudan located 10 miles from the border with Uganda, in April 2017 after fighting intensified between government forces of President Salva Kiir, and forces loyal to the former vice president, Riek Machar. She escaped with her children after her husband was killed by soldiers, walking for three days in the bush before reaching Palabek. 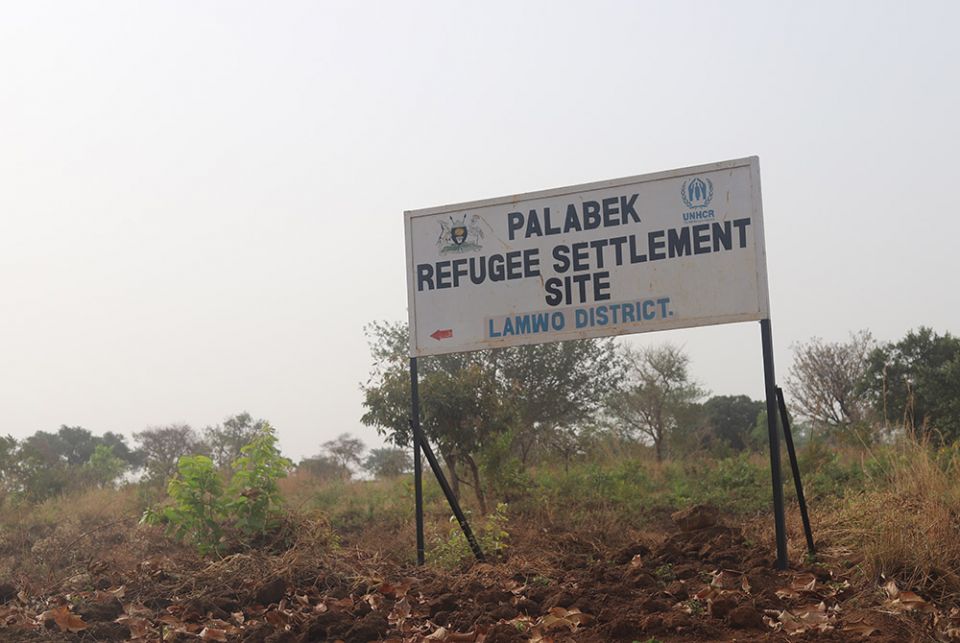 A signpost for Palabek refugee camp in northern Uganda. The camp is a home to more than 50,000 refugees from neighboring South Sudan, a country that descended into civil war in 2014 just a few years after independence. (GSR photo/Doreen Ajiambo)

She says the coronavirus and the resulting ration cuts and food shortages threatened their lives more than the civil war in her young country in which more than 380,000 people have been killed and nearly four million people displaced.

"We nearly died from hunger during the peak of the pandemic but thanks to the priests and a nun who came to our rescue in our time of need," she said.

Sr. Lucy Akera of the Little Sisters of Mary Immaculate of Gulu said they had to act quickly to save the lives of refugees. "We distributed the little food we had in our store to refugees and we quickly realized we had to look for a long-lasting solution to hunger, which was farming," she said. 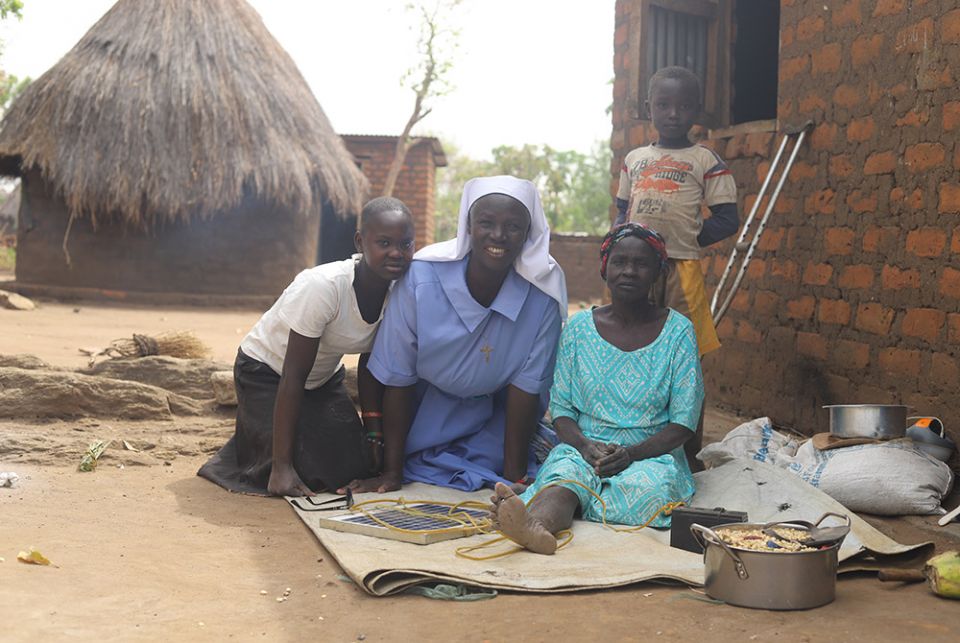 Over 1.4 million refugees in more than 14 refugee camps across Uganda bore the brunt of the pandemic after the East African country registered its first case of COVID-19 a year ago.

"When the pandemic hit the world, it came to us as a shock.We were not prepared at all. Everything was closed down and refugees were left for dead," said Arasu, who is among the five Salesian missionaries living and working in the Palabek refugee camp. "We were forced to share our little food and other essential goods with the refugees to keep them alive amid the pandemic."

However, Akera had a different way of tackling food shortages in the camp. With the help of the Salesian missionaries, she began providing training, tools and seeds for refugees to plant and harvest crops to support their families in the midst of the pandemic.

She and the Salesian missionaries distributed fertilizers and several hundred kilos (thousands of pounds) of beans, maize, soya beans, simsim or sesame, groundnuts and many assorted vegetable seeds such as collard greens. They also distributed tons of cassava cuttings. 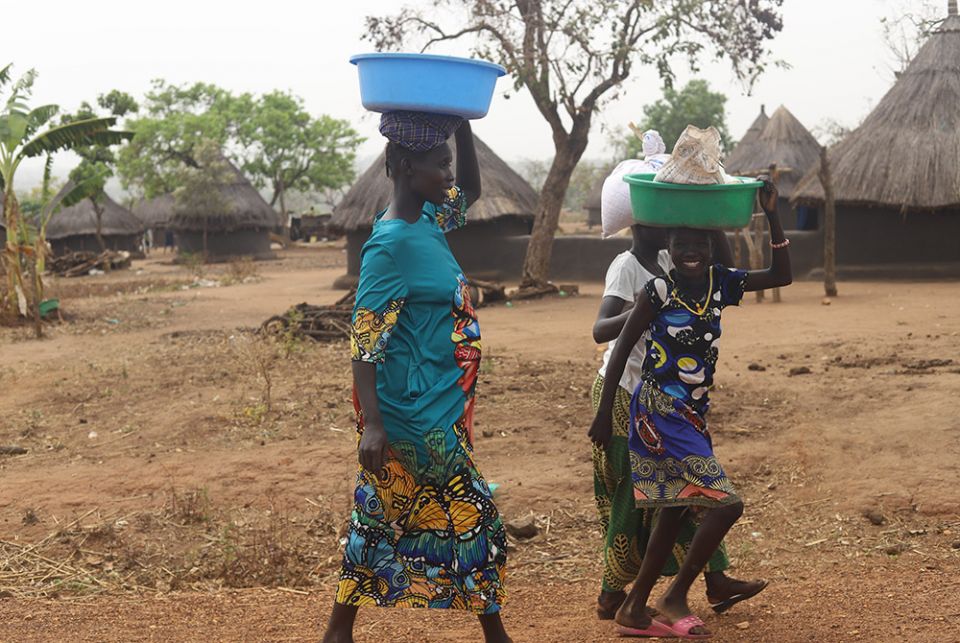 Young refugee women carry corn flour on their heads at the Palabek refugee camp in northern Uganda. Many refugees produced enough corns and beans to feed their family amid the COVID-19 pandemic after receiving seeds and farming support to help mitigate food shortages. (GSR photo/Doreen Ajiambo)

"The only way we could tackle hunger during the pandemic was through farming. So we had to train and support refugees with seeds and fertilizers to plant and harvest enough crops to feed their family," said Akera, the only nun working at the Palabek camp. She lives in a small mud hut built of sticks, mud and metal scrap. "I also did farming and I planted groundnuts, soya beans and maize. I have enough food which I share some with my neighbors who are refugees."

Akera, who grew up in a farming family, has been able to transfer her agricultural skills to the refugees. The 58-year-old nun, who comes from Gulu town, 60 miles away from Palabek, said her calling to serve led her to work in the camp despite the hardships, though she sometimes feels lonely.

"I feel happy being in the camp though I'm lonely. No sister wants to come and live in this hardship area," said Akera, whose congregation is in Gulu. "I was born and raised in a rural area so living in the camp for me is a normal thing." 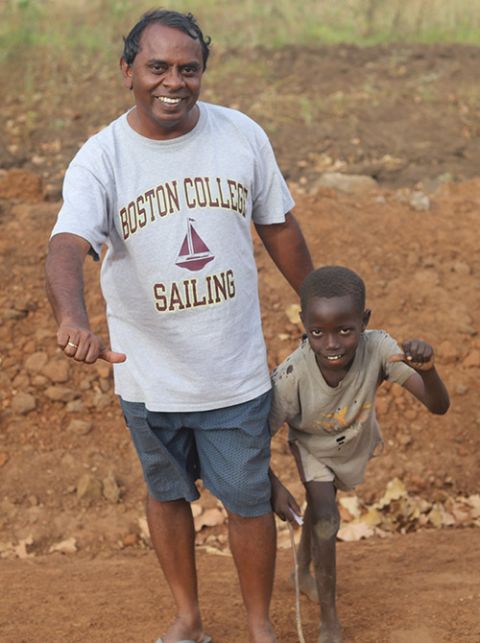 The East African country of more than 44 million is celebrated around the world for providing refugees with the land for shelter and agricultural use. Arasu said his congregation has been renting land from the local Ugandans for refugees who don't have enough land for farming to help them grow enough crops to feed their families.

"I rented some farms from the hosting community. The money I used was provided by the Don Bosco missions and since children were home, they helped their parents in farming," he said. "God was also faithful; it rained a lot and since the land was virgin land, it produced really well."

Akera came to the camp in 2018 after the Salesian missionaries requested the Archdiocese of Gulu to ask sisters to come and help serve the people in the camp. Before the pandemic, she tried to provide hope and solidarity to refugees while helping to distribute aid. But she now has a new ministry amid the pandemic: sensitizing refugees on the importance of farming.

"My new ministry is to ensure refugees support themselves through farming because COVID-19 has taught us the biggest lesson of not relying completely on food aid distributions," she said. "We want to keep on training them on how to plant crops and ensure they have enough harvest." She began training refugees on farming in May 2020 after the pandemic reduced food rations for refugees.

Every morning, Akera visits various villages within the camp to train and emphasize to refugees the importance of farming. She recently demonstrated to a group of farmers how to plan their farms from the beginning of the season up to harvest without encountering any problems. 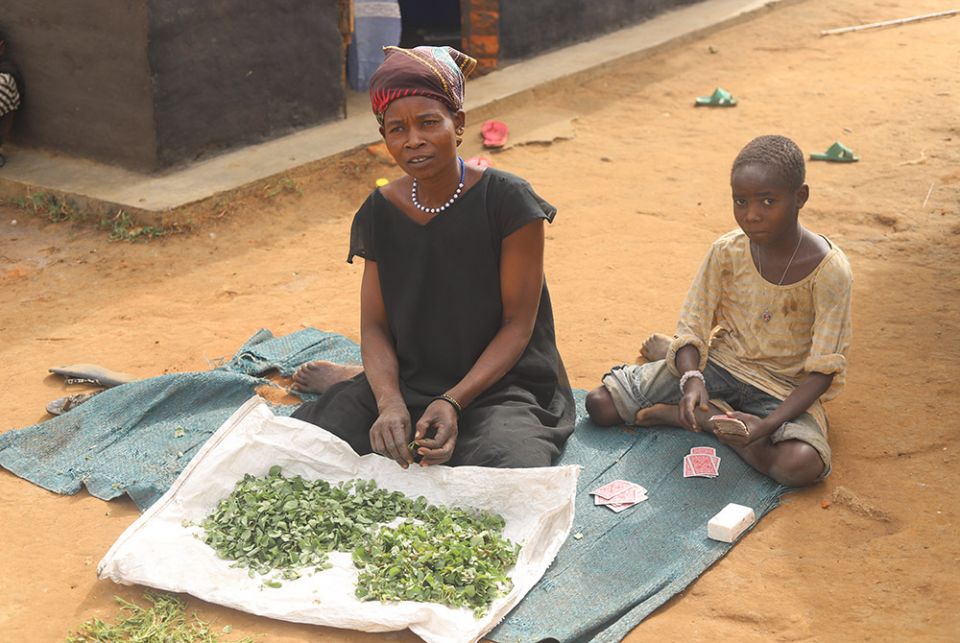 A woman with her child sits on the ground as they prepare vegetables to cook for lunch at Palabek camp Feb. 20 in northern Uganda. (GSR photo/Doreen Ajiambo)

During one of the meetings, she told dozens of refugees who were busy tilling their lands in preparation for the next planting season to follow new methods of farming and plant hybrid maize seed varieties to produce enough food to feed their families.

"I urge the refugees to curb hunger by following modern ways of farming and embrace hybrid seeds to harvest more yields," she said.

Akera, whose congregation's charism is to serve the most vulnerable, said her trainings and activities have proved to be effective as most refugees now own small "kitchen gardens" around their huts to make sure their kids have enough nutritious food to eat. The kitchen gardens were started around May and June. Some produced more than enough food last season to feed their families after the pandemic hit, she said. 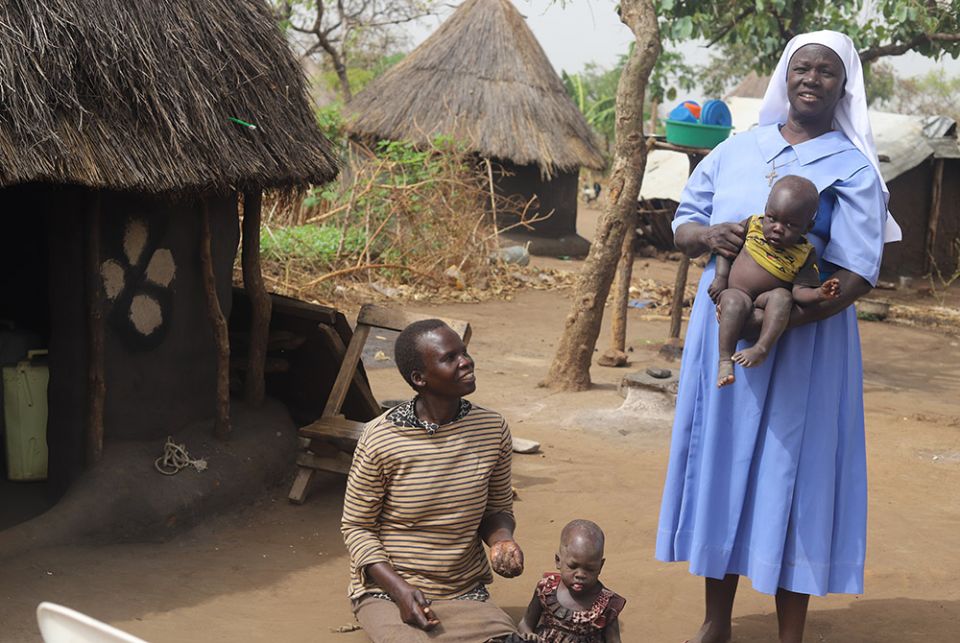 Sr. Lucy Akera of the Little Sisters of Mary Immaculate of Gulu visits one of the families that benefited from her agricultural skills and support, and started farming to mitigate food shortage at the Palabek refugee camp in northern Uganda amid the pandemic. (GSR photo/Doreen Ajiambo)

Mary Lamaro, 35, is one of the beneficiaries. She fled South Sudan in 2017 with her five children after her husband was killed by rebel soldiers in Pajok town.

Lamaro had no job and depended exclusively on support from humanitarian organizations to care for her children. However, when COVID-19 hit, food aid and other support was cut due to movement restrictions and funding issues.

"Life was not that hard here when I came, we used to receive aid from different organizations," she said. "But when the pandemic hit us, most of these organizations left and feeding five children became a nightmare. I didn't have food to feed my children and they would go to bed hungry."

However, Lamaro has been able to learn agricultural skills through the help of the sister and the Salesian missionaries. She's been able to produce enough corns and beans to feed her family and grow crops like collard greens, onions and tomatoes.

"I'm happy because I have enough food to feed my children and even sell some produce to cater for other basic necessities," she said, thanking Akera and Arasu for offering her training and providing seeds. "I also have a small kitchen garden where I'm able to plant vegetables. I do hand irrigation because it is a dry season here. The vegetables I harvest help me with feeding my children and I also share with my neighbors who don't have them."

Archbishop John Baptist Odama of Gulu said the diocese will fully support the work of the sister and the Salesian missionaries by supplying cassava cuttings and seeds of maize, beans, sunflower and groundnuts in the next planting season. However, Odama urged humanitarian organizations to continue helping refugees to save the lives and protect the vulnerable.

"We are trying to help refugees as much as we can because it's our responsibility as a church to serve God and humanity, and that's what the priests and the sister are doing in Palabek," he said, noting that the camp is within the Gulu Archdiocese. "However, we still appeal to local and international donors to continue supporting refugees especially during this COVID-19 period."

Meanwhile, Geno was tilling her land in preparation for the planting season that began in March. With the skills she obtained from the sister, she is hoping to increase her harvest even more, and put the profits of her harvest towards educating her children.

"I don't want to rely on food aid anymore," she said. "I want to plant and produce enough food for my family and sell some of the surplus for other household expenses and for educating my children."