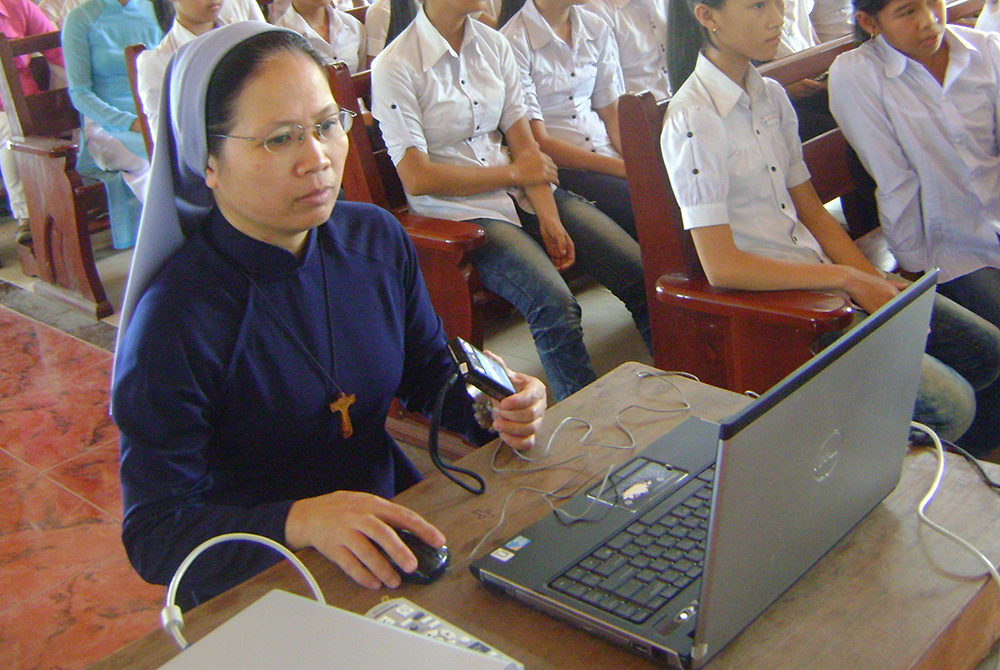 St. Paul de Chartres Sr. Josephine Huynh Thi Ly has kept her cellphone with her around the clock since strict social distancing was imposed in Thua Thien Hue province in August.

Ly, a doctor, is on call at all times for her 120 HIV/AIDS patients at Hue Central Hospital. The patients have been only allowed to receive their antiretroviral medication once per month at the hospital to keep clear of being infected with COVID-19. Before the pandemic, they received their medication on Wednesdays and Saturdays.

"I daily receive dozens of calls from patients who tell me about their health hazards, financial situations, unemployment and lack of food and beg for help," she said. She prioritizes help to people running short of food and has offered 30 people at least 1 million dong ($44) each, courtesy of benefactors.

As the delta variant spreads in Vietnam, sisters like Ly in heavily affected areas have moved some of their ministries online or now run them over the phone to prevent the spread of the coronavirus.

Ly's Thua Thien Hue province imposed preventative measures against the delta variant outbreak in May. The province, which quarantined some 10,000 migrant workers who had returned home over the summer to avoid the coronavirus in Ho Chi Minh City and southern provinces affected by COVID-19, has recorded 784 infections and 11 deaths as of Sept. 15. Vietnam, which has a population of 103 million, recorded 645,640 cases of COVID-19 and 16,186 deaths as of Sept. 15. 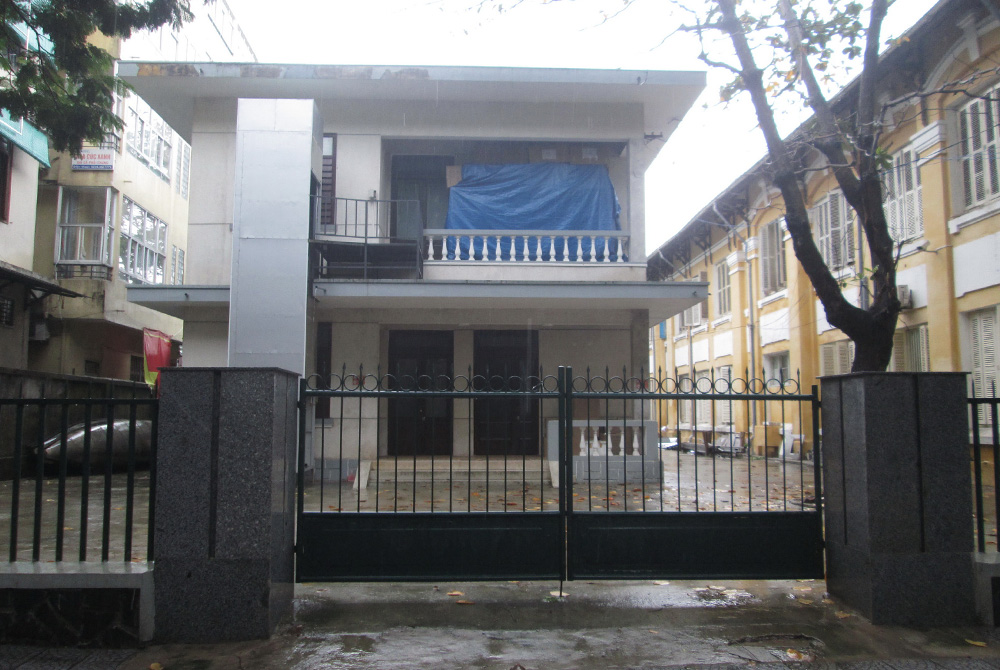 The infectious ward of Hue Central Hospital is closed because of the COVID-19 pandemic. (Joachim Pham)

Ly, who normally takes daily care of patients with tuberculosis and HIV/AIDS at the hospital, said working over the phone helps save patients travel time and limits the spread of the coronavirus. She often has to call them many times to take in their situations to reduce their phone bills.

"Some call me at dawn, at noon and even at midnight while I am praying and sleeping when they have side effects, suffer shock, need emergency medical care and hospitalization, and their relatives are dying," she said. She said the long calls give her headaches, earaches and weariness.

Ly, who started to work at the hospital in 1998, also uses online services to teach patients how to use medicine, look after their health, keep personal hygiene, and clean their homes.

Nguyen Thi Thu, a 43-year-old HIV patient from Phu Vang district who asked Global Sisters Report not to use her real name because of the stigma of HIV, has been unemployed since the hotel where she did the laundry closed in April because of the pandemic. She said the hotel owner, who now sells food for a living, still owes her 10 million dong for her work before the hotel closed. 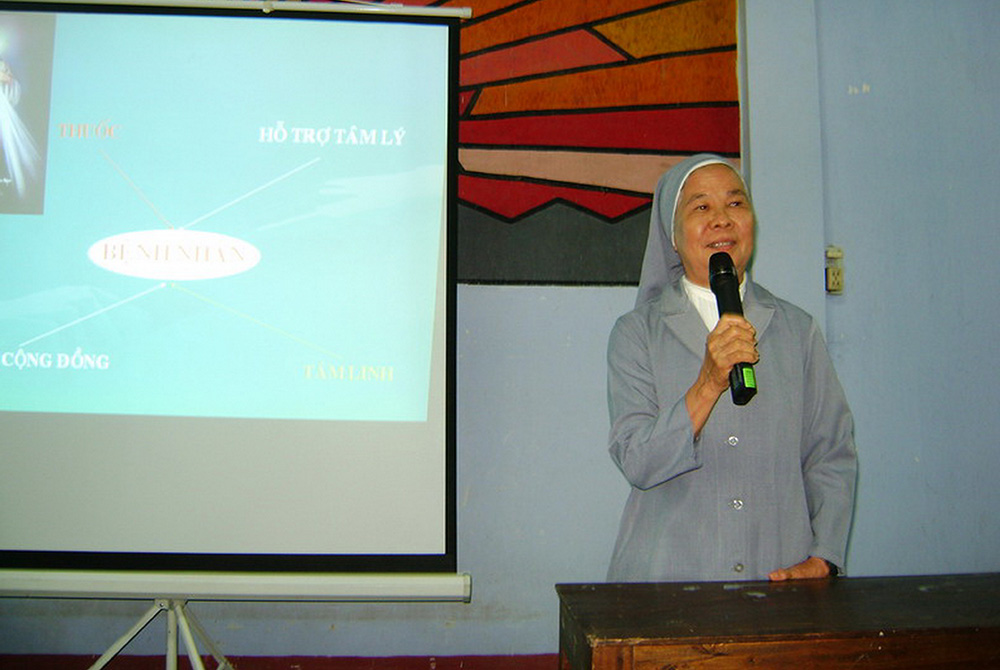 She and her only child, who also has HIV, spent weeks eating only instant noodles and rice because they had no money for other food.

Thu decided to call Ly for help Aug. 19, and the nun asked a local volunteer to come to Thu's aid.

"We were given 1 million dong, 2 kilograms of pork and 10 eggs. We also got other food later," Thu said. "We are really grateful to her."

Thu said at first, she was reluctant to ask the nun for help by phone; usually, she meets Ly in person at the hospital, tells her about her problems and asks for help.

Hue Lovers of the Holy Cross Sr. Mary Le Thi Men said because of the pandemic, some sisters cannot go out to minister in person with pregnant women who have been abandoned by their boyfriends, so they keep in contact with them by phone. They offer advice to 27 women ages 16 to 20 and through volunteers give them money, food and clothes.

The nuns provide the pregnant women, who are from poor families and have no jobs, with basic needs until they give birth to their children and later provide them with vocational training. Some of the women live with their families while others stay in rented houses for fear of being mocked by others.

The 58-year-old Men said she sometimes misses community meals because of answering calls.

"We are elated by the fact that many are set to tell us about what they face, and we try to listen to their emotions and comfort them," she said. Many call to ask the nuns to pray for them to overcome their depression.

Sr. Teresa Truong Thi Thao Nhi, a member of the Daughters of Mary Immaculate, said she and her sisters suspended all in-person pastoral services in August because of the outbreak.

Nhi, who works with local Catholic students and youth in Hue, now gives an online marriage preparation course to 12 couples who use computers or smartphones to attend.

The nun said she teaches each couple at different times, as they were not all available at the same time. Many live in remote areas where internet and mobile signals have poor quality. 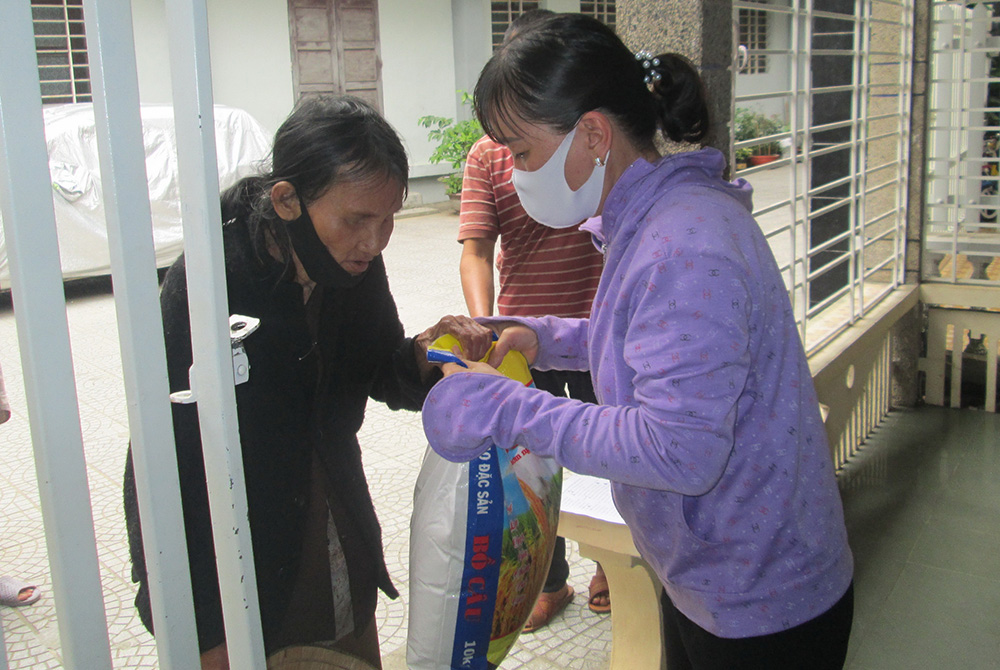 A Catholic volunteer gives aid to the mother of a pregnant woman Sept. 5 in the Huong Tra district of Thua Thie Hue province. (Peter Nguyen)

Nhi was particularly impressed by one student, Tran Thi Thanh Ha, a Protestant who admired the Catholic nuns for voluntarily giving food to people in quarantine in early August. Although she had previously refused to convert to Catholicism, the nuns' ministry inspired her to convert to marry her boyfriend, a Catholic, at the end of this year. The couple now attends Nhi's marriage-preparation course in the evenings.

Other groups of religious have joined together to offer a listening ear over the phone to anyone who needs the help.

On Sept. 12, five sisters and three priests in the Hue Archdiocese began to minister over the phone to those faced with spiritual and psychological problems. The group takes calls from 7:30 a.m. to 8:30 p.m. each day, listening to, empathizing with and praying for those who need their help regardless of their background. 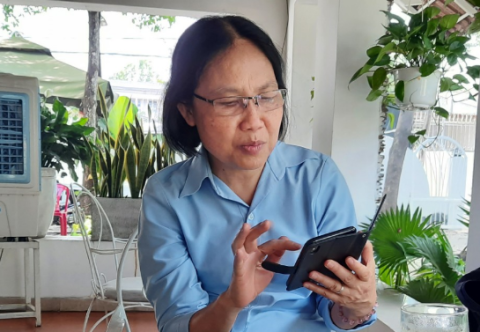 Sr. Anna Pauline Ngo Thy Ngo from the Dominican Sisters of St. Catherine of Siena, who is based in Bien Hoa, is among 22 priests, religious and doctors in the Xuan Loc Diocese who provide medical and emotional advice to COVID-19 patients in hospitals and quarantined places in Dong Nai province and Ho Chi Minh City, the country's COVID-19 epicenters.

Ngo, a doctor at Thong Nhat General Hospital, said members of the group, formed in early August, are available from 6 a.m. to 9 p.m., serving people in need over the phone. Ngo is on duty from 11 a.m. to 4 p.m. every day, but she said she also receives calls from people at night who are worried about infection or want to know how to deal with their relatives who have side effects caused by vaccination.

"We are ready to serve those who need our help at any time," Ngo said. "We are ecstatic to ease their stress and worries and help them to find peace during the pandemic."

[Joachim Pham has been a National Catholic Reporter correspondent since December 2013 and regularly contributes to Global Sisters Report. He is based in Vietnam.]