Court grants bail to sick Indian nun; still no charges against her 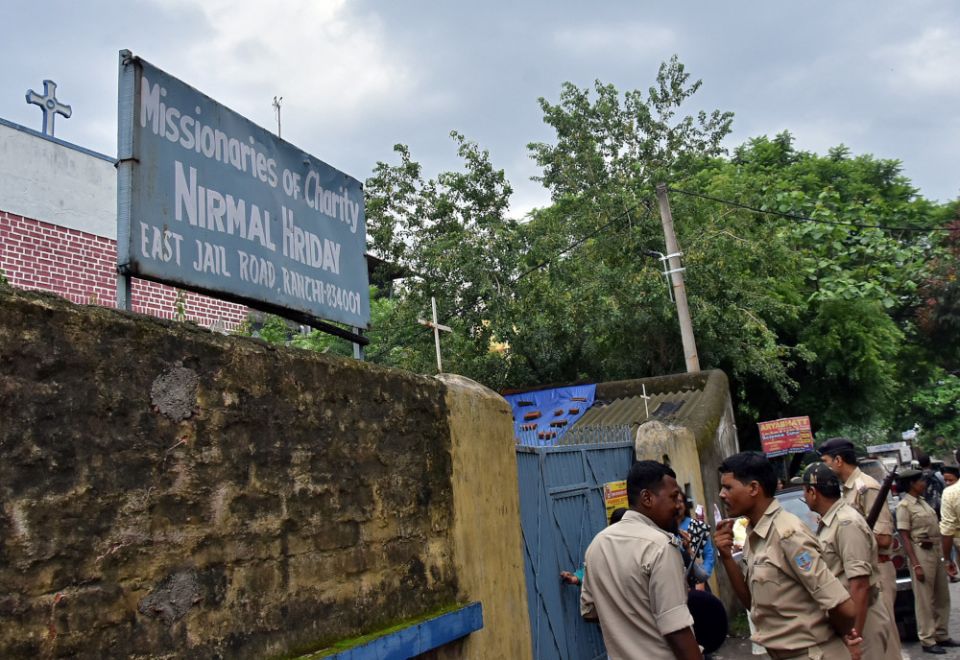 Indian police stand outside the premises of the Missionaries of Charity home in Ranchi, where Sr. Concelia Baxla, 62, was arrested July 5, 2018, on suspicion of child trafficking. The High Court of Jharkhand state in eastern India has granted provisional bail to Baxla, who has never been formally charged. (CNS/Reuters)

Bhopal, India — The High Court of Jharkhand state granted provisional bail to a Missionaries of Charity nun jailed on allegations of child trafficking 15 months ago. The nun, who is sick, has never been charged, reported ucanews.com.

In July 2018 police arrested Sr. Concelia Baxla, 62, who managed a shelter home under the Missionaries of Charity congregation, following an allegation that she sold a baby born to an unwed mother under her care.

The court in the state capital, Ranchi, provisionally released her Sept. 27 on furnishing a bail bond of 10,000 rupees (US$150). The court directed her to deposit her passport and not to change her residence in Ranchi without permission of the court. Her case has been listed to be heard in four months.

The nun's counsel argued that Sister Baxla should get bail as there were no direct charges against her. She had been in jail since her arrest July 4, 2018.

"We are happy that the nun is back home after being in jail," said Jesuit Fr. Xavier Soreng, a social worker. "It is indeed happy news" because the High Court and Supreme Court had earlier denied her bail, he told ucanews.com.

Auxiliary Bishop Theodore Mascarenhas of Ranchi told ucanews.com the church is "proud of all our Mother Teresa sisters, who went through this ordeal with courage, patience and prayerful fortitude."

Following the nun's arrest, the state and federal governments initiated a series of investigations into Missionaries of Charity homes.

On Oct. 30, 2018, a court refused bail for Baxla on the grounds that the investigation into the activities of the congregation could be hampered if she was released.

On Jan. 29, the Supreme Court turned down her bail application on grounds that police had not yet pressed charges in the case.

On July 16, the federal Ministry of Women and Child Development ordered inspections of all child care homes run by the congregation across India. A separate probe also was ordered into foreign donations Missionaries of Charity has received.

Trafficking | Court grants bail to sick Indian nun; still no charges against her

Q & A with Sr. Imelda Poole, networking with European religious against trafficking