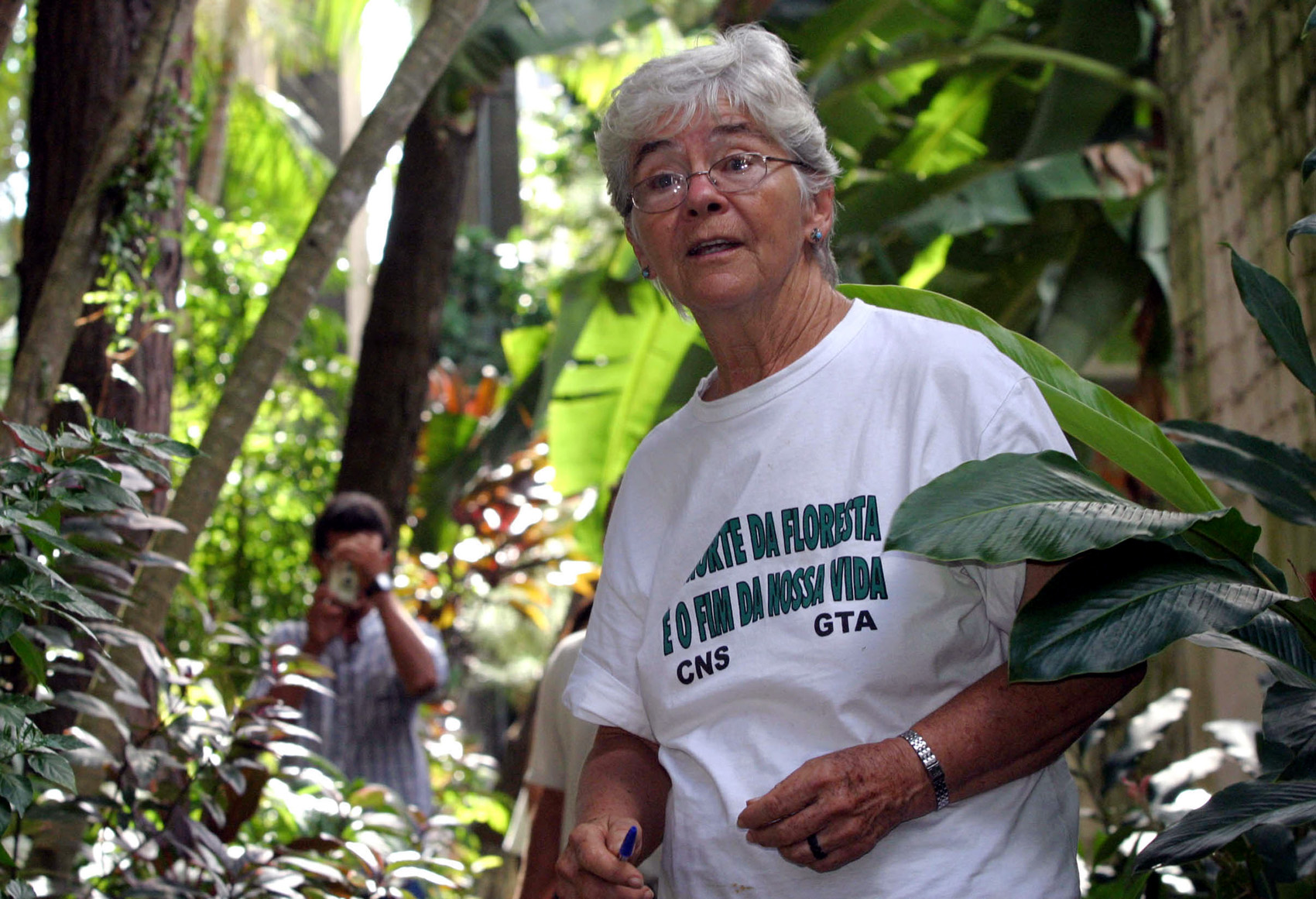 U.S.-born Sister Dorothy Stang, a member of the Sisters of Notre Dame de Namur, is pictured in a 2004 file photo in Belem, northern Brazil. The nun was 73 when she was murdered Feb. 12, 2005, on an isolated road near the Brazilian town of Anapu. She had lived in the country for nearly four decades and was known as a fierce defender of a sustainable development project for the Amazon forest. (CNS/Reuters) 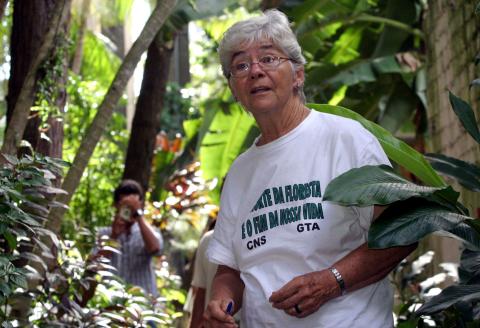 U.S.-born Sister Dorothy Stang, a member of the Sisters of Notre Dame de Namur, is pictured in a 2004 file photo in Belem, northern Brazil. The nun was 73 when she was murdered Feb. 12, 2005, on an isolated road near the Brazilian town of Anapu. She had lived in the country for nearly four decades and was known as a fierce defender of a sustainable development project for the Amazon forest. (CNS/Reuters)

Feb. 12 was the 15th anniversary of Sr. Dorothy Stang's assassination in the Amazon region of Brazil. The U.S.-born nun is remembered as a crusader for the poor and the landless and for her love of the land and the Amazon forest.

"She taught me how to be a missionary in Brazil; she was my mentor," Sr. Rebeca Spires told Catholic News Service. Spires, who, like Stang, is a member of the Sisters of Notre Dame of Namur, said the first thing Stang gave her was Brazil's land statute.

"She was all about doing things within the law," said Spires.

The two nuns worked first in the state of Maranhao, before heading north to the Amazon region. Calling her colleague "very determined," Spires said Stang quickly learned all there was to know about the forest. "She knew everything about the region.

"She welcomed migrants, taught them how to read, taught them about the laws, their rights and responsibilities," Spires said.

She said that, in the early 2000s, Stang started to pressure public officials to combat land invasions by ranchers and large landowners, who wanted to take away areas occupied by smaller farms. The officials "became extremely irritated with her, with her persistence," Spires said.

"Although threatened with death, Dorothy never failed in her life's mission, to fight for the poor of the land, so that they had their rights guaranteed and a dignified life," read the statement issued by the Brazilian bishops' Pastoral Land Commission Feb. 12 to mark Stang's death.

Mary Cohen, a lawyer in Belem and a member of the Brazilian bishops' justice and peace commission, was president of the human rights commission at Brazil's lawyer association when Stang was in Anapu.

"She once slept on the steps of the INCRA (Institute for Agrarian Reform) so they would talk to her. She had a lot of determination, and that invigorated all of us," said the lawyer.

That determination made many people in the region angry. Trying to reduce the tension between landowners and peasants and their advocates, the lawyer's association gave Stang a human rights award two months before she was killed.

"We thought that more media attention and recognition of her work would keep her safe, that they (landowners and ranchers) would be deterred. We were wrong," said the lawyer.

And although Stang's assassination made international headlines and caused worldwide commotion, those who continue her work say the threats today to the landless and their advocates are even greater.

"There are still a lot of people being threatened, and I wouldn't want to jeopardize anyone's life," Sr. Jane Dwyer, a member of the Sisters of Notre Dame of Namur who worked closely with the murdered nun, told CNS.

Dwyer, who still lives in Anapu, told CNS she was uneasy about giving interviews over the telephone. She said that, since 2015, 19 landless, small-scale farmers had been assassinated over land conflicts in the area. "Nineteen in the last five years," she said.

"Of the 19 assassinations, in only one did authorities bring someone to justice," added Spires, who works with the Brazilian bishops' Indigenous Missionary Council in Belem.

Cohen said those who speak out today against the rich and powerful in the region continue to be threatened.

"Her successor, Father Amaro (Jose Amaro Lopes de Souza), continues to be threatened, and when they were unable to scare him off, they accused him of extortion and inciting violence among landless peasants," she said.

But what most people remember about Stang is her "love for the people of the Amazon, for the forest," said Spires. "She was an example of that her entire life."

"She used to say: You don't need to cut down the forest to obtain your livelihood from it," recalled Sr. Margarida Pantoja da Silva, missionary of the St. Terezinha congregation, a group created by religious sisters in the Amazon region.

What Stang left as a legacy for those in the Amazon, said da Silva, is "dignity, justice, recognition of social, political and civil rights, a lot of courage to remain fighting, and a great spirituality, a devoutness to the earth."

"Without devoutness to the earth, to the land, they (peasants) would not have the strength to continue fighting," she said.

"The synod document is titled 'Querida Amazonia' (Beloved Amazonia), which ... embodies what Sister Dorothy spoke of her entire life: 'Dear Amazon, we are here to defend you, to protect you. Dear people of the Amazon, we are here to help you in your fight, in your resistance, in the recognition of your rights.'"