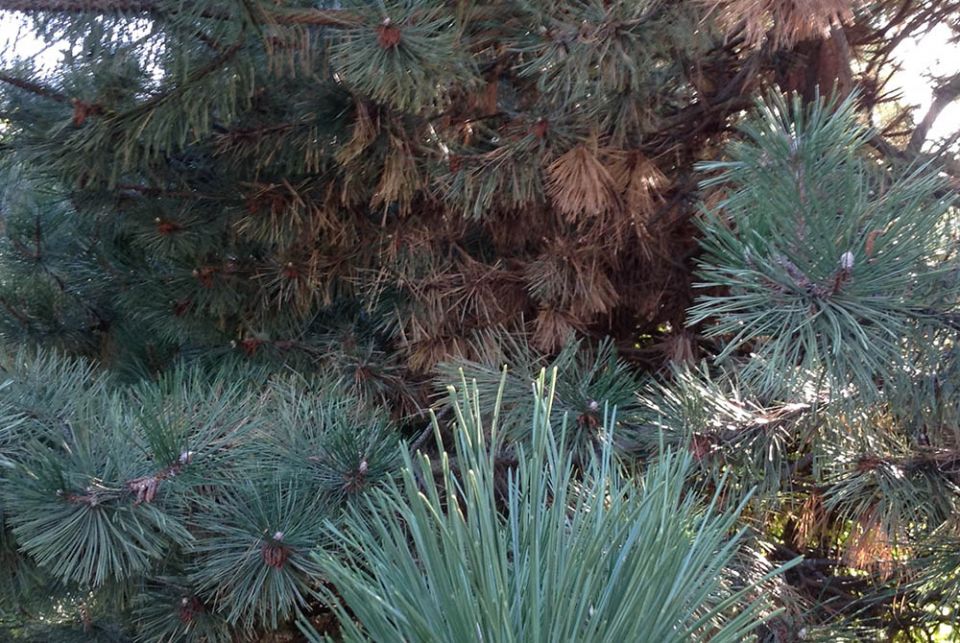 Pictured is the first sign that the Austrian pines along the back of the lot were diseased and would have to be cut down. (Provided photo)

When we first moved in, we discovered a pleasant surprise. Along the back of the lot were Austrian pines. They were about 2 feet high and a little scrawny, but looked cute in the space. The following year the landlady dug out some of them to give the others more space. None of us were sure the trees would survive as, by her own admission, the "thinning out" proved to be very disruptive. They not only survived, they thrived.

Austrian pines have giant 6-inch needles that reach out to stick you when you get too close, and they also produce numerous and beautiful pinecones. The trees quickly grew into a wonderful windbreak and privacy hedge for each of the four lots that met at the fence line, climbing to nearly 20 feet tall. Birds, squirrels and a possum took up residency deep within the pines.

This year the pines looked a little sad. Needles dropped more than usual and new growth was slow. Something was clearly wrong. A visit from an arborist brought bad news: the trees were dying. They had lived twice as long as usual for this climate and would need to come down, or we would risk having them fall and do some real damage. 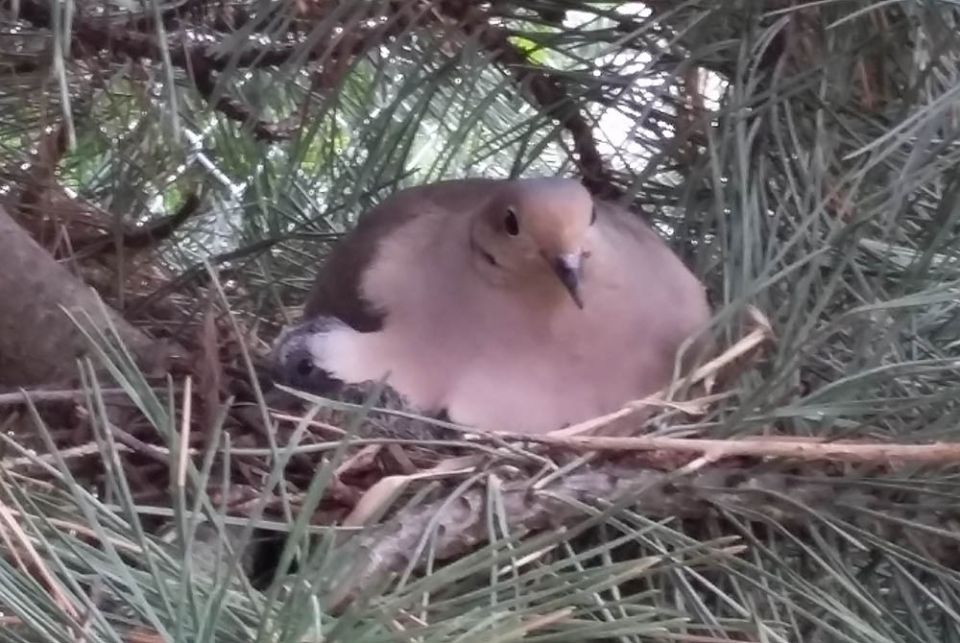 Doves build their nest in the Austrian pines. (Provided photo)

As silly as it sounds, the neighbors and I were heartbroken. We would not miss tripping over the pinecones or having them fly out from under lawnmowers. And our arms would be grateful for no longer being scratched bloody if we got too close. But we wondered where the wildlife would go? A few winters earlier, at the suggestion of the local weather reporters, I pushed old empty planters as close to the tree trunks as I could to hang as shelters, and those plastic baskets teemed with wildlife.

Every day I'd spent some time in the yard just looking at the trees, often with tears in my eyes. Because of an unusually stormy spring, the arborists were busy. They told us it would be late fall or early winter before the trees would come down. Coming home after work I went about my usual routine: putting the car in the garage, collecting the mail and putting my things in the house. After I changed clothes and went into the yard with the dog I stopped in my tracks — they were gone. 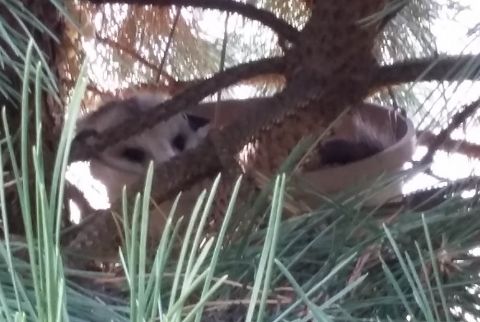 A possum seeks refuge in a pine tree. (Provided photo)

Weeks, if not months ahead of schedule, they took the trees. There was no phone call, no message, no note on the door, nothing. All that was left were stumps, cut very close to the ground. Those would be ground out later.

I spent time over the next several days standing where the trees once were. There were a handful of pinecones on the ground and the smell of freshly cut pine. That was it, no other evidence of the majestic trees. As the weather got cooler my attention once again returned to the wildlife that had wintered in those trees: This Franciscan had to do something.

A trellis partially wrapped in an old shower curtain liner offered a wind break, and the clear plastic made a little sauna-like area. I moved shepherd's hooks to the least windy places in the yard, and on them I hung baskets with makeshift tops to offer shelter. I replaced the bird feeder that had fallen into disrepair over the summer, and kept it filled. Climbing vines would wait until spring to be cut back, as their tangle of stems could also offer some protection from the elements. The trees were gone so I tried to offer alternatives, as winters here are often harsh. 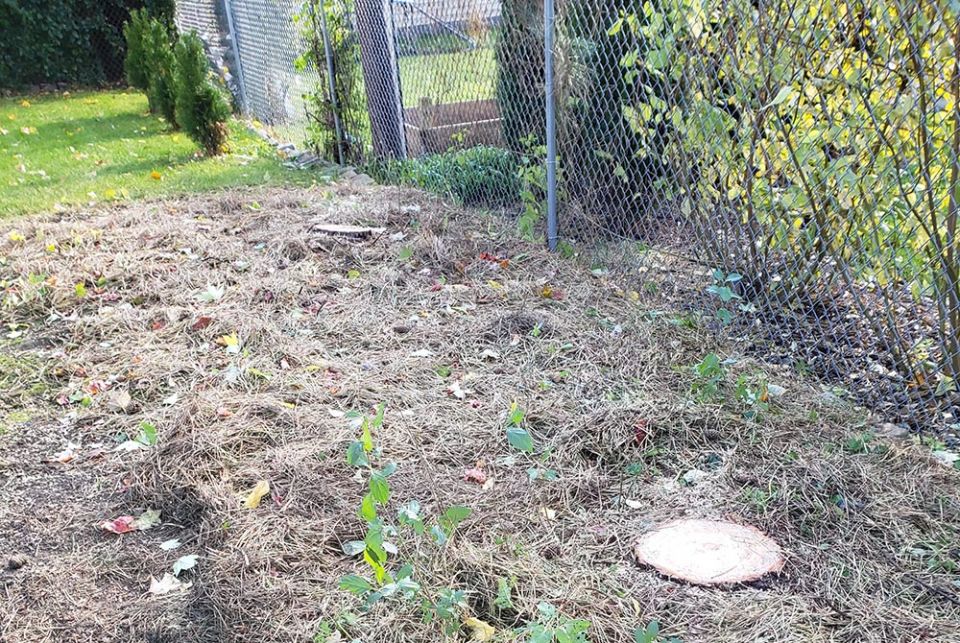 Stumps sawed close to the ground were all that remained of our pines. (Provided photo)

As I mourned the trees and worked at creating alternatives for the wildlife, it was Thanksgiving Drive time at school. Each homeroom was asked to provide a family meal box. The organization we worked with — Capuchin Community Services — made this super easy: the needed ingredients were listed right on the box. Each student need bring only one or two items and the box would be complete. I asked each student to participate as they were able. We filled two boxes the first day.

I sent a note of thanks to my students' families to let them know we had more than met the goal, and would be rewarded by a week's worth of "casual Friday" dress code (the ultimate motivation for high schoolers with a dress code). After receiving my note, the students, and a few parents, asked if they could do more. By the end of the week another box was started and they challenged each other to fill it. I upped the ante and told them if they could complete six boxes and everyone donated something, I would personally complete a seventh box. Challenge accepted and met. In two weeks' time we had gathered enough food to feed seven families.

Never had my homeroom participated like this. I was proud and also a little confused. Had the school stumbled onto the perfect outreach activity? Maybe. Did I happen to have a "go get 'em" group? Doubtful. Because 12 of the 18 students had been with me last year (we keep our homeroom students for their high school career, graduating some and adding some each year). It turns out my students were plotting.

One of the things I regularly do during homeroom is join a table of students to check in. The discussions are rarely profound, but it helps us create our own little community within the school. During one of those chats I shared I had spent the weekend working on creating spaces for wildlife because some trees were taken down where I live. I connected it to the upcoming Thanksgiving Drive, saying we would all be asked to "do something" for those who needed a little bit of help.

Word spread from table to table in my homeroom. Sister was trying to help out wildlife, let's show her what we can do for people that need a meal. So a month after two giant trees were cut down and I participated in a casual conversation about "what I did over the weekend," seven families — six more than expected — got boxes full of food.

Environment | Food for families: a gift from the trees

Islands of the Pacific are precarious but full of faith