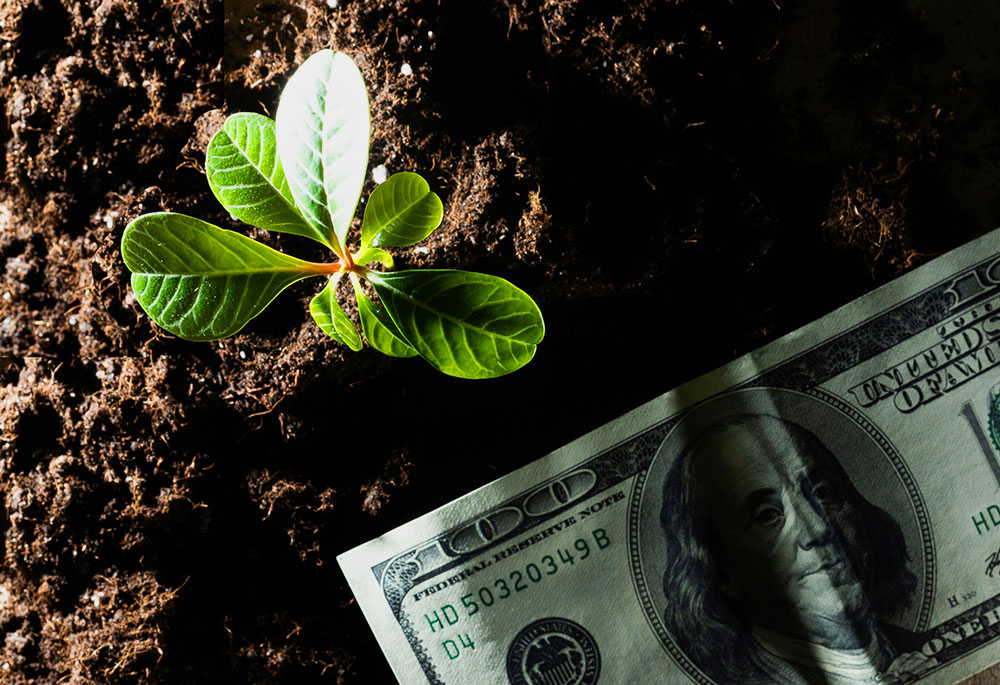 Many religious communities have long used their investment portfolios to address a variety of social and environmental issues. Now many are saying they can — and should — use that capital to specifically tackle climate change.

Sr. Patricia Daly, of the Dominican Sisters of Caldwell, said investment portfolios should be considered as part of the way the community lives out its charism, especially as the number of sisters declines and the proportion of sisters who are no longer in active ministry grows. And if investments are seen as part of a congregation's charism, then those investments should not only not harm the Earth and its climate, they should actively improve it, said Daly, a longtime leader in the field of socially responsible investing.

"We need to recognize our portfolio has a power beyond simply sustaining the congregation," Daly told attendees at the Resource Center for Religious Institutes at its annual conference, which ran Oct. 26-28. "The ministry of our portfolio has become profound."

And as scientists warn that climate change will create an environmental catastrophe, Daly said that ministry needs to address the manmade causes. Daly has been a leader in social impact investing for more than 40 years and is the corporate responsibility representative for her community and others.

Taking place just days before the start of the COP26 global climate change conference, several Resource Center for Religious Institutes workshops, including Daly's, looked at how the investments held by religious can address climate change.

But until recently, that wasn't easy. The experience recounted by Sr. Nancy Murphy in one workshop illustrated how persistence was needed by her congregation, the Daughters of Charity, to pursue a climate-conscious investment approach. She told a workshop that in 2015, after the United Nations released its Sustainable Development Goals and Pope Francis published "Laudato Si', on Care for Our Common Home," her congregation informed its investment adviser they wanted to eliminate fossil fuels from their portfolio.

The answer was essentially that it couldn't be done.

"When we looked at our portfolio, only about 6% was in fossil fuels and we tried to convince ourselves that's not so bad," said Murphy, the provincial councilor and a member of the congregation's investment committee. "But we kept hearing about other communities going to zero."

The barriers were many: Murphy said they were told removing companies in the fossil fuel sector would reduce the portfolio's diversity and make it more vulnerable to market swings, the process would be difficult and time consuming, divesting could hurt emerging markets in areas the sisters were trying to help, and it may not even result in any real change.

Then in 2018, the Vatican's Congregation for Institutes of Consecrated Life and Societies of Apostolic Life issued "Economy at the Service of the Charism and Mission."

"We were challenged to use our money and resources in a way that furthered our charism," Murphy said. "If that's not a call to action, I don't know what is."

'We need to recognize our portfolio has a power beyond simply sustaining the congregation.'

This time, their adviser, Ascension Investment Management, was open to the idea, but had many questions, such as whether "completely divesting" includes not just miners and drillers of fossil fuels, but major users, such as airlines; what kind of timeline they would consider; and what level of tolerance they would have, such as producers of products that are major consumers of fossil fuels, like automobiles.

The other problem was that Ascension, which only serves Catholic-based organizations, pools its investments among all its clients, meaning the Daughters of Charity portfolio would either have to be carved out at great cost, or all their clients would have to divest, as well. In addition, some of the investments were not in public equities such as stocks; they were in private assets that were under long-term contract and would be very costly to get out of.

But Ascension approached its other clients, and they were willing to make the change. In July, the company changed its investment policy and began divesting from fossil fuels. Murphy said the plan is that within three to five years the portfolio will be substantially free of fossil fuels, and the private assets in fossil fuels will be converted as they expire.

"What we were told couldn't be done was done," Murphy said. "If you get something from your current adviser or investment group that says absolutely not, we don't want to talk about it anymore, you've got to look somewhere else. You've got to talk to other people."

David Erickson, the chief investment officer at Ascension, said in the same workshop that much has changed from when the Daughters of Charity first started asking for divestment.

"The conversation is so different now than it was back then," he said. "The game is changing, the cost is falling, and the solution is the growth in other options."

Bryan Pini, president and chief investment officer of Mercy Investment Services, which handles only the investments of the Sisters of Mercy of the Americas and its ministries, said climate change is like having your house on fire while you stand in the driveway arguing about the best way to put the fire out.

"We all have to grab a bucket, grab a hose and start trying to do something," Pini said. And that is actually part of the solution — the problem is so large and complex, one method will not be enough. Divesting will have to be combined with investing in sustainable industries and re-investing in polluting industries when they transform to sustainable models.

That, said John Quigley at another workshop, is where the opportunity lies: While most people assume these types of portfolio changes will hurt performance, he believes you can fight climate change and outperform the market at the same time. Quigley is the chief investment officer of disciplined equity for Great Lakes Advisors. 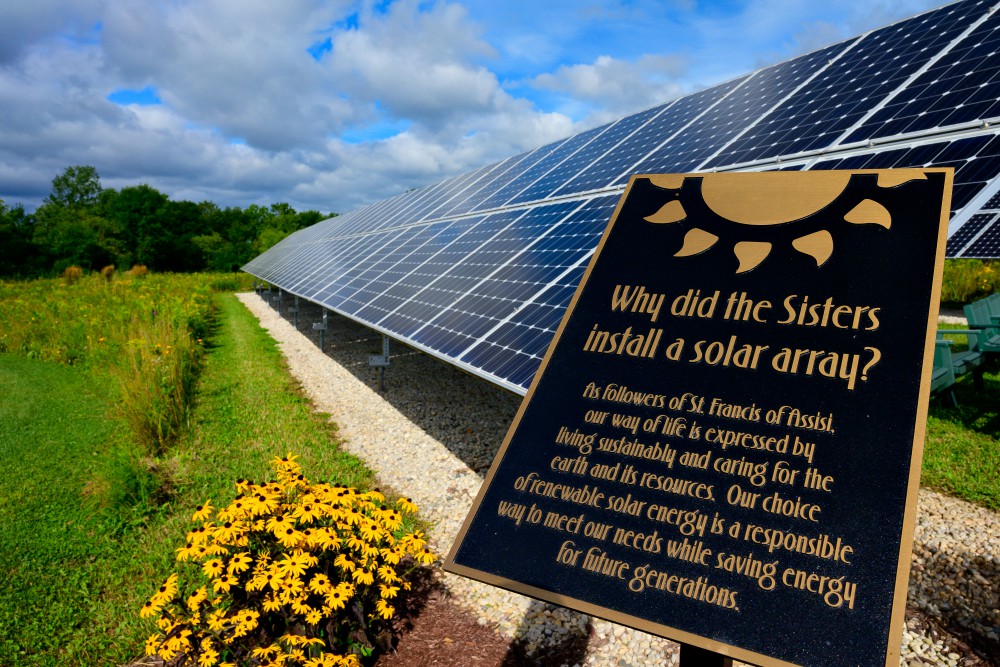 He said climate change promises massive disruption in every area of life, but great disruption means great opportunities for investors: Divesting from fossil fuels is a good start, but needs to be combined with investing in new technologies, new industries, old industries that transform, and carbon offsets. It means investing in companies such as Microsoft that have pledged to be carbon negative by 2030.

He said Great Lakes Advisors recently launched the first public investment product in the United States that is a carbon-neutral portfolio.

"As far as we know, it's the only such public equity portfolio available today," Quigley said.

Great Lakes Advisors handles the investments of the Benedictines of Rock Island, Illinois. Benedictine Sr. Susan Hutches said in the workshop with Quigley that creation was God's first gift to mankind — it shouldn't be the first gift to disappear.

Launching an investment product aimed at fighting climate change is something Daly is familiar with: She was one of the leaders of an effort by 16 Dominican congregations to partner with Morgan Stanley to establish a new investment fund aimed at financing solutions to address climate change and assisting communities worldwide most at risk. 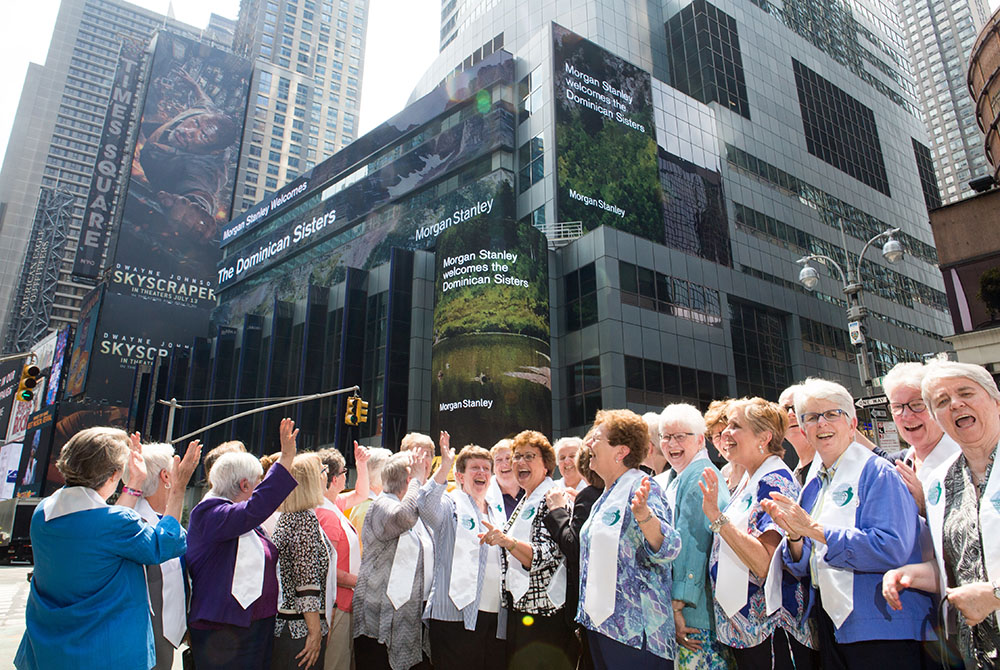 Leaders of 16 congregations of Dominican sisters visit Times Square and the Morgan Stanley headquarters in June 2018 to kick off the formation of their Climate Solutions Funds. (Photo courtesy of Morgan Stanley)

The five-year effort resulted in the sisters seeding the fund with $46.6 million, which grew from other investors, including some other congregations of sisters, to $130 million by the time it launched in 2020. It is now capitalized at $160 million. The fund has a private investment option, which invests directly in companies the way venture capital firms do, and one that trades in public equities such as stocks and bonds.

While the Great Lakes Advisors fund is open to the public, the public equities side of Morgan Stanley's Global Climate Impact Fund is only open to nonprofit organizations, and the private investment side — which is now closed to new investors — was by invitation only. Like a mutual fund, the investments are chosen and traded by Morgan Stanley fund managers.

Kristina Van Liew, the managing director of wealth management at Graystone Consulting, which is Morgan Stanley's institutional investing division, said governments need to take action on climate change, but that will not be enough: The corporate and finance worlds will have to play a major role, as well.

Van Liew met Daly in 2015, when Daly and others were approaching dozens of investment banks in search of a way to make their portfolios not just free of fossil fuels but proactive in fighting climate change and helping the communities it hurts the most.

"They wanted to move beyond socially responsible investing and actively address climate change," Van Liew said. "But they went one step further: They worked with Wall Street to democratize access to an entire category of investing."

Daly said in a follow-up interview Nov. 16 that the funds have been investing in industries such as wind and solar energy, but also innovations such as a company that recycles plastic to make shipping pallets, taking plastic out of the waste stream and reducing the amount of trees cut to make wood pallets. Another provides solar energy to remote villages that have never had electricity before or have relied on gasoline generators.

Daly said the move may have been groundbreaking, but was just the next step on a decadeslong journey to make the congregations' portfolios an active part of their charism and mission. The fund also meets the U.N. Sustainable Development Goals.

"We were really focused on, 'Let's create the alternative,' " Daly said. "Let's invest in what needs to be invested in."