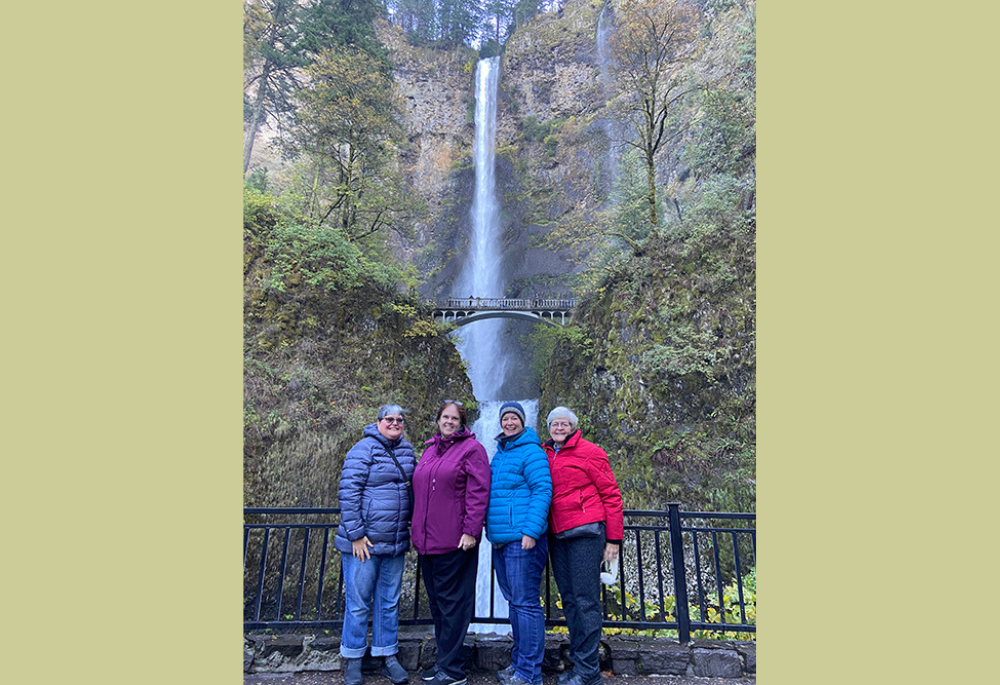 Jennifer Wilson and members of the vocation team for the Sisters of Mercy stand at the bottom of the falls before hiking to the top. (Courtesy of Jennifer Wilson)

We recently celebrated Epiphany and I found myself thinking more about the Three Kings than I usually do. This was prompted by a poem that was part of a reflection I attended. I read the poem — "The Three Kings," by Dorothee Soelle — in a book called Revolutionary Patience. The poem begins by questioning why they started out at all and why they kept going. I started thinking about the poem and that led to the following questions. Why exactly would someone just follow a light in the sky? How could they keep going for months without any clear idea of where they were going?

This got me thinking about journeys. Often journeys we take start out with some elements of the journey being known, but so much is also unknown. I usually have a clear plan in my mind of how the journey is going to go. But I can't say that any journey of significance that I have taken has gone how I had planned or envisioned it.

That marked the beginning of a journey I am still on, and one that has been different in so many ways than I expected. At 28 years old I am sure I thought myself smarter than those wise men. I knew what it was to which I was saying yes. I knew that I was following what God was asking me to do. I probably thought that I knew a lot of other things too! I was absolutely sure that it was going to be perfect. I mean after all — I was doing what God was asking, so how could anything possibly go wrong?

On Epiphany Pope Francis, speaking from the window of the Apostolic Palace, said, "The Magi allowed themselves to be amazed and discomforted by the novelty of the star and they set out on a journey toward the unknown. Wise and educated, they were fascinated more by what they did not know than by what they knew. They felt called to go beyond."

I allowed myself to say yes to where I was being called — even if at the time, I may have had incompletely formed ideas about what I thought I was being called to. As I lived into the yes, I began to see that "perfect" was nowhere to be found. I allowed myself to be OK with not knowing what was going to happen. I would say that being fascinated by the unknown, like the wise men, wasn't exactly what I felt in the beginning. I did begin to develop a deep trust that God was in it all. It hasn't been perfect, but it has been beautiful.

The new year is a time to reflect on what has been and to look forward to what is coming. It is easy to look back on 2022 and think of the hard and difficult things. I can focus on how COVID-19 is still here, or on the natural disasters that are getting worse, or other events. Twice this year I found myself facing what the media was calling the "snow apocalypse," and its unprecedented conditions. 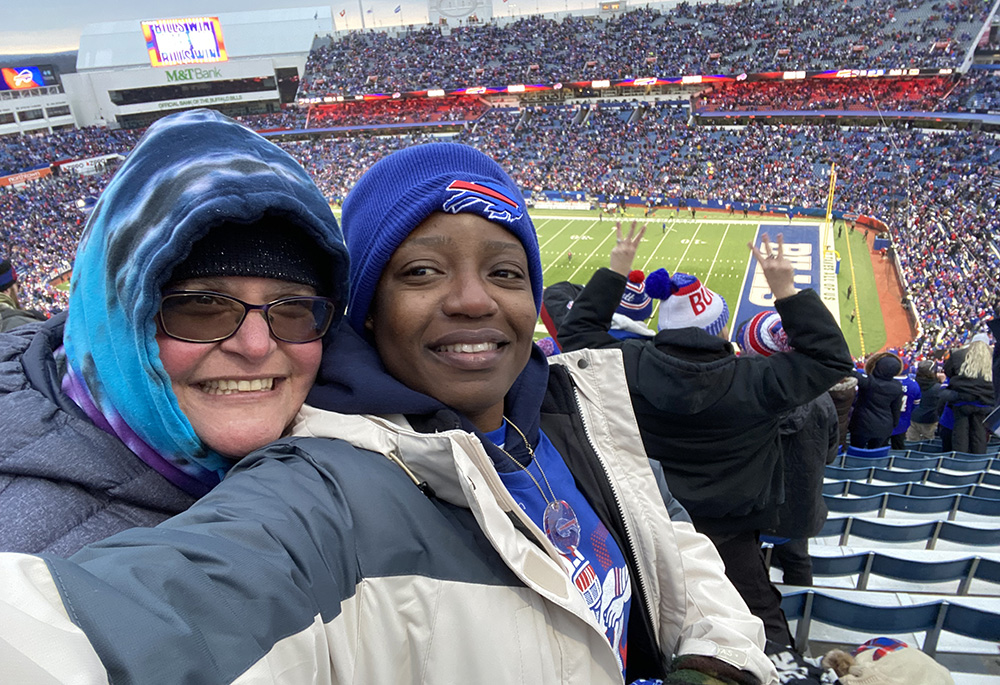 Jennifer Wilson and her friend Alex enjoy a moment of joy in 2023 at a Buffalo Bills football game. (Courtesy of Jennifer Wilson)

I could fill up the rest of the page with challenges that occurred during 2022 and I would be forgetting about the beautiful moments that were probably more numerous than the challenging ones. There were small moments and big moments and everything in between: the joy and awe I felt while standing on top of a waterfall in Oregon. Excitement and gratitude as three Sisters of Mercy celebrated making perpetual vows, and two others made first vows. A woman from Haiti joined our community and has added love and laughter to our days.

I went to a rodeo, kayaked in several new places, spent a week at a beautiful retreat center. I spent two great weeks reconnecting with friends and sisters in Guyana after the pandemic had kept me from visiting. A week at Lake Erie with my family. Dinners with the people I live with.  The times I spent playing cards and Farkle (a dice game) with my family and the sisters. All of these moments brought joy as I journeyed through 2022.

We are now two weeks into 2023. It is my hope that all of us in some way can trust beyond what we know, or think is going to happen in 2023. That we allow God to come into all parts of our lives and — like the wise men — allow ourselves to be amazed and discomfited. Pause for a moment to recount the beautiful moments that 2023 has already ushered in.