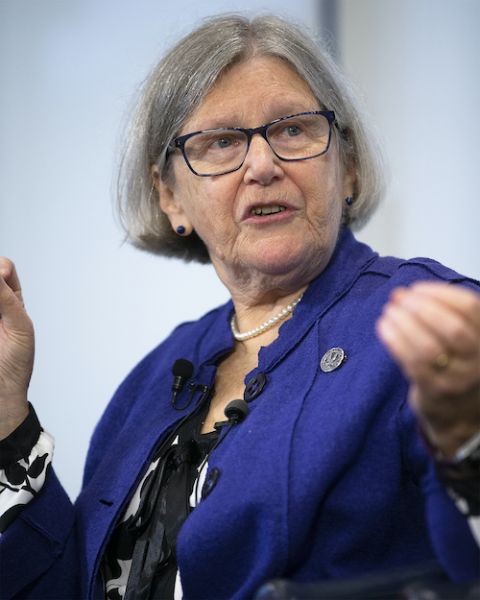 Calling Catholics to be more engaged in politics, by showing up to town halls, discussing with neighbors and comparing candidates, Sr. Simone Campbell said that "politics is where our Gospel lives in society." Campbell, who belongs to the Sisters of Social Service, is the executive director of Network, a group that organizes and lobbies for social reform.

Speaking virtually at the Solidarity on Tap Wednesdays April 29, Campbell said people need to change the system that is exploiting the Earth and people. "How do we carry out the Gospel in our social setting? It's through the political realm. We have to care for those who are at the margins and to change the systems that create the margins."

"If we are just tinkering on the edges — you know, riding my bike, being nice to my neighbor — well, that's nice. But that's not sufficient to embody the Gospel in our time. It's such an urgent need."

Solidarity on Tap Wednesdays is a Jesuit initiative where activists and young people gather at a local pub to discuss social justice issues and hear from prominent speakers. The gatherings take place across various U.S. cities, but has now gone virtual (done via livestream video) due to the coronavirus lockdown. The event is sponsored by the Ignatian Solidarity Network, Jesuit Volunteer Corps, Jesuit Volunteer Corps Northwest, Boston College School of Theology and Ministry, Jesuit School of Theology at Santa Clara University, Maryknoll Lay Missioners, and Jesuitical (America magazine's podcast).

Campbell said people often wondered how a nun could be so politically active. She reminded them that as a social activist, her "ministry is a political one."

"We know that the social mission of the church is to embody the Gospel, and to bring about the common good. That's what's needed in this election. We've got to wake up to our communal reality in relationship with each other. We have a little bit of work to do."

Encouraging young people to engage in the electoral process, she said they have a lot of "power" because politicians know they are the future of voting and "want to win you over."

"They also know that you've got the innovative ideas of where policy needs to go. So, my experience is trying to support young advocates in speaking their minds. And getting beyond their parents' sound bites," she said.

Although young people sometimes take in their parents' political talking points, it's when they start thinking for themselves that they truly emerge as "powerful," said Campbell.

She also called for reform in wages and tax policy to help the poor live with dignity. "Tax policy should be a mechanism for collecting enough money to pay for what we need, but also doing some redistribution, for folks that aren't getting their fair share."

She asked Catholics to look closely at their candidates — not just presidential, but state candidates as well — and ask if they are willing to speak for needs of the community at the risk of displeasing the party leadership.

"It's a rough and tumble world, but we cannot be spectators. We need to be engaged."

Campbell said that Pope Francis' leadership has influenced public discourse and encouraged many Catholics to become activists for social change. Five years ago, when Francis visited the United States, he called for building bridges during his speech to Congress. "The place where it does continue to echo is in young people and folks struggling for justice," she said.

However, she expressed concern over the recent phone meeting that included Catholic bishops with President Donald Trump and said not all of them are following Francis' teachings.

Campbell said she found some conversation between the bishops and Trump "disturbing," because they failed to challenge the president "about his very unchristian approaches."

"And so, Pope Francis gives me a lot of hope. But here's my challenge: Not everyone is following Pope Francis. They have their own ideas of power and desire to cater to that power."

Campbell is currently waiting for the publication of her upcoming book, which was initially scheduled for an August release. But the coronavirus lockdown could cause some delays.

Speaking about how she spends her time during the lockdown, she said,"I try to go for walks every afternoon. The other thing I do is read trash mysteries — that's my secret. And I love trash mysteries that are set in other places. It's interesting, it's like being someplace else."

Pandemic ponderings: How will we be different?