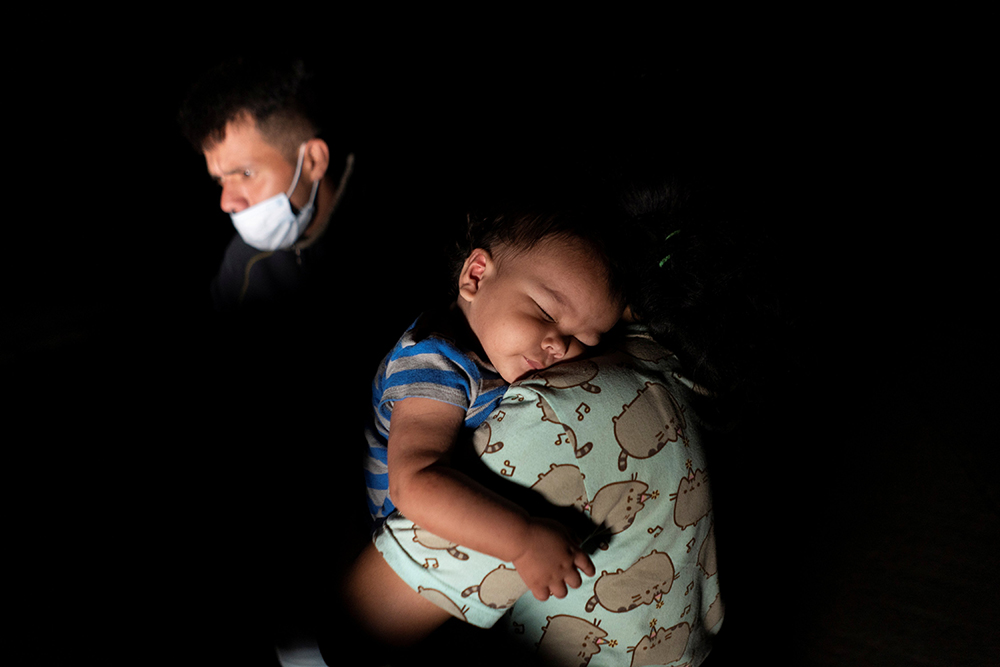 A migrant child from Central America sleeps on his mother's shoulder in Roma, Texas, July 28, 2021, after they crossed the Rio Grande into the United States from Mexico seeking asylum. (CNS/Reuters/Go Nakamura)

When you hear Christmas, what comes to mind? Parties and presents? Travel and short-staffed offices? Concerts and pageants? Crib/manger scenes and hymns and all-too-familiar Scripture readings? When I encountered Christmas decorations and advertisements and music at the end of October, I exclaimed to no one in particular, "It's time to get real!" In my experience, Christmas had become romanticized.

For whatever reasons, we have taken the stories and symbols around Christmas and made them facts. Archeologists and historians have offered insights and real facts, but their insights and teachings are largely ignored and — I'd venture to say — most of the people in the pews have never heard them.

Let's get real: We don't know when or where Jesus was born. But we all have the image of the Holy Family in a cave or shed-type structure on the outskirts of an insignificant town called Bethlehem.

If Jesus was born in Bethlehem, we have a very pregnant young woman and her new husband traveling to his hometown. That means long walks and/or very uncomfortable donkey rides. Donkeys are great for hauling but not so much for riding because their backs are so wide. She wouldn't have had her woman kin with her, leaving her without much of a support system at a very vulnerable time.

She gives birth in what can be described as a shed or cave. It offered some safety and protection from the elements, but it was far from clean and comfortable. Animals would have provided warmth but also unpleasant smells and potential aggression toward the humans who are sharing their space.

I have nothing against the pageants and concerts and 'warm fuzzy' representations of Christmas. I just want to be real.

Scripture tells us angels announce the birth, and the next thing you know visitors are there gawking and bringing odd gifts.

We are told shepherds abandon their flocks to come visit. No way, the flocks were their life and livelihood.

Wise Men, often referred to as kings, bring gifts of gold, frankincense and myrrh. No scriptural explanation, just one line announcing the gifts. I can count on one hand how many homilies or reflections I've heard to help us understand the significance of the visitors and their gifts.

The symbolism I think we are missing: Jesus was born in the most unexpected place and was welcomed to earth by the outcasts of society. Shepherds, because their living with and tending animals, broke most of the purity laws of Judaism, were pretty low on the social ladder, just above lepers. The Wise Men represent God being present to all people, not just the obedient Jews. Their gifts: ancient symbols of royalty, Jewish practice, and death.

Mary, Jesus' mom, is often portrayed as meek and mild. Let's get real, she was not! She was one of few people I can find in Scripture that "talked back" to the angel of God and didn't get "zapped." For example, Zechariah lost his ability to speak; Jacob wrestled and ended up limping.

Mary asks the angel of God all kinds of questions before agreeing to become the mother of Jesus, not really knowing what that would mean, and proclaiming her fiat — her yes to God. But that's not the Mary we hear about in the Nativity narrative.

Joseph, a newlywed himself with a child on the way, is often described and portrayed as a silent onlooker. Maybe. I find it hard to believe he would have just been standing around watching. He would have been very much on alert, protecting his very vulnerable wife and newborn son. And while Scripture tells us shepherds and wise men came to visit, I'd bet my life they were not allowed too close.

Joseph, a wise and attentive man, knew he had to move his family quickly to keep all of them safe. Depending on the liturgical cycle, we may or may not hear the Scripture story of Joseph taking his young family and fleeing. They became refugees to save their lives.

In all probability, Mary was not a docile mom and Joseph did not stand on the sidelines. They were parents who experienced all the joys and challenges and heartache of parents from the beginning of time. They had the added burdens of all the angel of God told them — their child was the long-expected and promised savior and would be both loved and hated.

The hymns we all sing speak about silent night and joy to the world and (hark! the herald) angels singing. No mention is made of fear: Infant mortality in the ancient world was the rule rather than the exception. No mention is made of their being refugees and needing to flee for their lives. There is no mention of all the unknowns that life brings every day. No mention of what it all really means when we "get real."

Jesus, son of God, Emmanuel, God with us, disrupted life as it was known in a specific time and place so many hundreds of years ago. Believers are still trying to figure out what it all means, how we are called to live. How we should encounter those on the margins, those looked down upon or shunned by part or all of society.

To be clear, I have nothing against the pageants and concerts and "warm fuzzy" representations of Christmas. I just want to be real. Celebrate a new birth, God made human. But also recognize and explore what exactly that means personally and communally. God with us — all of us.

Not just believers, not just rule-followers, not just those deemed "acceptable," not just members of whatever "in-group." If we get real, it's all of us.