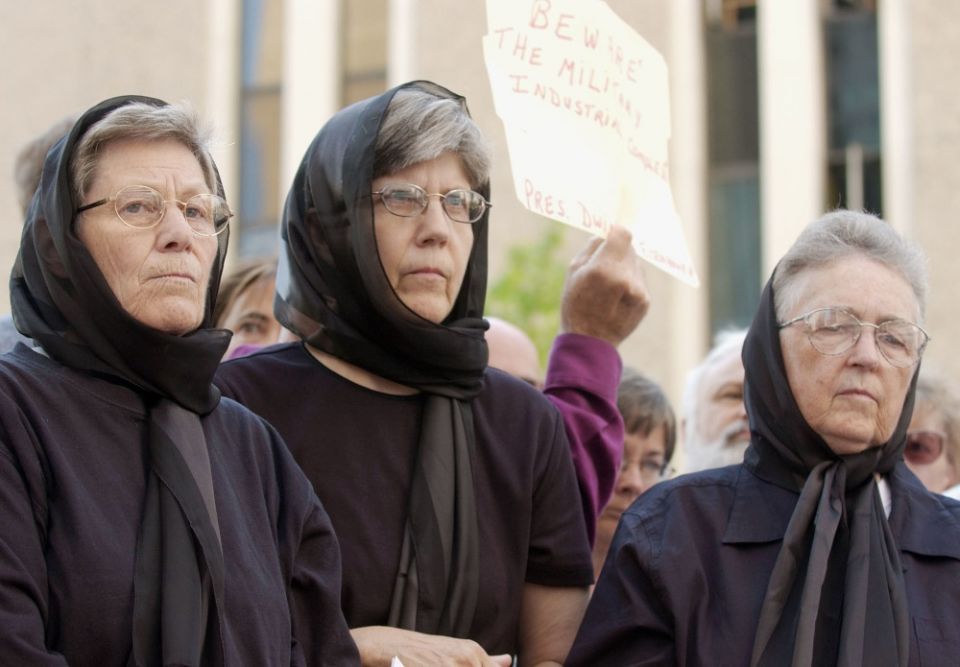 In this July 25, 2003 file photo, Dominican nuns, from left, Ardeth Platte, Carol Gilbert and Jackie Hudson listen to speakers before addressing a crowd outside the federal courthouse in downtown Denver. Platte died Sept. 30 at the age of 84. (AP File/David Zalubowski)

Sr. Ardeth Platte, a Dominican order nun who fought for nuclear disarmament and later served as an inspiration for a character on the popular Netflix show "Orange Is the New Black," died in her sleep at the Dorothy Day Catholic Worker House in Washington, D.C., on Sept. 30.

Platte, 84, who often worked in tandem with her best friend and frequent collaborator, Sr. Carol Gilbert, spent years in prison for nonviolent civil disobedience in opposition to nuclear weapons and war.

It was Gilbert who discovered Platte on Wednesday morning. She had apparently been listening to the radio, as she was still wearing headphones when Gilbert found her. Gilbert said Platte had listened to the presidential debate Tuesday night.

In recent years, the duo spent the brunt of their work speaking in support of the Treaty on the Prohibition of Nuclear Weapons.

Gilbert said she had been excited Wednesday morning at the prospect of telling Platte that Malaysia had become the 46th nation to ratify the treaty. Malaysia's decision means just four additional ratifications are needed for the landmark disarmament treaty to be brought into force, Gilbert said. Gilbert said Platte did her final Zoom presentation in support of the treaty on Saturday to the Boston University School of Theology.

"I'm numb," Gilbert said in a telephone interview. "She was fine yesterday. We did work. I guess you just don't think death can come that quickly."

Related: From two Dominican sisters: a master class in why the bomb is bad

Platte was born in Lansing, Michigan, and began her work for the Dominicans as a teacher. In the 1960s and '70s, she served as principal and director of alternative education at the former St. Joseph's Educational Center in Saginaw, Michigan. Her work as an educator impressed many in the community, and Platte was urged to run for the Saginaw City Council. She won, serving as councilwoman from 1973-1985.

She also served as coordinator of Saginaw's Home for Peace and Justice for more than a decade. It was in Michigan that Platte began her anti-nuclear work, and where Gilbert joined her.

Later, the pair moved to Baltimore to join the Jonah House resistance community with Elizabeth McAlister and Philip Berrigan.  In 2002, Platte, Gilbert and Sr. Jackie Hudson gained international attention when they dressed as weapons inspectors, entered and were arrested at a Minuteman III nuclear missile site in Colorado.

Convicted of federal felony charges, the three nuns were sentenced to prison. Hudson died in 2011.

When Platte and Gilbert returned to Colorado in 2017 for a rally, a story in The Denver Post stated: "In the years since they served their sentences in federal prison, the Dominican sisters, hardly deterred by the threat of future incarceration, have become pop culture icons."

A character on the Netflix series "Orange Is the New Black" was based on Platte, who practiced yoga at Danbury Federal Correctional Institution with Piper Kerman, author of the book on which the series about a group of women serving time in a minimum-security women's prison is based.

A documentary film about the sisters, called "Conviction," led to stories about the trio being published in The New Yorker, The New York Times and The Washington Post, as well as some international publications.

In recent months, Platte and Gilbert joined actress Jane Fonda for large protests at the White House. Gilbert, who called 911 when she realized Platte had died, said the Catholic Worker house was soon crawling with D.C. police.

"I wanted to tell Ardeth that even in death you have to make a scene, made our bedroom here into a crime scene," Gilbert said.

In an email announcement of Platte's sudden death sent to many of her friends, Catholic activist Paul Magno of Jonah House wrote: "Deep shock to hear this but grateful for all that Ardeth has given to making the peace of Christ radiate through our world."