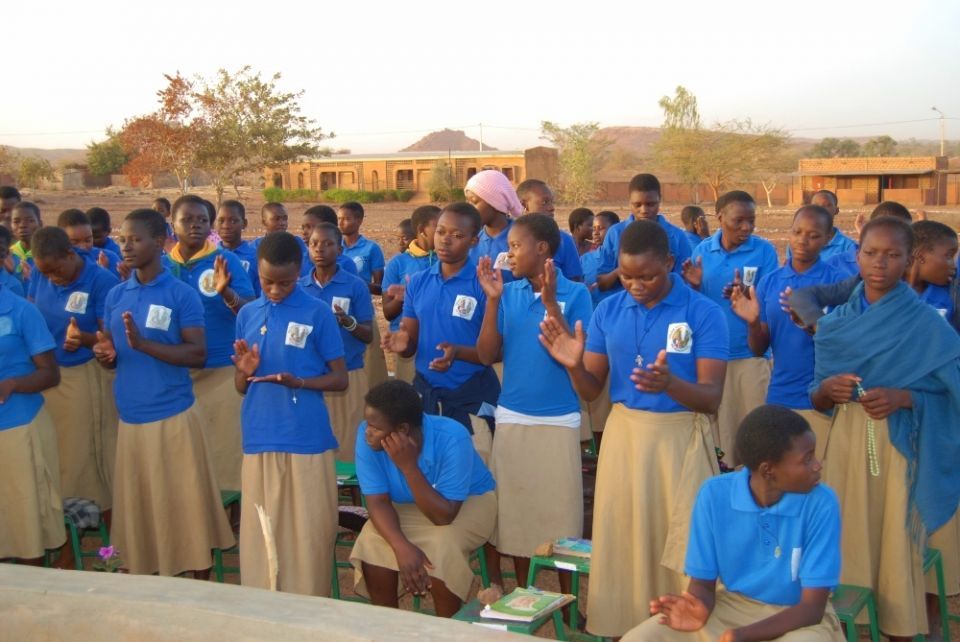 Girls being educated by the Sisters of the Immaculate Conception in Burkina Faso attend a school assembly. (Courtesy of Sr. Marguerite Kankouan)

Kofi Annan, former secretary-general of the United Nations, said it very well: "There is no tool for development more effective than the education of girls. ... If we are to succeed in our efforts to build a more healthy, peaceful and equitable world, the classrooms of the world have to be full of girls as well as boys."

However, his message often reaches only a few. There are national and international organizations working for girls' education here in Burkina Faso — schools built, scholarships awarded and other actions to favor it — but the road is hard and long. Mentalities are difficult to convert.

I was one of the fortunate girls. My parents, as practicing Christians, sent me to school and educated me according to evangelical principles. They had been converted to Christianity at very young ages. I was happy for their conversion because it reaped benefits for my future.

Even before starting school, I was determined not to be married, but did not know what that might mean. Then, when I first saw the nuns, I exclaimed: "I want to be like these people dressed in white." I attended a mission school where I had academic education, but also a practical education that taught me how to live as a responsible and honest person, following the commandment of love.

The school was close to the sisters' house and so I saw them praying and working every day. They even cultivated the land for food, like my parents. This simplicity attracted me as well.

I eventually joined them and made my first, temporary vows in 1984 — but for me, they were perpetual. Soon after, I was assigned to serve in the parish, and since completing my university degree in philosophy in 1994, I have been teaching.

Too many girls here in Burkina Faso are still deprived and discriminated against. They are often seen only as "girls," irrelevant and not worth much except to be married as young as possible, even in the early teen years. Female genital mutilation is still practiced for both religious and traditional reasons. Wives are basically considered property and therefore without rights, and always kept in a lower status than their husbands. Their responsibility is to support their husbands and families, and thus, according to tradition, school fees would be wasted on them. Boys are always favored over girls.

Thankfully, the Catholic Church has always worked in defense of girls, and we women religious are one of its fruits. Schools for girls are an imperative of my congregation, the Sisters of the Immaculate Conception, and this commitment was one thing that attracted me to them.

Our founder, Bishop Joanny Thévenoud, was also the founder of the Catholic Church in Burkina Faso. He passed on his commitment to education, health and economic development to our congregation, now numbering 466 members, 17 novices and 33 postulants. Our mission focus is on the poorest of the poor, and girls are at the top of that group. We strive to inculcate in them a sense of dignity and teach them about their rights, something ignored in our country.

Discrimination against girls is prevalent for economic, religious and cultural reasons. Having the girls married off early is almost a priority among the different beliefs. The Muslim faith has the most adherents in Burkina Faso at about 61%, then Christian at 23% and traditional belief at 15%. In my own family, we have Catholics, Protestants, Muslims and those who practice traditional beliefs.

As of October 2020, the Sisters of the Immaculate Conception are educating 2,122 students in high school, primary and kindergarten, along with caring for 113 orphans. The students and children are usually from Christian and Muslim families. Our schools were closed early in this year because of COVID-19, and this led to a drop in the number of students, who will probably never complete the school program now.

The orphaned children come from many parts of the country. Some have parents who are unable to care for the children, but the majority have no parents. For these, we seek out extended family members, at least for holidays.

Poverty is a serious issue in Burkina. The majority of families throughout the country are low income. Nearly 90% work in agriculture, producing food and animals. Our geography is also a detriment to economic development because our climate is very hot. A recent agricultural approach has been found successful for small farmers — market gardening around small bodies of water, artificial or natural.

Burkina is surrounded by the six countries of Mali, Niger, Benin, Togo, Ghana and Côte d'Ivoire, so along with being landlocked and thus needing to negotiate access to the sea, strengthening security has also been a focus of our government. We have experienced insurgence activity and terrorism, particularly along the Niger and Mali borders. Keeping these border communities safe is a huge and expensive undertaking.

Our bishops encourage us as a country to keep in mind that Burkina Faso has always proudly considered itself a "country of upright men" striving to refrain from corruption and violence. In a recent article in Cisa News Africa, I read that the bishops said: "The history of our country is that of a people who have always known how to make the cultural, ethnic and religious differences that characterize its citizens, a source of wealth and an example of cohesion in the eyes of the world."

All we can do is pray that we stay true to our history and tradition. 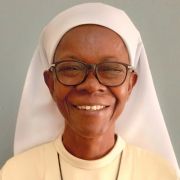 Marguerite Kankouan is a member of the Sisters of the Immaculate Conception from the Koudougou Diocese in Burkina Faso. Her family were farmers, and she did not like going to school, but thanks to her parents' determination, she finished, and then spent her whole life in education and fighting for the education of girls. She finished her education as part of her formation for religious life, then entered the congregation. After doing parish ministry — as sacristan, catechist, and animator of Catholic Action movements — she began teaching in high school, then university.

Ministry | Converting Burkina Faso on the rights and education of girls