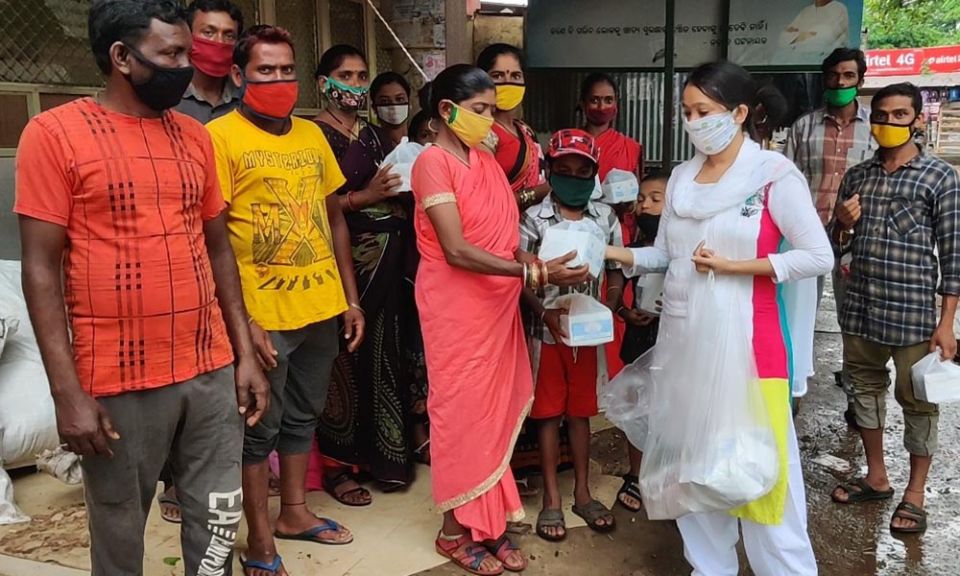 Sujata Jena at a bus stand in Bhubaneswar, meeting some workers of Kalahandi, Odisha, in India, who returned from Tamil Nadu, some 2,000 kilometers (1,240 miles) away from Odisha. She shared some food packs with them as they didn't have money to buy food during their two-day journey. (Provided photo)

On July 19, I received a call at 7 p.m. As soon as I picked up the phone, I heard, "Sister, I am Gaja Takri. Hope you remember me! I returned from Kerala to Odisha because of the 'Shramik' [labor] Express train you had arranged for us for free on June 17, 2020."

Takri, a 23-year-old laborer, had another request: when he left Kerala, India, the employer had not paid him or his 10 companions' wages for 15 days. "The employer promised that he would send it to my account soon. It has been a month. He is not responding to my call," Takri said. "Please appeal to him on my behalf."

The next morning, I called the employer and asked: "Takri and the other 10 laborers of your company are starving because of no work in their villages. Will you please pay their [overdue wages] today? Otherwise, they might starve!"

The employer asked me who I was. I told him, "I am a lawyer and voluntarily working for the migrants." The employer promised to send the money with no arguments.

Later, Takri cycled three miles to his bank and found the wages in his account. He thanked me, but expressed fear about possible punishment on his return to work with the same employer. I counseled him and assured him of his safety.

It gives me such joy to be part of laborers' struggles and help them out by being a voice for the ones who had to migrate within our country because of distressing circumstances.

Takri's family lives in a remote village called Ambadola, Rayagada, one of the poorest districts of the Eastern Indian state, Odisha. He is the only breadwinner of his family. He, like others, receives 10 kilos (about 22 pounds) of rice and 2 kilos (about 4 pounds) of daal (lentil) in a month as COVID-19 relief measures from the government. "It is not enough for my pregnant wife, mother, and our two children," he said.

The sudden announcement on March 24 of a national lockdown to contain the spread of COVID-19 was tragic, and put at risk the lives and livelihood of millions of the most vulnerable people, especially migrant workers like Takri.

The cities migrants had built turned their backs on them! Employers for whom they had shed their sweat became strangers!

In a Jesuit webinar I participated in on May 16, Professor K.R. Shyam Sundar said that India records approximately 300 million migrants, over 20% of its estimated 1.3 billion population.

As a result of the lockdown, about 50 million migrants started to leave their places of work, trying to reach their home villages on foot, bicycles, milk vans, trucks, sand mullers, binders, buses or trains.

Many fell sick and died on the way while walking 1,000 miles; many got into accidents and lost their lives. Among the heartbreaking stories are pregnant women, newborn babies, elderly workers and young children.

Most of the migrant workers are from the Eastern Indian states — Odisha, West Bengal, Bihar, Jharkhand and Chhattisgarh.

Thinking about these people from my comforts of my convent gave me sleepless nights. Often I broke into tears and turned to the Lord to beg his intervention. But an inner voice kept prompting me: Grief isn't enough, and action is the need of the hour.

In May, one of my close contacts suggested that I join a WhatsApp group — Indian Migrant Transport. It was my first step in getting in touch with people in Bangalore, the capital of India's southern Karnataka state.

On June 9, I saw a video clip of about 10 workers locked in a room in Kerala, a southwestern Indian state. Their wages were being held back and their ATM bank cards confiscated. The men said their employer had locked them up, and they desperately needed help to reach their villages in Odisha — my home state — more than 1,000 miles northeast.

It pained me to know their situation. I resolved to help them. I contacted the labor commissioner of Kerala, Pranabjyoti Nath, who listened patiently and told me to send him the details about the stranded migrants.

In just two hours Nath sent back a message: "The matter is settled! The employer is ready to arrange a vehicle and send them to Odisha at his own expense." That boosted my morale!

In a country that has been criticized for the irresponsibility of the government and its employees, Nath is an antidote — a proven trendsetter! This was my first experience of networking with government officials; Nath even introduced me to his officers, making my task easier. 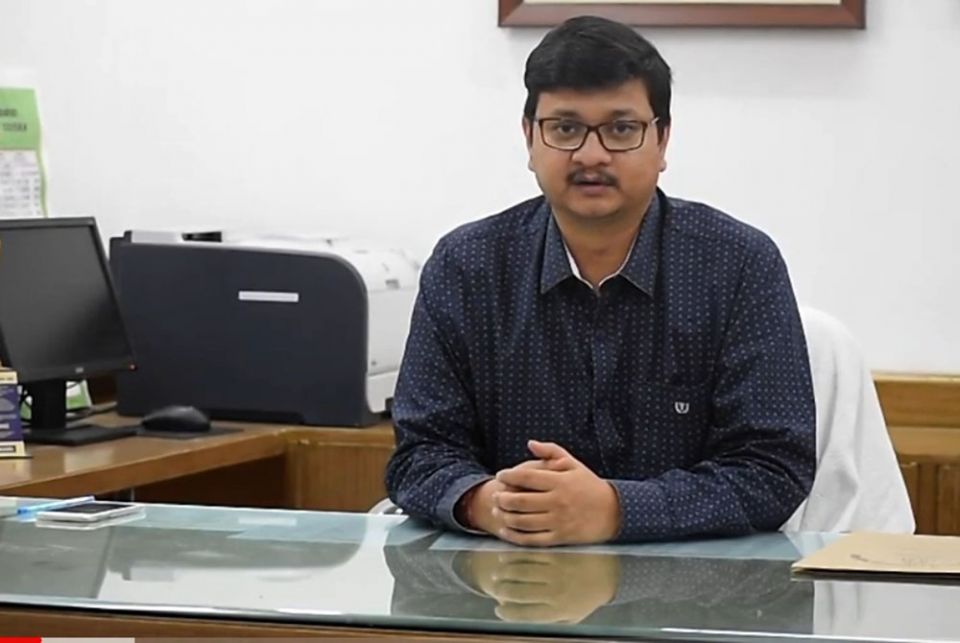 By June 17, in collaboration with the Kerala labor department, I helped more than 300 migrants stranded in southern Indian states to reach their native villages in north India.

The migrants shared my number as a helpline for others, and I got many calls.

I sent loads of requests for help to the labor commissioner, and his staff acted promptly.

I am now in contact with about 500 migrants. I know them by their name, place, face (some from WhatsApp display pictures), and the many issues they face. They are poor people from remote villages. They do not have proper houses, livelihood resources, or health care security. Most of their children do not go to school, as the parents work out of the state.

Whenever a new person calls me, I hear, "Sister, many people talk about you in our place. I got your contact details from them. You have helped them. So please help me too."

Life is all about giving. I have received a lot from the Lord. As a nun-advocate and social worker, I get an opportunity to be a voice of the "voiceless" to build a humane and just society.

One realization that I have gained in all these challenges is: we need to depend on each other for survival and to reach out to those in need. Networking, collaboration and lobbying is a way forward.

There are many others with this mission. I look up to them. This experience of networking with government officers, individuals, and civil society groups is an inspiring and life-giving experience for me. I believe that networking is a powerful means to build a better society.

As most of the migrants are back home, I continue to speak to the government officials, local as well as national, to ensure they receive the food and assistance available during this pandemic.

Indeed, the lockdown has brought out the true human spirit of kindness as we help each other. I feel privileged that I have Jesus on the cross to inspire, empower and strengthen me to reach out to those most in need during this health crisis.

[Sujata Jena is a member of the Sacred Hearts of Jesus and Mary Congregation. She is an advocate and social activist. She has worked among Dalit and tribal women, children and youth of the eastern Indian states of Odisha and West Bengal. She is a correspondent for Matters India, a news portal that focuses on religious and social issues.]