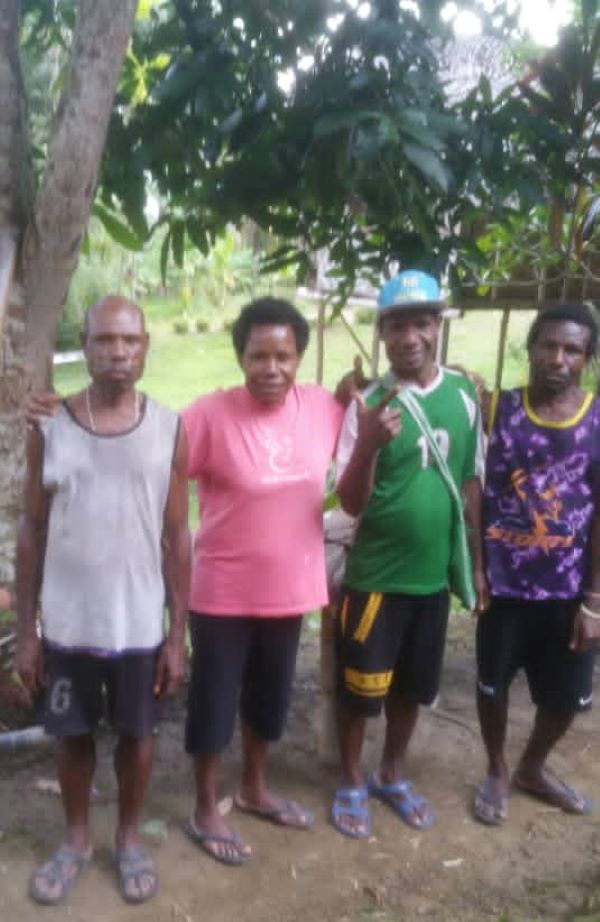 Imelda Suyai, a Sister of Presentation of the Blessed Virgin Mary, pictured with three of her four brothers, grew up in a rural village in Papua New Guinea. Her parents were subsistence farmers. (Courtesy of Sr. Imelda Suyai)

My country of Papua New Guinea (PNG) is the third largest island country in the world. With only 8 million people, we have great cultural diversity and about 840 languages. We are part of the British Commonwealth and became independent in 1975. I live in Aitape, a small town of about 20,000 on the north coast of PNG. I have been a sister of the Presentation of the Blessed Virgin Mary for 17 years.

Communities on PNG are isolated from one another by our geography of tropical forests and rivers that are difficult to navigate. The humidity keeps plants lush and thick, making it difficult to travel, explore and even maintain roads. Only about 13% of our population lives in urban areas, while the rest are subsistence farmers or fishers, like my family.

Aitape is one of the town centers in the northern part of PNG; because there are few roads, it has two airstrips for small planes. Travel and commerce within PNG are by air, boat or foot. Aitape sits directly on the coast and has been hit by three tsunamis in recent memory — in 1908, 1935 and 1998. Our Presentation Sisters who came from Australia in 1966 (and later founded our community here) experienced the 1998 tsunami with us.

One of the sisters was staying in a rural village across a river from Aitape when she noticed people looking at the sea, fascinated by what they thought was a large black ship. It suddenly dawned on her that it was not a ship, but a wall of water rushing toward them. She started screaming, encouraging people to run into the forest. Even though there were swamp areas between the sea and the village, much was destroyed and the people were trapped in the forest for several weeks, dependent on air-lifted supplies. 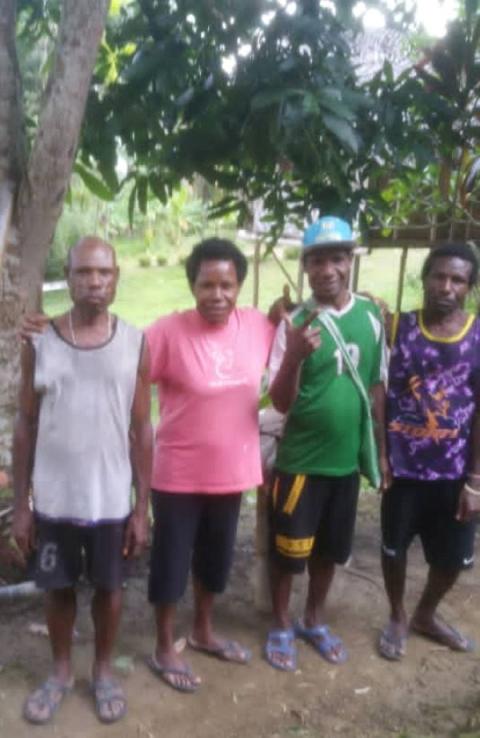 Imelda Suyai, a Sister of Presentation of the Blessed Virgin Mary, pictured with three of her four brothers, grew up in a rural village in Papua New Guinea. Her parents were subsistence farmers. (Courtesy of Sr. Imelda Suyai)

Living on an island like ours is a blessing, because it is beautiful, but the isolation has its disadvantages. I grew up in a rural village of Yili, near a place called Ningil where the first Australian sisters settled. There were seven children in my family — four males and three females. My parents were subsistence farmers who, with limited income, provided us well with food, clothing and education. My father died in 2001; my mother still lives on the farm.

Even though my parents were not educated, they wanted all of us children — even the girls — to have an education. They realized that if the children were educated, they would be cared for when they could no longer care for themselves. So, I started primary school in a Catholic school when I was 8 and completed grade 10 in 1992 at a local provincial school. Most of the schools in PNG are run by the national government, but a few are run by churches.

At this time, in PNG, students graduate from secondary education after grade 10. Few students have the opportunity to continue to grade 12 and university. Needless to say, girls here, as in many countries, rarely continue their education.

My family is Catholic; I think they converted in the 1960s when Franciscan missionaries came to our village. I had never thought of being a sister. In fact, I did not know any sisters until 1996, when the Diocese of Aitape was celebrating its 100-year anniversary of the arrival of missionaries from Germany. I was 21 at the time. At the celebration, I met a relative who was a Franciscan sister, and when I saw her, in my heart, I wanted to be like her. Because the Presentation Sisters were in Aitape, she suggested that I write to them to see if they would accept me. I wrote, and a few years later I joined the community in 1999.

Our PNG community is small — only 14 sisters. Right now I am living in Aitape with three other PNG sisters. We are all pastoral ministers, but I also work three days a week at the diocesan bookshop and am on the leadership team for our community. Whenever I can, I do pastoral work, which I really love —being with the people, listening to their stories, struggles and challenges. Many families here are poor and unemployed, so they suffer from financial worries. They often seek help, but there is little I can do.

Now, with COVID-19, things are even worse in the towns. Although there have not been many cases, we observe the restrictions of masks and limit the number of people at our gatherings. The capital and largest city, Port Moresby — far from Aitape — has had many cases of the virus.

COVID-19 arrived here at the end of 2019, but most of us were not aware of it until January 2020. The government then required immediate lockdown of all basic services, including schools and some hospitals. The health system weak and is struggling to accommodate the increased demand. Here in Aitape, we have a district hospital (managed by Catholics) that is now open.

From April to June, all schools in the country were closed, and learning stopped in places like Aitape, where families do not have computers. Those living in big cities like Port Morseby and a few other cities have access to technology, so students had the advantage of distance learning. Now, here in Aitape, the schools have reopened, but with strict rules.

Complying with government restrictions was new to us, as we are all from rural areas where communities are quite independent in making decisions, and many did not comply. However, the rural areas were not affected much by the pandemic. Communities are quite isolated from each other, so the disease cannot spread quickly — one advantage of isolation.

Our small Presentation communities are struggling along with the rest of the population because we do not have much income since everything closed down in January 2020. Our families are unable to help us because they too have limited income. Because we live in the town, we do not have a garden, so we must buy food at the local markets.

One of my biggest frustrations is the limited internet access. I am part of our leadership team, along with another PNG sister and two Australian Presentation sisters in Australia. Trying to meet and communicate is challenging because the network often is down. Our phones are the best means of communication, and that is how we stay connected. We do our best to minster to those around us and hope that our presence gives them comfort.