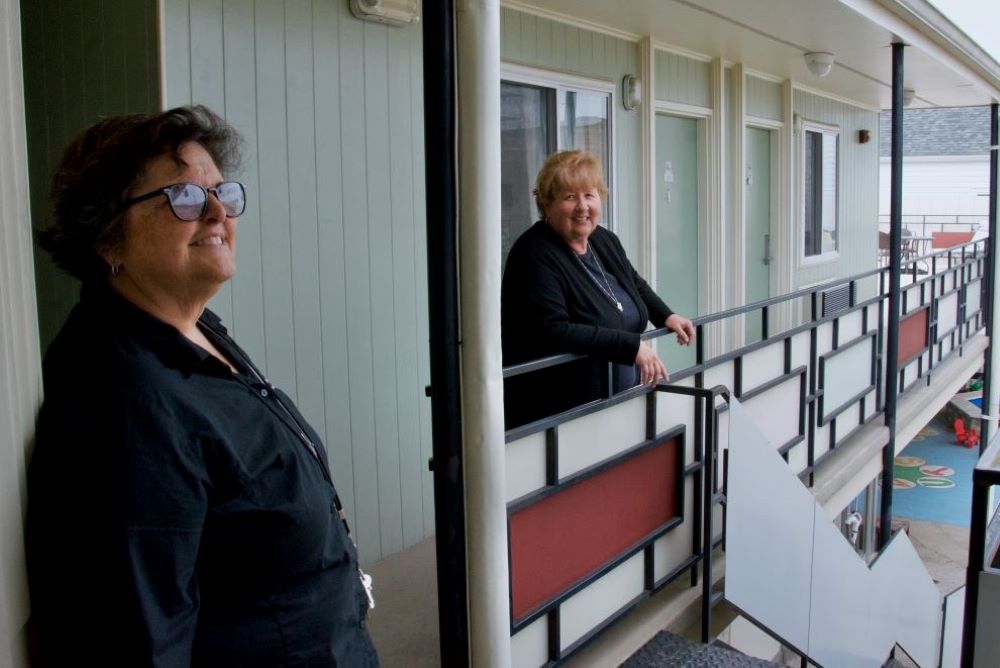 The yellow house sits in the middle of the block, its blue and white accents bright in the sun. Inside, a group of students on spring break from Creighton University in Omaha, Nebraska, relax on couches and under blankets with several sisters, listening to one young man play the guitar.

The eight college students are friendly but subdued. They have been busy during their stay at the House of Charity, a guest house for church, university and sister groups on mission trips to the area, volunteering at a homeless shelter, gutting a hurricane-damaged home, and learning about the New Orleans that lies beyond the tourist-heavy French Quarter. In this New Orleans, nearly 1 in 4 people live in poverty, there are an estimated 30,000 vacant, blighted properties, and 86% of students in public schools are economically disadvantaged.

Several women religious communities have come together in a number of ways in the Big Easy to navigate the area's unique dynamics of poverty, helping children with educational needs, people with health issues, and projects such as Hotel Hope, which serves women and children experiencing homelessness. 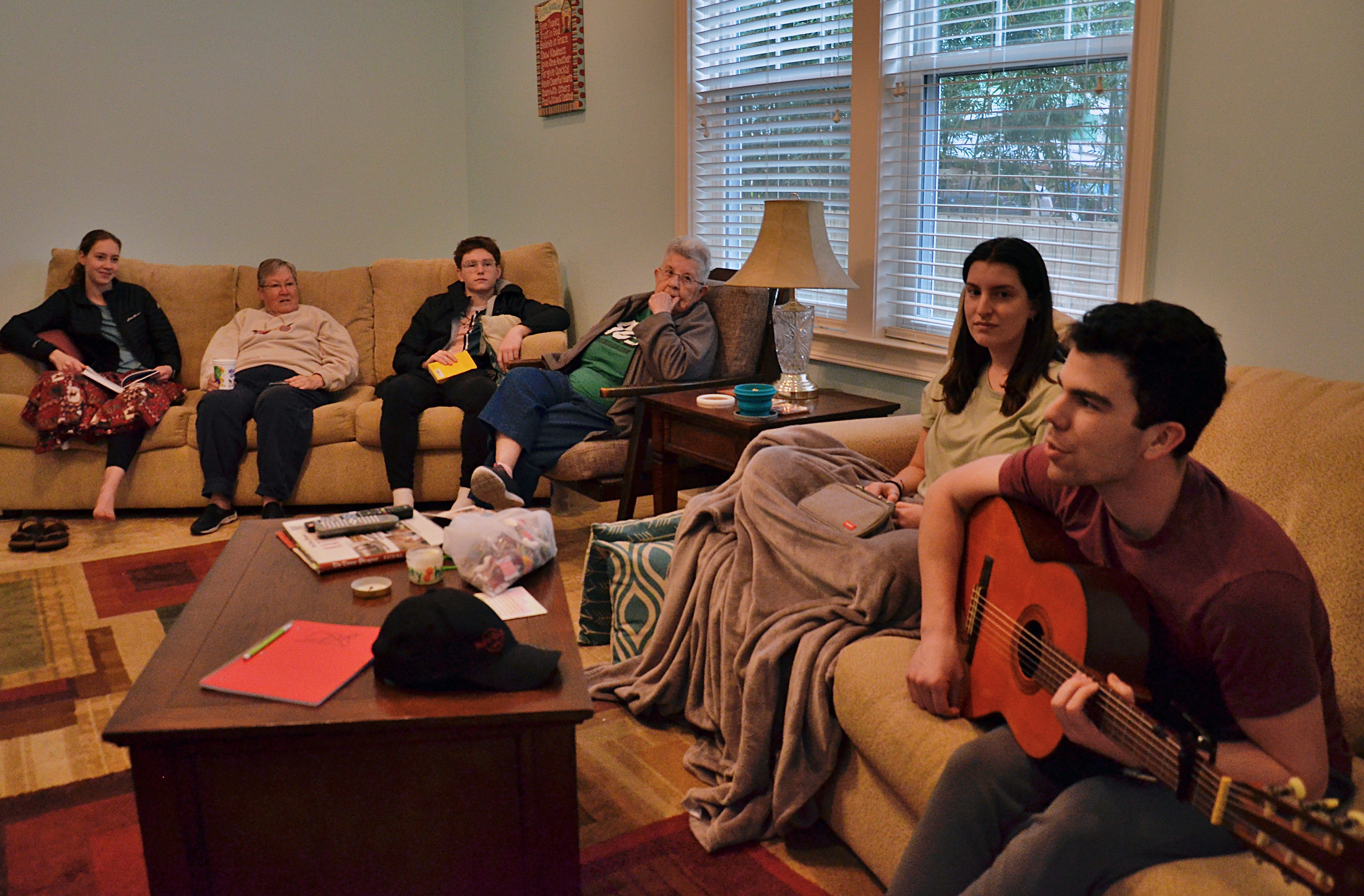 Students from Creighton University relax at the House of Charity in New Orleans after a long day of volunteering and learning about the city and its inhabitants. (GSR photo/Dan Stockman)

The House of Charity is one product of that collaboration, made possible by the 13 congregations in the Sisters of Charity Federation, which paid for the home for three resident sisters and up to 12 guests in three dorm rooms. The house had been hosting dozens of groups a year until the pandemic slowed it to almost zero. 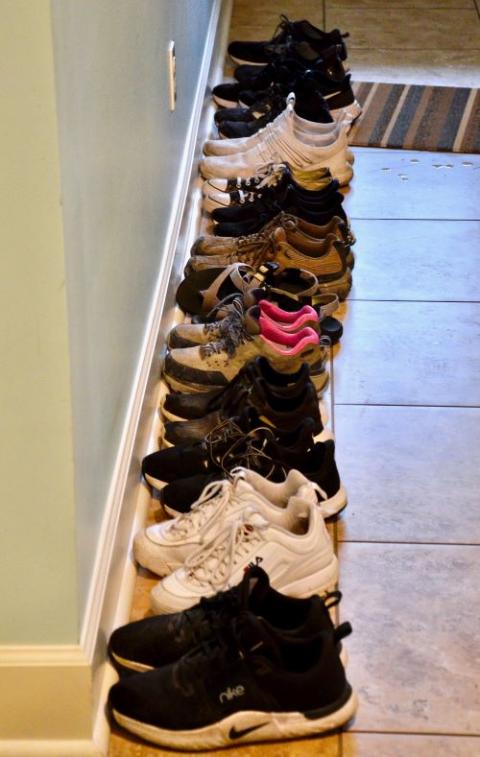 A line of shoes near the door from the guests at House of Charity in New Orleans, which houses groups on mission trips to the area. (GSR photo/Dan Stockman)

Gundler said the mission trips require a balancing act: The volunteers are there to donate their labor, but their generosity can't be exploited. They need to meet people and have experiences that will help them understand the unique dynamics of poverty in the area, and they need to see the rich cultural heritage of the region and its unique gifts to the world, such as jazz music, Mardi Gras and Creole cuisine, so they don't have a one-dimensional view of the city and its people.

The Creighton students spent one afternoon of their spring break in New Orleans' Bywater neighborhood at Studio Be, the studio and gallery of Brandan "BMIKE" Odums, a street artist, activist and filmmaker whose work appears all over the city and on the cover of actor Will Smith's autobiography, Will.

After touring the gallery space, which takes up several warehouses, the students met Odums, who explained how he got started and how his work is part of the push for racial and social justice.

His studio is next to the place where Homer Plessy was arrested in 1892 for violating the state's segregated railroad laws in an act of civil disobedience. His U.S. Supreme Court case, Plessy v. Ferguson, became a mark of shame for the United States when the court's 1896 decision upheld the doctrine of "separate but equal" and effectively sanctioned racial segregation for the next five decades.

"I don't have time to just make pretty pictures," Odums told the students. 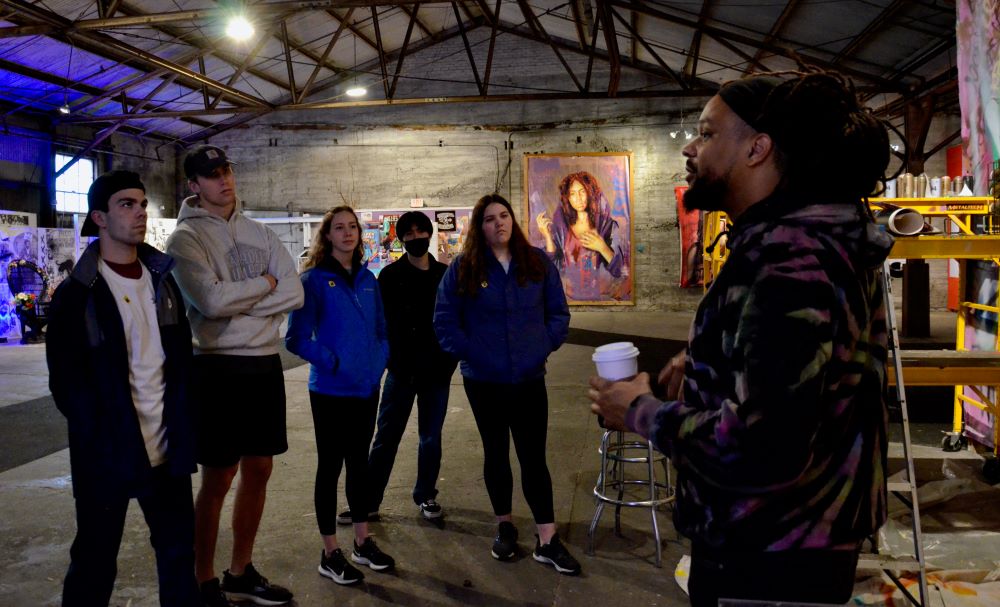 Students from Creighton University on a mission trip to New Orleans talk with street artist BMIKE Odums, right, at his studio in the Bywater neighborhood. (GSR photo/Dan Stockman)

The Creighton team and four AmeriCorps volunteers also traveled an hour and a half south of New Orleans to a home in Golden Meadow in the Mississippi River Delta that had its roof torn off by Hurricane Ida's 150 mph winds in August 2021. Nearly everything inside was ruined.

The students' job: emptying the house into a dumpster and tearing it down to the studs.

"They were able to salvage two bookcases and a table, and they're hoping they can salvage the piano, but everything else was trashed," Gundler said.

"The couple could probably do it themselves, but they just get overwhelmed because there's so much to do," she said.

Each night at dinner at the House of Charity, the Creighton students talked with the sisters about what they saw and heard and how they can make a difference through meeting people's immediate needs and through policies that empower people instead of trapping them in poverty.

Christi Morin, a Creighton senior majoring in Spanish and justice and peace studies, said the trip was especially rewarding.

A couple miles east of the House of Charity, Sr. Mary Lou Specha and Sr. Julie Marsh of the Sisters of the Presentation of the Blessed Virgin Mary coordinate Hotel Hope. The shelter for women and children experiencing homelessness has since 2018 been located in the former Crescent Palms Motel, a frequent destination for Black musicians in the 1960s who were playing in the French Quarter but weren't allowed to stay in hotels there because of segregation.

Now, Hotel Hope houses up to 20 families at a time in rooms with a double bed and a set of bunk beds. Families stay at Hotel Hope for 30 to 45 days, but staff members continue to follow up with them for up to a year to ensure the mother has a job, the children are in school and there is food in the refrigerator. 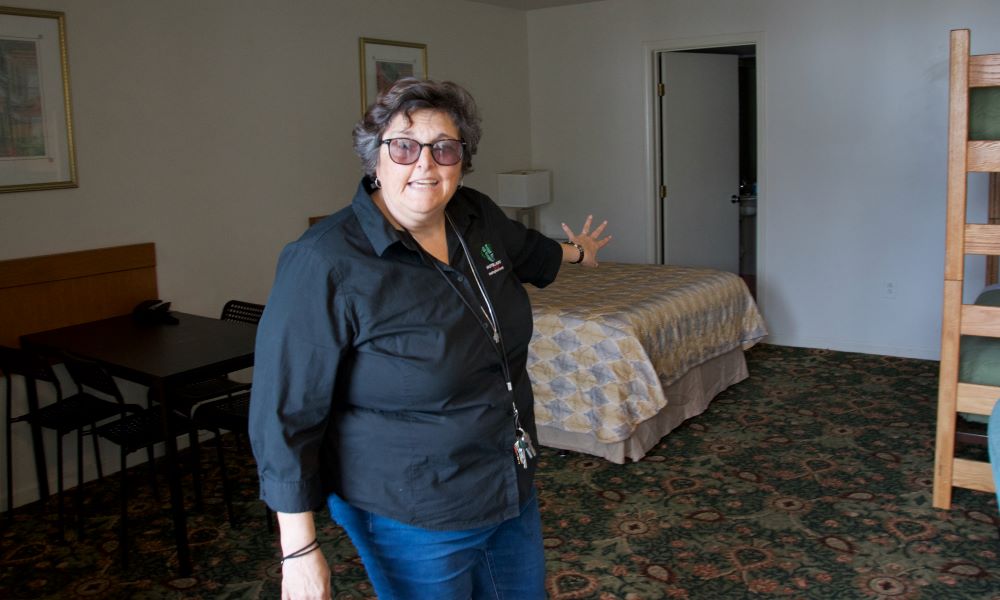 Presentation Sr. Julie Marsh shows the layout of one of the rooms at Hotel Hope, a shelter for women and children experiencing homelessness in New Orleans. (GSR photo/Dan Stockman)

The hotel is another example of the way women religious communities collaborate in the Big Easy. The Sisters of the Presentation of the Blessed Virgin Mary work with the Daughters of Charity*, who have a program to help some of the women get their GED diplomas, and the Dominican Sisters of Peace, who have an after-school program for the children. Guests with health problems can be sent to the Daughters of Charity health system, Ascension DePaul Services of New Orleans. Sisters of the Holy Family and Sacred Heart Sisters often volunteer at the hotel. And, of course, there is the collaboration with the House of Charity.

Guests are provided grab-and-go breakfast items and eat lunch at work or school. Volunteers serve the families a hot meal for dinner.

Marsh said the volunteerism is particularly effective at changing lives of both the volunteer and the person being served because the volunteer "can see the difference they're making."

Specha seems to know everyone in New Orleans and uses those contacts extensively.

She first traveled to New Orleans in late 2005 on a mission trip to rebuild houses after Hurricane Katrina devastated the city. She returned to live there in 2008, eventually running Café Reconcile, a full-service restaurant that gives job training and life skills to 16- to 24-year-olds who are disconnected from society and out of work. The connections she made there led to her becoming board chair of Hotel Hope, a nonprofit that at the time wanted to start a homeless shelter.

By 2014, she had left the board and was executive director. She had been begging Marsh to join her — they had joined the congregation on the same day in 1986 — and that year, Marsh finally gave in.

"I have strong opinions, and I needed someone who was going to push back," Specha said.

Marsh countered that she didn't know anything about housing, but Specha said as long as Marsh knew how to love, she could provide the "radical hospitality" the hotel needed.

They researched models around the country for two years, spent 2016 renovating a hurricane-damaged house, and opened for business in 2017, able to house two families at a time.

"It was our place to practice our model and learn, and boy, did we learn," Specha said.

One of the first things they learned was they couldn't do it alone; with just two of them at the house every day and night, they were burning out fast. So Marsh started contacting Catholic churches in the area and organized volunteers to take shifts at the house 24 hours a day, 365 days a year. In those first two years, they housed 23 mothers and 56 children.

Things were running like clockwork, but they could help just two families a month. They heard the Crescent Palms was for sale — but the price was $1.4 million. The organization had only a little money and the board would not take on debt, which gave them only a few weeks to raise what they needed.

A local philanthropist donated $1 million, the Sisters of the Presentation of the Blessed Virgin Mary gave $1 million, and on the feast of the Assumption in 2018, the nonprofit closed on the sale and owned a hotel. It had been operating right up until the sale, so almost no renovations were needed, and it opened to guests a month later.

And the collaboration continues with many volunteers: A local Catholic parish donates a box of cleaning supplies to every family as they move out, and volunteers watch the children while  mothers attend Saturday morning empowerment classes on toxic relationships, budgeting and goal setting. A "grocery group" donates food, and many service groups give their labor, such as the Creighton students, who spent one day of their spring break preparing a space for a commercial kitchen that had been donated. Students from nearby Tulane University and Southern University in Baton Rouge are also frequent volunteers.

"As sisters, that's what we do best: We spread the word on what's needed, and we invite them to help," Specha said. "And they get to make a difference."

Morin said the students received as much or more than they gave.

*An earlier version of this story gave an incorrect community.