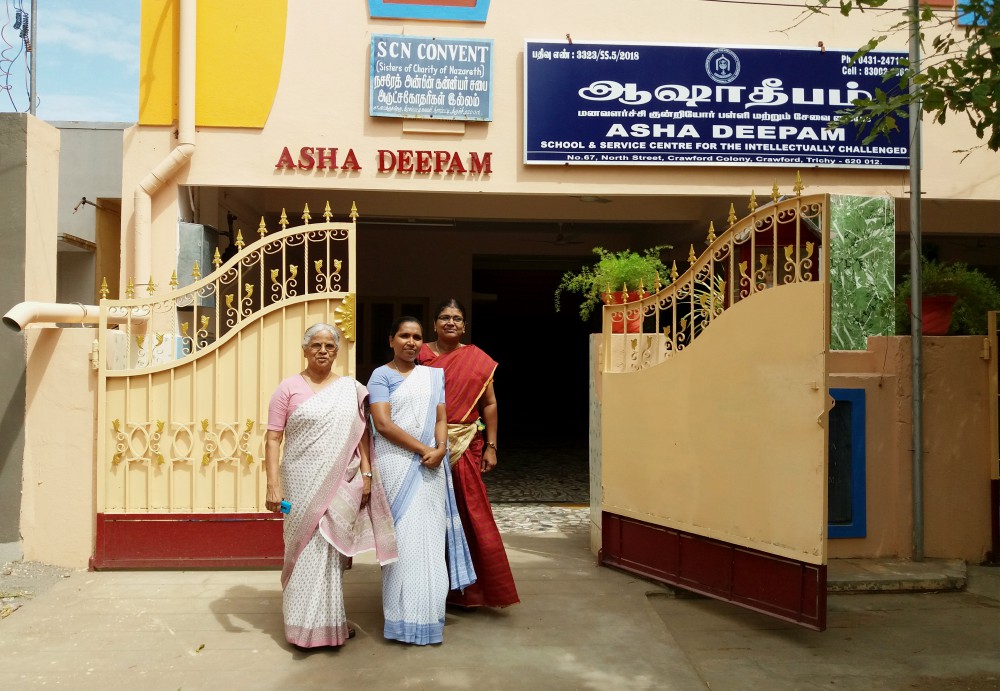 From left: Sr. Rita Puthenkalam, counselor at Asha Deepam and a formator of the Sisters of Charity of Nazareth; Sr. Jansal Pepren, director of Asha Deepam; and Roseline Francis, a senior teacher at Asha Deepam in Trichy, Tamil Nadu, southern India (Courtesy of Joseph Chakravarthy)

John Antony was 9 when his mother brought him to a special school managed by the Sisters of Charity of Nazareth in the southern Indian city of Tiruchirappalli, also called Trichy, in 2008.

His mother cried and pleaded with the nuns to admit him so he could learn to walk and speak. At the time, Antony, who has cerebral palsy, could only mutter and walk with someone's help.

"He also became kind and generous and wheeled his classmates and juniors to their classrooms," said Roseline Francis, who coordinates the school's activities.

Antony is among the several hundred children with physical and intellectual challenges that Asha Deepam has helped become useful members of society, said Francis, a 46-year-old laywoman who joined the school as a teacher when it opened more than 25 years ago.

Francis said Sister Stella Mary, who was trained to teach visually impaired students, had realized the need for a school for such children in Trichy.

Asha Deepam, which started with nine children, now has 32 boys and 14 girls who are taught by three teachers. The students have physical, mental, developmental or intellectual disabilities, such as autism, attention deficit disorder, cerebral palsy and Down syndrome.

"We also found the number of such children increasing," Francis said.

Stars of the school

Asha Deepam aims to identify intellectually and physically disabled children between the ages of 3 and 18 living within a 6-mile radius of Trichy.

Asha Deepam's objectives include providing educational services and training for daily life and social skills and helping the children lead a life with dignity. It also provides diagnoses, medical rehabilitation and supportive services to help them lead an independent life. 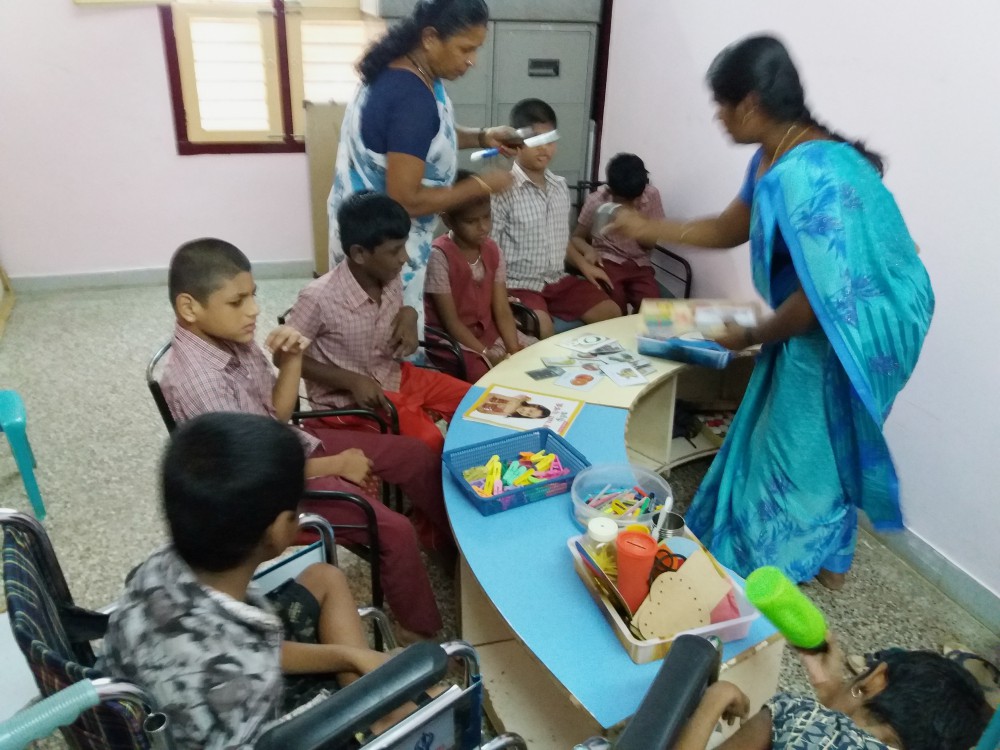 "We are aware that a large number of children in our locality need our services, but we are unable to cater to all," said Sr. Jansal Pepren, Asha Deepam's current director. "This has been one of our challenges."

The school also teaches English and Tamil, arithmetic and social studies as part of the academic activities. Other activities include daily living skills, such as social etiquette, personal hygiene and health management; sports and games; dance and drama; arts and crafts; household activities; gardening; and exposure to environment and community.

In Antony's case, the school encouraged and coached him to take his high school final examinations. He spent additional time in the school to complete his lessons while regularly helping his mother, a street food vender, by pushing her cart for about 1.25 miles. 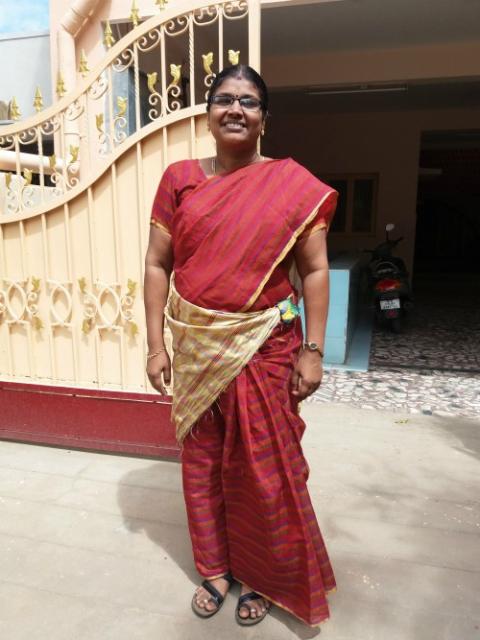 He also wanted to buy a mechanized three-wheeled vehicle to help his mother deliver food to weddings and other social functions in the neighborhood.

"He showed all signs of becoming a successful entrepreneur," Francis said.

Another "star of our school," Francis said, was Tolkappiyam, who "used to remain in his own imaginary world, speaking repetitive and meaningless words," when he joined Asha Deepam at 9.

With training and systematic coaching, he passed the federal government's National Institute of Open Schooling high school examination. Now 17, he can operate a computer, sew clothes and make candles and baskets, Francis said.

Pepren and other nuns who have worked in the school say their great moments come when their students get selected for national and international sports events.

Sr. Sabina Mattappally, who was the director in 2011, accompanied two students to the Special Olympics in Athens, Greece.

Bairavi, who joined Asha Deepam as a 6-year-old, improved her speaking ability and became a good dancer and sketcher. She also learned cooking and stitching. Now 25, Bairavi leads a successful life with her husband and son in Trichy, Francis said.

Priya, now 23, is also married and lives in a nearby town. Francis said she was just 4 when she joined the school. She soon proved good in studies and sports.

Two other students, Joseph Chakravarthy and Kowsalya, have also participated in international sporting events. Kowsalya, who has intellectual disabilities, won a silver medal in hockey at the 2009 Special Olympics in the United States. Chakravarthy medaled in cricket in 2013 in Australia.

Francis said Chakravarthy had been a "slow learner" when he joined the school at 12, and by the time he left at 19, he had become a multitalented person. Today, he is a photographer, drives a van and manages a convenience store. He also works as a computer operator at Asha Deepam.

"All these children were my students," said a visibly proud Francis.

According to Turin Martina, associate professor of rehabilitation science at the local Holy Cross College, Asha Deepam does "yeomen service" for children with physical and intellectual disabilities. 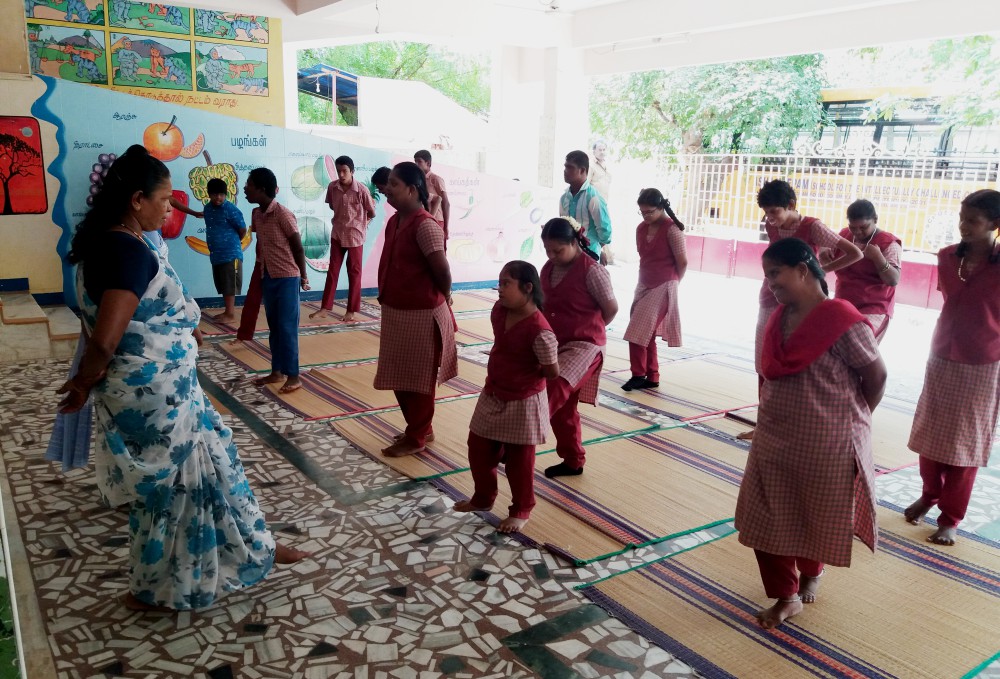 The school curriculum gives great importance to sports and games, and the teachers prepare children for local, regional, national and international sports and games competitions, said Martina, who has been an associate of the school for many years.

Francis said their services go beyond the school premises. They counsel parents who discriminate against their children with intellectual and physical disabilities.

"We conduct awareness programs three times a year for such parents to convince them not to discriminate [against] their handicapped children and make them feel unwanted," she said.

She said the teachers are convinced they should conduct such programs on a wider scale, involving more parents from the school's vicinity.

"We seriously consider making it part of our activities," she added.

Pepren said her congregation supports and encourages their work. The congregation's superior general, based in Kentucky in the United States, visits the school every year, "giving us a great morale booster."

The congregation is also the major source of funding for the school, she added. 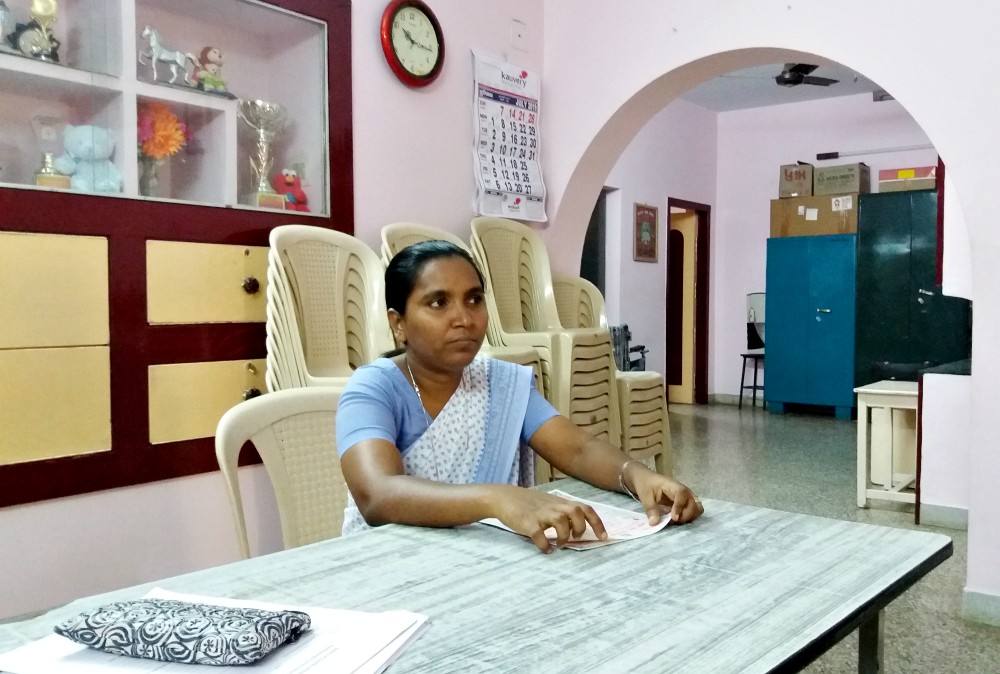 Sr. Teresa Kotturan, U.N. representative for the Sisters of Charity Federation, said when she was the Indian provincial of the Nazareth nuns from 1999 to 2007, she took "a keen interest" in Asha Deepam.

"We provided the best we could," she told GSR in an email.

Sr. Rita Puthenkalam, 77, who serves as a counselor at Asha Deepam and a formator of the congregation, said Asha Deepam teachers such as Francis are their greatest assets.

"They are a committed team who go out of their way to teach and train the children to make them useful citizens in society," she told GSR.

Gladis Raj, whose son has cerebral palsy and is a student at the school, told GSR that the teachers sacrifice a lot for the children.

"Their commitment and devotion to their work is commendable," she added.

Rajaratnam Antony, 58, a Trichy-based marketing executive, said what the school and its staff do is a challenging task.

"Many former students are employed and well-settled in life," he told GSR.

Francis said she thanks God for the changes she and others could bring to the children.

"I have realized that any piece of bamboo can be made into a flute if it is drilled properly," she said. "Likewise, any special child can become a successful person if he or she is trained and guided."