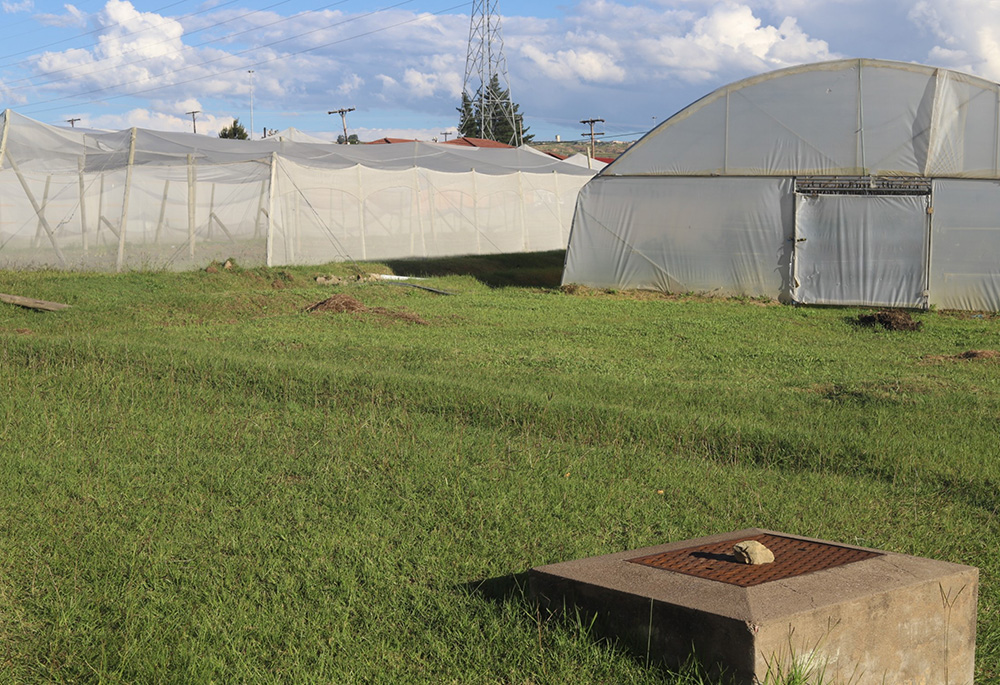 The Sisters of St. Joseph of St.-Hyacinthe manage these greenhouse structures at their convent in Sekamaneng, a town located 4 miles from the capital Maseru. The sisters plant vegetables in the greenhouses, which they sell and use to support the community around them. (GSR photo/Doreen Ajiambo)

Faced with reduced acreage for farming because of the surrounding mountains and unpredictable weather conditions, Sr. Cecilia Sekhopha turned to greenhouse farming to increase food production and earn extra income for her congregation.

Every morning, Sekhopha gets up before the sun and hurries to her greenhouses to check if her vegetables need water, vitamins or more light. After watering her vegetables and ensuring that the moisture is controlled, she begins to serve her clients who come to buy her produce, including tomatoes, cabbage, spinach, onions and kale.

Greenhouse farming is a modern practice of agriculture where farmers grow vegetables and fruits year-round within sheltered transparent material made of glass or plastic. The technology protects crops during dry and rainy seasons and produces high yields.

Sekhopha, a member of the Sisters of St. Joseph of St.-Hyacinthe, is the only person practicing greenhouse farming in Sekamaneng, a town located 4 miles northeast of Maseru, the country's capital. Apart from feeding residents of Sekamaneng, she also sells some of the crops produced in the greenhouses in nearby markets.

"When I started this project, my objective was to help hungry communities living around us," she said. "Most people around here are farmers, but the weather is not favorable. They produce very little, which is just for food. But the food doesn't even last until the next season. Because of this, we had many people coming to us frequently to ask for food." 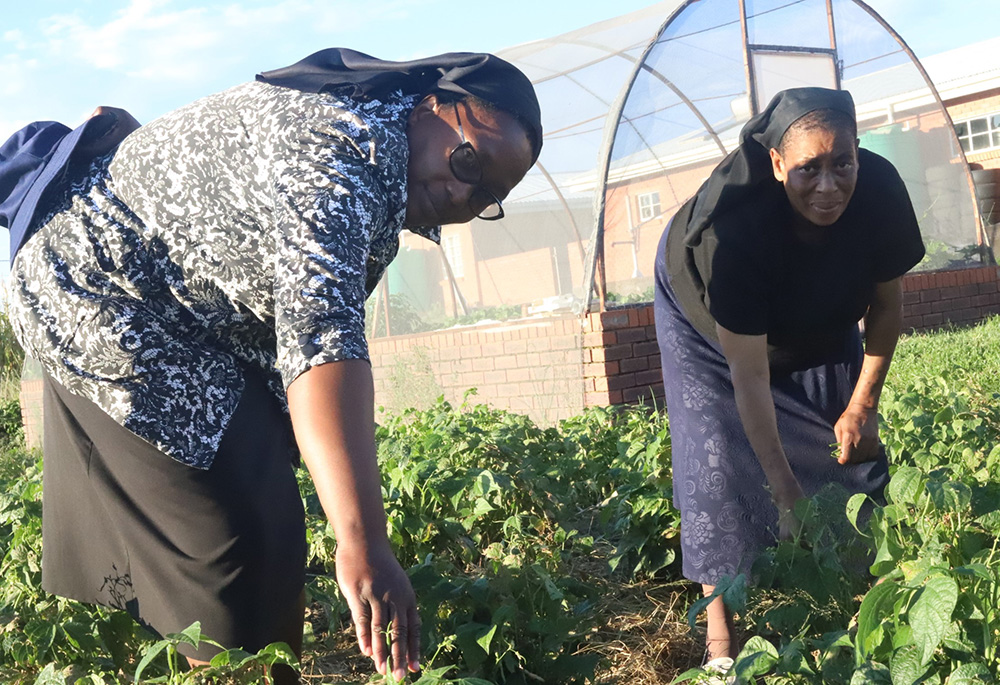 Srs. Lylian Mphutlane, left, and Cecilia Sekhopha of the Sisters of St. Joseph of St.-Hyacinthe tend to their vegetables March 2 on their farm in Sekamaneng, a town located 4 miles from Lesotho's capital, Maseru. (GSR photo/Doreen Ajiambo)

Lesotho, a small mountainous country enclosed within the territory of South Africa, continues to face environmental challenges in the agricultural sector, including climate change, overgrazing, erosion, and land degradation because of floods and droughts.

Although the climate conditions in the southern African nation favor livestock production, over 70% of Lesotho's population depends on agriculture as their main source of livelihood despite only 10% of the land being arable, according to findings published by the World Bank Group.

The situation has aggravated hunger and poverty in this landlocked country of over 2 million people, as many residents cannot grow and harvest enough food for their families. More than half of the population in Lesotho lives on less than $1 a day, while approximately a quarter of the population is food insecure, according to the data from World Food Program.

The circumstances forced Sekhopha to find a solution to the country's food problem. In 2015, she started her greenhouse project at her convent in Sekamaneng after receiving greenhouses from the government.

"When the government announced that they would give free greenhouses to people interested in farming, I decided to try my luck by applying for one," she said. "Luckily, I was successful, and I received three of them. But the challenge was I had no idea how to run them. Therefore, I had to undergo a six-month training, which the government sponsored."

However, her journey wasn't easy. 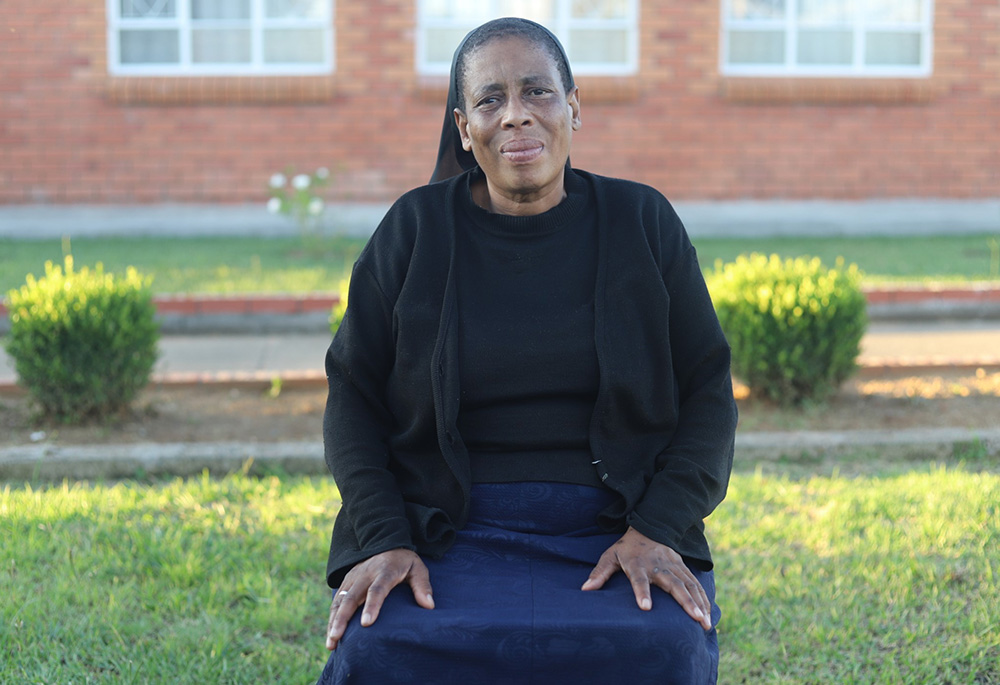 Sr. Cecilia Sekhopha of the Sisters of St. Joseph of St.-Hyacinthe is the founder of the greenhouse project in Sekamaneng, a town located 4 miles from Lesotho's capital, Maseru. (GSR photo/Doreen Ajiambo)

Sekhopha, 55, studied agriculture at St. Elizabeth Training Institute in Mohale's Hoek in southwestern Lesotho from 1995 to 1998. But after graduating, her congregation gave her another responsibility of being a formator for their young sisters and, later, a secretary. However, she did not give up on her dream.

"I have always wanted to be a farmer. That's why as a young sister, I chose to train as an agriculturalist," she said. "To keep my dream alive, I used to plant vegetables here at our farm to provide food for the congregation, and I did this during my free hours."

Sekhopha said she ventured into greenhouse farming after retiring as a secretary in 2015 because she believes it holds the key to her country's agrarian future. A small farm can produce more, which translates to more profit, she said. Greenhouses also protect crops from weather issues like frost and wind, use less water, protect plants from pests, and control sunlight.

"The project has been a success. For now, I have been able to provide enough food for the congregation and the community," she said.

Sr. Lylian Mphutlane, who works with Sekhopha, said the greenhouse project earns her congregation at least $2,000 from the sale of each harvest, which is twice a year. 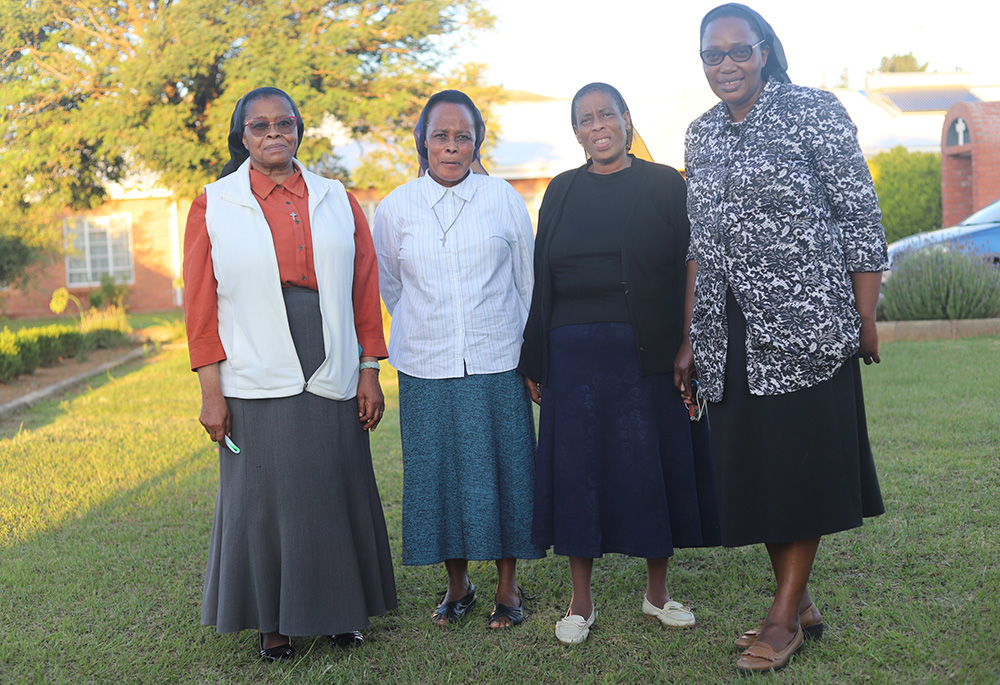 From left: Sr. Ann Lereko, Sr. Germina Maparisane, Sr. Cecilia Sekhopha, and Sr. Lylian Mphutlane are all members of the Sisters of St. Joseph of St.-Hyacinthe at their convent in Sekamaneng, near Maseru, Lesotho. Lereko is the provincial superior. (GSR photo/Doreen Ajiambo)

"We usually plant seasonally, especially during summer times. We sell from the surplus we get, and the others are given out as donations to the community," she said.

Mphutlane encouraged residents to embrace greenhouse farming to deal with climate-related problems that lead to poor harvest and, thus, hunger.

She said the greenhouse technology is good for the country, which lacks enough agricultural land. For example, she said, a single greenhouse that occupies a quarter of an acre can earn more than $3,000 in one season, more than four times what an average small-scale farmer makes cultivating 2 acres of land in an open field.

The sisters said their greenhouses have been able to employ dozens of people from the surrounding communities. They also provide training to the people so they can start and manage their own greenhouses. The training involves record-keeping, how to cultivate with a greenhouse, business management, and post-harvest handling.

"Our greenhouses are proving to be very beneficial to the community and us," said Mphutlane, a member of the Sisters of St. Joseph of St.-Hyacinthe. "We have many families that are benefiting from us. We have employed some people on our farm while others are now running vegetable businesses since they buy from us at a lower price. Soon, those we have trained will start their greenhouses and expand our reach." 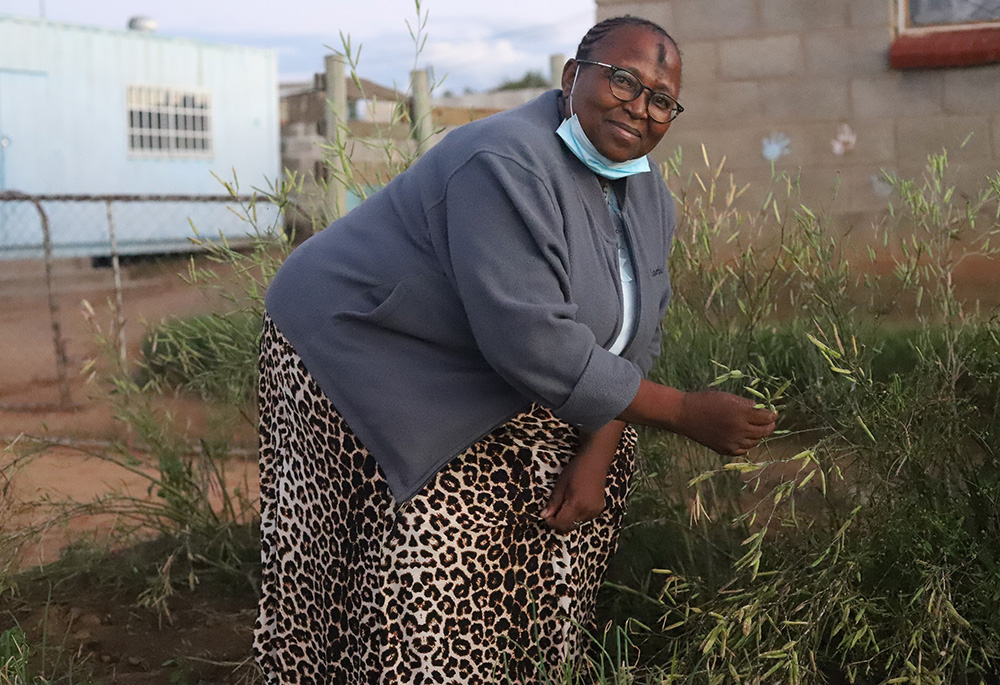 'M'e Neo is a beneficiary of the Sisters of St. Joseph of St.-Hyacinthe's greenhouse project. The sisters provide farming training to members of the community in Sekamaneng, a town located 4 miles from Lesotho's capital, Maseru, so that they can start and manage their own greenhouses. (GSR photo/Doreen Ajiambo)

'M'e Neo, 60, is a beneficiary of the sisters' greenhouse project. She is the founder of God's Love Centre in Sekamaneng, which cares for orphaned children. She said the sisters have continued to support more than 20 children at her center by distributing food and other items.

"The sisters' initiative has saved the community from extreme hunger," she said. "Running a children's home requires money, which is always not there. The sisters are regularly supporting children at the center by donating food. At least, I am sure children cannot go to bed hungry, and we can use the money we receive from donors to cater for other needs, like school fees."

Neo said the sisters trained her on farming methods and how to cultivate a greenhouse, but she has not been able to start her own because she lacks the money to buy a greenhouse. She says erecting a greenhouse is expensive and can cost more than $2,000 for a structure covering 200 square meters (2,150 square feet).

"The sisters have equipped me with the skills I need to start a greenhouse, but I have no money to buy one," she said. "The cost is too high for the poor, who are the majority in this country. We appeal to the government and donors to assist us with greenhouses so that we are able to cultivate and have enough food for our families."

Sekhopha agreed, saying the government should help farmers get greenhouses if they want to end hunger and poverty in the country.

"Our future for sustainable food production is in greenhouse farming, but it's expensive to afford and maintain it," she said.